You are here: Home / Featured / Crowded beaches underscore the lack of coastal access 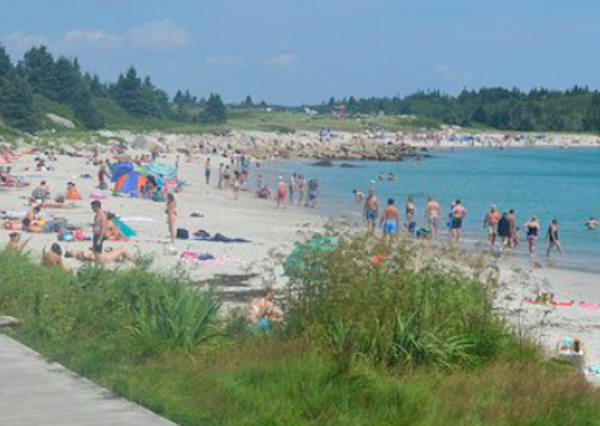 Even when there’s not a pandemic, Crystal Crescent Beach can get crowded. Photo: TripAdvisor.

As COVID-19 forces people to re-consider basic aspects of their lives — work, school, the role of government — there’s a question particular to Nova Scotia to contemplate: How easily, in a coastal province, we can actually access the ocean?

Two weeks ago, as normal life began to shut down and Nova Scotians flocked to beaches for weekend distraction, many people pounced on pictures of long lines of cars at Crystal Crescent Beach and elsewhere as a sign of people failing to respect social distancing.

The province has now closed all provincial parks and beaches. Municipalities have taken similar measures.

But while these measures are necessary to protect public health, some are asking whether the images of crowded beaches — and the government restrictions that followed — are also highlighting the ways in which Canada’s Ocean Playground is not living up to its name.

“Right now, not being able to go for a nice walk by the ocean is a reasonable sacrifice to make,” said Tony Charles, a professor in Saint Mary’s University’s School of Environment. “The question in the long run is, What does it teach us about how we’d like the province to operate?”

In a province where nearly 90 % of 13,300 kilometers of coastline are privately owned, coastal access questions have a long history.

“It’s scandalous the lack of access to the coastline, to beach resources,” said Chris Trider, who worked as a provincial park planner for over two decades, including on coastal protection and access.

Part of Trider’s role, when he worked with the province, was to develop plans that would increase access to, and recreational opportunities on, the coast, so that the arrival of a sunny summer day — or the first day of spring, in the midst of a pandemic — wouldn’t result in everyone flocking to the same handful of beaches.

“This spreads out the impacts as well, because these big one-day pushes on places, you know, they have a lot more environmental damage as a result, too.”

But the province hasn’t fully realized all of those plans, Trider said, including at one of his former projects, the Cole Harbour-Lawrencetown Coastal Heritage Park System, where there are access concerns to the Lawrencetown headland, and deteriorating infrastructure at several beaches.

“There wasn’t enough [infrastructure] to start with, and now there’s been a deterioration of what was provided, and then there were a large number of components that were never completed.”

The province recently initiated upgrades to some of the infrastructure in the Cole Harbour-Lawrencetown Park System.

Meanwhile, attempts to address coastal access in a more systematic way have foundered, as with the Dexter government’s coastal strategy. The never-realized strategy included public coastal access as one of six priority areas, and in public consultation on the strategy, 76% of surveyed Nova Scotians said that coastal access was a concern.

But that strategy evaporated when the Dexter government was turfed in 2013, and now, nearly a decade later, coastal access fights continue to spring up every year like a provincial game of whack-a-mole.

Since starting as the Ecology Action Centre’s coastal adaptation coordinator in 2018, Nancy Anningson said she gets calls every summer about access disputes on the coast, many of which are caused by a property changing hands, leading to a community’s traditional path to the water being cut off.

To review just some of those currently complicated situations reads like a roadmap to the province’s coastline: Cow Bay, Hell Point, Clarke Head.

The incoming Coastal Protection Act won’t help with these, as it doesn’t address the question of coastal access. Anningson thinks this was intentional, to avoid repeating what happened with the last government’s attempt at coastal regulation.

“I think when you try to include too many very challenging issues you cannot move something forward and we desperately needed to do something to stop putting homes…in unsafe places,” she said. “If we had tried to attach it to access I suspect it would have been a much slower road.”

Yet there are good reasons for the province to address this — and not just because the lack of clear guidance makes it likely these conflicts will continue, pitting neighbors against each other and limiting who gets to reap the benefits of being by the water.

Looming over all of this is the threat posed by climate change. Erosion and sea level rise are nibbling and sometimes chomping away at the coastline, undermining traditional trails and driving the public further onto private land.

Depending on the approach, attempts to address climate change impacts on the coast could make access worse. In Lawrencetown, surfers are lobbying against a seawall that the Department of Transportation and Infrastructure Renewal is proposing to protect highway 207 from erosion and storm surge.

Vic Ruzgys, chair of the Surfing Association of Nova Scotia’s Coastal Access Committee (which also advocates for hikers, birdwatchers, and other users), said they’re concerned the seawall could make the surf break at Lawrencetown point — and the land around it — inaccessible.

“We think there’s other options besides building a giant seawall, which could potentially destroy that end of the beach at Lawrencetown park, it could change or destroy our surf break, and will certainly eliminate safe and easy access to that iconic piece of property,” he said.

Instead of a seawall, Ruzgys said they’ve suggested moving the road and using the area where the road is currently located to construct a park, ensuring safe access to the water.

“It all comes down to dollars and cents,” he said.

In an email, a spokesperson for TIR said climate change is affecting coastal roads, including route 207, and that the department is looking at options.

Just as climate change may force a different approach to managing coastal access, or risk increasing conflict, so the situation created by COVID-19 could be an opportunity to reconsider Nova Scotia’s approach.

Given that the only people who can currently get to the ocean are, for the most part, people with coastal property, uneven access to the coast is an inequitable but unavoidable part of a social distancing.

But when this is over, and Nova Scotians can once again go to the beach, do they want to do so in a way that repeats the scenes of mid-March — with the majority crowding together at a handful of public sites — while private landowners dictate access everywhere else, or is a different approach possible?

SMU professor Tony Charles said there’s a chance that, having lost access to the ocean temporarily, Nova Scotians will be motivated to demand the province do things differently.

“When you can’t have something, you perhaps really learn how valuable it really is.”