You are here: Home / Environment / Court to decide the future of Owls Head 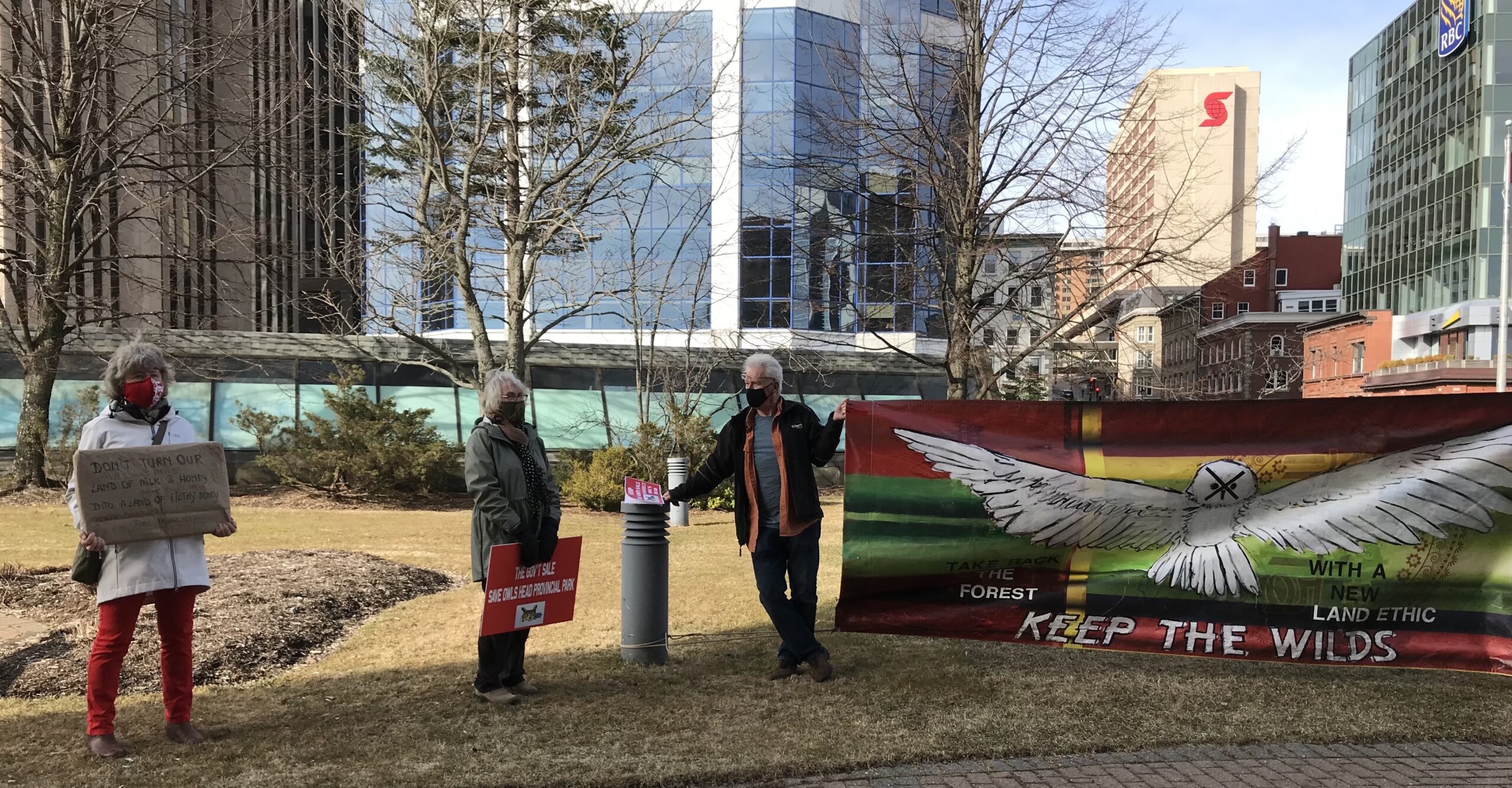 Demonstrators outside the Law Courts on Friday. Photo: Jennifer Henderson

Yesterday, Supreme Court Justice Christa Brothers heard an application or a judicial review of “the Minister of Lands and Forestry’s decisions to de-list Owls Head Provincial Park from the Our Parks and Protected Areas Plan and to enter into an agreement to sell the land to a private company, Lighthouse Links, for development into a golf resort,” explain East Coast Environmental Law in a press release:

The applicants, Robert Bancroft and the Eastern Shore Forest Watch Association, have argued that the province should have consulted the public before de-listing Owls Head. The park, while not legally designated under legislation, had long been thought to be a park. Additionally, it has been managed by the Department as a park for many years under its Parks Program.

“For forty years the people of Nova Scotia have trusted successive governments which assured us that Owl’s Head was protected as a Provincial Park. Governments must be required to tell the truth about public land, and to consult the public when such a major decision is contemplated”, says Barbara Markovits, a director of the Eastern Shore Forest Watch Association.

The outcome of the judicial review could have wide-ranging consequences for the public’s interest in having its parks and specially protected Crown lands, which are managed for the benefit of present and future generations, set aside in favour of private development.

Bob Bancroft pointed out the need for governments to act more in the public’s interest as a key issue. “The secrecy of this government in de-listing this park to offer it for private sale at a bargain price, and its cavalier attitude about transforming a biologically rare coastal site into golf courses that will pollute the ocean, shines a spotlight on elected officials who are not acting in the public interest”.

Justice Brothers has reserved her decision.

Meanwhile, Premier Iain Ranking appears not to be considering reversing the de-listing of Owls Head.

“On the plaza of the Law Courts, demonstrators have convened in support of the judicial review and they have done so with a sense of great hope,” said NDP leader Gary Burrill during Question Period yesterday.

“There is hope that the premier will show that his words about the environment and the value of land protection are in fact signifying something real. And he will show that by reversing his government’s de-listing of Owls Head. Will the premier tell us whether he plans to disappoint them?”

“What I intend to do is continue to look at sites across the province with the Lands and Forestry Minister and Minister of Environment,” replied Premier Rankin. “They have a mandate to look at identifying sites from the Parks and Protected Areas Plan, as we have done in the past. That referenced land (Owl’s Head) was not protected. We are continuing to listen to communities and consult with communities and that’s what we are going to do.”