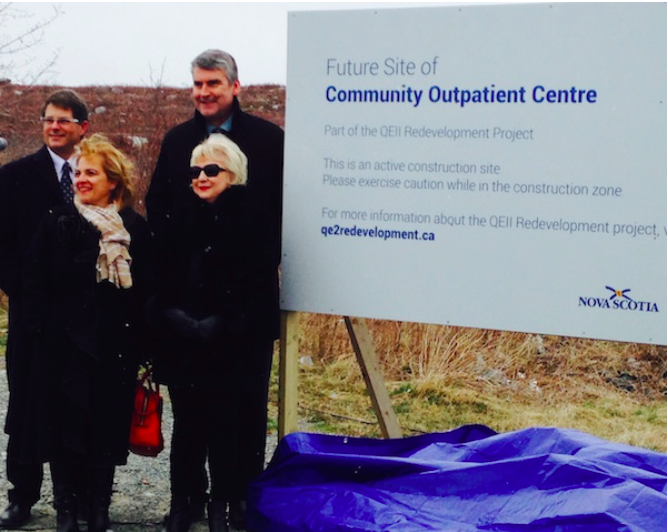 The province’s purchase of 15 acres in the Bayers Lake Business Park to build a new Community Outpatient Centre was supposed to be a good news announcement for the McNeil government today. Certainly for those interested in seeing a replacement for services housed in the leaky and decrepit Victoria General Hospital — where you can’t drink the water and where some of the sickest patients continue to receive care — the prospect of moving to another location some diagnostic tests, dialysis, and patient consultations with specialists is a hopeful sign.

Premier Stephen McNeil was on hand to make the announcement alongside a senior vice-president with the Nova Scotia Health Authority. Health Minister Leo Glavine was apparently busy elsewhere.

McNeil was quick to point out that the Centre’s Bayers Lake location — behind Home Outfitters on Chain Lake Drive — is near both Highway 103 and Highway 102.

“We often hear Nova Scotians say traffic and parking are major concerns when travelling to the VG site of the QE2 Health Sciences Centre, and this location will provide convenient access for many people who travel to appointments from out-of-town,” said McNeil.

True. But then the good news announcement took a sharp turn. CBC reporter Jean Laroche asked the Premier what he thought about the fact the province paid $7.5 million for property owned by Besim Halef of Banc Developments. Halef is a successful developer who also contributed $3,000 to the provincial Liberal party in 2013 and  is a board member of the QE2 Health Sciences Centre Foundation, the fundraising arm for the hospital.

“It had nothing to do with it,” said the premier, in response to any potential whiff of conflict-of-interest. “We don’t see a conflict. What we focused on where was the best site for access. To be frank, I didn’t even know who owned this site.”

McNeil said the Department of Transportation and Infrastructure Renewal checked out 14 potential sites before narrowing the cabinet’s choice to two options, both at Bayers Lake. Interestingly, McNeil says he was told the other option was the former Rona hardware boxstore and that parking access wasn’t as favourable there as at the blind or unidentified site owned by Halef.

Nova Scotia NDP leader Gary Burrill was on-site for today’s announcement and he was critical on two fronts.

“This location is inconvenient beyond belief for people who don’t have a car,” said the United Church minister. “It is troubling from that point of view and it is troubling from the point of view of the Liberal party’s record. They’ve got a well-established record of making decisions in ways that are particularly helpful to their inner circle, so this is of great concern.”

It should be pointed out that while Besim Halef and his son Alex ($700) were both contributors to the provincial Liberals in 2013, Besim Halef also donated $2,000 to the Progressive Conservatives in 2006 — Bedford PC candidate Len Goucher got the donation from the senior Halef.

Today’s announcement was a signal the McNeil Liberals are paying more than lip service to the promise to demolish the VG in 2022 and are planning multimillion dollar renovations and new buildings to house its present services.

Paula Bond, the vice president in charge of Integrated Health Services for the Nova Scotia Health Authority and a former ER nurse for 25 years, said the current government has done more to move the project along than any other for which she’s worked.

As one example, the government is spending $3.8 million to outfit an unused operating room at the Hants Community Hospital in Windsor that will eventually be used for orthopedic, general, and plastic surgery, doubling its capacity to nearly 800 operations a year.

The proposed Bayers Lake Community Outpatient Centre will be about the same size as the Cobequid Health Centre in Sackville (100-150,000 sq ft) and include some of the same services (Emergency and Physiotherapy). It will be used by specialists for patient consultations and dialysis.

The exact composition of outpatient services Bayers Lake will provide still has to be finalized with the help of the government’s hired master planners, Kasian Architecture.  Their $1.9 million report is due at the end of this year and will include a preliminary cost estimate to replace services now at the VG site.

The Outpatient Centre could be built through a P3 or Public Private Partnership, the Premier said a tender will be awarded later this spring to study the business case for using P3 to build new facilities or expand the number of operating rooms at the Halifax Infirmary and Dartmouth General.

Site preparation work at the future home of the Bayers Lake Community Outpatient Centre could start in July 2018 — well after the next provincial election.