You are here: Home / Commentary / Coming to terms with the complicated legacy of Gerald Regan 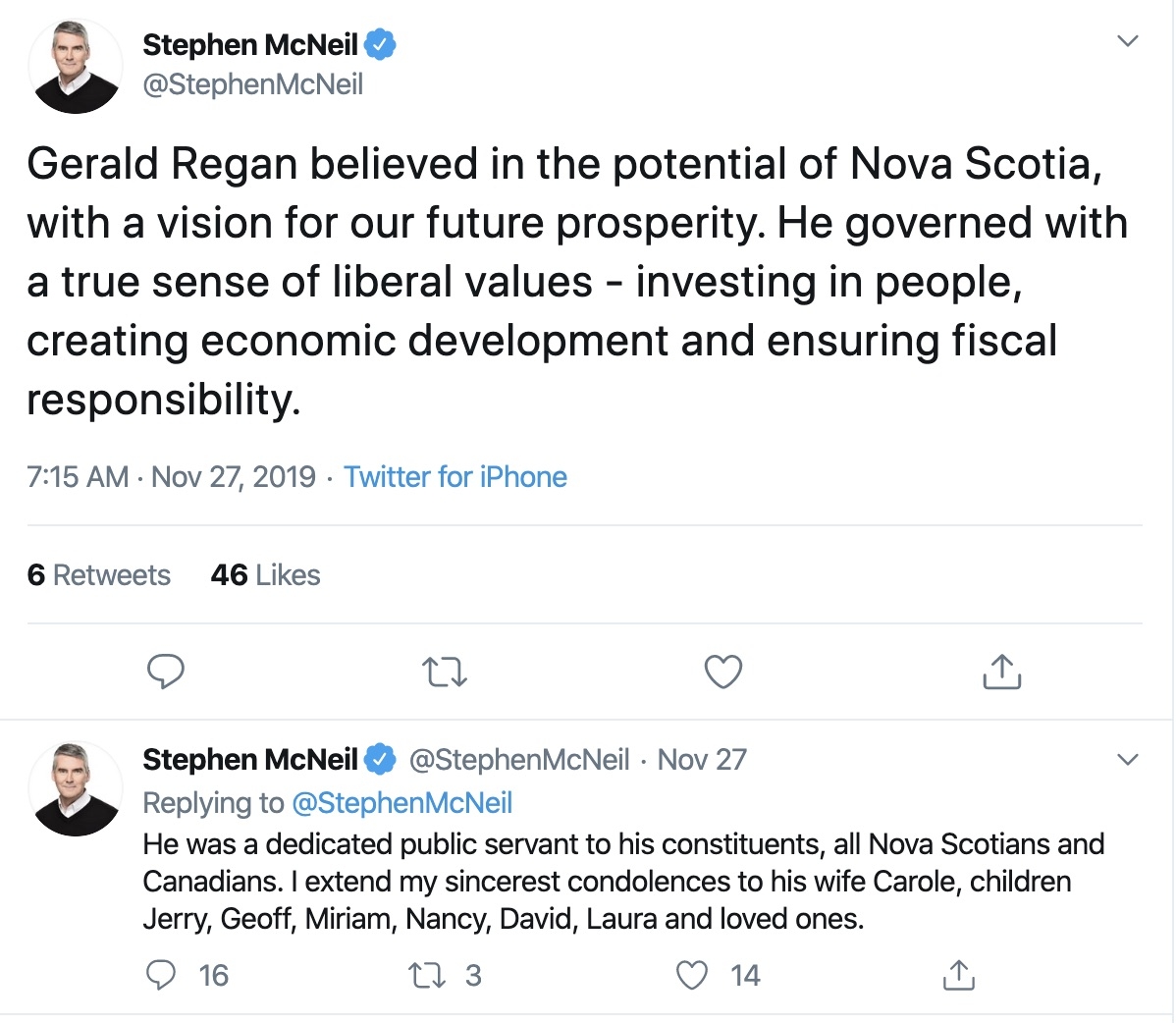 “I think you know every Canadian knows you’re guilty.
And you can take that to your grave!”

As the author of “that book about”… I spent much of last week being interviewed by journalists, all of whom — like me — were struggling with the question of how to write about the complicated life, legacy and death of Gerald Augustine Regan.

Regan — who was 91 when he died last week — served two terms as premier of Nova Scotia (1970-78), was a federal member of parliament in two different decades (1963-65 and 1980-84) and held a variety of national cabinet portfolios: labour, international trade and (ironically, in light of what follows) the status of women…

On the face of it, his seems like a career well worth remembering. And celebrating.

But then, of course, there are those other markers of a life much less well lived. Gerald Regan also stood accused of sexually assaulting more than three dozen women over the course of 40 years, dating from his earliest days as a young lawyer in Windsor, NS, to his post-politics life as a globe-trotting multinational corporate board member. Those allegations included rape, attempted rape, and forcible confinement.

How do you reconcile those two collections of true facts? You probably can’t. No matter what you write, there will be those who claim you’re either rinsing Regan’s black heart in the cleansing stream of his passing or dancing gleefully on his grave.

Most news reports I saw got it about as right as those complicated realities — and our changing times — allowed.

The same can’t be said for Premier Stephen McNeil. In his official statement and on Twitter, you would never have even guessed at Regan’s darker side:

Gerald Regan believed in the potential of Nova Scotia, with a vision for our future prosperity. He governed with a true sense of liberal values — investing in people, creating economic development and ensuring fiscal responsibility.

He was a dedicated public servant to his constituents, all Nova Scotians and Canadians. I extend my sincerest condolences to his wife Carole, children Jerry, Geoff, Miriam, Nancy, David, Laura and loved ones.

I think I understand the rationale; Regan was, after, all our premier, and his family deserved both an acknowledgement of his public service and our condolences on his passing.

I can even hear the excuse-making splitting of hairs that must have gone on in the process of crafting this see-no-evil tribute: although Regan may have been accused of many crimes and was even tried in the courts for the worst of them, a jury did find him “not guilty,” so why should we now rehash what the courts have already decided?

But that argument must smack up against another, more compelling reality. Almost no one who has examined, in even a cursory way, the mountain of damning evidence against Gerald Regan believes he was not guilty of at least many of the many charges against him.

His reputation in the court of public opinion has been forever damned since the morning of Dec. 18, 1998. The jury — which had actually heard only a sliver of the most serious evidence against him and all of that, even the most peripheral, relentlessly, often spuriously attacked by Regan’s bullying defence lawyer Eddie Greenspan — had retired to begin its deliberations. With the jury suitably sequestered, the judge finally publicly unleashed thousands of pages of previously secret evidence from Regan’s 1996 preliminary hearing and from the case’s many pre-trial arguments. In mind-numbingly similar and soon-to-be familiar-to-Canadians testimony, three dozen women — most of whom didn’t know each other, who’d never even met — testified to what Gerald Regan had done to them at different times and in different places over four decades.

In Premier Stephen McNeil’s blandly tone-deaf tribute to his late predecessor, those women’s courage — their public service — went unacknowledged. Some of them have since died, with not a whisper of public condolences for their sacrifice.

They weren’t the only ones, it is certain, whose lives were changed forever — and for the worse — by the actions of our 19th premier.

Again, as the author of that book about — now more than 20 years old — I still frequently get emails and letters from other women who were too afraid or too unsure of being believed at the time to come forward, and now want nothing more than to have their truth acknowledged.

There were, unsurprisingly, more such letters this week, including this email from an 82-year-old woman now living in California.

My family who live in NS just contacted me to let me know of the death of Gerald R.

I was one of the children (15) who was raped by this man. I was aware of the trial that came about but did not make the effort to go to NS as I was too frightened to do such a thing. Of course, you know how hard it would be to convince anyone of what had happened (not even my own parents) because he was [so well-known] and I was just a kid who liked skating at the rink in Kentville, along with my friends…

Nothing changes for me except for more acknowledgement of what did happen.

Which is why it will never be enough — and never good enough — for any of us to acknowledge only one side of the complicated legacy of Gerald Augustine Regan.