You are here: Home / Featured / Cheques for mining propaganda, but not for corporate registry

About a week ago, one of this province’s most active investigative citizens, Stacey Rudderham, contacted me to say she “got curious” when she heard that uranium exploration, which has been prohibited in the province since 1981, was back on the provincial agenda, after the Progressive Conservative caucus decided to it should be discussed by the Standing Committee on Natural Resources and Economic Development.

Sean Kirby, executive director of the Mining Association of Nova Scotia (MANS), was to be one of the witnesses making presentations and taking questions from Committee members (in fact Kirby and two other MANS men were at the table, as I wrote here).

Rudderham told me that MANS efforts to get the province to overturn the ban on uranium exploration and mining prompted her to “do a little digging” to see how much the people of Nova Scotia, via the provincial government, have given to MANS in recent years.

Then, she said, she found something interesting: according to the province’s Registry of Joint Stocks database, the Mining Association of Nova Scotia defaulted on its payment in 2013. 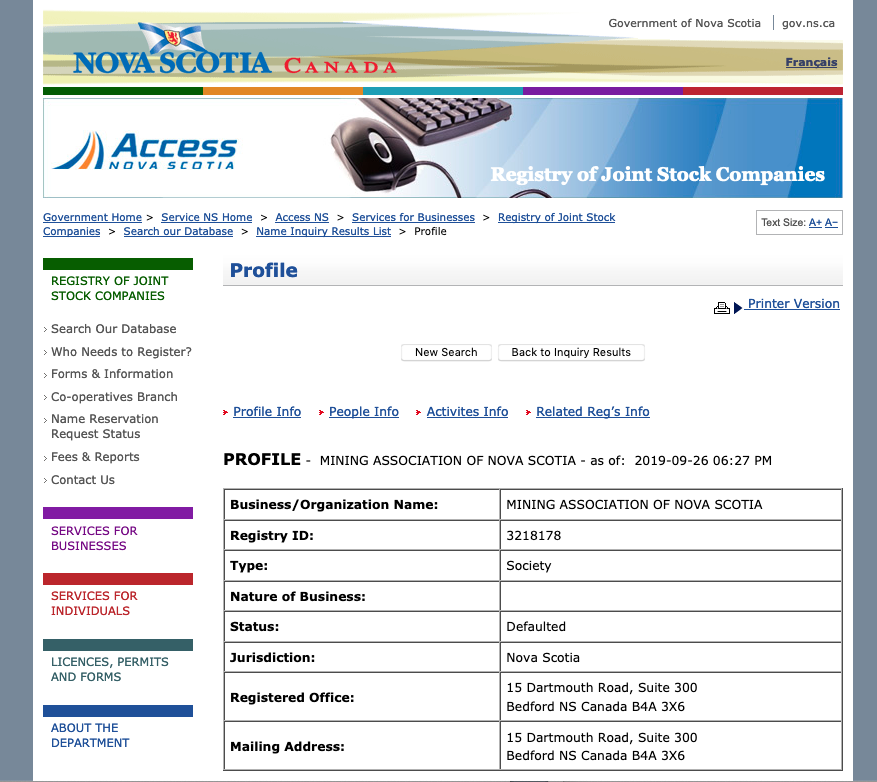 Screenshot from the Registry of Joint Stock Companies website, September 26, 2019.

At that time, the address of the Mining Association was given as 15 Dartmouth Road in Bedford, and it had 19 directors.

One of those directors, Rick Horne, is the chair of the MANS board today. Neither the current executive director of MANS, Sean Kirby, nor Sarah Kirby who is listed on the MANS website as “Director of Government Relations and Communications,” were directors at that time.

Today, MANS headquarters appears to be the Kirbys’ home in Ingramport, Nova Scotia.

The Mining Association of Nova Scotia was incorporated under the Societies Act in 2007 and was Defaulted for Non-Payment of their annual registration fee in 2013. It is up to the entity to keep their registration in good standing and pay their fees each year. There is no way for us to know or search whether the association or its members incorporated a new society for the same purpose. If they did the name wouldn’t be similar as we would not have allowed 2 societies to co-exist with the same (or substantially the same) name.

According to the Societies Act of Nova Scotia:

17. Every society shall have a registered office in the Province to which all communications and notices may be sent and at which process may be served on the society, and shall file with the Registrar notice of every change of situation of that office within fourteen days of the change.

18. Every society shall maintain a register of its members and shall enter therein the full names of the subscribers to the memorandum and the full name of every other person who is admitted as a member of the society, together with (a) the address and occupation of every such subscriber and person; (b) the date on which each person is admitted as a member; and (c) the date on which any person ceases to be a member.

So there it is. The Mining Association of Nova Scotia, with a whole new Board and a new address since it defaulted on its registration six years ago, has not renewed its registration and filed any of these changes with the province.

In addition, that would also mean it hasn’t paid the “annual registration fees determined by the Governor in Council.”

The annual registration fee for a society is $31.15.

Yesterday afternoon I called Sean Kirby and left a message, and also sent him an email, asking why MANS had not renewed its registration with the province. So far I have had no reply.

What does it matter if MANS is in default?

As an employee of MANS, Sean Kirby is a registered lobbyist in Nova Scotia, and MANS itself says it “represents companies in all areas of mining and quarrying: exploration, discovery, development, production and reclamation as well as consultants and suppliers to the industry.”

And anyone who has paid attention to the many op-eds that Kirby has written in recent years pushing for everything from mining and quarrying in protected wilderness areas, and most recently his appearance before the Standing Committee on Natural Resources and Economic Development to campaign for a change to legislation to permit uranium exploration and mining in Nova Scotia, knows that MANS is highly visible and vocal in its efforts to promote the interests of the mining industry. 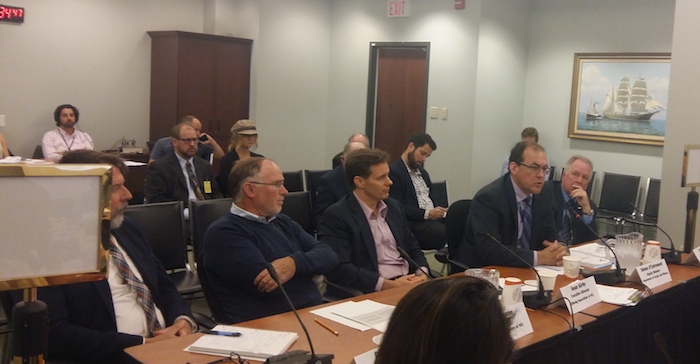 Still, some might ask whether, in the greater scheme of things, we should worry that MANS has been operating in a state of “default.”

Rudderham thinks we should. For her it is galling that MANS feels it doesn’t need to keep its registration active, given that between 2014 and 2018, the government has given the association more than $200,000.

MANS has also had extensive access to young minds in provincial schools where it spreads its pro-industry message with its  “Mining Rocks Video Contest” that offers $8,000 in prizes.

Both Liberal and PC MLAs have worked with MANS to hand out prizes for this contest in schools around the province. As I wrote here, in April 2018, Liberal MLA and Minister of Business Geoff MacLellan, helped distribute MANS prizes in a Glace Bay school. PC MLA from Cumberland North, Elizabeth Smith-McCrossin has also found time to present MANS cheques for winners of the contest, as has Mark Furey, Lunenburg West Liberal MLA and Nova Scotia’s justice minister. 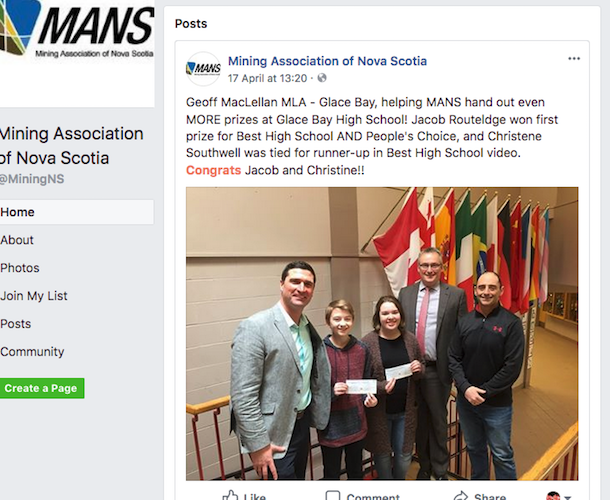 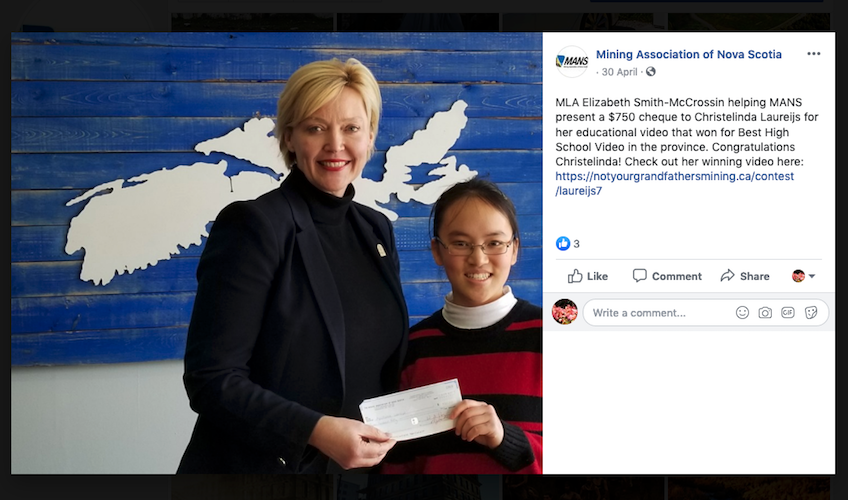 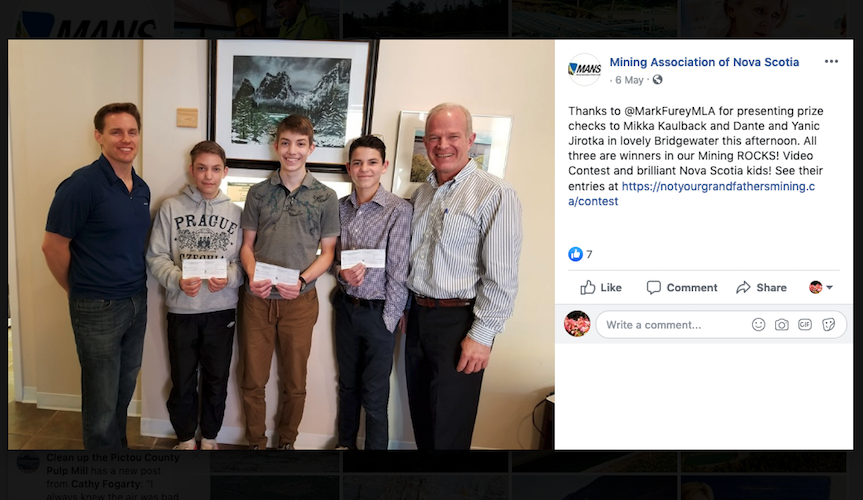 According to Department of Energy and Mines spokesperson Gary Andrea, this year MANS applied for and received $52,000 from the Mineral Resources Development Fund to organize the “Gold Show,” which it describes as a “private event ” for “industry and government representatives,” to be held on October 17th and 18th at the Alt Hotel, on the grounds of the Halifax Stanfield International Airport.

Responding to my emailed request for information on media access, MANS’ Sarah Kirby said, “The Nova Scotia Gold Show is a private conference and there are no media events.”

So MANS got public funding to hold a private event.

For Rudderham, it is galling that MANS has defaulted on its registration and is still operating, getting government support and politicians’ ears:

They are receiving taxpayer funding. They are indoctrinating our youth in schools. They are lobbying government on highly controversial issues like uranium exploration and taking protected wilderness areas for mining and exploration. They are presenting themselves as authorities above all others, on what’s best for Nova Scotia. Anyone who receives taxpayer funding should be required to prove they are in good standing on all fees.

In her view, if the association has no legal status, then neither do any contracts for funding from the province.

I also asked lawyer Brian Hebert of McKiggan Hebert in Halifax what he made of MANS’ defaulting on its registration. He said that failure to pay annual fees is not “fatal” to a society, but it would prevent the society from taking legal action if it needed. And:

Eventually it is at risk of being struck off by the Registrar. Normally, when doing its due diligence, government or anyone doing business with a society would satisfy itself that the Society is in good standing.

Yesterday afternoon I contacted DEM communications director Toby Koffman, asking if the department checks to see that all Nova Scotia societies or companies to which it provides government funding are legally registered.

This is his reply:

It is up to individual societies and companies to ensure their registration is in order.  We are aware that there is an issue with MANS’ registration, and the association is in the process of addressing the issue. Geoscience and mining industry associations are eligible to apply to the Mineral Resources Development Fund.  Since MANS is the mining industry’s association in Nova Scotia, it is eligible to receive funding.

Eligible for funding … maybe. But for the past six years, the government has given MANS financial support with which it could bombard both politicians and the public in Nova Scotia with its pro-mining PR, and in all that time, the “issue” with its registration was ignored. Until an investigative citizen got a journalist to start asking questions.