You are here: Home / Featured / Celebrating the inquiry: ‘This was because of the families, our determination, our drive, and the Nova Scotians, the Bluenosers’

Tuesday’s announcement that there will be a full public inquiry into April’s mass shooting had nothing to do with politicians and everything to do with the victims’ families and Nova Scotians.

That was the message Nick Beaton delivered to reporters during a celebration event in downtown Halifax on Wednesday morning.

Initially planned as a protest march from the Halifax Ferry Terminal to Province House, it shifted to a victory celebration march after the news broke late yesterday that the review was being dumped in favour of the inquiry the families had been demanding all along.

“I want to start off by saying this was not because of the government, right from Lenore Zann right to the top of Bill Blair. This was because of the families, our determination, our drive, and the Nova Scotians, the Bluenosers,” Beaton told reporters.

Beaton’s pregnant wife Kristen Beaton was killed on April 19 by the gunman the Halifax Examiner refers to as GW. Beaton said while politicians are “pretty quick to pat themselves on the back,” he wondered where they’ve been for the last three months.

He was alluding to the Nova Scotia Liberal MPs who yesterday publicly broke ranks with their government to state they were disappointed in a review and were advocating for an inquiry. This came after significant and widespread public protest and condemnation since the review was announced last Thursday.

In a Tuesday afternoon statement, Nova Scotia Justice Minister Mark Furey said the province would support a joint public inquiry if the federal government came onboard and called on the participation and testimony of key federal agencies.

By day’s end, federal Public Safety Minister Bill Blair announced there would be a public inquiry. 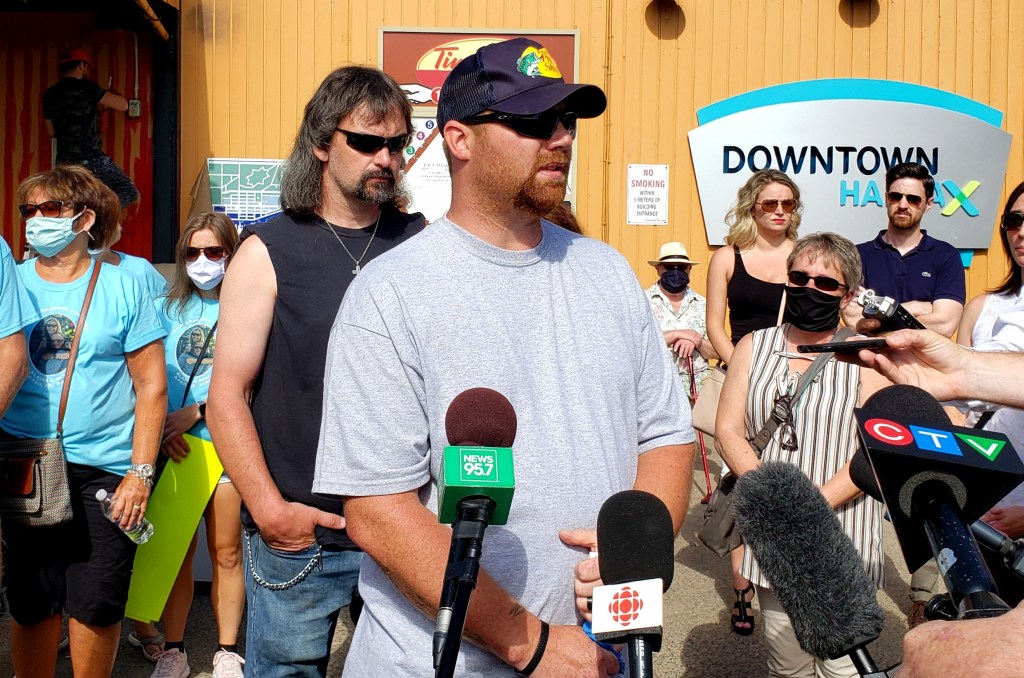 Nick Beaton speaks to reporters before the start of a victory march on Wednesday morning in Halifax. — Photo: Yvette d’Entremont

“The ones saying that they wanted it, they wanted it? They could’ve called for it, they could’ve stuck their neck out and said they wanted it, but they didn’t until … it hit the fan,” Beaton said, adding the victims’ families were grateful to Nova Scotians and Canadians who stood behind them and rallied with them as they fought for a public inquiry.

“It just proves that the little man can have a voice if you band together and stay peaceful and respectful, that you can make a change even in our government that together we can conquer,” he said.

Several families who lost loved ones during the mass shooting showed up on Wednesday morning to express their gratitude to Nova Scotians and Canadians for their support.

Dan Jenkins lost his daughter Alanna Jenkins and son-in-law Sean McLeod during the gunman’s rampage. He said learning yesterday that there would be a public inquiry was the best feeling he’s had in more than three months.

Clearly emotional, Jenkins told reporters his family was grateful for the outpouring of support from Nova Scotians who marched in protests, signed petitions and sent letters. He said he doesn’t think the reversal of course would’ve happened without the public outcry.

“It’s nice to be able to get out and thank them for a change and tell them how much we appreciate their support,” he said. 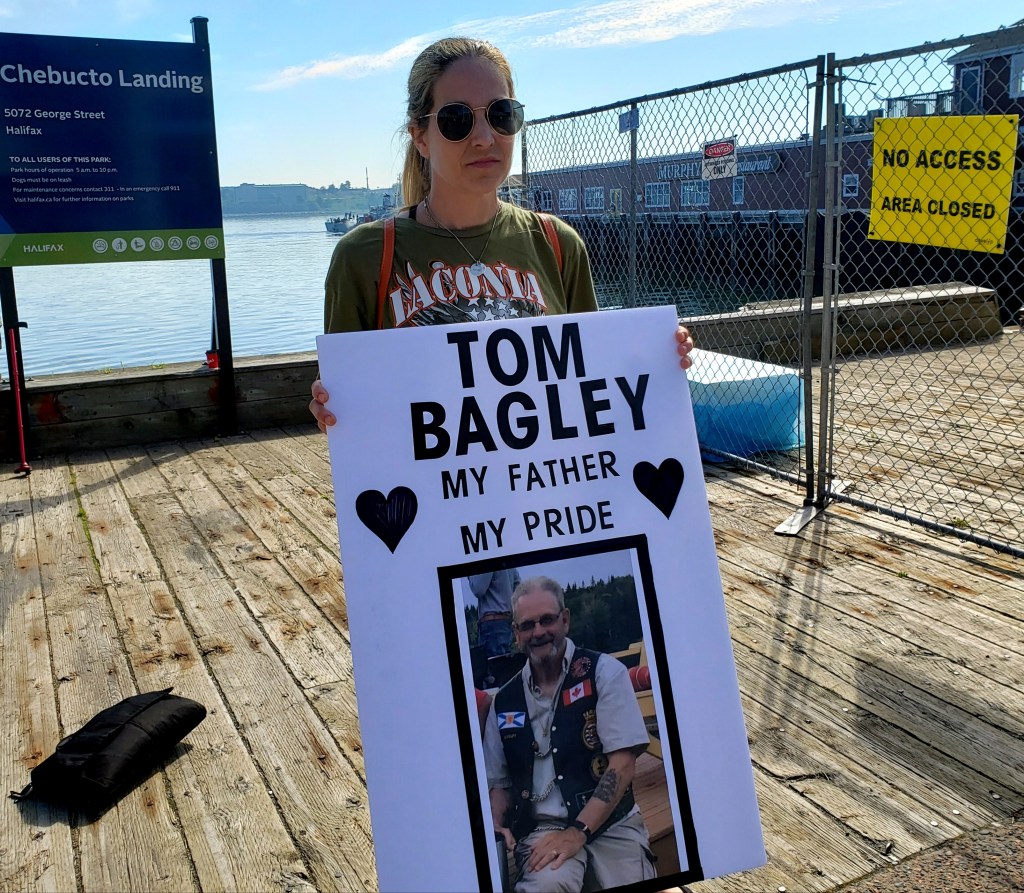 Charlene Bagley participated in Wednesday morning’s victory celebration in Halifax to express gratitude to Nova Scotians for supporting the victims’ families and their call for a public inquiry. Photo: Yvette d’Entremont

Charlene Bagley lost her father Tom Bagley during the tragedy. She showed up to celebrate the announcement that a joint inquiry will in fact be the route taken by governments. She said her primary motivation was to thank everyone in the province and across the country for their support.

In an interview, she described the last week as “a nightmare.”

“Yesterday when we heard the news, that was probably the best I have felt in the last three months. It still doesn’t change the outcome of what happened, but at least now the families hopefully can get some of the answers that they need,” Bagley said.

She described it as “not one bit of an exaggeration” to say the families have been further traumatized since last week’s announcement that the provincial and federal governments would be pursuing a joint review instead of a joint public inquiry.

“When we heard that we may not get the answers we need, it just kind of put our grief to the forefront again and it’s really hard to move on if you don’t know the whole story,” she said.

“I don’t think we would have gotten it (public inquiry) if it wasn’t for the whole province behind us … I’m hoping we’ll get the answers now, and I think it’s a long road ahead but at least we’re on the right track.” 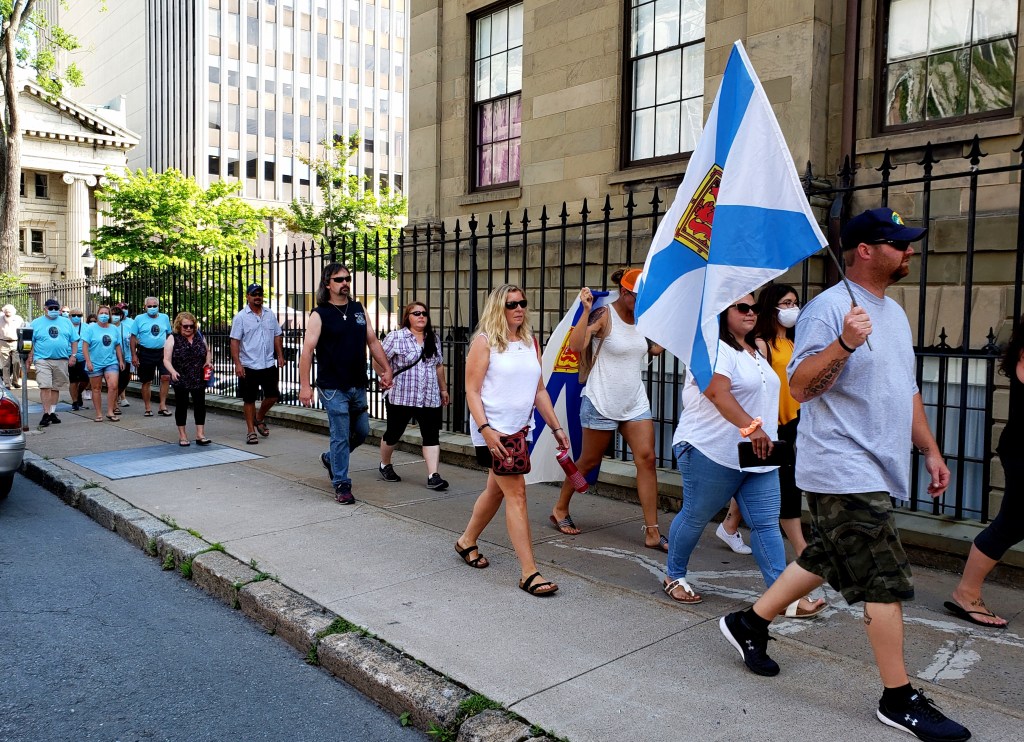 Family members of the victims’ and their supporters marched from the ferry terminal to Province House. — Photo: Yvette d’Entremont

Nova Scotia NDP leader Gary Burrill told reporters he commended the provincial government for reversing its decision, calling it the “honourable thing” to do.

“There has been a broad based public outcry of a sort that we don’t usually see,” Burrill said.

“It would have been a deep error of judgment on the government’s part to deny it, and in my judgment they have done the honourable thing to recognize the mistake that they made last week in announcing something other than a public inquiry and to rectify the mistake as they did yesterday afternoon.”

Nova Scotia PC leader Tim Houston described the journey to securing a public inquiry as “an odd route.” He told reporters the goal now should be ensuring the inquiry has the proper scope, gets the needed results, and that any recommendations that come from it are followed through. He said he was surprised that no one from the Liberal government had shown up to Wednesday morning’s event.

“They decided to pass on that opportunity and I think that’s a missed opportunity for them.”