You are here: Home / Featured / By withholding information about the spread of COVID-19, Dr. Strang is creating uncertainty, anxiety, and unfounded speculation 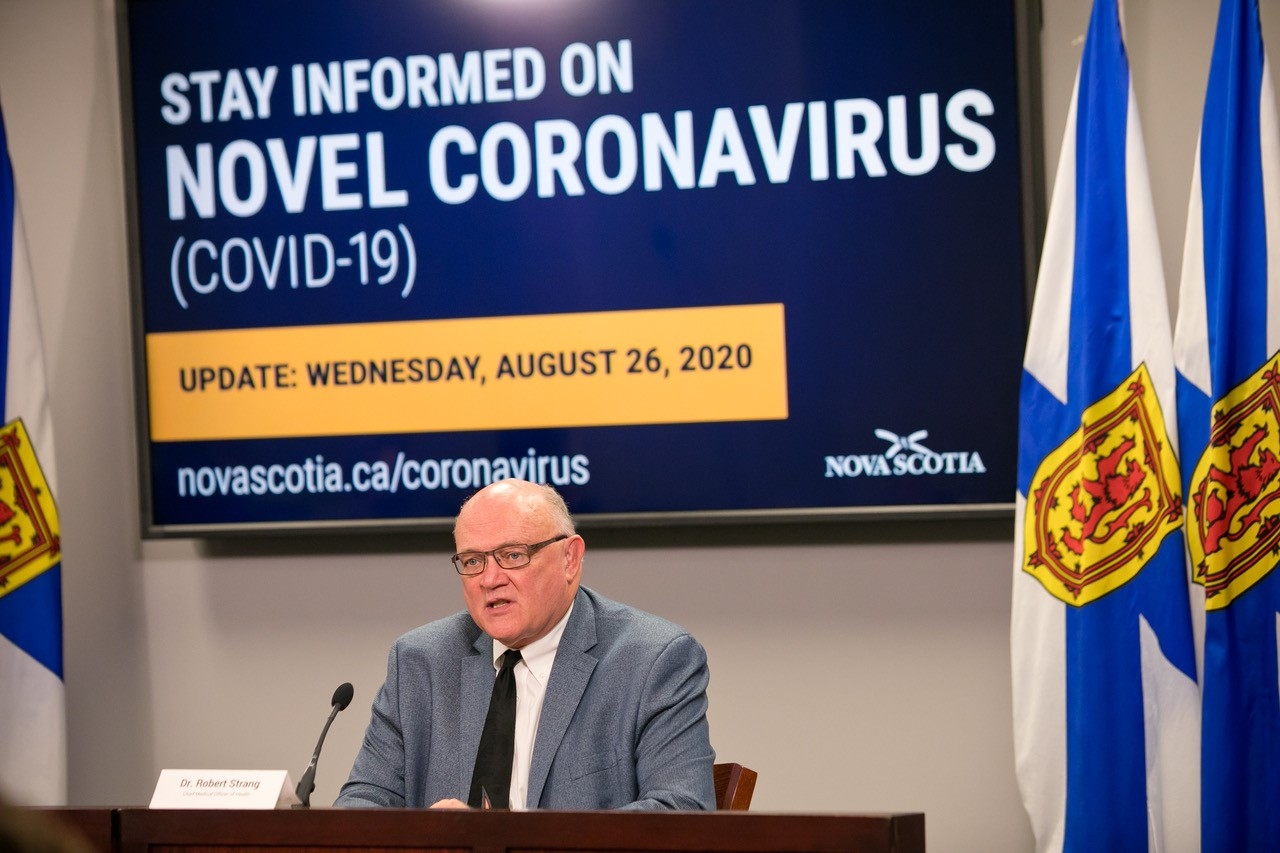 At today’s COVID-19 briefing, Dr. Robert Strang, the province’s chief medical officer of health, gave us a bit more information about what he characterized as “three small clusters” of COVID outbreaks over the past two weeks in Nova Scotia Health’s Northern Zone:

One cluster involves two foreign workers who had travelled to Nova Scotia from another country for work purposes. These individuals had been self-isolating as required, and were testing as part of their employer’s quarantine protocol. So there were no exposures to anybody in Nova Scotia from those two cases; the quarantine process worked.

Another cluster involves someone who travelled from outside the Atlantic bubble to visit family and did not self-isolate. In this situation the individual incorrectly believed that they were exempt from self-isolation, but they were not. Three other people — a close contact and two individuals who were at a restaurant at the same time as the case — have contracted COVID-19.

There were no links between any of these three clusters. And while follow-up work does continue and we’re still testing people in the incubation period of their possible exposure, other than the two cases linked to the restaurant, we have not seen any evidence of community spread.

In response to a question, Strang said that the person who failed to self-isolate works in a job category that is exempt from self-isolation, but that exemption only applies while such people are on the job, and doesn’t give them free rein to go to restaurants and the like.

The restaurant in question is Murphy’s Fish & Chips in Truro. (I reported on it last Thursday and this past Monday.)

Strang made clear that the two people who caught the disease at Murphy’s were not close contacts to the infected person who didn’t self-isolate. So how, exactly, did the two people catch the disease? Here’s my exchange with Strang:

Bousquet: Dr. Strang, can you give a bit more information about the two people who caught the disease at the restaurant? Is it that they were with the other person, sitting at the same table, was it the next table over, was it a server? People want to know what the risk factors are, so if you could give some insight into that.

Strang: Well, as I said, what I’ve disclosed is what I can disclose. They were in the restaurant at the same time as the individual, as our case. I can say we’ve also tested other people, and this is where we did a public alert saying if you were at this restaurant during this time period, you may have been exposed, come get tested. We have tested other people, all, everyone else has been negative.

Bousquet: I’m not sure what the protection of privacy is. I think… I’m hearing people out in the world — they want to know how people catch the disease. They don’t need to know the names of the people or anything like that. They just want to know, “so OK, someone caught it at a restaurant, is it because they were sitting across the table from this person, or was it someone else entirely?” Those are the different scenarios in people’s heads, and they worry about it.

Strang: So, but if I get into details around X person was working there, or they were attending with person, then people start to speculate. We’ve seen it already with COVID. People very quickly do the thinking and put things together and before we know it they’ve identified an individual. So we stick with the level of information that we give for a very valid reason, Tim. There’s a legal obligation to not disclose people’s individual health information.

For the life of me, I cannot see how saying, “the people who caught the disease at the restaurant were sitting a few tables away from the infected person” (or whatever) identifies anyone at all. What it would do, however, is inform the public about how the disease can spread.

You want speculation? Let me tell you about speculation. Over the past week, precisely because Public Health didn’t provide any details about the recent spread of COVID in the Northern Zone, I’ve been bombarded with emails, DMs, Facebook messages, etc., from people who purport to have the “real story.” I’ve been told with certainty that the disease was spread at a Sobeys warehouse, at the Michelin plant, at a wedding, at another private party (not the wedding). So far as I can determine, none of that was true. But again, it’s precisely because Public Health and Strang are withholding information that people are spreading falsehoods, rumours, and speculation. They’re filling the information vacuum.

For myself, I want to know: if I go to a restaurant, and I’m not a close contact with a positive case, how exactly would I catch the disease? Can I get it from buddy four tables over talking loud about sports? Will the server give it to me? How ’bout the toilet seat? Knowing the particulars will very much change my behaviour, and in ways that will help limit the future spread of the disease.

But this is larger than Murphy’s Fish & Chips; schools are about to reopen, and the public is anxious. Strang said today that he fully expects cases to be found in schools, and entire classrooms, and possibly entire schools, will have to self-isolate after one student or teacher tests positive. My sense is that people are guardedly in favour of opening schools, but they want to understand how the disease might travel through classrooms, what the circumstances are. With that information, they can assess whether the Back to School plan is reasonable, or not.

By withholding information that helps people understand how the disease spreads, Strang is creating uncertainty, inducing anxiety, and causing speculation.

And, he’s eroding trust in the Public Health system.

As I wrote Monday:

I totally get protection of privacy. I don’t need to know the names of people with the disease, and neither do you. But that doesn’t preclude giving “further details.” Public Health has to be more forthcoming with information so the public can understand how the disease spreads. Giving details about how and why Public Health issues (and doesn’t issue) advisories, and the underlying particulars of the spread — from travel, through community spread, etc. — informs the public. We don’t need to know the SIN and mother’s maiden name of the sick people, but it would be extremely helpful if we knew where they travelled, how the disease was transmitted, if precautions were taken or not, or if the precautions failed, and if so how so. That kind of information can be used by people to better protect themselves and other people. Instead, we’re treated like children: just do as you’re told, and stop questioning.

“[W]e also take seriously the need to inform the public when there is something they need to know in order to help contain and manage the virus,” wrote [Gary O’Toole, Nova Scotia Health senior director of Population and Public Health], exactly expressing the paternalistic attitude I’m taking umbrage with. We need information not just because we are individuals who can can help contain and manage the virus, but also because we are citizens who have the right and duty to understand public policy, and how it is applied.

O’Toole seems to take offence at the notion that people will question Public Health. That, sir, is what democracy is all about.

The Mooseheads will play before large groups of fans

Strang also announced a change in policy such that Mooseheads will now be able to play at the $48 NSF Fee Centre, before large groups of fans. That policy change was announced in a press release:

[G]overnment is working with four venues — Centre 200, Scotiabank Centre, Riverside International Speedway and Scotia Speedworld — on opportunities to host larger audiences than our current gathering limits allow. These four facilities will be able have a total audience that includes multiple groups: of 200 people for indoor events and of 250 people for outdoor events, but only if they meet strict criteria and have an approved, detailed plan. The plan must include how they intend to keep each group separate in its own ‘bubble’ at the venue.