You are here: Home / Commentary / By Any Other Name: Nova Scotia’s Department of Lands and Forestry just made “Clearcuts” disappear

Nova Scotians who signed up to receive proposed harvest plans on Crown land might have noticed some disturbing changes recently. As of a few days ago the maps no longer specify whether a proposed cut is a “clearcut” or not. The word was removed from the legend and the list of harvest prescription types. This change immediately caught the attention of Ecological Forestry of Southwest Nova, who posted this on its FB page: 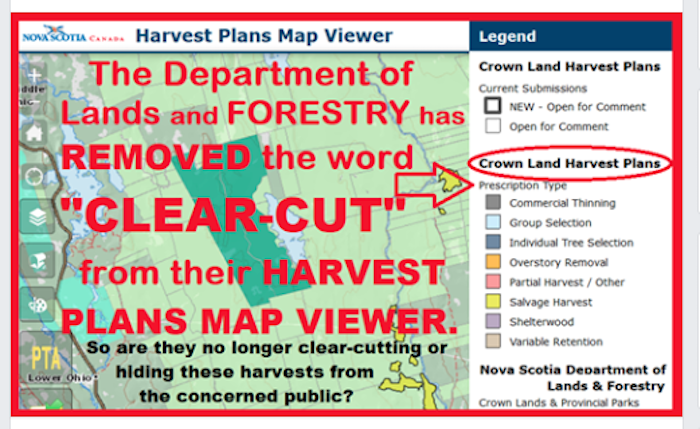 According to the Department of Lands and Forestry (DLF) media contact, Krista Higdon, the HPMV now “provides more detailed information by showing specific prescriptions rather than harvest categories” such as “clearcut” or “partial harvest.”

Higdon confirms that these changes were part of the “enhancements” to the Harvest Plan Map Viewer (HPMV) the department announced on January 31, though no mention was made at that time of removing “clearcut” from the list of prescriptions.

The announcement that was emailed to those signed up to receive the proposed harvest postings said the changes were “based on requests…from users.” The only changes mentioned in the notice involved making some cosmetic changes having to do with colour shading, increasing the comment period from 20 to 40 days, and removing from the map and legend those harvest plans that are no longer open for comment — something the department said was intended to “simplify the mapping” and “speed up the application’s response time.” Despite the reasons given, the changes also indicate a decided move away from the transparency the government promised by introducing the HPMV system in the first place.

Recall that back in the summer of 2016 when it was launched, the intention of the new system was to “improve public engagement on planned fibre harvests” on crown woodlands. Lloyd Hines, the minister of Natural Resources, extolled at the time: “Nova Scotians want and expect an open and transparent process when it comes to the management of Crown lands…This map viewer is part of our commitment to enhance public consultation, which will help to provide that transparency.”

Ray Plourde is the wilderness coordinator with the Ecology Action Centre. He says the “so-called ‘enhancements’ to the HPMV appear designed to provide the public with less information, not more.” The use of the term “clearcut” — plain language that everyone can understand — is being replaced by “industry techno-jargon,” says Plourde, “designed to confuse the public and obfuscate the reality of widespread clearcutting. Just change the words and poof — the problem is gone. Except it isn’t.  It’s just more difficult to follow now. It’s a terribly cynical move.”

Removing from the map those cuts that are no longer open for comment is also a step in the wrong direction. It means it’s no longer possible to see “the cumulative amount of harvesting taking place over time,” says Plourde. The department “could have easily made this a separate layer that users could simply click on or off but it would seem they don’t want the public to see this.”

To illustrate why this change is a blow to transparency, let’s take the proposed harvest of Hardwood Hill in Premier Stephen McNeil’s riding in Annapolis County as a case in point.

The proposed harvest of 20 hectares of Hardwood Hill was posted on the HPMV in the fall of 2018 but no one in the community was aware of it until after the comment period had passed. Once the plan was discovered, however, a spontaneous outpouring of community concern resulted in the harvest being withdrawn. Here’s the thing: At that time, the proposed harvest was still visible even though the comment period had ended. With these new “enhancements” this would no longer be the case.

Having observed firsthand the flurry of discussion on social media in the last few months in response to proposed clearcuts posted on the HPMV, it’s fair to say that the system had become very successful at engaging and informing the public. But maybe too successful, from the department’s point of view.

The recent changes to the HPMV — particularly removing the term “clearcut” and removing harvests that are no longer open for comment — do nothing to enhance the need for more transparency, an objective raised numerous times by various authoritative sources over the years.

Most recently, it was William Lahey, in his 2018 independent review of forest practices, who not only reiterated the importance of transparency, but also pointed to the importance of making “comprehensive” information regarding the state of the forests, including its ecological condition, public.

Lahey also recommended the “tracking and reporting of the state of the forest,” which hasn’t been done in any comprehensive way since the late 1990s.

The most recent data from the National Forestry Database (NFD) shows that clearcutting is still the predominant method of cutting in Nova Scotia, though there was a very slight improvement over the previous year. In 2016, 80 per cent of the crown forests harvested were clearcut. When we include private land, the figure increases to 86 per cent. The data also show that cutting on crown land continues to increase — between 2014 and 2016 it increased by 24 per cent and in 2016, more crown land was cut than in any other year since 1990.

But despite these official numbers, the department contends that only 65 per cent of harvesting on crown land is clearcutting. As I’ve already reported here, part of the reason for the difference between what the provincial government says and what the NFD says is that unlike the NFD, the provincial government does not consider “shelterwood” harvesting a form of clearcutting, even though it is a form of even-aged management, and therefore should be classified as such.

The idea behind shelterwood harvesting is to leave some of the established trees to allow for new seedlings to grow in their shade or to remove all the mature trees leaving behind some of the young seedlings. Either way, eventually the mature forest is removed to make way for an even-aged forest.

By removing this type of even-aged management from the umbrella term “clearcut,” the government is just playing with semantics. But it isn’t the only thing the department has done to make its track record on crown land appear better. As public pressure around clearcutting has intensified over the last several years, the department also responded by re-defining the word.

As I reported here and here, in 2012 Darrell Dexter’s government promised to reduce clearcutting by 50 per cent — a move that received all-party support as well as overwhelming endorsement from the public, sentiments that were not shared by the forest industry that relied on the economics of clearcutting to make their business cases viable.

So instead of actually reducing the frequency of the harvest practice, the department realized that it was also possible to bring those numbers down by changing how a clearcut is defined. The Canadian Council of Forest Ministers already had a perfectly good definition of clearcuts in the Canadian context: “a silvicultural system in which most merchantable trees in a stand are harvested simultaneously where often some mature trees are retained to act as a seed source.” At the time, in an email exchange with media advisor Bruce Nunn, I was told that prior to 2012 there was “no formal definition” for a clearcut in Nova Scotia and that “given the objective to track harvest activities, a definition to quantify clearcuts was required.”

So, the new definition of clearcutting became, “forest harvest where less than 60 per cent of the area is sufficiently occupied with trees taller than 1.3 meters.” At the time, forester and lawyer Jamie Simpson was quoted saying that in practical terms, this new definition meant that “half of all cutting can leave a moonscape; the other half can leave a scattering of low-quality trees, none necessarily higher than four feet.” The new definition of clearcutting along with pictures of what did and did not qualify as a clearcut were posted on the department’s Web site.

But while the new definition for clearcutting might have been effective at bringing the numbers down, it didn’t change the reality on the ground or how the public felt about the practice and the devastation left in its wake. This problem would require something even more underhanded. The term itself would have to disappear altogether.

In fact, it appears that well before the term was removed from the HPMV, it was already being replaced in the department’s official documents.

For one, the term is hardly mentioned in the department’s  Forest Management Guide, which Krista Higdon says is in the process of being revised “in response to Lahey’s recommendations,” to  “include all the harvest prescriptions that are in use.” 1

Then there is the 6-page document called the “Interim Retention Guide,” which also aims to address Lahey’s recommendations to increase retention (the number of trees left standing) in situations “where clearcuts are prescribed.” In the interim guide it appears that “clearcuts” are now being called “overstory removals” and “seed tree” harvests. These are likely the categories under which clearcuts will now appear in the HPMV.

What the department calls transparent is about as diaphanous as a rubber tire.

Linda Pannozzo is an award-winning freelance journalist and author of two books: The Devil and the Deep Blue Sea (2013) and About Canada: The Environment (2016).