You are here: Home / Environment / Boat Harbour cleanup to be subjected to environmental review 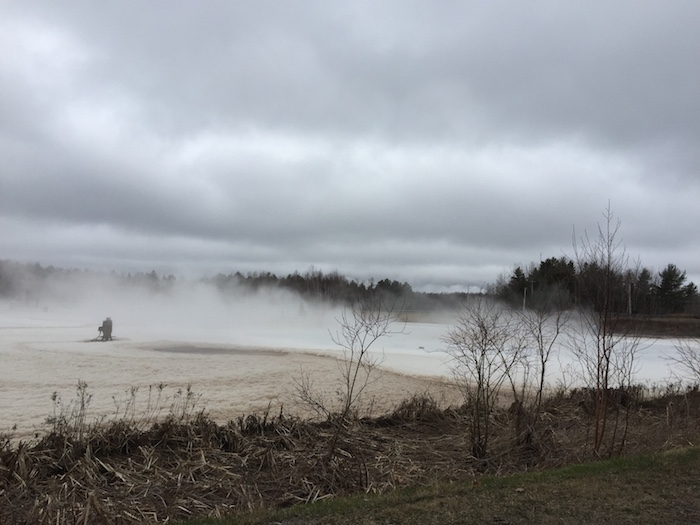 Boat Harbour has been used as an industrial waste lagoon for the Abercrombie pulp mill (now Northern Pulp) near Pictou for 50 years. Photo courtesy Dave Gunning.

The Canadian Environmental Assessment Agency announced yesterday it was launching an environmental assessment of the proposed cleanup of the Boat Harbour lagoons where tens of million of litres of daily effluent from the kraft pulp mill at Abercrombie Point have been stored, aerated, and released into the Northumberland Strait for 50 years. Tonnes of watery sediment contain contaminants such as copper, lead, zinc and mercury that exceed federal marine guidelines.

The province, through the newly created Nova Scotia Lands Department and its hired consulting firm GHB, had submitted a proposal to dredge, clean up, and remediate the toxic waste site which sits next door to the Pictou Landing First Nation. An earlier estimate (soon due for an update) pegged the cost of the massive cleanup at $217 million, for which taxpayers will be on the hook thanks to short-sighted, long-term agreements signed by previous governments with various owners of the mill.

This federal environmental assessment is not the one sought by the Friends of Northumberland Strait, a group opposed to Northern Pulp’s proposed replacement for Boat Harbour primarily because the facility would pipe hot treated effluent out into Caribou Harbour where lobster and herring larvae congregate. The environmentalists asked Ottawa to consider doing an environmental assessment on the new facility because of what it described as “a conflict-of-interest” on the part of the province. The government stands to lose big money if it rejects the mill’s pitch to build a new effluent treatment plant.

Without a new anti-pollution system in place, current provincial legislation requires that Boat Harbour and the mill would have to close by January 2020, less than a year away. Under an existing 25-year lease extension agreement* signed by the John Hamm government, the province could have to pay Northern Pulp for lost profits for the next 10 years. (Northern Pulp Nova Scotia made former Premier John Hamm the chair of its board of directors some years ago.) The interpretation of that agreement is likely to the subject of a court battle.

The federal government is leaving that decision — Yes or No to a new wastewater treatment facility to replace Boat Harbour — strictly to the Nova Scotia Department of Environment. Last month Environment Minister Margaret Miller told the company it would need to do a lot more work to nail down the potential impacts of the pipeline on  the lucrative fish stocks as well as the Town of Pictou’s water supply. The department is also requiring Northern Pulp to cough up a list naming the contaminants and their concentrations in the effluent going into the Strait.

Although its been over four years since the Act to close Boat Harbour was passed, Northern Pulp has asked the McNeil government for an extension to the 2020 deadline. It has more studies to do over the next year if it hopes to get the required approval from the Department of Environment. Meanwhile, the Boat Harbour cleanup — or remediation project — can’t get going until either a new treatment facility is operating or the mill closes down.

The federal environmental assessment of that plan — which includes looking at components such as the wetlands, dredging the ponds, disposal of the metals, and the decommissioning of the existing pipeline and outbuildings — will be in addition to a Class 2  Environmental Assessment already promised by the provincial Department of Environment. A Class 2 process takes a minimum of 265 days and involves appointing a panel and public hearings. It’s the same process the Friends of Northumberland Strait had urged the Province to choose when evaluating Northern Pulp’s plan to build a new effluent treatment plant and keep the pulp mill open.

You can read the draft guidelines of the federal EA for the Boat Harbour Remediation Project here.

Below is the address for citizens who might want to add their two cents worth, in English or French, as long as the message gets filed by May 10, 2019..

* as originally published, this article mistakenly characterized the lease extension agreement as a lease indemnity agreement.