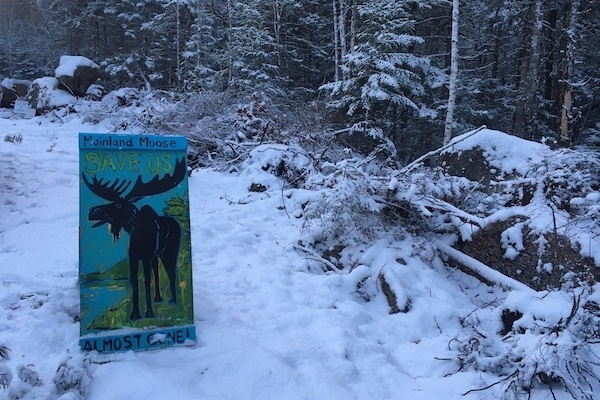 Sign at the blockade site in Digby County. Photo contributed

Monday, Eleanor Wynn and three other members of Extinction Rebellion went to the Department of Lands and Forestry office in Halifax — wearing masks and diligently observing COVID-19 protocol on spacing — hoping to get the attention of Derek Mombourquette, who took over as Minister of Lands and Forestry following the resignation of Iain Rankin, who is gunning to be leader of the NS Liberal Party and thus premier of Nova Scotia when Stephen McNeil steps down in February 2021. 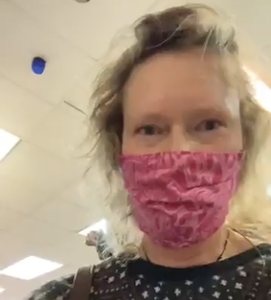 Wynn tells me their aim was to stay at the Department of Lands and Forestry (DLF) office until Mombourquette, who is also Minister of Energy and Mines, agreed to respond to a letter sent to him on November 11 by Nina Newington, who was asking for a meeting about clearcutting that his department has approved on Crown land in the New France area of Digby County. 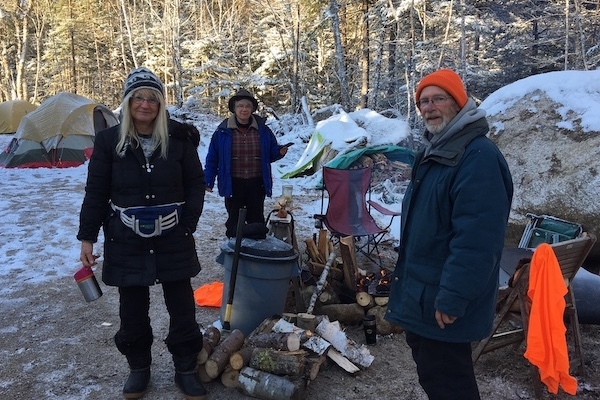 Newington is a spokesperson for a group of citizens who, since October 21, have been camped out and blocking access for logging equipment into proposed cut areas on Crown land in the area — known to be important habitat for the endangered mainland moose — near Rocky Point Lake. 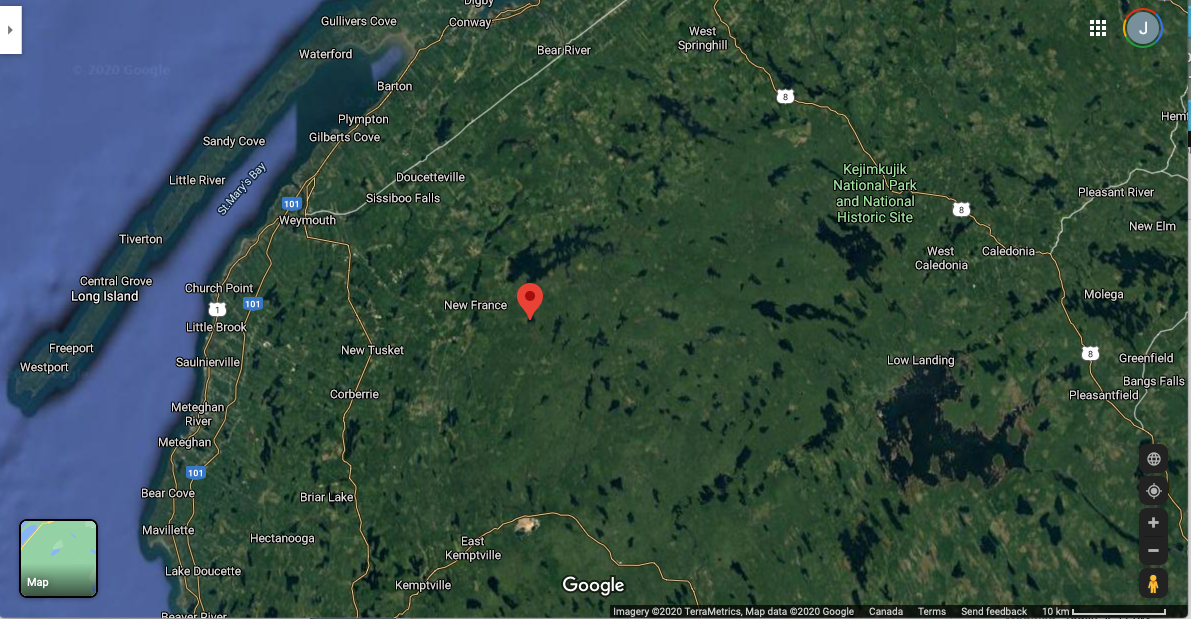 In her letter, Newington wrote that the citizens concerned about the proposed cuts were asking for “an immediate halt to all logging activities on the Crown lands to the south of us, between the Silver River Wilderness Area and the Tobeatic Wilderness Area,” an area that had “already been subjected to extensive cutting, including a 720 acre (290 Ha) clearcut.” 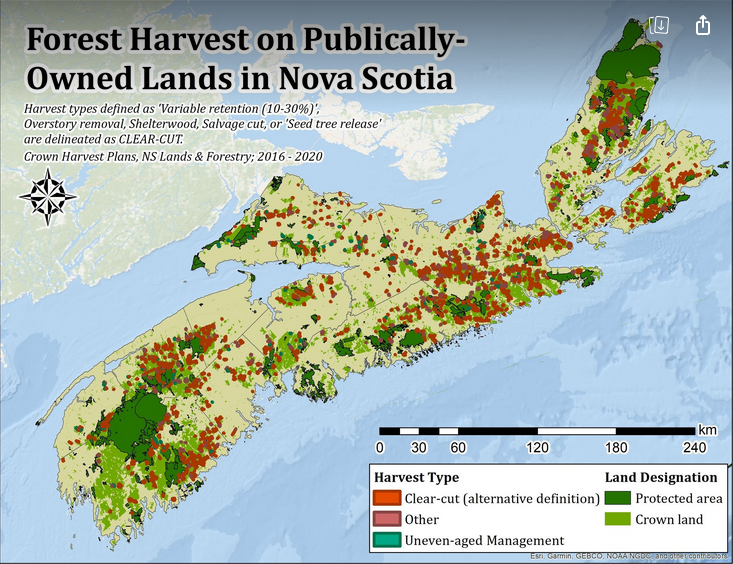 The suspension of logging approvals, Newington said, “should be accompanied by an independent review by biologists to establish best management practices for the area with the primary goal of protecting mainland moose and establishing the core habitat necessary for their recovery.”

Newington also asked Mombourquette to meet “as soon as possible” — either in person or by video conference — with her and two other people knowledgeable about mainland moose and the impacts of forestry.

Newington has had no reply.

Frustrated by the silence, Wynn and the other members of Extinction Rebellion decided to hand-deliver copies of Newington’s letter to the DLF office.

Wynn was seated on the floor, causing no disturbance, just hoping that their presence would inspire the minister — or someone from the department — to respond to their concerns about unsustainable forestry practices, clearcutting and failure to protect species at risk, and call Nina Newington to set up a meeting.

Instead of agreeing to meet or speak with the protestors, someone in the department called the police. Wynn was arrested, handcuffed, dragged from the building and taken to the police station, where she was charged with not leaving premises when she was told to.

Nina Newington told me yesterday that they have now set up a second blockade, and that in total there are 11 people — some from Extinction Rebellion and others from different groups — camping out at the two sites to try to block access to logging equipment, and that ages range from 25 to 76 years.

Newington says more are expected, and they don’t intend to leave until there is an injunction forcing them to do so, or until the Department of Lands and Forestry puts a moratorium on cutting in the area. 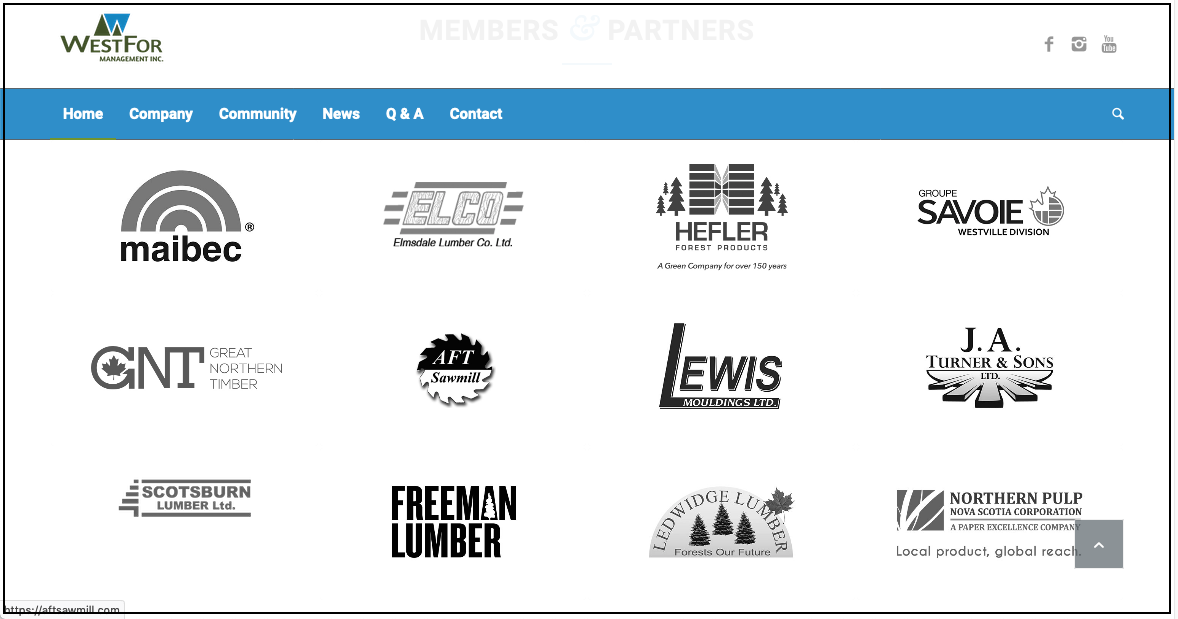 On Sunday night, the owner of the company doing the logging arrived with two RCMP officers in tow, she says. He told the protestors that loggers would be arriving at 5 the next morning.

According to Newington, the protestors advised him to call Westfor, a consortium of 12 mills and private companies — including  Northern Pulp — that she says is managing the Crown land harvests in the area. She says the RCMP assured them that the loggers would not be back at 5am.

Newington says the loggers told those at the blockade to move their “fucking vehicle” that was parked across the road, or else they would move it for them. When the protestors refused, the loggers drove their pick-up trucks around the blockade.

Nature Nova Scotia has joined the campaign to prevent the cutting, and has started a petition demanding that:

… the Department of Lands and Forestry uphold the Endangered Species Act and immediately halt all harvest activities that result in heavy removals (e.g. clearcuts and even-aged harvests) on crown lands between Fourth Lake and the Napier River, where the presence of the Endangered Mainland Moose was recently confirmed by several biologists and naturalists.

Wynn tells me there is no sign that anyone in DLF is listening to the hundreds of concerned citizens who have signed the petition, written letters, made phone calls, or to those who have been camped out to protect moose habitat in Digby County for more than a month.

But it’s not just citizens concerned that the Department of Lands and Forestry ignores.

DLF is also not very good at answering journalists’ questions, at least not if my most recent attempt to get answers is any indication.

In October, I read in a report submitted to the Supreme Court of British Columbia by the court monitor about Northern Pulp in its creditor protection case, that even though the pulp mill itself was in hibernation, Northern Pulp companies continued “woodland operations” in the province and continue to get government funds for them. As I wrote for the Examiner on November 6:

According to the monitor, when those operations involve woodland roads on Crown land, the province can reimburse Northern Pulp for work on the roads. In addition, “the Province provides a rebate to Northern Pulp for spending on silviculture activities.”

Forestry Operations are profitable and provide a source of net positive cash flow to the Petitioners. Furthermore, it is the Petitioners’ view that the woodland operations must be maintained throughout the CCAA administration to ensure critical industry relationships are sustained and remain accessible when the Mill reopens. The woodland operations continue to support the forestry community including local sawmills and other sector participants who are critical to the long-term viability of the Mill and the Petitioners restart plans.

The Examiner has contacted Nova Scotia Lands and Forestry with several questions about Northern Pulp’s woodland operations and annual allocation on Crown land, stumpage rates it pays for harvesting on public land, as well as the amounts of the rebates for silviculture and woodland road work. As of publication, answers have not been received.

Even after that article was published on November 6, I never did get answers.

My first email to Lands and Forestry was sent on October 26, when I wrote this:

In 2013, then-DNR Deputy Minister, Duff Montgomerie, wrote to Northern Pulp’s Pedro Chang and offered the company an additional 125,000 tonnes of fibre from Crown land (including on the recently lands purchased from Resolute), bringing its total allocation to 225,000 tonnes per year.

1. Does that agreement still hold? If not, what has changed (the annual amount of fibre allocated from Crown land, etc)?

2. If it does still hold, is Northern Pulp exercising its right to harvest on Crown land, and if so, how much fibre this year? From which Crown lands?

3. If it is still harvesting, what justification is there for that when the pulp mill is not operating?

4. When the mill opened back in the 1960s, the Scott Maritimes Act allocated it 230,000 acres of Crown land in Halifax County … does that agreement still stand? If not, when did it expire? If so, is harvesting still going on?

5. What is the stumpage paid in 2020 for harvesting on Crown land?

Within hours, I received a reply from DLF spokesperson Deborah Bayer, saying, “Thank you for your media inquiry.  We will get back to you shortly.”

I replied immediately, thanking her for her response.

As I was finalizing my article for the Examiner, on November 4, I wrote back to Bayer asking when I could expect to receive answers to my questions sent on October 26, and to save her the time of searching for them in the email thread, I attached the same questions again.

I’m still waiting. As are the citizens concerned about the imminent clearcutting of forest that provides habitat for moose, among all the other ecological services that forests provide.

Perhaps what DLF really stands for is Department of Lips-sealed and Forest-clearing.