You are here: Home / Environment / Biomass, Freedom of Information, and the Silence of the DNR Company Men

In December 2016, Nova Scotia Environment (NSE) granted approval to Bear Paw Pipeline Corp., a subsidiary of Liquefied Natural Gas Ltd. (LNG), to build a $200 million pipeline from Bear Head LNG in Goldboro to the future location of the $4 billion LNG export terminal at Point Tupper on the Strait of Canso. According to documents filed with the Utility and Review Board, the project is expected to cover approximately 1,087 hectares of land, of which approximately 50 per cent is Provincial crown land — some of it identified as protected areas or proposed protected areas. All in all, the pipeline corridor will be roughly 62 kilometres long and construction is set to begin in 2018. 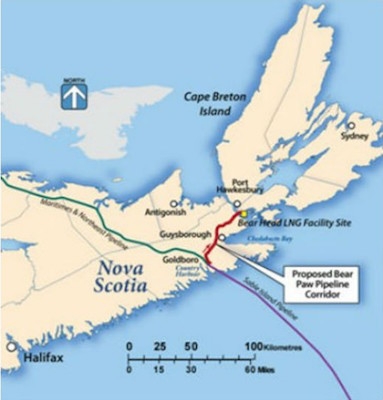 In order for Bear Paw Pipeline to get approval from the Nova Scotia Department of Environment (which it got in December 2016), an Environmental Assessment was required. Bear Paw contracted Stantec Consulting Ltd. to do the job. Page 147 of Part 2 of Stantec’s EA reads:

The reference cited (NSDNR 2015a) is none other than the GIS forest inventory data, specifically age class data based on satellite and aerial photography — the same data this reporter has been trying to obtain from the DNR since March 2016 in order to update historical trend lines dating back to the 1950s showing the provinces forests are getting significantly younger. 2

Around the same time Bear Paw was filing its EA with the province — an EA that cited these very same data — the DNR was sending me on a wild-goose chase for it, first telling me it was in a Data Sharing Agreement (it wasn’t) and then telling me (twice) it was in the Open Data Portal (it wasn’t there either).

Less than a month ago, I reported in Part 4 of this series that after an eight-month review, the Office of the Information and Privacy Commissioner (OIPC) for Nova Scotia had closed my file regarding my request for the age class data from the DNR. After digesting the DNR shenanigans, OIPC Intake Officer Mary Kennedy concluded that the “information does not exist” and that while age class data may have been used in the past, that was no longer the case. “Age class is not an attribute of the inventory files” and “records of age class do not exist as DNR does not use age class to define forests.” In her final letter Kennedy continued: “The only recourse to address this issue would be to recommend to the public body [the DNR] that it be clearer when responding to applicants about whether or not a requested record actually exists, which recommendation I have already made to DNR.”

But the EA for Bear Paw Pipeline shows the data do exist. The question is, how and why did they get it when the public doesn’t have access to it?

Sara Wallace is a senior associate with Stantec and a project manager who worked on the Bear Paw EA. When I asked her about how Stantec was able to get the GIS-derived age class data for the EA, she said “it was not a big secret,” but that I should contact the client — Bear Paw Pipeline — to find out details.

But contacting the “client” wasn’t as easy as it sounds. A Google search pointed me to an office on Upper Water Street in Halifax, but no name, number, or email was provided. Bear Paw’s US headquarters in Houston, Texas lists Darshi Jain as the project director — he is also who the Nova Scotia Minister of the Environment, Margaret Miller, addressed her December approval of the pipeline to — but according to the company’s receptionist in Houston, Jain is no longer with the company. She said one of the company’s reps in Canada might be able to help. One of them is Ghislain Pitre, manager of Bear Paw Pipeline and Bear Head LNG.

I spoke to Pitre on the phone and he confirmed that the DNR did provide the company with the data, but he wasn’t able to comment on how they got it or in what form they got it. Pitre says that because of a confidentiality agreement with the province, the only data he’s allowed to comment on is what the company collected itself in the field.

In a follow-up email, Stantec’s Sara Wallace said that since the data is “client-owned” she couldn’t comment either, but she suggested I speak to the DNR directly, “since it was NSDNR that provided that information.”

I asked the DNR how a pipeline company is able to access information that the public isn’t. Department spokesperson Bruce Nunn responded by email, saying that in 2015, DNR did provide Stantec with age class information “for a small portion of the province” through a data sharing agreement. “Upon review, this attribute should not have been provided because the DNR no longer provides GIS derived age class. This is an isolated instance and has not been repeated.” 3

So the data does exist and it was provided to a pipeline company in the Minister’s riding.

Clearly we are light years away from the “culture of transparency” the department purports to foster.

Editors note: This is part 5 of Linda Pannozzo’s “Biomass, Freedom of Information, and the Silence of the DNR Company Men” series. See also Parts 1, 2, 3, and 4.