You are here: Home / Environment / Biomass, Freedom of Information, and the DNR Company Men, Part 2: An Open Letter to the FOIPOP Review Officer 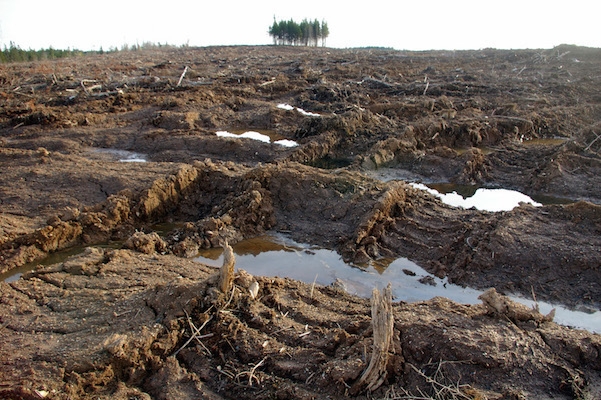 Editor’s note: In March, the Halifax Examiner published Linda Pannozzo’s investigation into biomass harvesting, “Feeding the Fire.” Pannozzo followed that up in April with “Biomass, Freedom of Information, and the Silence of the DNR Company Men,” which looked at how information is controlled and managed in the Department of Natural Resources, and how her investigation was purposefully frustrated by public officials. This is a follow-up to those articles.

Today’s the day — 60 days since I received the reply to my FOIPOP request and the last day that I’m able to request a review. I hope this letter provides the background, context and details of my dissatisfaction with the results of my initial request.

I have been told that when it comes to access to information in Canada — particularly that which relates to the open and accountable management of natural resources — we are not much better off than countries like Russia and Nigeria. I know that’s hard to believe. Canada? No way.

Before I get into the details of my own request for your review I want to point out that your own office’s Annual Report for 2014-2015 found that the current state of access in this province is less than stellar:  “Access request processing times are increasing, the proportion of information fully disclosed is decreasing and there was a dramatic increase in fees charged in 2012.” You and I both know that access is important because it helps ensure an open and accountable government. Which brings me to my second point. A country’s natural resources — things like oil, gas, fish, minerals, forests — belong to the citizens of that country. A raft of evidence worldwide shows that when these kinds of natural assets are not managed in the public interest there is corruption and conflict.

Now back to the matter at hand. In 2001 and again in 2009 I co-authored reports for GPI Atlantic, an organization that had been tracking indicators of forest ecosystem health in part using Geographic Information System (GIS) inventory data that had been collected by the Department of Natural Resources since 1958. I had no issue accessing this public information: Some of the historical data were in the form of hard copy reports that we accessed and photocopied from the DNR library, some of the more recent data were in electronic form on the DNR Web site, and some of it (unpublished at the time) was provided to me by Ken Snow, then manager of forest inventory.

Not a pretty picture but a real one nevertheless. It seems that young, degraded forests are still profitable, particularly for shitty companies looking for fast, renewable fibre, not maintaining healthy forests. Please excuse the strong language, but I think you’d agree it’s appropriate given what’s being allowed to happen in the province in the name of profit.

Here is where you folks come in. I wanted to know what happened in the last decade or so — since 2003 — in terms of age class and species composition for the province and regions, and as a journalist I approached Bruce Nunn, the media contact at the DNR and requested the data and after about a month I came up empty-handed. So I filed a FOIPOP request for GIS and PSP data.

Oh, sorry. I need to backtrack a bit here. Let me explain what PSP data are, why I requested them, and why I don’t really believe them.

PSP means “permanent sample plot” and in addition to the GIS forest inventory, the DNR also maintains more than 3,000 Permanent Sample Plots (PSP) randomly placed across the province. This system, in place since l965, was according to the DNR “designed to track volume growth and mortality of the natural forest,” but in l994-l998 it, for the first time, used the PSP Plots for a forest inventory. Prior to that, the only publicly available PSP data measured periodic annual increments. The problem with PSP data is it’s unclear whether they are in fact representative of anything. Please bear with me. I think a background on all of this is necessary for you to understand why I’m asking for a review.

It is my understanding that in order to extrapolate the measurements on these plots to the province as a whole, it must assumed that the plots are treated in exactly the same manner as the surrounding lands and not given preferential treatment. In other words, if the land is clearcut around a PSP plot, then the PSP plot is to be clearcut too. I have often wondered if there has ever been a field study/ audit (independent or internal) conducted on the plots to show or verify that they are in fact representative of NS as a whole. As far as I know, prior to 2008 no such field study has been done. About a week ago I sent this question to Bruce Nunn and am still waiting to hear back.

The thing is, PSP data typically show higher volumes and proportions of old trees and when you compare the PSP data with GIS forest inventory data, the PSP numbers are consistently a lot higher. That makes sense if they’re given preferential treatment. I’ve heard from one source that industry contractors are being instructed to treat PSP plots differently than the surrounding lands. If this isn’t the case then the DNR should have the audits to prove otherwise.

So this brings me back to the results of my initial FOIPOP request. The reply from Frank Dunn, the Deputy Minister of DNR, was dated April 4, 2016. It stated that I had 60 days to ask for a review, so that’s why I’m writing today. In that letter Dunn wrote:

The letter went on to say that I needed to contact Jonathan Kierstead, Director of Forestry Division (formerly with Resolute Forest Products) and Chris Bailey, the Forest Inventory Manager. The interesting thing about the subsection Dunn points to is that according to the Act it pertains to “material that is a matter of public record.” My question to you, Ms. Tully, is if the material is in the public record then why do I have to request them — why can’t I just access them on the DNR website? And, if they are already part of the public record then why is my access to them being restricted through a data sharing agreement?

The second problem is that the DNR sent me a “sample” agreement [read the sample agreement here] and I have two really big issues with it. First, there’s no mention of the GIS data, which is what I’ve been asking for all along, and b) it prohibits me from sharing or making these data public. I didn’t realize I needed to state the obvious, so I will: The only reason I’m subjecting myself to this extremely long and drawn out form of torture is because I want to make the information public. But here’s the thing: the data they’re going to send me is raw, which means it’s basically indecipherable to someone like me. I will need help from an expert in data analysis with experience in programs like geodatabase (.gdb) and a comma-delimited format (.csv). Honestly, just the thought of having my computer clogged with reams of these files is enough to make me feel nauseous. But according to Kierstead, getting help understanding the data is also restricted:

Forestry Division will issue you a data use license agreement that stipulates you cannot share the data you receive through the agreement with the public or another party.  Any analysis results or summaries you produce may be shared or published.  The purpose of the data share agreement is to limit liability, guarantee ownership of distributed data is retained by DNR, and ensure sensitive information is respected…Any other user who would be privy to the data would need to sign off on a data use license agreement as well.

So nearly two months since my FOIPOP request I don’t feel like I’ve gotten any further in finding anything out about the state of our forests. I’m hoping you can help.