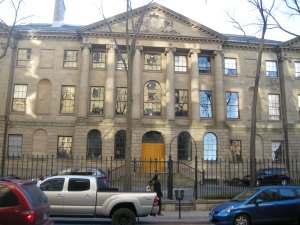 On April 22, the Liberal government tabled an Act that student and faculty groups say will curb the rights of unionized faculty and staff while failing to address the core issues with financial mismanagement at universities.

The legislation – which the government has trumpeted as the first of its kind in Canada – will require consistent financial reporting from all provincial universities, and will allow university administrators to initiate a ‘revitalization planning process’ in the event of an actual or anticipated deficit. During this process, the rights of unionized faculty and staff to file grievances or go on strike over changes would be suspended.

Provincial funding would then be contingent on the university complying with the conditions of that revitalization plan.

NSGEU President Joan Jessome says that she doesn’t object to the government trying to hold universities to account for their use of public funds; the issue is using the same piece of legislation to come after the constitutionally protected rights of workers.

“Same as they did with Bill 1…They’re using the law to take away rights of workers to bargain collectively, to go out on strike if necessary, and to grieve their employer if they believe the process is at fault.”

This could mean, for example, that in the event of a merger between universities, both institutions could trigger a revitalization period and any labour action, conciliation or grievance processes would stop.

The legislation also contains an article that would allow individuals and organizations attempting any of these kinds of actions to be fined.

This kind of clause is not uncommon in legislation that takes away workers’ rights, says Jessome; because workers will fight these kinds of moves, legislators impose financial penalties to give the law some teeth.

What’s more unusual, she says, is that there’s no clear articulation in the Act of when and for how long the revitalization period would apply.

Under the guise of accountability, the Act gives the government power to arbitrarily undermine collective agreements.

“They took a bill to tell the universities ‘we’re going to manage you if you can’t manage yourselves’, and they’ve used that to take away workers’ rights.”

In theory, increasing accountability is a measure with which few student or faculty groups find fault.

There needs to be better accountability to prevent university administrators from taking actions such as diverting funds from operating budgets to capital projects while the core mandate of the university suffers, says Catrina Brown, President of the Dalhousie Faculty Association.

But the Act proposes a level of government control over universities that violates institutional autonomy and academic freedom, she says, and no professor, department or university could hope to benefit from it.

The Act states that any revitalization plan must include “goals and objectives for contributing to social and economic development and growth in the Province,” including the commercialization of research, the creation of a “skilled, entrepreneurial and innovative workforce” and improving the relevance of courses and programs to society and the economy.

The Act would require university decisions to align more closely with the government’s social and economic priorities.

Universities would also need to develop a plan for “excellent collaboration between the university and industry.”

Brown says the corporatization of universities and commercialization of research is nothing new, but that it’s particularly frightening to see it stated so explicitly.

It has serious implications for academic freedom and the control academics can exercise over their work, whether that’s protection of intellectual property or the rights of researchers to publish findings that go against the interests corporate donors.

Academic freedom, of course, isn’t a legal right; it’s guaranteed by collective agreements – another way in which the Act could undermine professors’ ability to say, teach and publish what they want.

In addition to threats the Act poses to academic freedom and workers rights, student groups question the extent to which the Act even accomplishes its stated goal of increasing accountability.

That the legislation is being introduced in a context where tuition has been deregulated and students excluded from the Memorandum of Understanding between the government and universities is “nonsensical” says Students NS Executive Director Jonathan Williams.

Williams says that conditional funding isn’t necessarily a bad thing, insofar as it’s one of the best ways for governments to enforce accountability in areas such as the quality of education.

But whether or not that conditionality is good for students depends very much on the specific measures put in place, he says, and it’s far from clear that this Act contains any of those measures.

Acadia President Ray Ivany, past Chair of the Council of Nova Scotia University Presidents (CONSUS), has said that university presidents are supportive of the legislation.

That statement should raise a red flag for university employees and students, says Michaela Sam, Chairperson of the Nova Scotia branch of the Canadian Federation of Students.

It’s telling that CONSUS endorses the legislation, she says, because it “gives more power to those university administrators who have historically mismanaged funds and removes the rights of students and workers to participate in the way that universities are governed.”

Rather than enforcing accountability, Sam suggests that the Act is ultimately part of the Liberal government’s “vendetta against organized labour.”

Redefining the Role of Universities

By limiting the power of organized labour and silencing the voices of students, the Act will facilitate universities cutting costs and increasing revenues – in other words, acting more like businesses – but such changes won’t come without a redefinition of the university as such.

“The health of the university system has for some time centered on the belief that the universities are not meant to be corporations,” says Brown. “That’s increasingly, sadly what [they] appear to be becoming.”

For all its vaunting of accountability, the legislation mostly shows the extent to which the accountability that matters most – the kind that exists between university administrators and the faculty and students for whom the university exists – is fundamentally broken.

The Act is expected to move quickly through the House, and could be before the Law Amendments Committee as early as Monday or Tuesday.