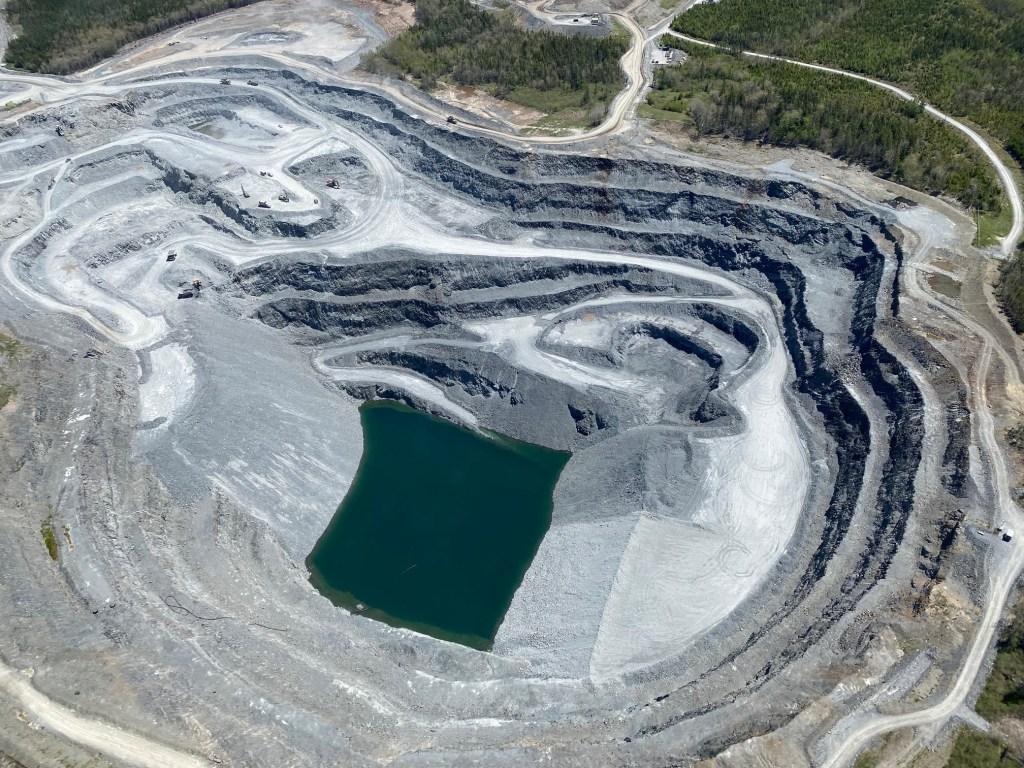 This contributed photo shows waste rock being trucked into and levelled at the bottom of the open pit of the Atlantic Gold’s Touquoy gold mine.

St Barbara Ltd, the Australian mining company that owns Atlantic Gold and Atlantic Mining NS, which operates the Touquoy open pit gold mine in Moose River, is in trouble.

This week, St Barbara’s share prices crashed 14% “to a multi-year low,” after the company released a statement that warns of “near-term risk of disruption” at its Touquoy mine because of what it called “permitting delays for tailings,” and also a “strategic review,” which could lead to its selling of its Simberi gold mine in Papua New Guinea.

That means that two of the three gold mines St Barbara operates — the one in Canada and another in Papua New Guinea — are not exactly glittering success stories.

The June 22 announcement, which is authorized by St Barbara’s Managing Director and CEO Craig Jetson, states that if the company doesn’t get what it wants from Nova Scotia Environment and Climate Change (NSECC) by August 2022, it could suspend operations at the Moose River open pit gold mine, and place it in “care and maintenance.”

The statement lays out the company’s problems in Nova Scotia this way (emphasis added):

In 2020 the Atlantic Operations commenced the provincial permitting process to convert the Touquoy open pit into a Tailings Management Facility (TMF) upon completion of open pit mining. This longer term strategy for tailing deposition has always been in the life of mine plans for Beaver Dam and Fifteen Mile Stream but has now become critical path for business continuity as the Touquoy mine approaches end of life.

Late in the process the Nova Scotia Department of Environment and Climate Change (NSECC) has sought further clarification on aspects of the in-pit tailings deposition application to which the Company is promptly responding. This request for further information has impacted the implementation timeframes for the in-pit tailings solution placing business continuity at risk. The current TMF has capacity only until mid-September 2022 and construction work on the in-pit tailings infrastructure will be unable to be completed in time.

The Company has therefore elected to make an application to raise the existing TMF wall as an interim solution while the in-pit deposition matter is progressed to conclusion. A permit application to lift the wall has been submitted and the Company is working closely with provincial regulators, with the timeframe for a decision on this permit expected to be early August 2022. The capital cost for the tailings lift is ~A$6m [about Cdn $5.4 million] and will extend the life of the Touquoy operation until the end of FY23 [Fiscal Year 2023].

Should the TMF lift permit not be approved in early August 2022 there will be insufficient time to allow for the construction of the raise before the current tailings capacity is exhausted in mid-September 2022. This would lead to the operation being suspended and placed in care and maintenance.

A few things are missing from that version of the history of the Touquoy mine. 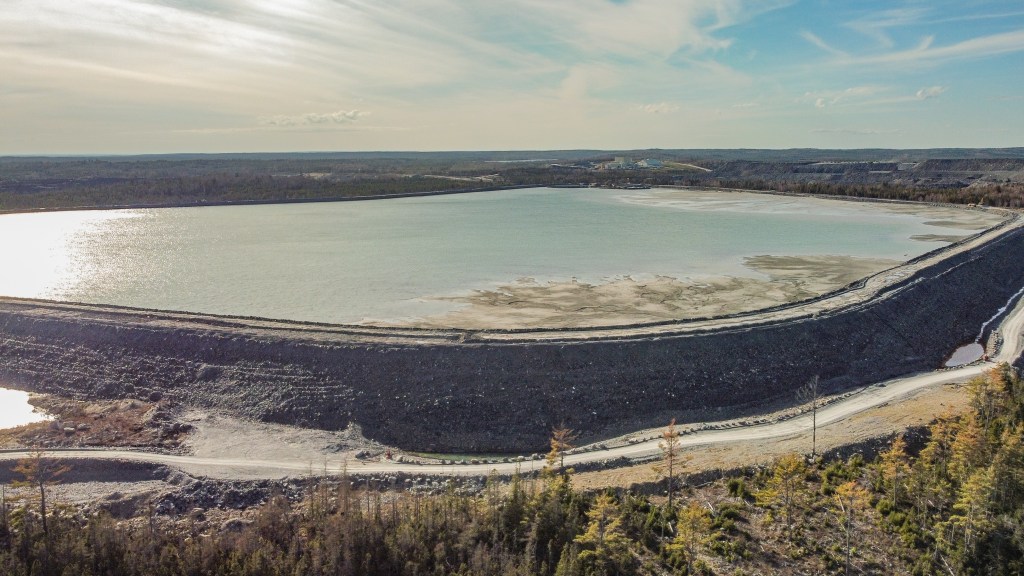 First, when the Touquoy mine was originally approved back in 2008, as proposed by the Australian company DDV Gold, there was no mention of other mines at Beaver Dam and Fifteen Mile Stream that would also be depositing tailings at Touquoy.

When the first industrial approval was issued for the mine in Moose River in 2012, it was for a single mine, and there was no mention of tailings — the toxic mixture left after rock is crushed and gold extracted from the ore — from other mines going into the tailings facility.

It was only in subsequent years, after DDV Gold shape-shifted into Atlantic Gold, that a new scheme was hatched for the “Moose River Consolidated Project,” which would involve three additional open pit gold mines along Nova Scotia’s Eastern Shore at Beaver Dam, Fifteen Mile Stream, and Cochrane Hill on the St. Mary’s River near Sherbrooke, all of which would be trucking crushed ore back to Touquoy for gold extraction.

At the time, Atlantic Gold described its expanded plans for mines in eastern Nova Scotia as its “string of pearls” and in a 2018 presentation, described the region as “backyard Canada.” 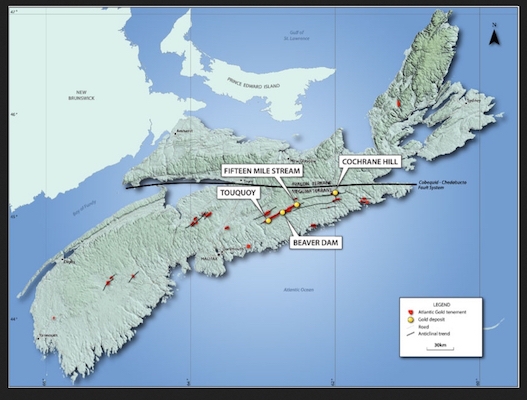 After St Barbara acquired Atlantic Gold in 2019 for $722 million, the Atlantic Gold website disappeared, along with those presentations and the use of the term “Moose River Consolidated Project,” which might have prompted an assessment of the cumulative impacts of the “consolidated” project, rather than individual federal impact assessments that are now ongoing for the three additional mines.

The Eastern Shore Forest Watch Association has repeatedly asked regulators for such a cumulative impact assessment for the mines.

St Barbara’s announcement this week also suggests that the blame for the delay in the permitting for its proposed modifications of the Touquoy mine site — including putting tailings into the open pit and an expansion of the waste rock areas — is because NSECC asked for more information “late in the process.”

That’s one way of spinning the truth.

In fact, the blame for the delay in permitting for Atlantic Gold’s proposed changes can be laid squarely at the feet of the company itself.

Although St Barbara claims it started the permitting process for putting tailings into the Touquoy open pit in 2020, Atlantic Gold didn’t register the project with NSECC until July 2021.

Less than two months later, as mandated by law in Nova Scotia, Environment Minister Timothy Halman determined that the information Atlantic Gold had provided for the proposed changes to the Touquoy mine site was “insufficient to make a decision,” and informed the company that additional information was required.

As the Halifax Examiner reported in the May 20 Morning File, in September 2021, on May 12, 2022, after Atlantic Gold updated its submission, Minister Halman again came to the same conclusion, noting that the company had failed to “provide previously requested information regarding in-pit mine tailings disposal, ground and surface water, fish and fish habitat, and historical mine tailings.”

The information, Halman wrote, was required “to evaluate potential environmental effects that may be caused” by the changes.

Halman informed Atlantic Gold that it had a year to provide the “previously requested information” to Nova Scotia Environment.

Since the mine opened in 2017, the provincial government has been remarkably accommodating to Atlantic Gold.

It has never enforced a condition of the industrial approval for the Touquoy mine, which stipulated that the company was to acquire and hand over to the province a biodiverse parcel of “conservation land” not too far from Moose River to compensate for the land lost to the mine in Halifax Regional Municipality.

In 2021, NSECC allowed Atlantic Gold to start trucking waste rock into the Touquoy open pit for “temporary storage,” and then extended that permission in 2022, as the Examiner reported in the May 27 Morning File.

Atlantic Gold executives were also granted a privileged seat at the provincial government head table, in regular meetings and long discussions with ministers, deputy ministers, and a dozen public servants. Those meetings ended in early 2019 when, according to a spokesperson for the Department of Natural Resources and Renewables, the company itself requested the meetings be stopped because they had by then “an increased understanding … of the federal and provincial permitting process,” so there was “no longer a need to meet.”

None of this information about the many concessions and privileges that Nova Scotian regulators have granted Atlantic Gold made it into St Barbara’s statement about the predicament it finds itself in now.

Rather, the statement suggests that the company is now expecting even more and bigger concessions, as it continues to “work with the Provincial government to resolve NSECC’s outstanding queries on the permit for the in-pit tailings deposition.”

It sounds very much as if Atlantic Gold expects to get what it wants, and soon, or else:

The St Barbara statement also provides an update on Atlantic Gold’s other proposed mines in Nova Scotia, which it now refers to as “its longer term Atlantic Province” plan:

Permitting of Beaver Dam has reached an advanced stage, however there are ongoing discussions with the Fisheries and Oceans Canada (DFO) and First Nations groups. These discussions will delay anticipated approvals by at least six months and the Company is now targeting Q4 FY23 [fourth quarter] for the issuing of final permits. There are sufficient stockpiles in place at Touquoy to ensure continued production from the Atlantic Operations if such a delay to Beaver Dam was to occur, provided in-pit tailings deposition at Touquoy has been approved.

Beaver Dam and Fifteen Mile Stream permitting is progressing under the Federal Canadian Environmental Assessment Act 2012 (CEAA 2012) process. The Impact Assessment Agency of Canada (IAAC) has introduced a new process for Federal environmental assessment under the Impact Assessment Act 2019 (IAA 2019). St Barbara will make the applications for both projects to remain under CEAA 2012 by the end of June 2022. St Barbara is withdrawing guidance for the permit approval timeline for Fifteen Mile Stream due to application process uncertainty and it is not as advanced as Beaver Dam. A delay in the commencement of either Beaver Dam or Fifteen Mile Stream may result in an impairment charge in the FY22 financial results.

All in all, not a particularly rosy outlook for St Barbara, which also says it will be re-designing its “operating model” and rationalizing its “corporate workforce.”

Earlier this month, Steven Dean, the CEO of Atlantic Gold when it was sold to St Barbara, resigned from St Barbara’s board of directors.