You are here: Home / Commentary / Atlantic Gold says it is getting “into the halls of government” in Nova Scotia, but it has no registered lobbyist 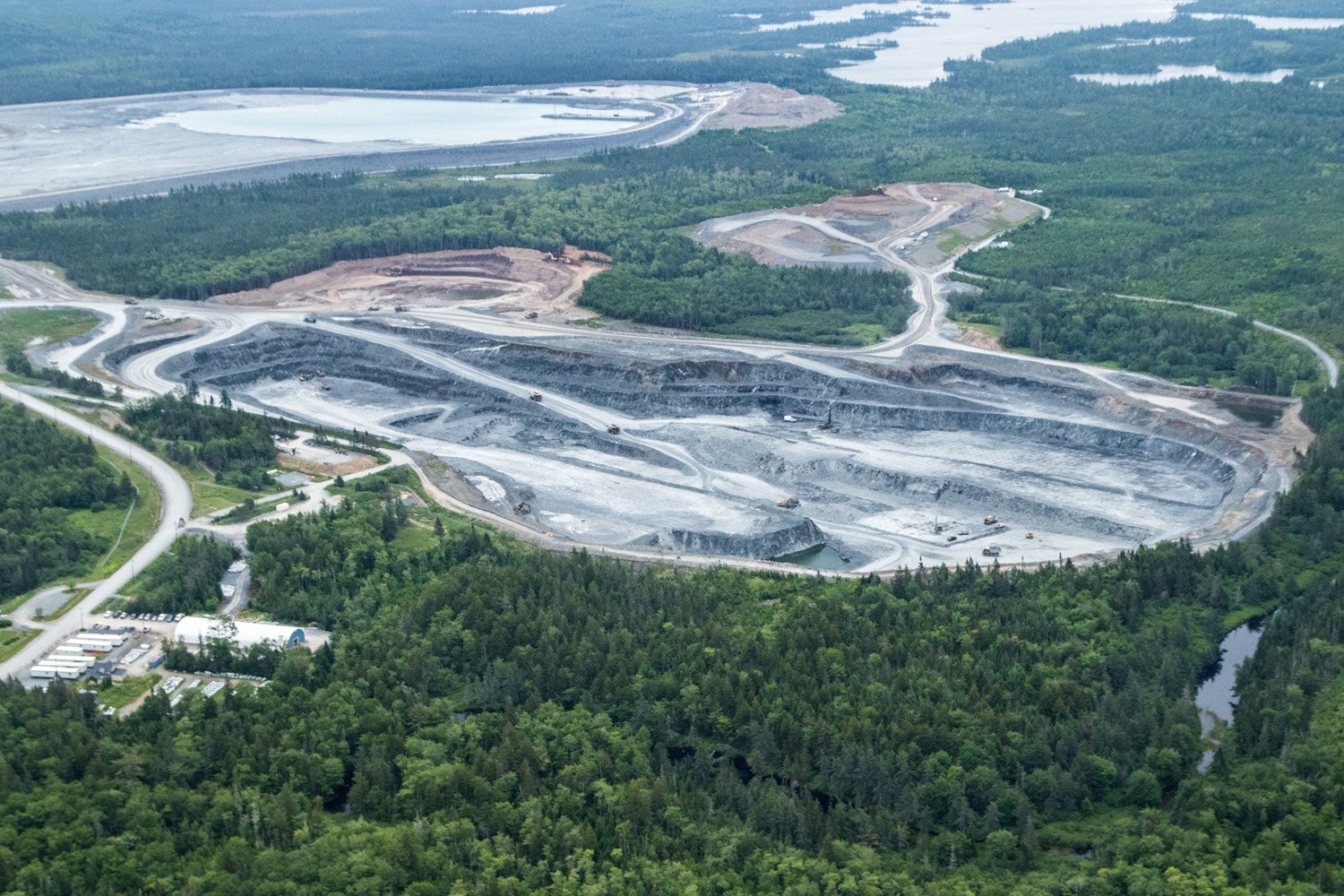 Craig Jetson, CEO and Managing Director of St Barbara — the Australian company that owns Atlantic Gold that in turn owns the Touquoy open pit gold mine in Moose River and plans to open three more gold mines along Nova Scotia’s Eastern Shore — says that he has lined up “quite a few meetings over the next two weeks with the government people” in Nova Scotia.

In an earnings call with investors on February 17, Jetson suggested that complexity of arranging such meetings at the moment is because of the departure of Premier Stephen McNeil who is handing over to Premier-designate Iain Rankin.

“So it’s been problematic to get into the halls of government in recent times,” Jetson said during the conference call. “But that will disappear.”

Atlantic Gold has no lobbyist on the Nova Scotia government’s registry, so who is it planning to send into the “halls of government” and how and to do what, exactly?

But let’s back up a bit, and do a quick recap of what St Barbara has been up to of late in trying to plead its cause with the provincial and federal governments.

On February 5, the Halifax Examiner published an article about Atlantic Gold’s lobbying blitz in Canada, which seems to be tied to its need to please investors and get federal and provincial approval for the three new open pit gold mines on Nova Scotia’s Eastern Shore (at Beaver Dam, Fifteen-Mile Stream, and Cochrane Hill) and just possibly to distract regulators and the public from the 32 environmental charges that its subsidiary, Atlantic Mining NS (which operates the Touquoy gold mine in Moose River) faces in Dartmouth Provincial Court on March 15 (something the Examiner reported on here and here.)

On January 7, 2021, St Barbara, which acquired Atlantic Gold in 2019, hired a dedicated lobbyist to plead the Atlantic Gold case with the federal government in Ottawa. His name is Tiéoulé Traoré, and he works with NATIONAL Public Relations.

The Examiner also reported that investors participating in the last “earnings call” that St Barbara’s CEO Jetson held with investors on January 26, 2021, were starting to sound a little impatient about the vagueness of the starting dates for the three proposed mines, which are currently undergoing joint provincial and federal environmental assessments with the Impact Assessment Agency of Canada.

In reply, Jetson said the company had “refocused” the business in Nova Scotia, and appointed a general manager, “to take the lead on that permitting, certainly interface with the First Nations and all the key stakeholders to make sure that doesn’t become problematic or managed accordingly and that permits are delivered on time from a sequencing-perspective and the project-perspective.”

From the February 7 Examiner article:

The appointment of the lobbyist in Ottawa and a general manager in Nova Scotia to push on the permitting appears to be just part of St Barbara’s strategy to pull strings on this side of the ocean.

A search of the Nova Scotia Registry of Lobbyists produced no results for St Barbara, or its subsidiaries Atlantic Gold or Atlantic Mining NS.

Still St Barbara’s CEO was able to speak with the Nova Scotia premier.

In his article, Beswick dutifully repeated statements made to him by the premier’s office that the two men didn’t talk about the controversial mine proposed for Cochrane Hill, which was undergoing a federal assessment.

Nor, according to the premier’s spokesperson, did the two men talk about the proposed Archibald Lake Wilderness Area, which Nova Scotia Environment Minister Gordon Wilson had announced in January 2020 had been designated for public consultation and protection.

The Parks and Protected Areas page for the new Archibald Lake Wilderness Area said it would “protect 684 hectares (ha) of woodlands, lakes and several small wetlands in the watershed of Archibald Brook, an important tributary of the St. Mary’s River.”

A year ago, as the Examiner reported here, the province announced the listing of Archibald Lake as new protected wilderness area that was open for public comment, noting it the description that:

About 10 ha around Archibald Brook is subject to mineral exploration rights. These rights can be honoured under the Wilderness Areas Protection Act, provided activities do not degrade the wilderness area.

Archibald Lake is also identified in Atlantic Gold’s description for the proposed Cochrane Hill Gold Project: https://ceaa-acee.gc.ca/050/evaluations/proj/80159?culture=en-CA. The company’s proposed use of Archibald Lake cannot be permitted within a wilderness area.

The province’s announcement that Archibald Lake was on a list of candidate wilderness areas, and that Atlantic Gold’s proposed use of the area for its mine would not be permitted, didn’t go over well with the corporation’s powers that were.

As Aaron Beswick reported, Jetson finally got his call with Premier McNeil on October 20, 2020, four days after the province announced that it was not going ahead with the Archibald Wilderness Area.

The day after that call, Jetson’s quarterly presentation to investors stated that the decision to protect “Archibald Lake (proposed water source for Cochrane Hill Gold Project)” had been “deferred by government.”

On February 2, 2021, Nova Scotia Environment and Lands and Forestry announced that the province would be going ahead with the protection of 20 wilderness areas. Archibald Lake was conspicuously absent from the list.

It no longer appears on the province’s interactive map of parks and protected areas.

Taking the NS government on a “journey”

Archibald Lake was at the centre of the question that J.P. Morgan analyst Alistair Harvey posed to St Barbara CEO Jetson during the February 17 conference call on the company’s 2021 second quarter earnings.

Jetson also said that they would be resubmitting their Environmental Impact Statement (EIS) for the proposed open pit gold mine at Beaver Dam this quarter. (As the Examiner reported here, two previous versions of the EIS for the proposed Beaver Dam mine elicited a great deal of criticism from both federal and provincial government officials.)

Specifically, Harvey wanted Jetson to say whether the three-year timeline for permitting for the proposed Fifteen-Mile Stream mine, would be “kind of what we could expect for Cochrane Hill?” And, Harvey continued, “What’s the impact of the designation of the Archibald Lake conservation area over Cochrane?”

This led Jetson to let loose an avalanche of words:

Yes, so let me start on the ground because — and work it up for you. I think the move of late, in particular, coming out of the GM-Ops [assuming he means the new general manager permitting] roles go in and lead the investor government relations side of their business on Atlantic projects and making sure that we’re working very closely with the First Nations people, all the government people, including, of course, the regulators. So we understand what the impact of delays in permitting and sequencing will mean. That’s gone very, very well and led to certainly line myself up quite a few meetings over the next two weeks with the government people.

The complexity at the moment is the current government has changed its leader. And they’re going through whatever the new leader will go through. So it’s been problematic to get into the halls of government in recent times, but that will disappear. So we’re doing all the groundwork and all the communication that we need to do to make sure we understand the impact.

In terms of, I guess, Cochrane Hill, in particular, or Fifteen-Mile stream, they’re coming along quite well. The engagement is going well. Permits are certainly well advanced in their application stage. Now that’s about all we can manage. We need to make sure that the community engagements, right, the permitting process is lined up to when we need the ore and, hopefully, in most cases, before we need the ore. That’s the plan that we’re working towards with some flexibility in that. And Cochrane Hill, that’s eight, nine years away before we need to start moving and turning some dirt to realize that project online. But we’ve started the environmental work now. We have submitted some of the documentation already this month, and we’re doing the community engagement, government engagement.

In terms of it [Archibald Lake] sitting there, the reason that it’s sitting there and not a protected wilderness area at this point is because of the many different reasons by the government, but the government yet haven’t been convinced that we can mine environmentally friendly or we can’t. And given, I guess, we need to prove that we possibly can and take the government on the journey that we can, we believe that there will be a positive outlook on that particular facility in time. So these sorts of areas around permitting are always a challenge and a risk to any project no more than ours, but we certainly have the right team, the right strategy, the right engagement plan to be able to make sure that these mines come on sequentially, and there is no gap in between. And of course, we’ve got some very encouraging results out of the tenements with their own exploration as well. So the current operation is going exceptionally well that’s creating enormous employment.

The Cochrane Hill community are certainly reached out and are very interested in local employment, local training and youth development and training in their region, and we get that far as well. And those conversations have already started. So we’re demonstrating that we can operate in an environmentally friendly way at — Touqouy, for example, is certainly a significant pathway to success for the rest of the permits. [emphases added]

Although it’s not easy to find much clear meaning in that jumble of rhetoric, I think it’s safe to say that Nova Scotians should keep a very close eye on the calendars of the new premier, his close advisors, and his new ministers in coming weeks, to see what kind of “journey” Atlantic Gold intends to take the provincial government on.