You are here: Home / Environment / Activists “occupied” North Mountain to stop herbicide spraying, but how big of a victory was it? 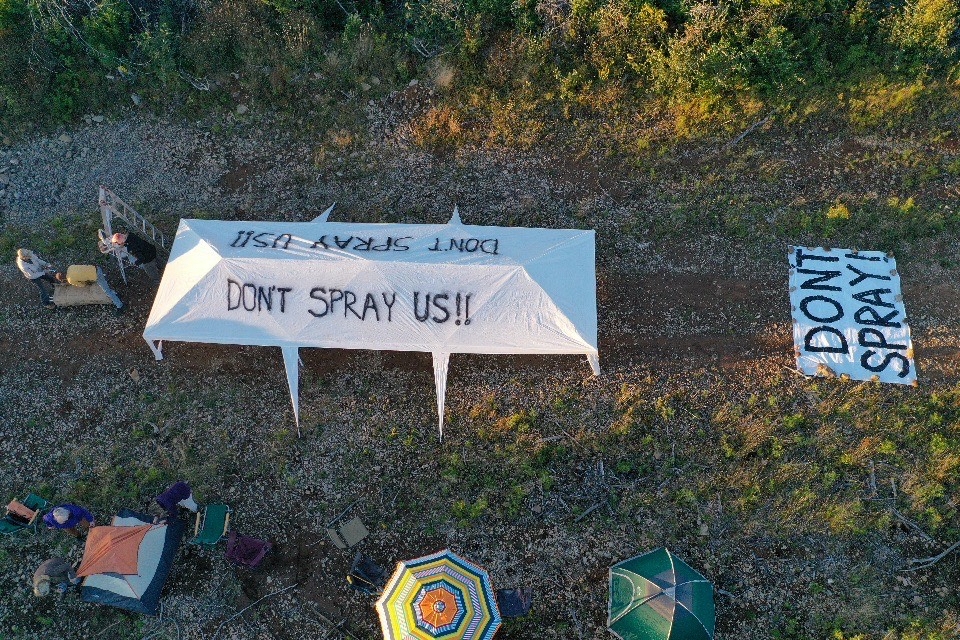 On Saturday September 26, the group “Don’t Spray Us – Nova Scotia Action” posted “good news” on its Facebook page with this update from Extinction Rebellion:

NS Dept of Environment has informed us definitively that there will be NO further spraying of aerial herbicide on private land in Nova Scotia this fall. The area we are currently occupying in Hants County has not and will not be sprayed this year. Citizens standing up together make a difference. It is time to end toxic forestry in Nova Scotia. Stop spraying and clear cutting. — WE NEED A GOVERNMENT COMMITMENT TO THIS — FOREVER! No more cat and mouse!

As the Halifax Examiner reported here, on September 1 a group of Kings County residents launched a campaign to have Nova Scotia Environment cancel the permits it had issued to Century Forest Consultants for spraying glyphosate-based herbicide on a private woodlot on North Mountain. The residents set up camp on the land which had been clearcut and was slated for spraying, effectively “occupying” it.

A few days later, Century Forest Consultants informed Nova Scotia Environment that it would not be spraying that parcel of land.

Campaigners from the Stop Clearcutting and Spraying Nova Scotia group and Extinction Rebellion then launched a similar protest in Annapolis County county, and garnered support from the municipal council.

As Lawrence Powell reported, municipal councillors in Annapolis County held a special meeting to discuss the issue, and wrote to the Departments of Environment and of Lands and Forestry, and to Premier McNeil, asking the province to place an “indefinite moratorium on glyphosate spraying” in the county.

In the end, the spraying in Annapolis County was also called off.

The groups were already gathering last Friday for a similar protest against spraying of a private woodlot in Hants County, when Don Osburn, one of the organizers of the North Mountain protest, called the Department of Environment office in Amherst to find out when the spraying was slated to happen.

He was told that all the aerial spraying was finished for the year.

Some interpreted this as a sign that “the social license to spray NS forests has expired.”

That optimism turns out to be a little premature.

The Examiner emailed the Department of Environment to ask for confirmation that there would be no further aerial spraying on private Nova Scotia woodlots this year, and if that were the case, why.

This is the reply from NSE spokesperson Barbara MacLean:

Century Forestry advised Nova Scotia Environment that they had finished their spray program for 2020 due to hurricane Teddy.

All other sites listed here have completed their spraying program for the year. The spraying season has ended.

The link Maclean provided is for the original list of 43 sites that the Nova Scotia Environment approved for aerial herbicide spraying this year by Century Forestry Consultants and J.D. Irving Limited, for a total area of 1,498 hectares (3,702 acres).

Of these, it would appear from MacLean’s reply, only four were not sprayed — one in Kings County, one in Hants County, and two in Annapolis County, for a total of just 249 hectares (615 acres).

The rest of the sites — in Colchester and Cumberland Countries — were presumably sprayed, as MacLean told the Examiner that the other sites had “completed their spraying program” this year.

In a telephone interview, Nina Newington of Extinction Rebellion Annapolis County said it’s “not a total surprise” that the spraying went ahead in Colchester and Cumberland Counties.

But, she added, “It’s really disappointing to hear that they succeeded in poisoning as much forest in Nova Scotia as that,” she said.

Newington said there is an important follow-up needed, to check those sites to see if the contractors put up the orange stickers they are supposed to put on the warning signs after spraying. She also notes that the warning signs that are to be put up at access points to the lands to be sprayed are often very difficult, even impossible, to find.

Newington believes much more public notification is needed because, in her view:

For the spraying to work, there has to be enough poison to kill off all of that broadleaf growth. That means that pretty much every frog and amphibian in the area is going to get glyphosate on its skin and that’s a death sentence for amphibians because they breathe through their skin. And you start thinking about the birds eating the seed and the hunters hunting the deer, and the whole food chain. If you’ve recently sprayed and somebody like me that likes to go out berry-picking goes out berry-picking there’s really almost nothing that’s going to warn you.”

Don Osburn told the Examiner in a phone interview that it is still a “big victory” that four sites were not sprayed this year. He said it is impossible to know whether their occupation of the parcels helped deter the contractors and landowners from going ahead with the spraying in the Hants, Kings, and Annapolis Counties. But one thing he is sure of is that “Nova Scotia Environment didn’t do a damn thing.”

Osburn said he was particularly impressed that the Annapolis municipality backed their cause.

Although spraying is finished for this year, Osburn says the coalition of those who protested it this year are already looking ahead to next, when they intend to focus on what he says is the “real issue” — clearcutting.

“In the spring it’s going to take blockades of clearcuts,” he said. “And in the fall a lot more people occupying sites where aerial spraying is approved.”

“We’ll be getting in their way,” said Osburn.