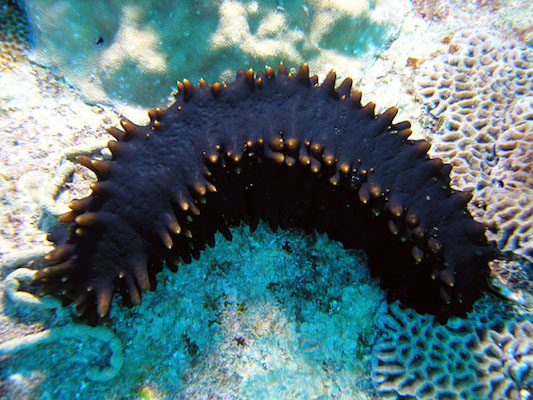 The sea cucumber, an alleged aphrodisiac, is getting Nova Scotians excited.

ACOA is extending a $500,000 loan to Ocean Pride Fisheries to develop products from sea cucumbers, reports the CBC:

A relation of sea urchins and starfish, sea cucumbers are caught by dragging a narrow roll bar, which skips along the ocean floor.

The company has an enterprise allocation quota for 771,100 kilograms caught off the coast of Nova Scotia. It currently employs about 70 people on a seasonal basis and will add another 25, according to [Ocean Pride president Jules] Leblanc.

“This is a company that innovates and adapts,” Fraser told CBC News. “This is going to be the way of the future in creating economic growth in Atlantic Canada.”

Wait minute…. what happened to the herring? Oh, this:

The South West Nova herring fishery was once a major industry in the Yarmouth region — it kept five, 1,500-tonne-a-day reduction plants in the area operating, as well as stocked a number of factory freezer trawlers from the defunct U.S.S.R., which paid a regular call each summer to the area.

At that time, during the 1970s, there were 49 herring purse seiners taking part in the fishery — some of them from as far away as British Columbia.

The west coasters were here because their herring fishery had collapsed due to overfishing.

But that couldn’t possibly happen to sea cucumbers. Right?

Regardless, much of the sea cucumber industry seems to be built around the creature’s use as a supposed aphrodisiac:

A distant relative of sea urchin, sea cucumber is not a vegetable at all, but a strange little echinoderm with a phallic shape. Sea cucumber is found around the world, but is most popular in Asia where the Chinese, Malaysians, Koreans and Indonesians consider its flesh a delicacy.

The Chinese, on the other hand, seem to love their phalluses and eat them, too. The Chinese are among the world’s biggest consumers of sea cucumber and use it to treat high blood pressure and joint pain as well as low libido. (The Chinese name for sea cucumber is hai shen, translating roughly into “sea ginseng.”) Throughout Indonesia, sea cucumber is considered to have many healing uses. Because the sea cucumber is one of the earth’s oldest living creatures (it has existed for over 500 million years), the slug of the sea has developed an extraordinary immune system – and one that, surprisingly, resembles that of humans. Early studies in the 1980’s and 1990’s examined a potential for sea cucumber extracts to speed the healing of wounds and even reduce scarring, aid in the treatment of HIV and potentially slow the growth of cancer. As a homeopathic treatment, sea cucumber is often dried and sold in capsule form. In many parts of the world, these pills are marketed as a natural alternative to the drug Viagra. [emphasis added]

And that seems to be Ocean Pride’s target audience. As the CBC explains:

Ocean Pride Fisheries Ltd. says it will use the $500,000 to buy new equipment to eliminate waste and create so-called nutraceuticals from the bottom-dwelling invertebrates caught off the coast of Nova Scotia.

Nutraceuticals are components of food used for medicinal purposes.

“One product is an oil, there is another is dried. We’ll have multiple products from this,” said company president Jules LeBlanc.

Sea cucumbers are sold as a health food, primarily in Hong Kong, mainland China and Korea.

Like “innovation,” “nutraceutical” is a bullshit term meaning whatever you want it to mean, but it is often used as an euphemism for “aphrodisiac.”

Er, not to be Debbie Downer here, but should the Canadian government really be in the business of producing Chinese boners?

We’ve been down the government-backed quack homeopathic medical product road before, and it didn’t end well.

One of Nova Scotia’s iconic and most visited landmarks will be safer as a result of improvements that will be made at Peggy’s Cove.

Based on recommendations made by a task team of members from the community and local organizations, government will make the following improvements:
— new and enhanced safety signs will be installed in the coming weeks
— a video warning message will be played at the visitor information centre
— tourism staff will improve communications with visitors and tour operators
— interpretive panels will be installed describing the strength of the ocean
— a social media safety campaign at the start of this tourism season

The Sou’Wester Restaurant will also install rock barriers around the parking lot to guide visitors towards warning signs.

Business Minister Mark Furey told the Canadian Press the changes will cost about $25,000.

The trick is balancing taste and safety. We don’t want to overrun the place with fences and warning signs, but at the same time we should take reasonable steps to alert people of the danger. The changes announced yesterday seem reasonable, but I think that the actual number of people killed on the rocks should be part of the new signage, to drive the message home.

The financial statements were presented to the public at the port’s inaugural annual general meeting on March 12, at which time CEO Marlene Usher said the port “has been self-sustainable,” and presented documents for the first 11 months of operation showing the port had an estimated fiscal year-end surplus of about $20,000 on a $1.6-million annual budget.

However, the documents also show Usher’s $200,000 salary is subsidized with an annual injection of $100,000 from the Cape Breton Regional Municipality. The other half is paid by the federal Atlantic Canada Opportunities Agency, where she was employed before taking a three-year secondment to the port.

The documents also show the port has not paid back about $1.5 million in lease fees it owes the regional municipality for the use of the Joan Harriss Cruise Pavilion, which is owned by CBRM. That amount is expected to climb to $1.9 million by the end of the next fiscal year.

Usher said at the annual general meeting that the port plans to pay back the lease fees over a 10-year period starting in 2018, with no interest charges, but did not say what new revenue stream could be expected to cover those fees.

With a small $20,000 surplus this year, it’s difficult to see how the port can afford to pay the back rent.

And with the CEO’s salary subsidized on an annual basis and the operation currently carrying a $1.5-million – and climbing – liability for lease fees, it also calls into question Usher’s use of the term “self-sustainable.”

The Port of Sydney is Cape Breton’s counterpart to the Halifax Convention Centre: a financial wreckage in the making, but the town mucky mucks can make it sound just plausible enough to hoodwink the public while the mucky mucks rake in the grift.

Examiner contributor Sue Donem has the latest news on the provincial film industry:

Premier Stephen McNeil was asked to speak about the future of Nova Scotia’s film industry at the Nova Scotia Innovative Vision & Bold Craft Dinner Charcuterie Board Meeting last night. “It’s like a Lite Brite,” said McNeil, “but before you put the picture thing on it. That’s how bright it is. It’s blindingly bright. I had a Lite Brite once.”

Nova Scotia’s film industry took a huge hit, after the film tax credit changes were implemented in July of 2015.

Asked how his government plans to help the few remaining media production workers left in Nova Scotia, McNeil suggested that they work for a bank. “Banks are nice because they have money in them,” stated McNeil. The Premier was reminded that banks tend to pay their starting tellers barely over minimum wage in Nova Scotia. “I think that’s very something,” said McNeil.

Questions concerning the Nova Scotia Film and Television and Video and Business and Marketing Incentive Fund’s (NSFTVBMIF) ability to revive the film industry were met with great enthusiasm by McNeil, stating, “I really love the new name. It’s longer than the old name, and I think that says a lot for innovation. The film industry here is very creative, and I have every faith that they will come up with some kind of way to make movies with smart phones and other cutting-edge disruptive technology. They are true visionaries who envision a lot of visible things. Lite Brite started as an idea, and now it’s more than just a concept because it’s bright. And that’s the future of film in Nova Scotia.”

McNeil unveiled the marketing video for NSFTVBMIF. Although Bruce Springsteen wrote the song, no one quite delivers it like McNeil’s “favourite movie star,” Manfred Mann.  The Premier has offered to send a Lite Brite to anyone who can choose the correct lyric to the second line of the chorus below:

Budget pressures are bringing public libraries in rural Nova Scotia to their knees. Staff hours are reduced, entire programs are eliminated, and branches are cutting back on opening hours.

“We will have to cut hours,” says Eric Stackhouse, chief librarian for the Pictou-Antigonish Regional Library. Which in turn will cause a lot of part time staff to lose their benefits, because of the way the insurer contract is structured.

The situation is even more dire for the Eastern Counties Regional Library, serving Guysborough, Inverness and Richmond Counties.

“All in preparation of yet another year of zero funding increases,” she adds. “We are literally at the lowest we can go. We are there now. We are done. Next thing to go is books.”

Now we have Saputo Inc. closing its dairy production facility in Sydney, and with it goes 100 jobs.

Losing that amount of jobs may have little effect on a larger city like Halifax but it certainly will hurt our economy.

I say its time to turn the page on businesses that move elsewhere and boycott their products. 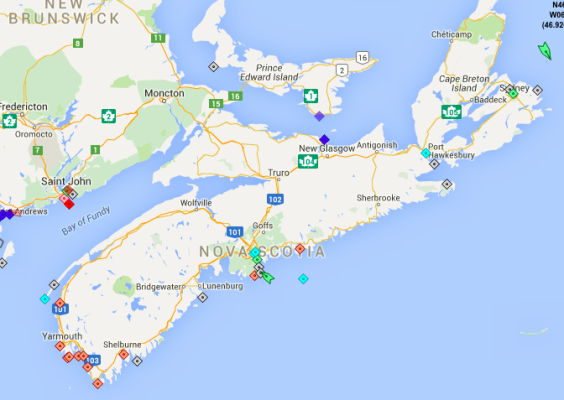 Dinkeldiep, general cargo, Saint-Pierre to Pier 42 at 8:20am, then sails back to Saint-Pierre at 4:30pm
John J. Carrick, tank barge, parts unknown (to me) to MacAsphalt at 9:30am
Elka Elefsis, oil tanker, Houston to Bedford Basin anchorage at 4:30pm 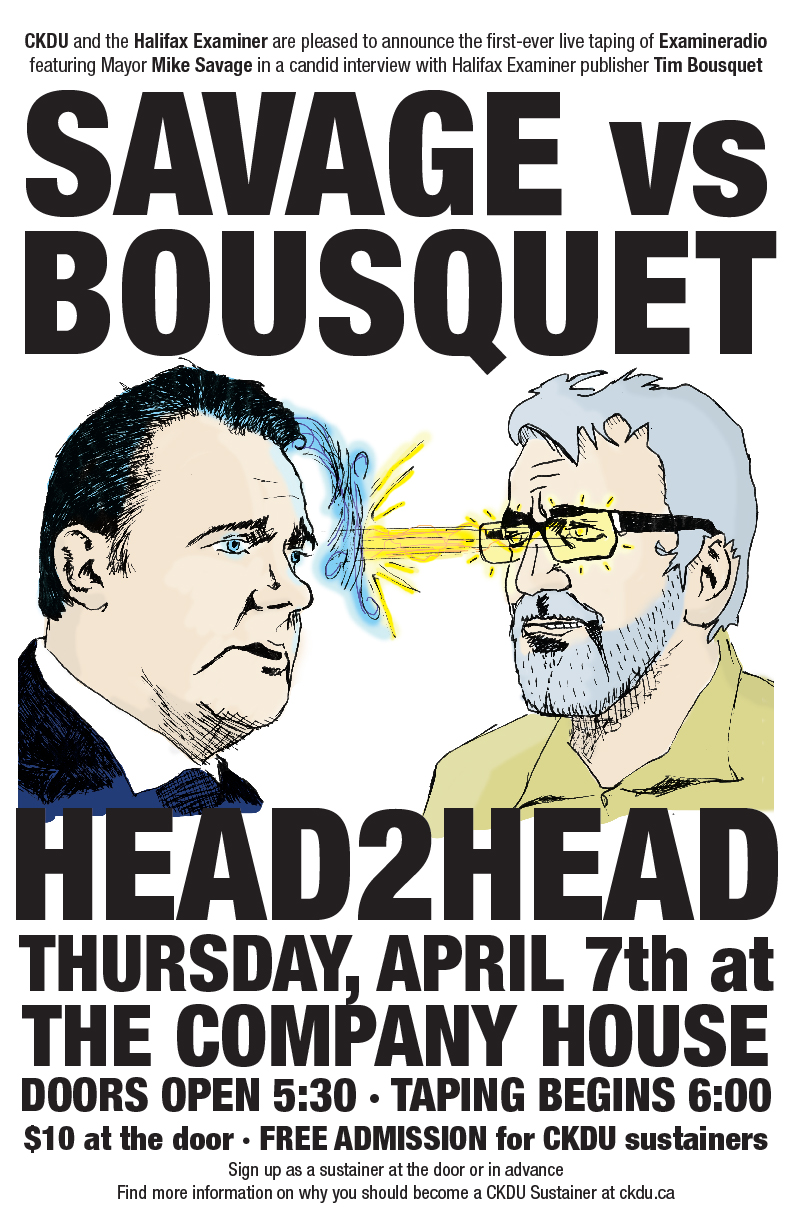