You are here: Home / Commentary / Access denied: the Nova Scotia Health Authority refuses to share the results of its transportation survey

Last November, the QE2 Redevelopment Project very wisely conducted a survey of its staff, asking about how they get to and from work. I heard about the survey from a QE2 staffer, and immediately decided to ask for a look at the results.

In Halifax, we don’t have too much in the way of detailed transportation data. The census “journey to work” section gives us the commuter mode share per census tract unit, which means it tells us how people get to work depending on where they live. This QE2 survey, on the other hand, promised to tell us something new: how people got to and from work according to where they worked. So naturally, I was interested.

I first requested the results of the survey, as well as the context around it, back in November, and was told by communications adviser Kristen Lipscombe that “we’d be happy to have someone chat with you about the results, how they were analyzed and what role they will play in QE2 redevelopment.” I just needed to wait until the results were ready, at the end of the month.

Unfortunately (mea culpa), I left it until the following spring to send my followup request for the results of the survey. In early March, a new spokesperson, Nicole de Gier, informed me she could share high level findings, though not discuss their impact on the QE2 project. I wrote back asking for just the data from the survey. De Gier wrote back to say, ”it’s unlikely that we’ll be able to share the results of the complete survey as it contains confidential staff/physician information.”

I immediately replied explaining that my interest was purely in the numbers, and I did not require any personal information on the survey respondents.

De Gier wrote back to say no again, because “the majority of the data/information from the survey is part of the master planning document, which is not yet public.”

The denial seemed… gratuitous. I mean, the survey results can obviously be separated from the master planning document. De Gier was essentially blowing smoke.

So on March 13th I paid my $5 and submitted an access to information request through the province’s handy FOIPOP site (landing my personal info in amongst the pile that a curious teen would later get arrested for downloading). I asked, simply, for “the results of the QE2 Employee Transportation Survey conducted in November 2017.”

By March 15th, I had my answer: access denied.

Fola Adeleke, the Freedom of Information Officer at the Nova Scotia Health Authority, cited two sections of the FOIPOP Act in issuing their decision: “section 14 (advice to public body), and 17 (financial or economic interests).”

But of course, the tally of answers to questions like, “How did you travel to work today?” and, “If you drove to work today, where did you park?” are not “advice”; they are simply data. Certainly they will be used by advisors to give advice, but they are not that advice. 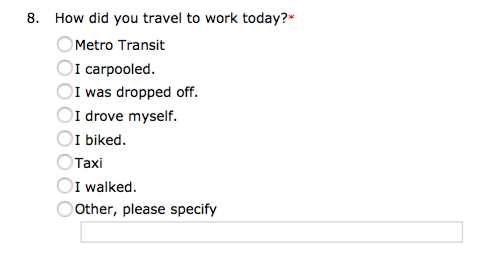 Screencap of question from the QE2 Redevelopment Project Transportation Survey.

As for financial or economic interests, well, I’m just not sure that the answers to, “Did you travel between the Halifax Infirmary campus and the VG campus for work today?” or “If you usually drive to work, which one of the following alternative ways of travelling would you consider?” have the potential to make or break the financial viability of the Nova Scotia Health Authority.

Since I was unable to fathom the logic involved in the denial of access, I decided to ask for an appeal on the question. There’s actually an office for that: the Office of the Information and Privacy Commissioner, headed up by Catherine Tully. When Tully’s office called to tell me how they would handle the review (by getting a copy of the requested material themselves and assigning an investigator to assess the claims made in the denial of access), I finally felt like perhaps there was some sanity in the world.

This might be a good time to recall that all of this is over the results of a transportation habits survey of hospital staff in Halifax. There’s not a whiff of controversy anywhere near it. It’s just, you know, kind of interesting to find out how people are getting from A to B. It’s, you know, kind of my job.

Now if you are a Nova Scotian you will already know that no, the Office of the Information and Privacy Commissioner did not come swooping in, set everything straight, and get me my Excel spreadsheet. First of all, their decisions are not binding. So although I like to think a review in my favour would get Fola Adeleke and the Nova Scotia Health Authority to change their minds, it might not.

Second of all, requested reviews are processed in the order they are received. And currently, the voice on the phone informed me, they were processing reviews from 2016. That’s a two-year backlog. Or as I like to think of it, open season on access denial. What little accountability there is for governments needlessly withholding information is practically nullified by a two-year long wait.

And what’s worse, it’s a feedback loop. The easier it is for government departments to deny information without oversight, the more needless access denials will be made. This in turn will spark more appeals for review, thereby increasing the time they will take to process.

So, while the FOIPOP office continues to deal with the outfall from its security failure (the website is still not back up and running as of publication time), the more worrying scandal for me is that provincial government bodies like the Nova Scotia Health Authority are gratuitously denying people information, and there’s effectively no-one to stop them.

I mean, heck, I just wanted to know how many doctors take the bus.