Halifax councillors aren’t ready to allow unhoused people to camp in parks without the threat of criminalization.

The bylaw bans camping in parks, but as Leslie Amminson reported for the Halifax Examiner earlier this month, P.A.D.S. has been meeting with councillors and the mayor to ask them to invoke an exemption built into the bylaw, and grant people permission to seek shelter in parks.

Not doing so will continue a cycle of criminalization for unhoused people, Saunders argued. 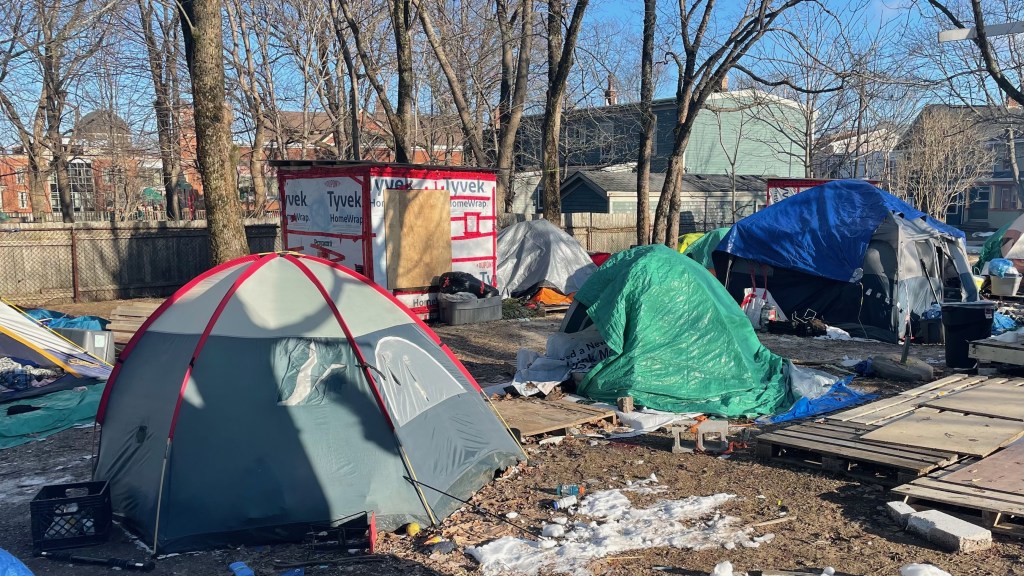 Saunders argued HRM should atone for its actions on August 18, 2021, when the municipality ordered the police to clear people’s tents and emergency shelters from municipal parks. That ended with protesters arrested and pepper sprayed in the streets of downtown Halifax.

“The HRM has a responsibility not only to formally acknowledge its human rights trespasses, but to ardently work towards ensuring that the HRM never again participates in or partners with police to enact and such human rights violations,” Saunders said.

Since then, the situation has only worsened, with a net loss of shelter beds, Saunders told councillors. There were about 400 people without shelter last August. According to the Affordable Housing Association of Nova Scotia, there are 547 people experiencing homelessness in HRM as of April 19.

“We do not expect the HRM to resolve a growing global humanitarian crisis. We also recognize that housing is the jurisdiction of the province and the federal government,” Saunders said. “But we do expect the HRM to do all that it can to reduce the harm experienced by unhoused persons. This means that HRM council should stop criminalizing people who are experiencing homelessness. To do so, we ask that the council use the discretion it has under Bylaw P-600 to permit people to erect structures and seek shelter in municipal parks.”

“It feels like you’re spinning your wheels here, basically, because the more we do, the more that’s needed, and it just seems to be the less support we’re getting,” Blackburn said.

Coun. Sam Austin said he feels it would be better to allow some sheltering in parks, rather than a blanket allowance.

Coun. David Hendsbee agreed, arguing that it would be wiser for HRM to exempt specific parks instead. Hendsbee also leaned into the well-trodden council excuse: it’s the province’s problem.

“I’m surprised you haven’t asked the province for allow for free camping and provincial parks or ask for the private citizens if they have a free yard people can pitch a tent on,” Hendsbee said.

“I think that you should be a little more realistic and trying to target a particular location that perhaps can work that we may give an exception rule to. That’s our preferred approach, but across the board? I can’t see that happening.”

Maggie MacDonald, municipal executive director of government relations and external affairs, said Max Chauvin, who used to run the Dartmouth Sportsplex, has been contracted to work on solutions to the housing crisis. He’s expected to table an interim report in the coming weeks.

“We’re sort of framing it up around short, medium, and longer term approaches and that will include sort of a range of activities, including consideration to sleeping rough and how we may be able to to treat that going forward,” MacDonald said.

No councillor moved for a staff report specifically on enacting the exemption under Bylaw P-600.