You are here: Home / Commentary / Yoko Ono’s Imagine Peace Tower will be lit up tonight

A relative newcomer to Nova Scotia, I’ve not yet visited Sydney. However, in addition to its fabled Big Fiddle, the city has loomed large in my reporter’s imagination because of John Lennon. For it was in May 1969 that Lennon conducted a surprise live interview with an audibly stunned Sydney disc jockey.

At the time, the Beatles musician and his wife Yoko Ono were protesting the Vietnam War through a “Bed-in-for-Peace” from their room in Montreal’s Queen Elizabeth Hotel. There, clad in pyjamas and surrounded by supporters, they’d record the celebrated anti-war anthem “Give Peace A Chance.”

“I never dreamt … that I’d ever be able to talk to you about [the Bed-in] personally,” a gobsmacked Rick Honey told Lennon at the start of the interview on CJCB radio in Sydney. About the event, Lennon (who’d soon bid farewell to the Beatles) said that the protest had “proved that people … are open to the suggestion of peace.” “Big businesses can sell almost anything if they keep plugging it,” he continued. “We want to [keep] peace in the public eye.”

Toward the end of the broadcast, Honey asked Lennon if he thought he’d live to see his vision of peace realized. “I certainly do,” he declared. “… Peace is the only answer.”

Fast forward and on December 8, 1980, Lennon, 40, was shot and killed outside of his New York apartment building by a deranged fan. A print of the iconic Annie Leibovitz portrait of Ono and Lennon, taken earlier that day, remains mired in a tax scheme morass at the Art Gallery of Nova Scotia and unviewed by the public. 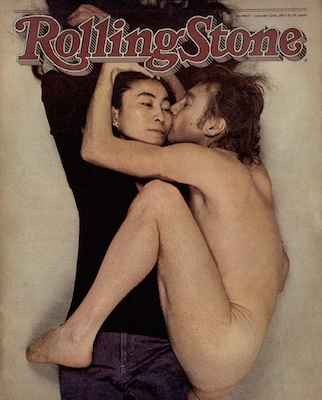 Tonight, Yoko Ono will mark what would have been her husband’s 78th birthday with the annual lighting of the Imagine Peace Tower on Videy Island, off the coast of Reykjavik, Iceland. The multimedia artist offers free round-trip ferry rides from Reykjavik to all who wish to attend the event.

Conceived by Ono and unveiled, in 2007, as a memorial to Lennon, the white stone outdoor sculpture is shaped like a wishing well and inscribed with “Imagine Peace” in 24 languages (including Inuktitut). Projecting a vertical column of light as high as 4,000 metres into the sky, the Tower remains illuminated until the anniversary of Lennon’s death and is re-lit on other select dates, including the Winter Solstice. 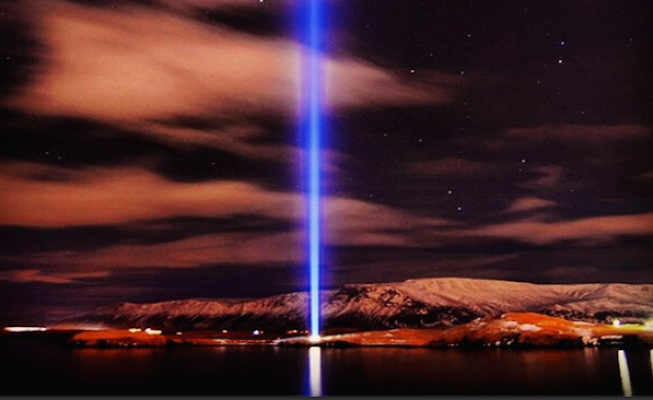 Ono said she installed the work in Iceland because of the country’s progressive social and environmental policies, especially its wide use of geothermal energy. Indeed, the electricity for the Peace Tower is produced entirely from geothermal power. By contrast, the Nova Scotia government has fist-bumped a private company in Brookfield that plans to burn, for “fuel,” 350,000 tires a year. Imagine.

I recently made my way to Videy Island where, under a brilliant blue sky, I visited the Peace Tower and revelled in the pristine beauty of the landscape. There, I was reminded that Iceland ranks first (out of 144 countries) for gender equality, notes the 2017 Global Gender Gap Report from the World Economic Forum. Canada clocks in at 16th.

Moreover, Iceland is the only country that jailed bank executives in the aftermath of the 2008 financial crash. An Icelandic woman who decried the crisis as a “man-made, penis competition” among bankers was cheered throughout the land. Today, women run most of the nation’s major financial institutions. “We trust them,” an Icelandic man told me. “They won’t fleece the people to line their pockets.”

In addition to my general interest in visiting the Peace Tower, I was drawn to Videy Island for another reason. The 1990s found me struggling to complete a major book project. As the years ticked by — two, three, then four — past my contracted deadline, I was beset with panic.

One day, I retrieved from my mail box a heavy vellum envelope. The return address displayed the imposing name of a powerful New York City law firm. “My book is not even published and I’m already being sued,” I thought, despairingly, to myself. “I can’t take it anymore.”

Hands trembling, I opened the envelope and found a legal contract in want of my signature. The document had been dispatched by attorneys representing Yoko Ono. Overwhelmed by the myriad demands of my project, I’d forgotten that I’d contacted Ono’s office to request permission to reprint, in my book, a poem from her 1964 volume Grapefruit.

Having been charged hefty reprint sums by others, I steeled myself for Ono’s fee. Instead, I was stunned to discover that she’d granted me permission gratis. Her sole requirement? Two autographed hardcover copies of my book.

Shortly after the release of my book (cue “The Long and Winding Road”), I affixed my signature to the title page of two copies and mailed them to Ono. Standing, last month, before the Imagine Peace Tower, I offered a silent prayer in gratitude for her enduring heart.