You are here: Home / Featured / Yet another thing is dying in the ocean: Morning File, Thursday, July 14, 2016

1. Discrimination in the fire department

“Two former Halifax firefighters say they were targeted after they complained about harassment and inappropriate behaviour on the job,” reports Stephanie vanKampen for the CBC:

Paul Service served as a volunteer firefighter for five years in Harrietsfield. But shortly after he began training in 2008, he noticed what he calls disturbing behaviour.

“A generalized behaviour of demeaning female firefighters, that their skills weren’t on par,” says Service.

He says he and three other firefighters met with the station chief to raise their concerns about sexism. Service says they were told not to continue with the complaint.

“It was normalized and it was accepted, and God forbid if you said anything outside of the station,” says Service.

“The fear is real. The thought is real there — if you do formalize this complaint, you’re gonna be done.”

Service says he was criticized by the station chief for bringing up his concerns. Service felt his complaint was being mishandled, and raised the issue with fire department headquarters immediately after meeting with the station chief.

Service was subsequently terminated as a volunteer in a meeting with the station chief. He says he was not given a reason for his termination but eventually was told it was due to a “breach of command.”

As I reported in 2009, the fire department saw repeated incidents of racism against black firefighters. Soon after I wrote that article, I interviewed Liane Tessier about her experiences in the department; Tessier has battled the department for nine years and has recently successfully gotten the human rights commission to investigate.

My sense is that the fire department has come a long way since 2008 — the old boys that constituted department management have been replaced, and there’s at least rhetoric around inclusion and diversity, albeit I don’t know what it’s like for people of colour and women working as firefighters today.

Incidentally, former Deputy Police Chief Chris McNeil (also one of the 16 siblings of now-Premier Stephen McNeil) was heir-apparent to the chief position but suddenly and unexpectedly retired in 2011. I suspect that his retirement was related to an investigation into racism at the fire department. Funny how that all went down the rabbit hole.

The province has issued a Request for Information for “Rural High Speed Internet Solutions,” the first step in awarding $6 million budgeted this year for the program. Forget ferries, this is the single most effective thing government can do to help rural economies. 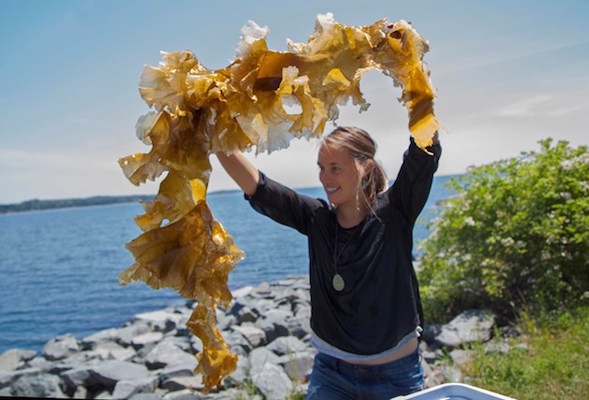 “Decades of warming ocean water has nearly destroyed the ‘luxuriant kelp beds’ off Nova Scotia’s coast, causing a ‘catastrophic’ shift to algae turf that carpets the ocean floor, according to new research out of Dalhousie University,” reports Chris Lambie for Local Xpress:

It shows that mean kelp biomass has declined between 85 and 99 per cent over the past four to six decades.

“We think it’s driven by temperature,” said Karen Filbee-Dexter, a marine ecologist at Dalhousie who worked on the study and used the research Monday to successfully defend her doctoral thesis.

“Most of the kelp beds in our protected warmest bays — so in St. Margarets Bay and Mahone Bay, all those areas that get really warm — are pretty much gone.”

I don’t know why the thesis defence wasn’t in the Dal events listings.

Oh, in a second post, Donham points us to “one cute video courtesy of Halifax Diverse, the Sierra Club, Halifax Water, and (Bousquet-bait warning) TD Green Streets,” because we gotta slap the name of a bank on every damn thing lest we think the world can continue to spin if someone isn’t financing it.

In the video, a bunch of men explain rain to us. There is a lone woman in the vid; she’s silently taking care of children: 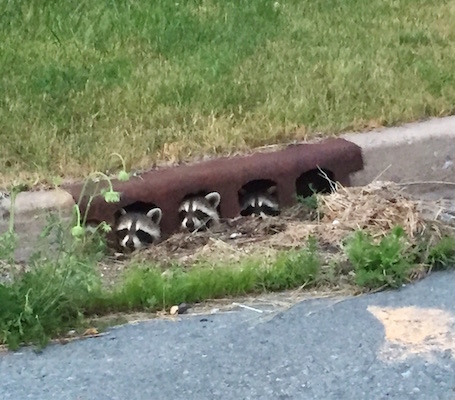 Not much going on at the universities this week. 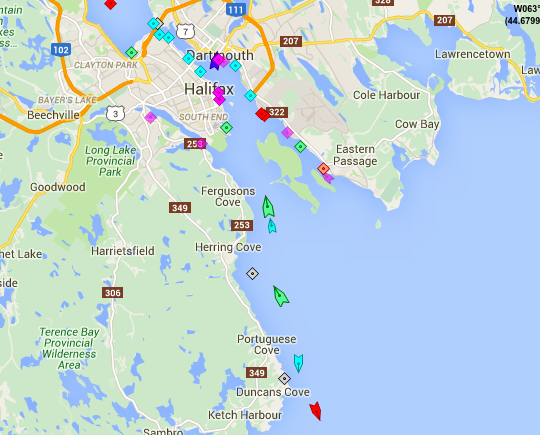 The approach to Halifax Harbour, 8:30am Thursday. The Shawna, followed by the Chebecto Pilot boat, is passing McNabs Island inbound; the bulker Radcliffe R Latimer is not far behind; the naval vessel HMCS St. John’s (blue boat) is outbound, as is the oil tanker Sichem Pandora (red). Map: marinetraffic.com

It’s summer, and there’s not a lot going on. This is a good thing. I could pretend otherwise — local media have given us two days of new articles about a thunderstorm — but when there’s no news, there’s no news.