You are here: Home / Commentary / Yet another November subscription drive ask 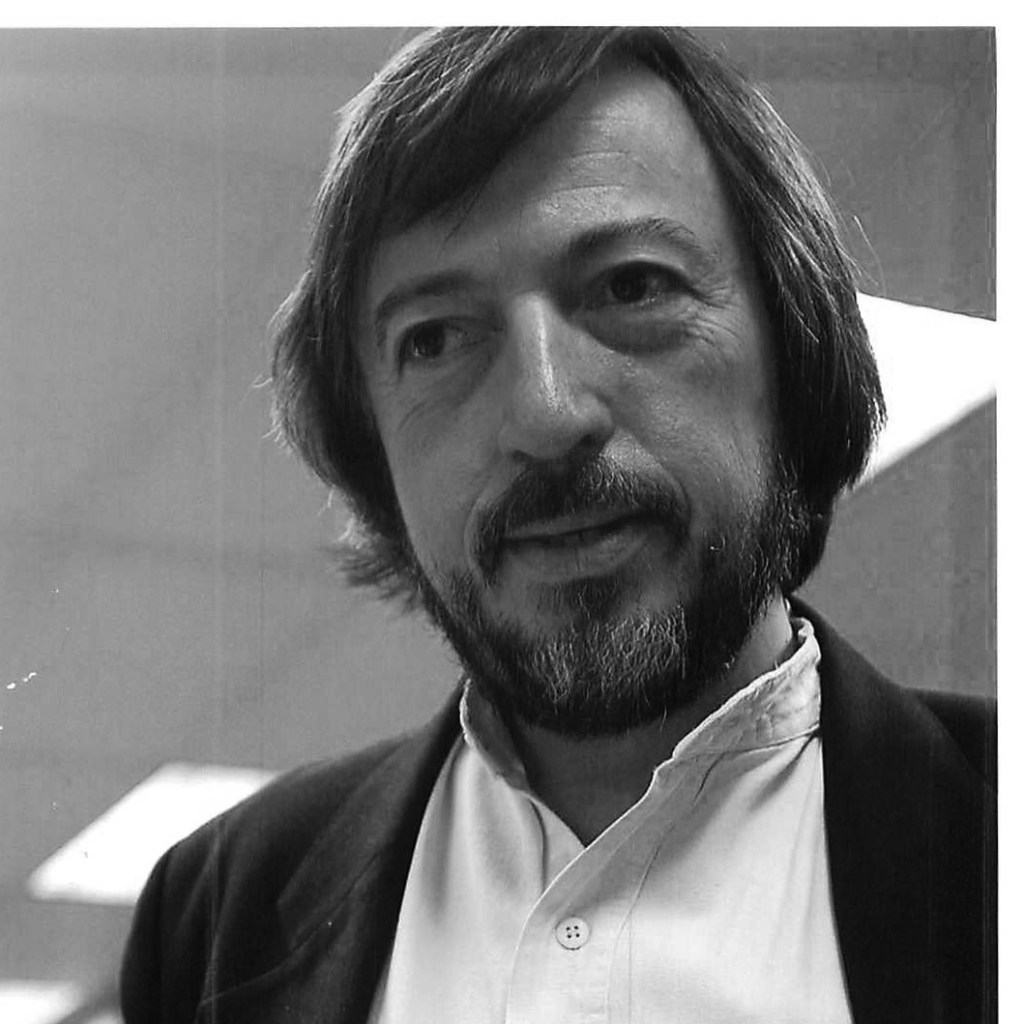 From a time… before.

Stephen Kimber, who has been commenting on the local political scene since the 1970s, began writing a regular weekly column…

It was late October 2016, and I’d just had the coffee and that conversation with my editor at Halifax Metro. Thank you for your service, Philip Croucher said not at all unkindly, but the publisher has decided to go in a different direction.

Since soon after it launched in 2008, I’d been writing a weekly column for Metro, a breezy weekday subway paper for a city without a subway that had risen from the ashes of the late, lamented Halifax Daily News in 2008. (It would itself become toast in 2019.)

The following Monday, Phil said, would be my final column.

It wasn’t the first time I’d had a column-writing gig disappear suddenly, unexpectedly, from beneath my computer keyboard.

As Tim noted in his first November subscription drive bulletin last week, I’ve been writing about Nova Scotia politics in one form or another for one outlet or another for more than 50 years.

I’ve been extremely fortunate over those years, privileged to play small supporting roles in what I think of as the four most significant, satisfying local news ventures of the past five decades: The 4th Estate, The Daily News, The Coast and now The Examiner.

Looking back, it’s possible to see common threads among them.

First and foremost, they were each founded by driven, quirky, passionate, hands-on reporter-editor-publisher visionaries who saw journalistic needs and set out to fill them.

Secondly, thanks to their founders’ passion and commitment, they attracted other passionate, committed journalists who helped to make their visions reality. 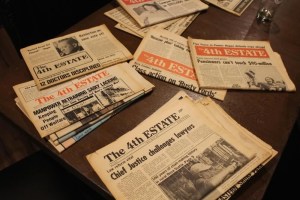 Nick Fillmore, a tenacious former Canadian Press reporter, founded The 4th Estate with his father Frank in 1969. I ended up in their downtown Halifax offices a year later, soon after abandoning my own university studies a few credits shy of a degree. Nick became my demanding post-graduate real-world instructor in local politics and journalism.

At the time, The 4th Estate was just one of a number of feisty alternative Canadian publications — The Mysterious East in New Brunswick, The Last Post in Montreal, the Georgia Strait in Vancouver — spawned by the radical sixties.

But The 4th Estate was probably the most conventionally journalistic of the lot, largely because Nick set out to fill a journalism black hole created by Nova Scotia’s monopoly daily newspaper, The Chronicle-Herald.

In the words of a 1970 federal royal commission that examined the state of the media in Canada:

… there is probably no large Canadian city that is so badly served by its newspapers [as Halifax;] probably no news organization in the country that has managed to achieve such an intimate and uncritical relationship with the local power-structure, or has grown so indifferent to the needs of its readers.

The Dennis newspapers, which are highly profitable, have for years been guilty of uncaring, lazy journalism. This is not merely our opinion. It appears to be shared by a substantial minority of the reading public in Nova Scotia. How else do you explain the remarkable growth of The 4th Estate, a boat-rocking bi-weekly (now a weekly) that has achieved a circulation of 8,000 in less than a year, and a readership estimated at several times that number?

During its eight-year, defy-the-odds existence, The 4th Estate opened a window into a Nova Scotia the Herald missed, or ignored, or pretended didn’t exist. Perhaps not surprisingly, given the state of the local media, Nick also attracted other journalists — many of us working full-time for other outlets — who contributed to the paper because we knew Nick wasn’t afraid to publish truths we couldn’t publish elsewhere.

You can find all the back issues of The 4th Estate, which have now been digitized, at the Nova Scotia Archives. Looking back now, I think the paper didn’t just change journalism in Nova Scotia but Nova Scotia itself and how we saw ourselves. At least it was a start. 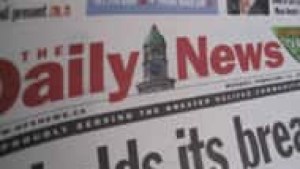 David Bentley, the founder of The Daily News — not to forget both Frank and allnovascotia.com — is another of those driven, irascible journalistic entrepreneurs who deserves — but probably wouldn’t accept — the Order of Canada for his service to journalism and Nova Scotia.

I began writing a column for the News more than a decade after Bentley founded it as a suburban Sackville weekly in the mid-seventies. Over that decade, he had stealthily morphed it into a British-style, take-no-prisoners, Halifax-based tabloid to challenge the Herald’s hegemony.

By the time I became involved, Bentley had sold the paper to a local businessman who knew enough not to mess with journalism. Its new editors, Doug MacKay and Bill Turpin, wisely reined in Bentley’s tabloid excesses but not his unwavering commitment to unafraid journalism. During their tenure, the Daily News attracted some of the era’s smartest young journalists. They uncovered scandal after scandal and ultimately drove Premier John Buchanan from office.

As with most journalistic enterprises, golden eras tend to be brief. The Daily News was sold, and sold again and again, each new awful chain owner making us long for the previous, slightly less awful owner until they collectively drove the paper into the grave.

Meanwhile, The Coast, ostensibly a free arts and entertainment paper, was also busily turning itself into a vital vehicle for journalism in Halifax. It had been founded in 1993 as a summer make-work project by a group of University of King’s College student friends, including Kyle Shaw and Christine Oreskevich. With a lot of sweat and even more self-sacrifice, they more than made their make-work venture work for themselves, their city, and the long haul.

The Coast has been kind to me over the years, crediting me with a much bigger role in its founding than I deserve, but one I am always willing to accept because I’m happy to take more than my share of credit for all that they have accomplished.

Like a lot of advertising-supported media, The Coast has been hard hit by the changing publishing environment and, more recently, by the pandemic’s impact on arts and advertising. But Kyle and Christine have demonstrated their resilience over and over already, and I’m confident they’ll do it all again as we all rebuild and recover one more time. 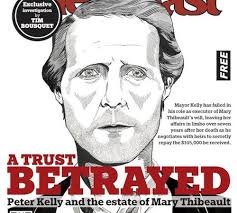 For me, what set The Coast apart from many of its alt-weekly peers across North America has been its consistent commitment to serious journalism. It would have been easy enough for the paper to rest on its earned reputation as the city’s best go-to arts and entertainment lifestyle publication, but its owners willingly invested in long-form reporting too. Some of the feature articles I wrote for The Coast are among the stories I am most proud of.

I wasn’t the only one who got that opportunity, of course. After he became The Coast’s news editor, I read — and became a fan of — the work of Tim Bousquet. He would eventually win a national Michener Award for meritorious public service for a series of exposés that ended Peter Kelly’s reign as mayor of Halifax. (And deserves another for his work at the Examiner to free the wrongly convicted Glen Assoun.)

I wasn’t surprised when I heard sometime in the winter of 2014 that Tim — yet another driven, quirky, passionate, hands-on reporter-editor-publisher visionary with a bit of an irascible streak — was planning to launch his own online publication.

But I was skeptical. An advertising-free, subscription-based local news site at a time when people seemed unwilling to pay real money for real journalism? And adversarial to boot?

Nonetheless, I became a subscriber and, quickly, even more of a fan.

So when Tim messaged me, hours after my final column appeared in Metro, to invite me to bring my column over to the Examiner, I was thrilled. It felt like one more opportunity to be part of a meaningful local news adventure.

My experience at the Examiner has lived up to my hopes in all sorts of sometimes unexpected ways.

When I first began writing for Tim, for example, he asked me to submit my invoices every week. I come from a world in which freelancers submit their invoices monthly if they can and usually get paid only after all the other bills are covered, maybe 60 or 90 days later.

“I always want to know where I stand financially,” Tim explained simply.

So I submitted after each weekly column. And got paid by email transfer hours, sometimes minutes later. After a while, I began to play little games, waiting until late at night to email my invoice, just to see what would happen. Inevitably, Iris the Incredible, the Examiner’s office manager, e-transferred my payment back before I could even turn off the office light. Usually with a cheery message.

That may not seem important to you as a reader, but I think it speaks volumes about the Examiner’s priorities.

Tim has been an excellent steward of your subscription dollars, investing and reinvesting in more and more in-depth journalism.

This is, of course, that pivot moment — the moment when I switch from telling you a story to asking you to make a commitment.

They/we write for the Examiner not only because it provides an opportunity for us to tell stories that matter, in-depth and for an audience keen to know more, but also because — this is Nova Scotia, after all — there are still plenty of important, untold stories that need telling.

You can subscribe here. And/or make a one-time donation here. Nothing to say you can’t do both. And even more than once.