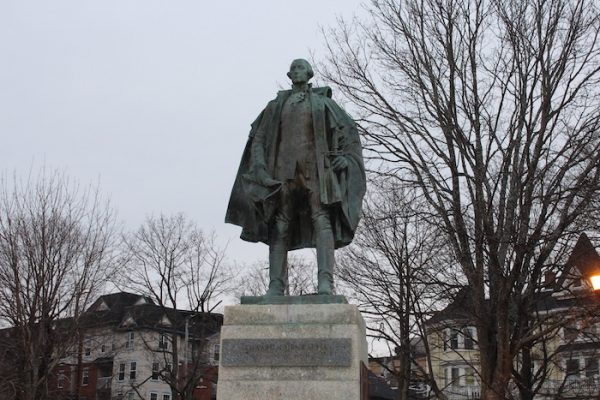 Last week, Halifax City Council voted overwhelmingly to take down the statue of Edward Cornwallis. Columnist Stephen Kimber believed Cornwallis had become too easy a distraction for those of us in the non-Indigenous community. Then he talked with Indigenous journalist Maureen Googoo…

Click here to read “Does Cornwallis matter? More than I would have thought.”

“Mi’kmaq elder Daniel Paul celebrated the removal of the Cornwallis statue by standing on the sculpture’s former pedestal on Sunday,” reports Sonia Koshy for The Signal, the student publication of the King’s College journalism program:

Paul, author of We Were Not the Savages, was the first to talk about the scalp proclamations on the Mi’kmaq in the late 1980s, through news columns and public talks. As part of a rally on Sunday, Paul and a small group of people gathered in Cornwallis Park in Halifax, taking part in traditional singing, speeches and a smudging ceremony.

“I think it’s a sign of progress when you see something like this happen in any city in Canada,” he said. “I hope in the future that this park gets a new name and I would suggest ‘Peace and Friendship Park’ be the name of it.” 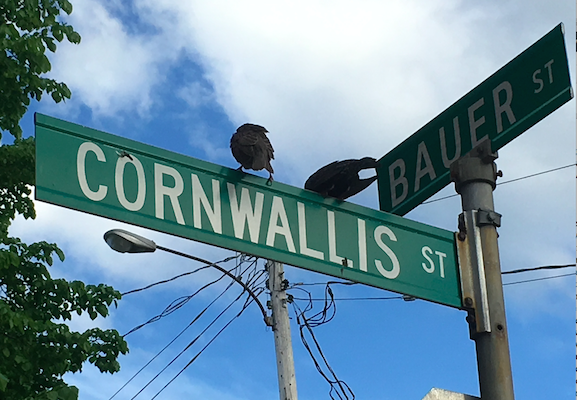 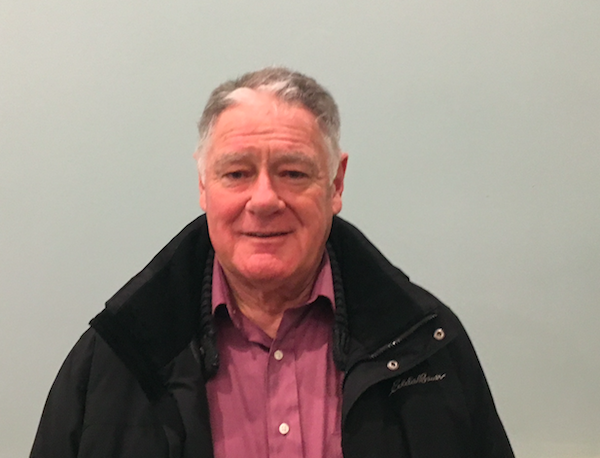 This week, reporter Rick Grant talks about his investigation into the Cape Breton & Central Nova Scotia rail line, and what the deteriorating condition of the tracks means for the proposed Sydney container terminal. 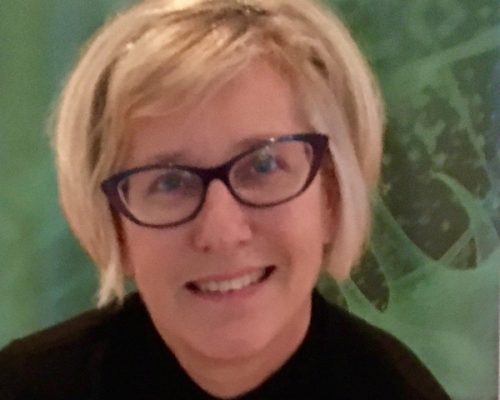 “With Let’s Talk behind us for another year, Jackie Kinley would like to encourage Canadians to keep talking: she also wants to see the conversation broaden to include prevention,” reports Jennifer Henderson for the Halifax Examiner:

“Let’s shift the conversation to a fitness framework and begin to really talk about what constitutes mental health, in addition to mental illness,” says Kinley, a psychiatrist who does research on mental health and Resilience at the QE II Hospital, where she works as the Director of the Mental Health Day Program. “I like to think of the brain as a muscle, just like any other muscle in the body — and suggest we move from talking to action.”

Kinley has tagged the slogan “Let’s Walk” as a way to shift the lens from mental illness toward mental fitness. 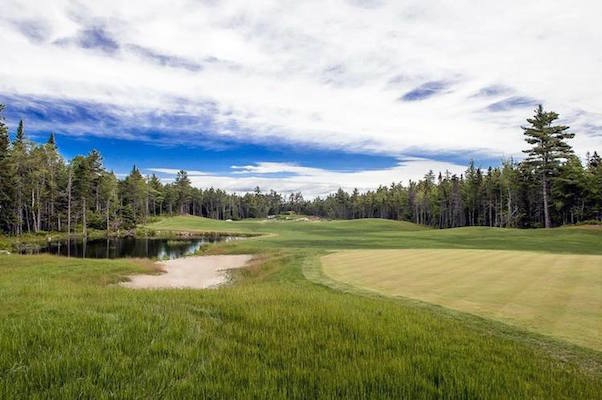 In November, I reported on the ill-fated Aspotogan Ridge development:

Land Investment Group NV, a Belgium investment firm, is suing the three interconnected companies behind the Aspotogan Ridge development for a total of $7,788,580.96. That amount represents a $6 million loan extended on September 29, 2014, plus interest calculated at nine per cent annually, compounded monthly, plus taxes.

Aspotogan Ridge was to be a $100 million, 550-acre “lifestyle community” with a golf course and lots of houses evidently full of the same nice white couples with 2.0 kids and nice grassy lawns found on a Getty stock photo stock image labeled “Smiling family on front lawn of a house.”…

Alas, last year Aspotogan president Barry Publicover complained to one of the unnamed but sympathetic scabs then producing the Chronicle Herald that “Nobody in Nova Scotia is buying lots or building houses, because they don’t want to pay 15 per cent (new home sales) tax opposed to zero tax on existing homes. Everybody’s renovating and builders like myself have absolutely no work.”

Which may be true. But business plan, know your market, blah blah blah.

As for the golf course, this summer Aspotogan announced that the front nine holes are going to open in the May 2018, while the back nine holes would open in time for the 2020 golf season. Given this week’s lawsuit, that seems, er, unlikely.

Sure enough, “a much-delayed golf course near Hubbards, N.S., will be auctioned off Monday after the owners said they couldn’t pay two huge environmental fines,” reports the CBC:

Each was fined $270,278.75. Crown attorney Alex Keaveny prosecuted the case. He told CBC News the companies built the first nine holes in a wooded area with bogs, swamps and streams.

When provincial investigators looked into it in 2014 and 2015, they found wetlands had been infilled with rock, and culverts, pipes and sod had been laid — all without Department of Environment approval.

“The companies were going ahead essentially with building holes and greens from the golf course, despite having not received permission to alter the wetlands that were on their property,” he said.

How many golf courses do we need, anyway?

After checking to see if Donald Trump has nuked someone, one of the first things I do in the morning is check the Nova Scotia tender notices page on the provincial website. Most tenders are posted automatically at midnight, but every now and then the odd tender offer doesn’t get posted until after government offices open, so sometimes I miss them.

That’s what I thought must have happened when this morning I read a Cape Breton Post article by reporter Nancy King about a second cruise ship terminal in Sydney Harbour:

The tender for construction of a second cruise ship berth for Sydney harbour has been published, and it is to be built at the site immediately to the north of the current terminal.

The 483-page document was published on the Nova Scotia government procurement website Friday morning. It had been expected to be posted earlier in the week.

But weirdly, the document was posted on Friday but was back-dated to January 30 — that is, for last Tuesday: 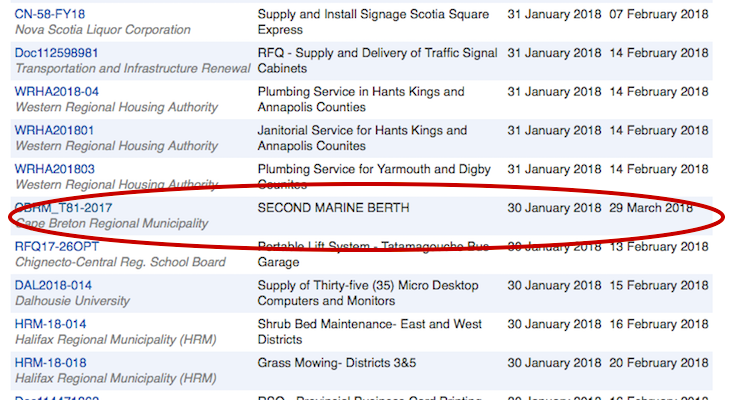 I don’t typically go back and check past dates because, well, I already checked them, and this back-dating put the cruise terminal tender on the second page of the tender site, so I wouldn’t have seen it anyway unless I knew to look for it. What’s with the back-dating? It seems fishy, and (I don’t know this) probably against procurement rules. Date the documents correctly, ya know?

The site referred to in the document as the location for the second berth is land currently owned by North Sydney businessman Jerry Nickerson, the former Sydney Engineering and Dry Dock property. The Cape Breton Regional Municipality (CBRM) has been in negotiations with Nickerson for the land — they have reportedly budgeted $2 million while one report indicated Nickerson wanted $6 million. The CBRM has signalled its intention to proceed with expropriation should it be unable to reach an agreement with Nickerson.

Council has passed a motion to negotiate with Nickerson for the land and to proceed with expropriation if necessary.

A CBRM spokesperson said this week the land issue will be dealt with before the contract is awarded. Deputy Mayor Eldon MacDonald said it’s his understanding the intention is to have the berth in service in spring 2019.

The federal, provincial and municipal governments are equally funding the $20-million project, with the CBRM responsible for any possible cost overruns.

I’d call this a train wreck in the making, except the trains can’t get to Sydney to wreck because of the deteriorating Cape Breton and Central Nova Scotia rail line, so insert your own “disaster is looming” metaphor here.

While building the cruise terminal looks problematic as all get-go, I’d admit that there’s probably a much better case of operating the thing than there is for the proposed container terminal. Cruises are big business, and Sydney wants in on more of the action. Maybe it’ll work… but even there, the supposed economic spinoffs are wildly overstated.

Students, take note! Open your textbooks to Page 1, and let’s read together the example of a horrible analogy:

This is a painful chapter in our history. First Nations have endured hundreds of years of suffering. That needs to be out there, in full view, remembered by all, if we are ever to seek true reconciliation.

The Nazi death camps are an example of a horrific chapter of human history that has been preserved in this manner.

They were not torn down and removed — as a sign of respect for those who were brutalized, dehumanized and murdered.

Instead, they were preserved so that people of future generations could walk in, see that history, smell the horror, feel the ghosts, remember the lost souls and understand what humans can and will do to one another if given the opportunity.

Those camps bear witness to a barbarous history. They make sure we do not forget so we don’t damn ourselves to repeat those acts. I understand the impulse to get rid of painful symbols, but the symbols can also become the way we learn about ourselves and our history.

Who wants to parse this? Susie? Go to the board.

That’s right! Anyone else? OK, Ethyl:

Yes indeed, isn’t it. I would only add, Ethyl, that in the future you should find a chalkboard generator that lets you spell out “fucking” in its entirety.

Otherwise, I think we’ve all seen that our Grade 3 students have more sense than a columnist for the Chronicle Herald. I’m so proud.

Community Services (Tuesday, 10am, One Government Place) — the committee will discuss the Nova Scotia Advisory Council on the Status of Women. 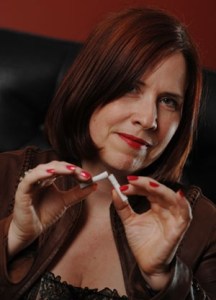 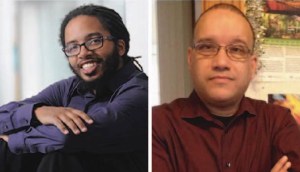 Why Black Unity? Pan-Africanism, Dalhousie, and the World (Monday, 6pm, Room 303, Dalhousie Student Union Building) — Chike Jeffers and Isaac Saney will talk about the history of Pan-Africanism and question its significance for Dalhousie, Nova Scotia, and the world.

THE PIPER, BY COLLEEN MURPHY DIRECTED BY PAMELA HALSTEAD

The town council of Hamelin is a self-absorbed corporate tyranny. It exploits its underclass — rats who dream of becoming human — and it ignores the anguish of its children, who still believe in love. Tensions are already building when change arrives in the form of the mysterious Piper, with whom the Mayor’s daughter falls in love. When the Piper aids the council in their war against the rats, the transformative powers of his magical music will change their world forever. Colleen Murphy’s re-imagining of the tale of the Pied Piper of Hamelin is wildly funny but also stages the anger and sorrow of a society that needs to be reinvented at its core.​ 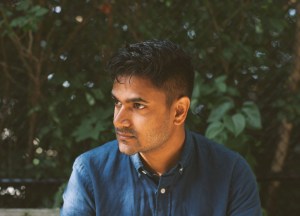 I see my dentist more than I see my confessor.