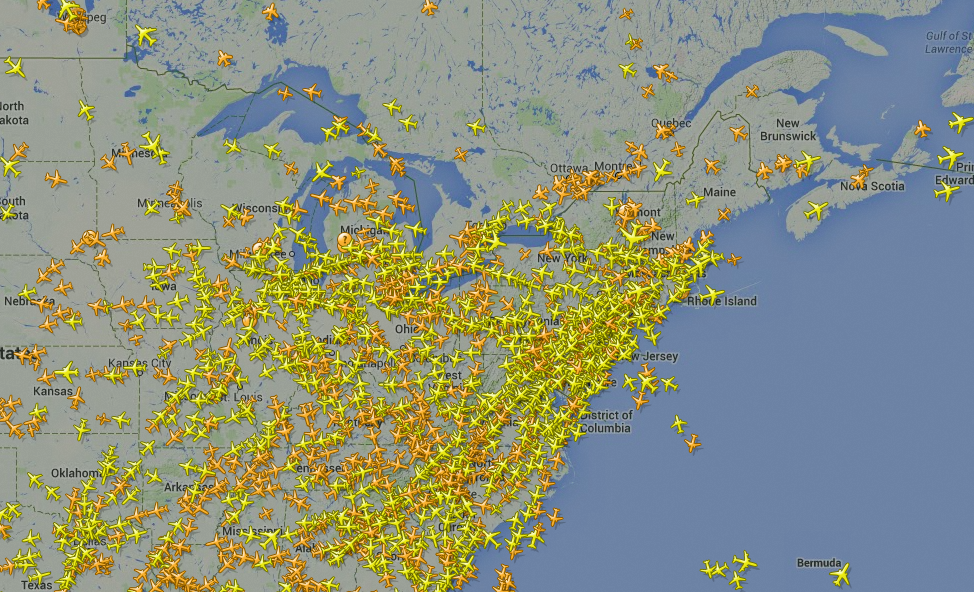 Fredericton’s private Morgentaler Clinic, which provides most of the abortions in New Brunswick, is set to close at the end of the month. The closure comes because the provincial government refuses to fund the clinic, which is representative of the archaic policies around abortion in New Brunswick:

Prior to 1988, the only way women could access legal abortions was if a “Therapeutic Abortion Committee” of three doctors deemed the procedure necessary. When the Supreme Court of Canada struck down those restrictions, they noted that the delay caused by this committee put women at greater risk for physical and psychological harm. The federal government has also since ruled that provinces must provide funding for private clinics performing “medically necessary” services.

Pro-choice advocates say the situation in New Brunswick flies in the face of both these rulings.

According to RJNB, the Morgentaler Clinic was performing more than half of the abortions in New Brunswick, at a cost of $700 to $850, paid out of pocket. Unlike abortions paid for by the New Brunswick government, women do not need the permission of two doctors to go to the clinic, and can simply refer themselves.

Seaforth Energy, a manufacturer of wind turbines in Woodside, has filed bankruptcy protection, reports the CBC. The company owes $4million to 62 creditors, but fully $3 million of that is to government—$2 million to the province, and $1 million to the federal Atlantic Canada Opportunities Agency. It’s interesting to go back and look at what government was saying when it doled the money out to Seaforth. Reads a boilerplate 2012 Innovacorp press release announcing $2 million in financing for the company:

Or not. The company’s twitter feed, which had been fairly active, stopped abruptly on May 7. On its website, Nova Scotia Business, Inc. still lists Seaforth as one of the province’s “world-class companies in wind, tidal and renewable energy.”

But fear not for renewable energy in Nova Scotia! In an embarrassing puff piece, the Globe & Mail today tells us that none other than Chris Huskilson, the CEO of Emera, will be our renewable energy saviour. Emera of course owns Nova Scotia Power, which relies heavily on dirty coal plants for power generation.

The Canada Revenue Agency has found Halifax developer Tony Metlege guilty of tax evasion, for not paying the $110,077 in sales taxes he had charged and collected from tenants of two commercial buildings. The CRA requires Metlege to pay the taxes, plus interest, plus a $82,544 fine, which represents three-quarters of the taxes evaded, within two years.

Given all his holdings, I’m sure Metlege can pay the $82,000-and-change fine without breaking a sweat. I think about that whenever I hear about, say, a woman going to jail for 10 days for shoplifting 160 bucks worth of over-priced plastic crap to give away as Christmas presents.

Update; as initially published, this article had incorrectly associated Joe and Andrew Metlege to Tony Metlege. They are not associated. I apologize to both. Please note also the correction at the end of the CBC article.

About 300 people marched down Spring Garden Road yesterday, protesting the Israeli invasion of Gaza. Reports the Chronicle Herald’s Frances Willick: “Protesters carried signs that read Down With Israeli Colonialism, Stop the Bloodshed in Palestine, Stop Shelling Our Kids and Hands Off Sovereign Palestine. One read When You Need to Have Hundreds of Protests Just to Tell the World that Bombing Children is Not OK, That is When You Know Humanity Has Failed.”

1. The smell of money

Gail Lethbridge looks at the Faustian bargain that is the Northern Pulp Mill: degradation of the environment and health effects in return for money from jobs and taxes.

The “in the harbour” section below ultimately relies on Automatic Identification System data. As of December 2004, explains marinetraffic.com, “the International Maritime Organization (IMO) requires all vessels over 299GT to carry an AIS transponder on board, which transmits their position, speed and course, among some other static information, such as vessel’s name, dimensions and voyage details.” The point is to avoid collisions between ships, help port officials prepare for in-coming vessels, and tell emergency responders if there is dangerous cargo on a ship. The AIS data is in the public domain, and is collected via satellite and made available on many websites, including marinetraffic, and via smart phone apps, etc.

There are similar data sets for airplanes, the primary one called ADS-B, for automatic dependent surveillance-broadcast. There are others, including a five-minute-delayed set for US airlines, but like the shipping data, they are all easily brought together on websites and apps. The app I have on my iPhone is produced by a site called flightradar24.com, which is basically the airplane equivalent of marinetraffic.com. Here’s a screenshot of what is flying near Nova Scotia at around 8:30 this morning: 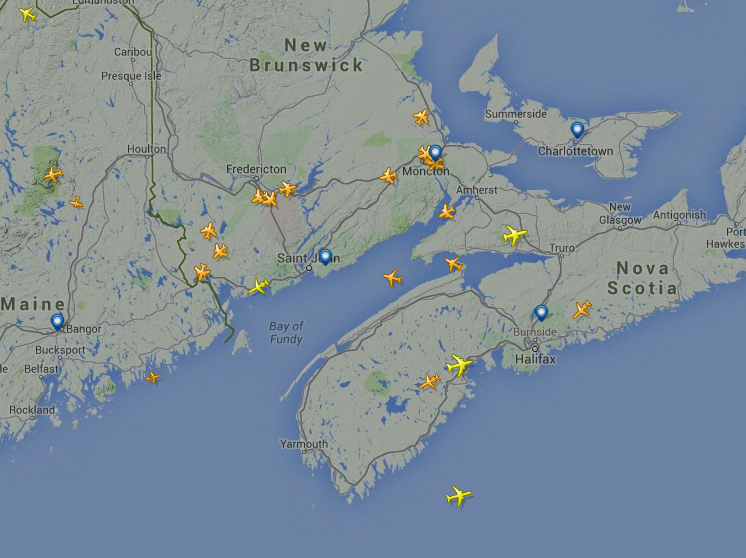 Saturday mornings are a slow time for air traffic; the red-eye trans-Atlantic flights are mostly past us, and there’s not much in the way of business travel. During the mid-day on a work day, this same map sometimes shows hundreds of planes. (And, as you can see from the screenshot at the top of this post, things are considerably busier over the US right now.) In the app, you can click on a plane and get more details. That one on the bottom over the ocean east of Yarmouth, for example, is FedEx flight 38, flying at 35,000 feet from Memphis to Paris. The plane up above Truro is flight LH8225, a Lufthansa cargo plane flying at 35,000 feet en route to Frankfurt, Germany from Dallas, Texas.

I bring this up because Malaysian Airline Flight 17, which was shot down over the eastern Ukraine, was a Boeing 777, and so carried the ADS-B transponder. Any trained military operating a missile system capable of shooting down a plane at 35,000 feet would know to first look for the transponder information, so as to not shoot down a civilian airliner. Clearly, whoever fired the missile that took down  MH17 had no understanding of basic military operating procedure.

I don’t know anything much about the situation in the Ukraine, but I think such horrible loss of innocent life is what we can expect when we spread sophisticated weaponry willy nilly around the world, to people we vaguely understand and have little control over. The Russians do it, the Americans do it, probably the Canadians and the Chinese and the whoever do it as well. It’s nuts.

Go do something fun this weekend.