African Nova Scotian community members in Windsor, Nova Scotia say they are facing harassment after speaking out about Halloween decorations displayed by a local family. 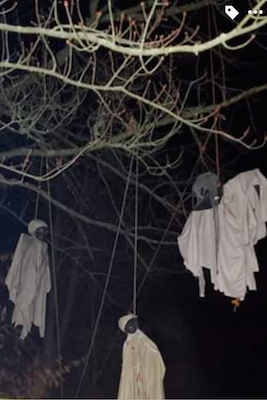 Image of the Halloween decorations at a house in Windsor, NS.

Kevin Upshaw, an African Nova Scotian man born and raised in Windsor, said he was shocked when he first saw the decorations, which appear to depict figures with black faces hanging by their necks from the branches of a tree. For the Black community, the figures evoke images of lynchings.

“I honestly couldn’t believe it at first,” says Upshaw. “I just stood there for a second. I went home and went to bed and tried to let it go, but I couldn’t.”

On Halloween, Upshaw made a post on Facebook about the figures. He says that as soon as he made the post, white people in the community began attacking him. Upshaw says he is disappointed by the response, and that he made the post to try to draw attention to the issue and to express the discomfort members of the Black community feel in the hopes that the figures would be addressed. 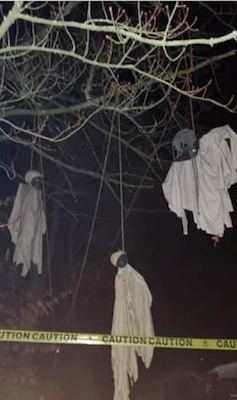 From 1882-1968, according to the NAACP, 4,743 recorded lynchings occurred in the United States. 3,446 of these lynchings were of Black people. While not as common as in the Southern United states, in 1896, a “coloured” man Peter Wheeler was strung up with a slipknot noose and wrongfully executed for the death of a white girl in Bear River, Nova Scotia.

Far from being secretive or hidden events, lynchings were public spectacles, and postcards were created and sold to commemorate and celebrate the events. In the words of Meghan MacRea:

These postcards were made to commemorate events that made many American white people feel proud – of their race, of their superiority, of their civilization and their intelligence. They took photos of their disgusting, cowardly accomplishments and memorialized them for future generations, to be found and collected and remembered by their descendents. On the backs, they wrote to friends and family in sociopathic excitement about the mob they participated in. These postcards capture the mobs witnessing with glee the murder of young men and women, whose most serious crime was the color of their skin. 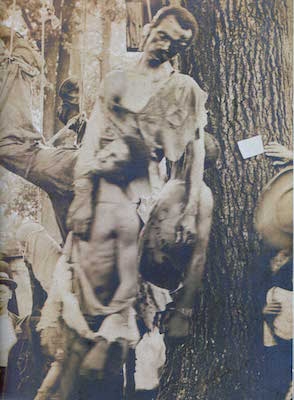 Image of a lynching from a postcard.

Lynching was an act of terror. Far from being an image from the distant past in a distant place, representations of nooses and lynchings are still used to intimidate Black people. Slavery-era symbols are still active, and not only in the American South.

In 2013, white workers at a Leon’s in Halifax symbolically lynched a Black statue in order to intimidate a Black co-worker. In 2016, a noose was left on the door of an African Nova Scotian teacher at a South Shore school.

In 2015, community activist Lynn Jones spoke out after seeing a truck painted with a Confederate flag in Truro, Nova Scotia. Activists who called for the flag to be banned as a hate symbol and who pointed out the flag’s symbolism of slavery similarly faced threats of violence. 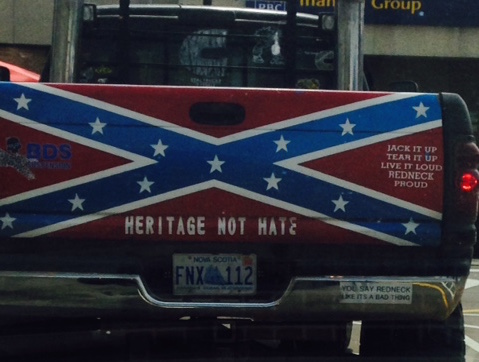 In 2010, an interracial couple near Windsor, Nova Scotia, awoke to find a cross burning outside their home. The incident was prosecuted as a hate crime.

Ever since he saw the decorations and made the post, Upshaw says, “I feel unsafe in my own community. I didn’t feel 100% safe before and now it’s just ridiculous.” Upshaw called the police, but said he was told they couldn’t do anything about the figures since they were on private property. The figures were finally taken down after Halloween.

Although many are defending the figures as harmless and accusing Black community members who object of being over-sensitive, politically correct, or trying to cause trouble, Upshaw says that what most disturbs him is the way the householder responded when approached about the figures:

They hung one up, and it was up for a week. She was approached by an older white male and he told her what it looked like. He said it looked like a lynching. She told me in a message that after that she was angry, so she put two more up. That’s where, to me, it comes in as a real racial act.

If they had taken the first one down when it was brought up it wouldn’t be an issue, but to continue to display them and add to it out of anger, for me, that’s where the problem is.

Upshaw also argues that this incident must be seen in context with histories of racism in Windsor. While people argue that they are simply decorations meant to be scary for Halloween, and that the representation of a lynching was unintentional, the reaction towards Black people who spoke out against the images has revealed racial tensions that have long simmered in the community. 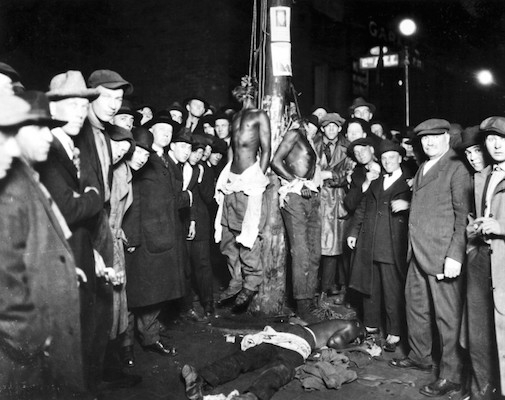 Image of a lynching.

Upshaw says that racism has shaped his experiences growing up in Windsor:

When I was little I didn’t have a nice childhood. I was in a very racist neighbourhood with multiple racist families. We got beat up regularly. We’ve had people call us the n-word. I had a dog sicced on me as a child by a kid’s parents. I’ve been threatened with bats and pieces of wood.

I dealt with racial incidents monthly in junior high school. I’ve been called a dirty n-word. My mom had to go talk to the principal and basically threaten him to deal with it and after all that the student only got a 5-day suspension.

I’ve been dealing with this my whole life, and when I fought back in high school I got put into anger management for defending myself.

I was born and raised in this town and it’s just getting to the point where I can’t handle it anymore. There’s too much weight on me. I can’t take it.

They [the people who hung the decorations] don’t care that it upsets an entire community of people. It’s 2019 and it’s time for something to give and I can’t take no as an answer.

Members of the Black community in Windsor sent me social media posts made in response to challenges to the figures. They are numerous, and they are a difficult read. Many of the posts featured profanity and personal attacks on Black people who spoke out. Black people are accused of being divisive, of bullying the householders and the broader community, and of making a big deal over nothing. Members of the white community in Windsor vigorously defend the figures and see nothing wrong with them. The only problem is Black people’s reaction to them. This response by their neighbours has left the African Nova Scotian community shaken and worried.

Upshaw says he’s not sure how the community in Windsor can move forward from this incident, but that he feels it needs to be addressed. The figures and the reaction to them speak to historic racial issues in the community that need to be taken seriously, he says. Upshaw and other members of the community hope officials from the town will respond and meet with the African Nova Scotian community to seek a resolution.

Community members are also concerned about the lack of police response which they feel has left them vulnerable and open to harassment as they address the issue on their own. The recent case of Nhlanhla Dlamini, who was shot with a nail gun by a white co-worker on a construction site in Pictou County raised questions in the African Nova Scotian community about hate crimes and the ineffectiveness of the justice system in dealing with issues of racial violence and harassment.

From Trudeau wearing blackface, to “redneck pride” events in rural Nova Scotia, to It’s Okay to be White posters glued to university campuses, racially charged representations are frequently dismissed and defended as trivial, jokes, or just for fun. Black people are seen as over-reacting, and racism is imagined not to exist in our communities. Black people, the narrative goes, are inventing reasons to be offended over nothing.

Yet if these things are so trivial, it raises the questions of why they are so vigorously defended when challenged, and why Black people who speak up against them are so frequently threatened, harassed, or met with deep anger. If these figures were indeed innocent, childish decorations intended to be nothing more than ghosts, then why does displaying them matter more than the Black community’s fear of what appear to be lynched Black figures hanging from a tree?

And while the figures have been taken down, the hurt felt by the community lingers on, opening up generational wounds. And that cannot be so easily removed.