I’ve long maintained that improving internet service is a far better use of economic development money than pretty much anything else, and doubly so for rural areas. With more reliable and faster connections, people will start and expand businesses and otherwise be part of the modern world.

I think, however, that such government-financed initiatives should come with some strings attached, including broadening access to underserved communities, providing free connections to libraries, and reducing costs to the consumer. 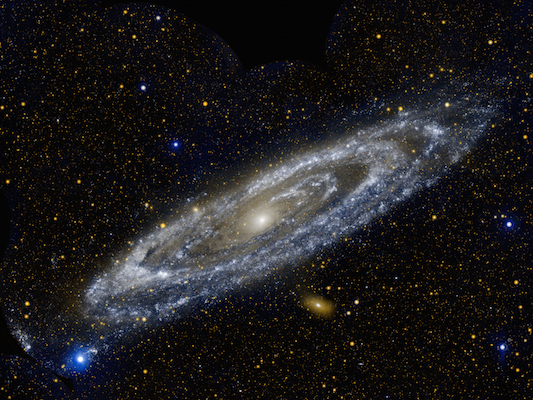 “That means you can interact with the telescope and it talks back,” said Dave Lane, director of the Burke-Gaffney Observatory in an interview Monday.

“For example, you could sent it a tweet, ‘Take a picture of the Andromeda Galaxy’ —  a very close, bright galaxy — and it would reply and say, ‘Yep, I’ll take that picture for you.’ And then the next time it has a clear night, it will take a picture for you and you will get your own personal image.”

After the computer has a list of objects it has been told to observe, Lane said it waits for dark and the skies to clear. It then opens up and starts searching.

“Around Nova Scotia, it gets cloudy fairly often, so if that happens usually the human operators will give up and go home,” Lane said. “The telescope doesn’t give up. It will just sit and wait. “

He said once the telescope, which uses the Twitter handle @smubgobs, captures the image, it will tweet it out.

Great. You think the get-more-followers spam is annoying now, just wait until all the Andromeda galaxy starts tweeting back.

At 4:30 p.m. on February 29th,  police responded to a vehicle/pedestrian collision at the intersection of Duke and Argyle Streets in Halifax.

A vehicle, driven by a 24-year-old woman, was travelling westbound on Duke Street when a 51-year-old woman was crossing in the crosswalk. She was struck by the vehicle and fell to the ground. She was transported to the hospital by EHS with non-life threatening injures. The driver has been issued a summary offense ticket for failing to yield to a pedestrian in a crosswalk.

I don’t know if it’s related, but very often — probably half the times I’ve used the crosswalk, and I use it a lot — the push-button activated crossing lights at this crosswalk don’t work. Drivers who regularly use the street have come to expect that the lights aren’t working, but drivers unfamiliar with the street may not know so. That doesn’t excuse hitting someone, of course. 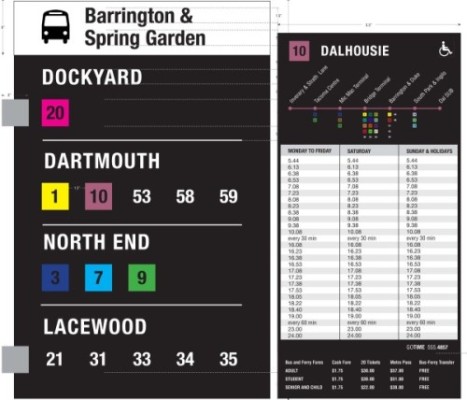 Erica Butler notes that even though there is an award-winning redesign of the old Metro Transit bus stop signs, when Halifax Transit replaces the signs this summer, it’s going with a simple update of the old and inadequate signs. Butler explains that we’re missing a golden opportunity to improve signage and encourage ridership. 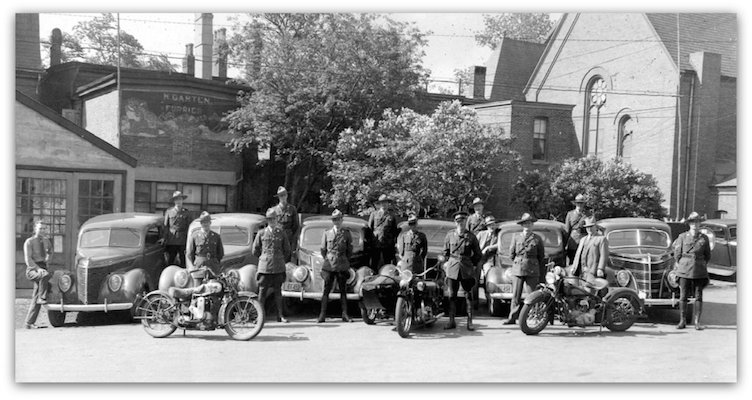 The RCMP found the above photo of the Traffic Services Unit, thinking it was from the 1930s or 40s, but didn’t know where it was taken.

Who do the cops go to when they can’t solve a case? Why, Stephen Archibald, of course. And so a little mystery investigation unfolded on Twitter, which is why we love Twitter so much. 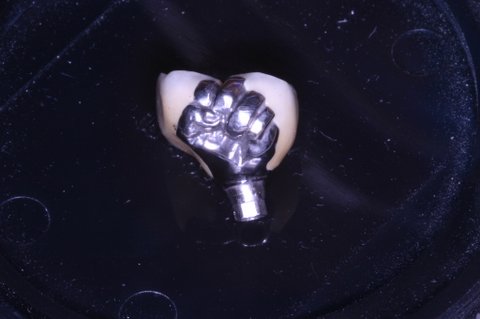 Just read Evelyn White’s story about how she came to have a dental implant with a raised fist etched upon it — the symbol of the Black liberation movement.

Now that DSTN has officially pulled out of the old Trenton Car Works, there seems to be lots of experts who always knew it was the wrong thing. Back in 2010, when the deal was made, I remember a lot of people being very upbeat at the prospect of new good paying jobs after several years of an idle facility after Greenbrier pulled out.

I agree the NDP government pumped in a lot of money to make it happen and the McNeil Liberals were probably right not to lend more money to the current group. My concern is that if we are unwilling to play a part in the future of this facility because it didn’t work this time, then that asset could sit idle for a long time. Many entrepreneurs and businesses have folded for lots of reasons but you have to keep trying or success will never come.

I heard a report where company representatives are quoted as saying that, if nothing else, they did provide some good paying jobs (not as many as hoped) and work for many small businesses in Pictou County. Also, Trenton Mayor Glen MacKinnon is quoted as saying the plant is in good shape with many improvements over the last few years. That money is only lost if we don’t find a new business to make use of those improvements.

I have heard similar things said about the Nova Star ferry in Yarmouth. Yes, they failed, and in the process gobbled over $40 million of our government’s money but they did provide some jobs and helped tourism in Nova Scotia. That asset has sailed across the Atlantic with very few improved assets left behind. Both very similar stories but the McNeil Liberal government is saying the Yarmouth ferry will continue no matter what and no matter how many government dollars if takes. Is it just because one area is Liberal red and the other is all Tory blue? Minister Furey seemed just a little too eager to announce the bad news in an all Tory blue county and to quickly blame it all on a former orange NDP government.

We, the people, must now own the facility in Trenton since we were half owner of the bankrupt company as well as the only secured creditor of that now defunct company. I would hope our provincial government will pull out all the stops (short of giving bundles of free money away) to get that facility back into some type of steel structural business as soon as possible. It would be preferable if it were under local or at least Canadian ownership. Pictou County needs better and deserves better even if the colours don’t line up. We don’t want freebies but we need good paying jobs regardless of how we voted. Leave the free millions of dollars in the government coffers but let’s take the Yarmouth ferry attitude, this facility must be up and running and our government will work tirelessly to make it happen. The payoff will pump more income tax dollars from the good paying jobs into government coffers to help pay for healthcare, roads, schools and the debt left behind by DSTN. 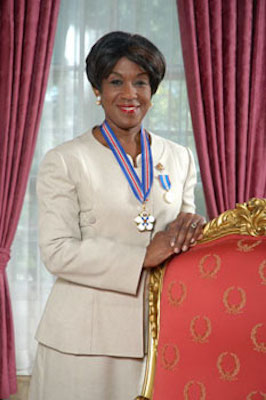 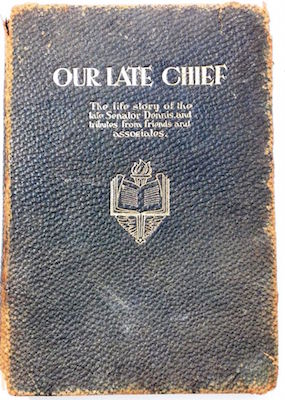 Rosalind Whelan, curator of the Vintage Halifax Facebook page, draws my attention to an Ebay auction of Our Late Chief, a 1920 publication by the staff of the Halifax Herald memorializing William Dennis.

At just 17, William Dennis immigrated to Halifax from Ireland, and got a job as a reporter for the Herald, worked his way up to news editor, and then bought a controlling interest in the paper and became editor in chief and president of the morning Herald and afternoon Mail Star. Dennis was appointed to the Senate in 1912. In 1900, William Dennis passed operations of the paper on to his nephew, William Henry Dennis, who ran the paper until his death in 1954, when it passed onto William Henry’s 26-year-old son, Graham Dennis. Graham Dennis ran the paper until about 2007 (he died in 2011), when publishing duties passed to his daughter, Sarah Dennis. Sarah Dennis has left operations of the paper to her husband, Mark Lever. 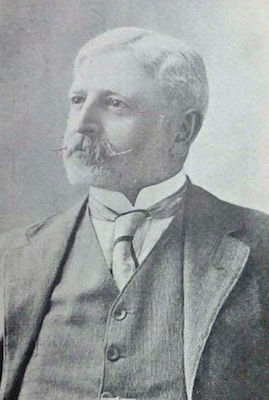 To my ears, Our Late Chief is embarrassingly boosteristic — it’s of a period when towns and cities jostled with each other for the banner of superiority. Then again, Halifax really hasn’t left that stage, and much the same attitude is expressed today in the pages of the Chronicle Herald by Mark Lever. From Our Late Chief:

When young William Dennis first arrived in Halifax, the city was sound asleep. It was the historic “Garrison City by the Sea.” How we all loved that quaint old Halifax of yesteryear, with its red coats, and its gallant flavor of military England, whose days were ever fading with martial swan-songs of citadel and barracks. Past times had seen at Halifax a thriving port, a-hum with commercial endeavor. But the passing of the white-winged clippers left naught but soldiers and sweethearts, while dust-covered counting-rooms languished in memories of business departed. Into this sommolescent Garrison City came William Dennis, a youth whose eye of vision caught from the city’s Past a promise of her future.

In season and out of season he began the cry — “Wake Up Halifax!” Thus it was given to him to be the prophet of a new era. But William Dennis was no romancer, standing in the clouds. He was rather a practical mystic who, while dreaming, managed to keep his feet upon the common pavement. No matter how far soaring his dream it always was linked with the task next at hand and in the present. Hence his air-castles of to-day were ever becoming facts, real and concrete, tomorrow.

Others might knock Halifax; pooh-pooh his optimism; or exclaim indifferently, “Let well enough alone.” But undismayed he held that vision of the city, awakened and transformed into a bustling, booming Empire Port.

Year in and year out the presses of The Herald worked tirelessly and ceaselessly, spreading the gospel of our grander Future.

But where William Dennis differed from Lever is in their philosophies towards newspapering. Our Late Chief opens with a quote from Dennis:

It is my wish that The Halifax Herald and The Evening Mail shall be conducted as public utilities for All The People, and absolutely independent and fearless, offering no unkind or unjust criticism, treating opponents fairly on all questions, giving vigorous and hearty support to movements for the public good.

Later in the publication, in a section headlined “The Friend of The Men,” the mechanical staff at the paper praised Dennis:

During the past few years, the deceased [William Dennis] had done a great deal to improve the conditions of the workmen, being the first to raise wages above the rate of other offices and making it retroactive for some months. Last Christmas he gave every person in his employ an insurance policy for $1,000 or more free of cost. Only a few days before his death he offered every man in the mechanical department a day’s pay or one day off a month to everyone who had a clean… [cut off]

Three generations later, the owners of the Herald are demanding pay and benefit cuts from their employees.

By the way, that job fair at the Marriott today ought to be a hoot. 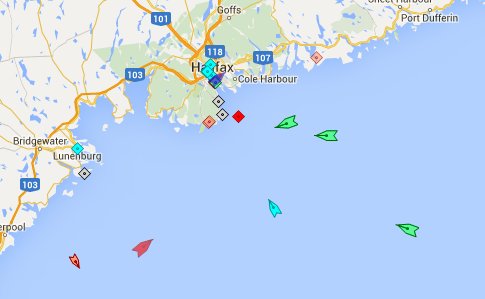 The approach to Halifax, 8:30am Tuesday. Starting with the top green ship, in clockwise order the ships are Oceanex Sanderling, Tiger, CSCL America, Breaux Tide (blue), and Afra Oak (red).

Just a reminder that last year on March 17, we got a foot and a half of snow.