You are here: Home / Featured / Who’s hiring during COVID-19?

I (Suzanne Rent) haven’t done a list of terrible-paying jobs in some time. But on the weekend when Tim Bousquet shared a tweet from Stanfield’s saying they were hiring more staff to help them make medical gowns, I thought I’d look into what companies are still hiring during the COVID-19 crisis (Jennifer Henderson reported on Stanfield’s plan to hire more staff. You can read that here).

Grocery stores are one of the essential services hiring quite a few new employees. Loblaw spokesperson Mark Boudreau says the company received 600 applications for jobs at its 30 Superstore locations in Nova Scotia, including the 15 stores in the HRM. More applications are still coming in. So far, the company has hired 350 people to fill in a number of jobs, including those helping with online delivery. Boudreau says the typical daily delivery has doubled in recent weeks.

In March, Loblaw announced it was increasing its staff’s wages by $2/hour.

Sobeys didn’t respond to my request by publication time, but the company shared several postings listed on Indeed.com over the last several days, including a posting on Tuesday.

In March, Sobeys introduced a “hero pay” program that gives employees an extra $50 per week. Staff who work more than 20 hours a week will receive an extra $2/hour for every hour over that line.

Walmart also increased the pay for its full-time and part-time employees. Those workers also received a March “appreciation bonus” of $200 for full-time workers and $100 for part-time staff. No word from Walmart on how many additional staff have been hired because of COVID-19.

I found this ad from Shadow Security (on Indeed) advertising for security guard jobs in Amherst specifically for the COVID-19 crisis. The few times I’ve been out to get groceries, I’ve seen security guards at the store entrances.

Nate Martin, director of operations with Shadow Security, says that ad is out of date.

The majority of us in management have been working 60 to 70 hours weekly since the State of Emergency was announced, to ensure we are properly supporting our clients, staff and the communities that rely on those services, needs. With that, we have a small list of house keeping to update, when we have some “down time” including our ads.

The ad says the wages are $13/hour to $14/hour but Martin says wages are discussed during the interviews, which will soon be taking place online via Zoom or Skype.

Martin wouldn’t say who Shadow’s clients are, but said they are essential services. Martin adds that they have safety measures in place at the company.

We are constantly reviewing risks and conditions to ensure our staff are as prepared as possible to be on site safely. It’s hard to take care of others if we aren’t taken care of ourselves. For example, I have turned down requests that we have deemed to be not a safe environment for my staff, and no I will not comment on who.

Paladin Security also has a posting for security guards.

Gillian Costello, a spokesperson with Shannex, which owns and operates retirement and long-term care homes, says there is “broad recruitment” happening at the company for a number of roles. On Indeed, there are a couple of postings for casual staff. The ad mentions the company is prepping for staff shortages during COVID-19.

Three employees at Shannex, including two at Nova Scotia facilities, have tested positive for COVID-19. The third employee works at a private retirement home in Quispamsis, N.B.

Northwood also has postings on Indeed, including one for casual staff for its “pandemic relief team.”

I emailed Northwood, but haven’t heard back. Two staff and two residents at Northwood in Halifax have tested positive for COVID-19.

Michele Lowe, managing director at the Nursing Homes of Nova Scotia Association (NHNSA), says there has been increased hiring at nursing homes across the province. She says the association doesn’t have exact figures of how many people have been hired because the number changes daily, but the roles being filled include those for RNs, LPNs, CCAs and support staff.

Many of [the nursing homes] have had great success with retired staff offering to come back to work for a temporary period of time. Casual staff have also made themselves more available and workers in other industries such as hospitality and tourism are coming forward to work in temporary support roles that are not focused on direct care.

Canada Post has listings for several job openings across Nova Scotia. Those are here.

Spokesperson Valérie Chartrand says Canada Post still has the staff to continue deliveries, but added, “we are continuously adapting our operations so that we can help slow the spread of this virus in our communities, while maintaining the services Canadians rely on.”

I also reached out to UPS, but didn’t hear back by publication time.

Spokesperson Carla Adams says the authority has hired 57 external candidates since March 20. Adams says the human resources department couldn’t say if those workers were previously employed by the NSHA (that is, are they retired or resigned staff) or if they were students. The department did say, it’s “probably safe to say” the new hires were all contributing to the authority’s COVID-19 efforts.

Economic and Development Canada has a listing for program service officers, likely to process the CERB and EI claims.

A spokesperson with ECC didn’t message back about exact numbers by publication time.

In the Indeed search engine, I typed in COVID-19 as a keyword for a Nova Scotia search and it was interesting to see how a number of employers are still hiring, but are allowing employees to work remotely during the crisis. Some of the jobs include a graphic designer gig with Jane’s Next Door, call centre workers, and English language teachers.

It would be interesting to see how that trend continues after the crisis is over. 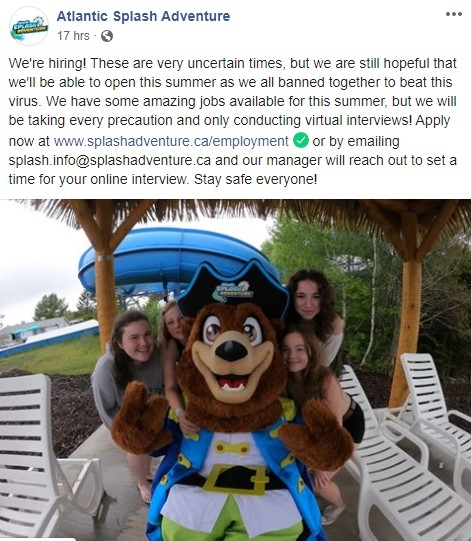 Many of the seasonal operations may be opening next month and I wondered about their hiring processes right now. Yesterday, Atlantic Splash Adventure in Lucasville posted a hiring notice on its Facebook page.

The following is written Jennifer Henderson.

JD Irving Ltd has recalled workers to Sproule Lumber in Valley, Nova Scotia, north of Truro. The mill employs about 140 people and is one of two sawmills still operating in the province since Northern Pulp closed at the end of January and the COVID-19 virus struck in March. The mill re-opened Monday night, April 6, after being shut down for several days since April 1. On that date, April 1, tests for two employees came back positive. A second round of cleaning and disinfection by an outside contractor was carried out and an infrared machine to take workers’ temperature is being installed.

The first of three employees at Sproule Lumber to test positive for the virus was reported on Saturday, March 28. 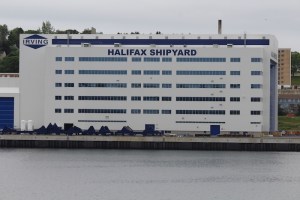 Meanwhile, about 1,100 unionized tradespeople at the Irving Shipyard and two related companies in Dartmouth are waiting to hear if they will be called back to work. They’ve been at home two-and-half-weeks after concerns were expressed on social media about whether they were being put at risk by working in close quarters without adequate distancing measures. A recall decision by company managers is expected soon. Last week, a small number of unionized employees returned, according to Tom Ormsby, communications director for Irving Shipbuilding.

“We were able to recall 15 of our unionized colleagues to assist with preparations for a successful restart when that time comes,” emailed Ormsby. “These personnel worked principally to receive and order material in roles that can be carried out while meeting health authority guidelines. We will continue to evaluate the recall of selective personnel whose efforts can enhance a successful restart and can be accomplished while meeting health authority guidelines.”

About 700 other Irving Shipbuilding employees have continued to work during the pandemic. After several earlier extensions, the first of six Arctic Offshore Patrol vessels being built in Nova Scotia was supposed to be delivered to the Navy at the end of March. That date has been waived due to COVID-19.