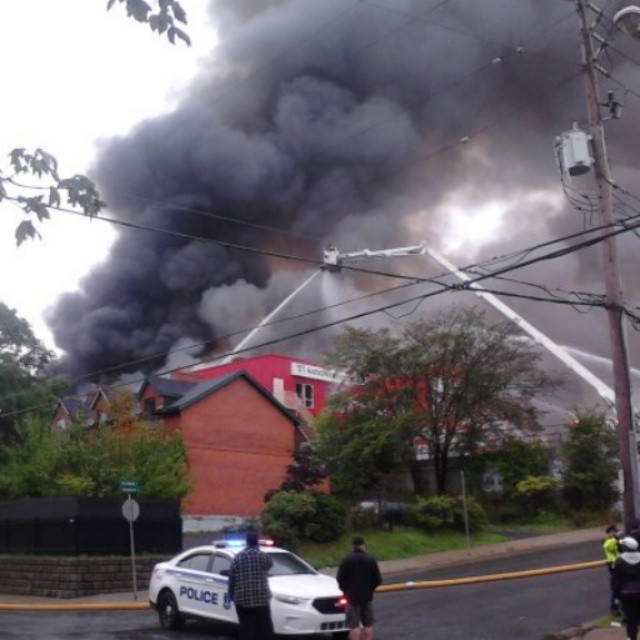 Christine Davison, who lives next door in the 12 Apostles on Brunswick Street (you’ll know her as the woman in the fence dispute with the city), took to Facebook to relate her past concerns about the building:

I complained SO many times to the city, to the fire department, to Environmental Health, Heritage Gas and to the Metledges who own the building that their stack was too close to the roof and that you could see sparks coming from it—There’s going to be a fire sometime, I said…Grrr.

Well, they [government officials] TRIED to. But there was nothing in any legislation allowing them to do anything about it. The most I got was Heritage Gas saying they’d pass along the message to The Metledges that I felt they should raise the height of their stack for safety reasons. I kept being passed around from agency to agency, many of which came out to actually inspect their stacks and said “no, they’re fine”….

The Lunenburg Community Consignment shop, which donates 10 percent of sales to community groups, is facing closure because building owner Scott Sherman may not spend the $20,000 required for a handicap accessible ramp, reports the Chronicle Herald’s Beverley Ware.

Before the paper even hit the streets, accessibility advocate Gus Reed had written a letter to the editor, which he cc’ed to me:

As a former Lunenburg homeowner and wheelchair user, I fear your article will cause the real cost of this dispute to come to rest at the door of disabled Nova Scotians, who get nary a mention from you. A couple of things come to mind:
Sherman’s a guy who won’t do for Nova Scotians what he is required by law to do at home. Let’s be clear about who gets harmed if there’s no ramp.
Gus Reed

As I reported last month, Victor Syperek has been musing about moving the Seahorse Tavern from its Argyle Street home to the former Hell’s Kitchen space below The Marquee. This weekend, he confirmed the move.

An ATV hit some sort of animal, maybe a calf, maybe a cow, on a trail in the Annapolis Valley.

the lack of further public consultation and the off-handed, report-to-council, non-way in which the news was not delivered to the public, who had taken the time to consult, does not speak well to Halifax Transit’s commitment to the process, or to its rebranding promise to “be bold.”

Architecture lecture (7pm, Auditorium, Medjuck Architecture Building)—Talia Dorsey, an architect at The Commons, Inc. in Montreal, will give a talk titled “Design Strategy #4: Modernization through Preservation.”

“I can’t draw,” Tempa Hull tells me, but she “messes around” with making a comic she calls Dicky and Thicky, based partly on her experience with a food bank in the States. Hull has a quirky and biting humour, as this example shows (Click here for a larger version): 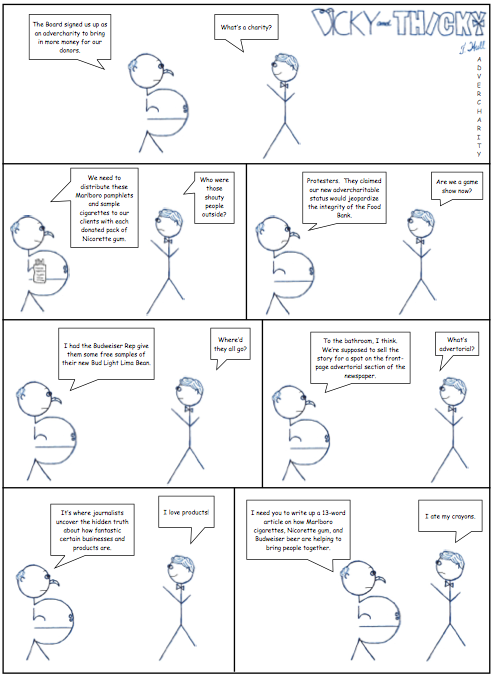 I think the word “advercharity” is genius. Pure genius. I’m stealing it, and I’m going to use it repeatedly.

I’m so old I remember when corporate names weren’t attached to everything. I’ve gone on and on about the evils of selling naming rights to public facilities to corporations, but selling naming rights to charitable events is even more insidious. Giving to charity used to be a private affair, something one did quietly, with discretion, so as to not bring too much attention to oneself. People in the community would celebrate philanthropists, but the philanthropists would accept the honours grudgingly, modestly, and with discomfort. Sure, that modesty was a sort of public ritual, but it served an important social function: giving to charity is simply what one with the means to do so does. Now, people brag about their own charitable giving on social media. It’s unseemly. It’s worst still when there’s a company logo attached.

“But if it brings more money to (your favourite worthy cause here) it’s worth it!” scream 10,000 readers in unison.

No, it’s not, and here’s why. We have drastically cut tax rates on corporations and the uber wealthy over the last few decades—the top marginal income tax rates in most of the western world were over 90 percent in 1950s and 60s (I think that the high taxes on the wealthy were in large part responsible for the high rates of economic growth in those decades, but that’s an argument for another day), and now they’re a third that. Corporate taxes have also been slashed, and incredibly irresponsible people argue for eliminating them altogether. As a result, government is underfunded, and worthy social projects must be funded through charity, which in turn are funded by… corporations, with their names attached.

Attaching a corporate name to a public building or a charity isn’t just advertising for that corporation. It additionally completely buys into the neoliberal social and economic order, to the exclusion of all else. Ordering the world around maximum short-term profit for rich people has many, many horrible effects: on the environment, on workers, and on the natural good will that people otherwise bestow on each other. When all human interactions, even charity, are commodified, humanity itself loses.

I’ve finished Graham Steele’s book and hope to have something to say about it later today.