You are here: Home / Commentary / What would Andrew do? Jagmeet? 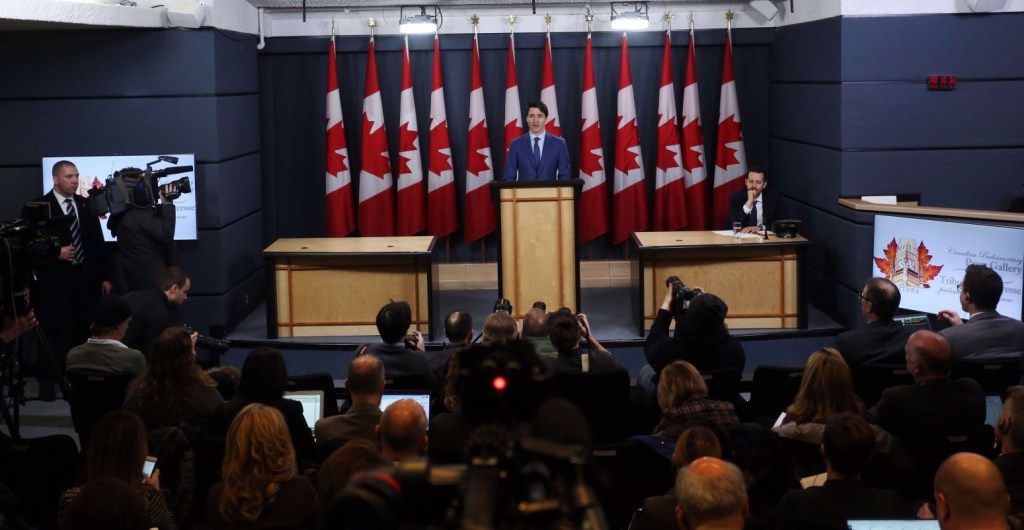 There is an unanswered, barely whispered question at the heart-attack centre of the SNC-Lavalin scandal now dumping buckets of freezing rain on Justin Trudeau’s sunny ways/sunny days parade.

And that question is this: what would Andrew Scheer or Jagmeet Singh have done differently?

In our system of government, opposition parties are expected to oppose, not propose, at least until there is an actual election, during which they can lay down their own we-would-do-things-differently campaign platforms.

But here’s the problem with that. Politicians lie to get elected. I could offer you chapter and encyclopedia about that based only on our recent experience here in Stephen McNeil’s Nova Scotia Funhouse of Electoral Mirrors — remember that family doctor for every family, those real enforcement powers for the privacy commission, etc., etc. ad nauseum — but let’s stick for the moment with Justin Trudeau, the SNC-Lavalin scandal currently roiling Ottawa and its own inciting lie.

That scandal has its unlikely beginnings buried deep inside a 556-page door-stopper of scattershot legislation the Liberals introduced last year. Officially known as the Budget Implementation Act, it wasn’t. Instead, it was a Trojan horse. The Liberals stuffed every conceivable piece of legislation about which they didn’t welcome real debate into their one-vote behemoth boll.

That legislation included, of course, the what-does-this-have-to-do-with-the-budget amendments to the Criminal Code designed to allow companies accused of corruption to cop deals, known as “remediation agreements,” to avoid criminal prosecution. For “companies,” read SNC-Lavalin, the real authors of this piece of legislation within the legislation.

Such bills are known in the politics trade as omnibus bills.

Wait a minute. Didn’t Justin Trudeau rail against omnibus bills? Of course he did. As the National Post reminded us last month, then-Opposition leader Trudeau forcefully declared back in 2013: “I wouldn’t use [omnibus bills], period.”

As if to underscore his principled stand, the Liberals’ 2015 election platform was explicit: “Stephen Harper has also used omnibus bills to prevent Parliament from properly reviewing and debating his proposals. We will … bring an end to this undemocratic practice.”

One of the many problems with adopting the Harper regime’s “undemocratic practice,” however, was that basic questions about the Criminal Code changes — for example, why was the government writing legislation to benefit corrupt Canadian companies? — were never answered in the all-over-the-map debate on the omnibus.

While a Liberal MP on the Finance Committee did timorously raise the fairness question and Conservative and NDP MPs half-heartedly demanded the government split the bills so each part could be more carefully debated, nothing came of it.

The Liberals got their here-you-go-SNC-Lavalin Criminal Code amendments, and the opposition parties were never forced to put themselves on record stating explicitly their own position on the legislation.

Especially now that they are able to sound so shocked and appalled — “Resign! Resign!” — after the government’s ham-handed attempts to convince Attorney General Jody Wilson-Raybould to actually use the legislation they’d so carefully crafted and passed specifically for this circumstance.

But that brings us back to the question: what would the Tories and NDP actually have done differently? Would they have refused to bow to SNC’s intense lobbying and simply not introduced such legislation in the first place? With the legislation in place, would they have chosen the door marked “Prosecutorial Independence” or the one with the flashing neon sign: “Jobs?”

While there are legitimate questions about the government’s unsourced, apocalyptic predictions of 9,000 job losses if SNC-Lavalin is convicted of its many and nefarious corrupt practices in court, there is no doubt it is a significant employer in Quebec and beyond and, as the Toronto Star’s Chantal Hébert put it last week, “any responsible federal government would have taken the time to carefully weigh the option of mitigating the possible damage to the firm’s future following a criminal conviction.”

Which brings us back — again — to the question: What would Andrew Sheer or Jagmeet Singh really do that was different from the unpleasant path Justin Trudeau chose? Hébert herself offers a hint: “It is no accident that in their French-language interviews, Conservative and New Democrat MPs from Quebec have been at pains to stress that their parties are not on a vendetta against SNC-Lavalin.”

And so it goes.

With a federal election barreling down upon us, we are left with mostly unpalatable choices on this issue.

None of the above?