You are here: Home / Featured / What John Prine teaches us about living through these difficult times

In a letter submitted to the courts, John Scoville, the Director of Correctional Services, outlines protective measures taken to avoid a outbreak of COVID-19, and then ends with the suggestion that being in jail is safer than being in the broader community during the pandemic:

With the unprecedented reduction of the inmate population and the screening and preventative measures we have put in place to mitigate risk, our performance can be compared favourable [sic] to increasing cases in the public domain.

There is no evidence for this claim.

Click here to read “Nova Scotia’s Director of Correctional Services suggests that being in jail is safer than being in the broader community. That’s just false.”

I’ve created a series of charts to track the course of the pandemic in Nova Scotia, and the response to it. I’ll update every day. Here are the most recent charts:

Total number of people tested for COVID-19 in Nova Scotia by date:

I’m part of the daily virtual briefing every day, which usually starts at 3pm, and I report on it as soon as I can afterwards.

On Friday, Premier Stephen McNeil announced a “rent deferral” plan for small business owners, in which the province would guarantee up to $5,000/month to the landlord. I called McNeil out in Friday’s daily update.

Over the weekend, a group of small business owners penned and distributed an open letter to the premier:

The rent deferral policy introduced on Friday is intended to help small business. Deferring rent payments while small businesses are closed because of covid-19 coupled with a guarantee to landlords in the event the small business fails and cannot pay — protects the landlord and in turn the banks from the lost revenue during closure. But it leaves the little guy — small business — holding the bag without matching revenue to pay the missing rent.

As of Sunday evening, 133 small business owners have signed onto the letter.

You can read the letter here.

The letter was started by members of this closed Facebook group. I don’t know how tightly closed it is. 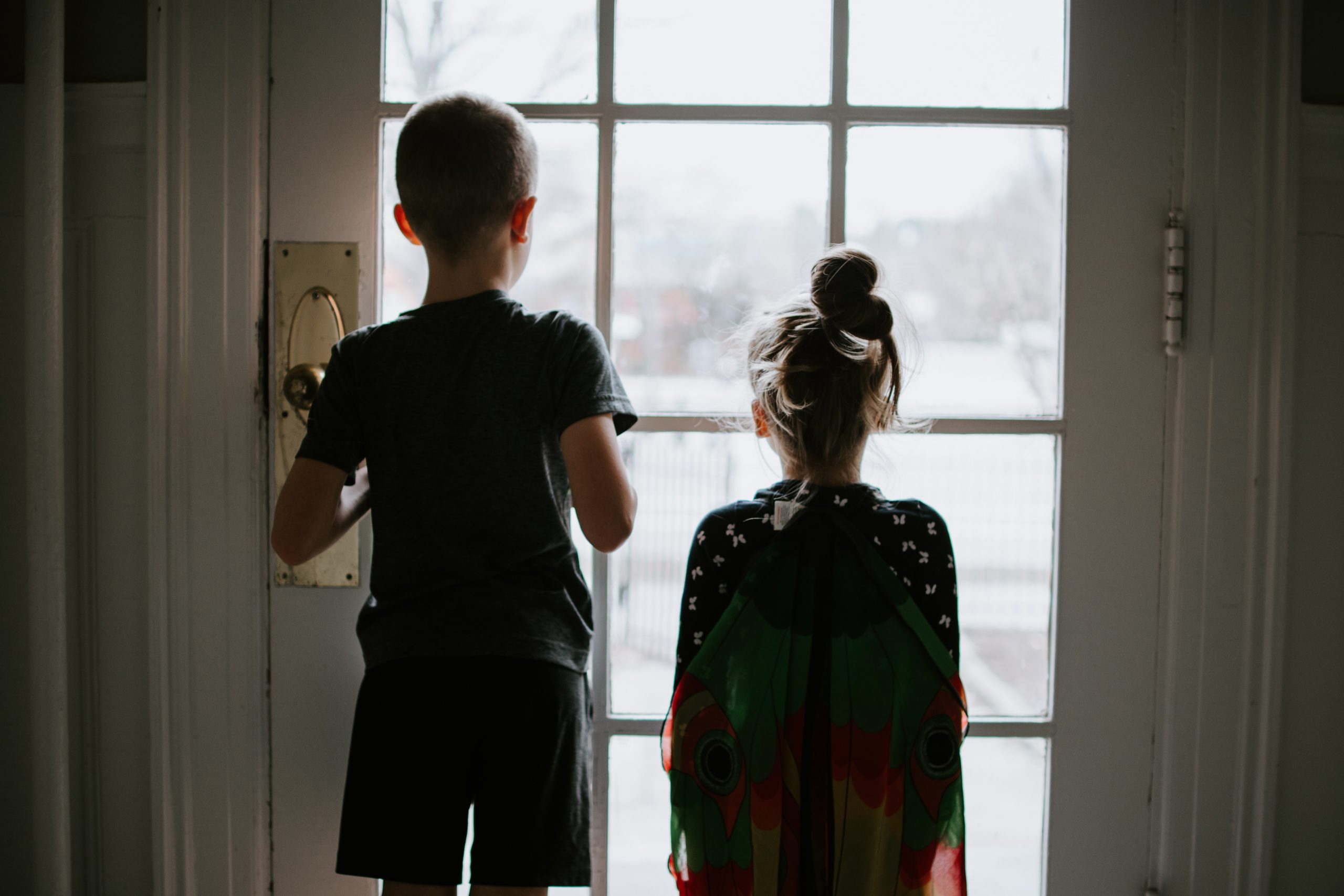 A crisis like COVID-19 means an increase in domestic violence. Supports like shelters are still open for women needing to flee violent situations and there’s still a duty to report those cases in which a child is being abused or neglected. But communities can still support women and children, even while practicing social isolation. Photo: Kelly Sikkema/ Unsplash.

“Staying home is keeping many of us safe from Covid-19, but it’s also increasing the risk of violence against women and children who are now at home more often with abusers,” reports Suzanne Rent:

Still, there are ways to keep women and children safe and connected, even as most of us stay at home.

Click here to read “Rates of domestic, family violence increase in a crisis like Covid-19. But people and communities can still support those at risk.” 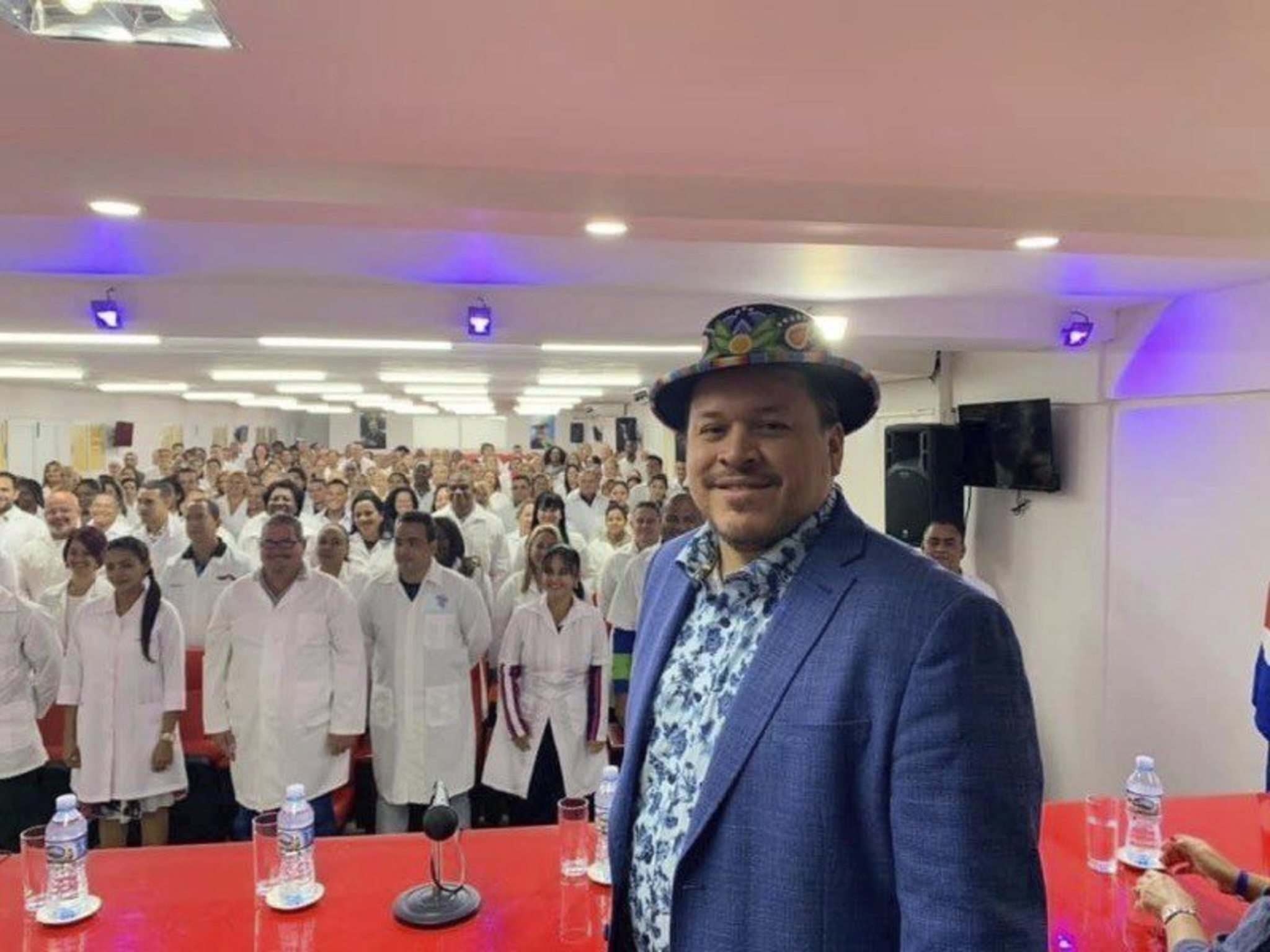 Grand Chief Jerry Daniels of the Southern Chiefs’ Organization poses for a photo on Friday, February 28, 2020 with Cuban doctors who are in training for international deployments in Havana, Cuba. The SCO is trying to accept Cuba’s offer for doctors to work on Manitoba reserves. Photo submitted.

Manitoba’s First Nations reached out to Cuba even before COVID-19 because they need healthcare help. So do we. 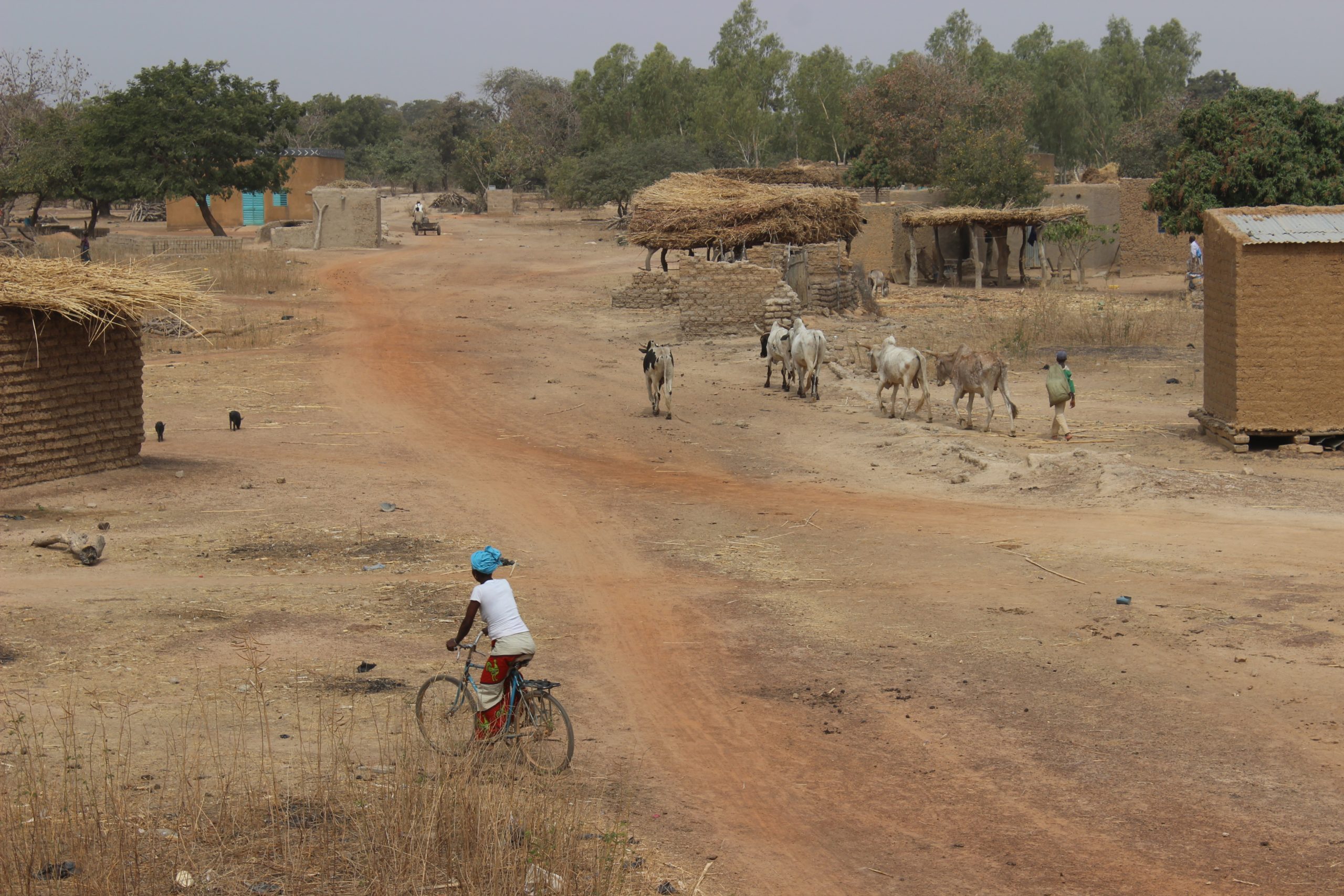 A woman rides a boke through a degraded landscape in Kalembouli, Burkina Faso.

“Against suggestions that it be cancelled, 23,000 people from around the world attended a mining convention in Toronto in March,” reports Joan Baxter. “Now, a government mining official from the Burkina Faso who attended the convention has tested positive for COVID-19, and the disease threatens to decimate that country.”

Click here to read “The possible horrible legacy of the ‘coronavirus convention.'” 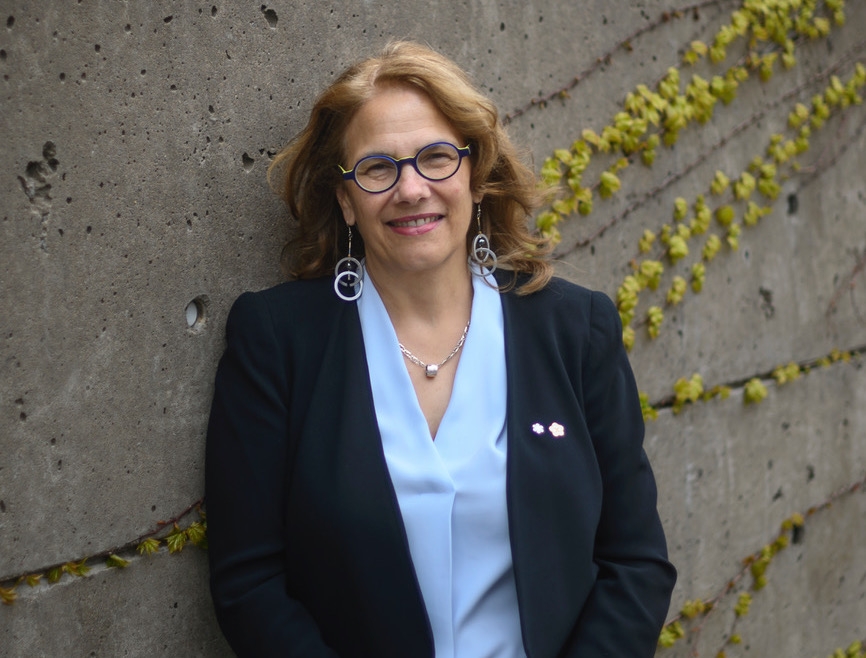 “It might seem counterintuitive to be thinking about what the world is going to look like after the current pandemic has passed, but it’s actually the ideal time,” reports Yvette d’Entremont. “That’s the firm belief of ethicist and Dalhousie University research professor Françoise Baylis.”

Click here to read “Françoise Baylis: What kind of world will we have when we come out of this crisis?”

Mary Campbell of the Cape Breton Spectator has compiled a detailed timeline of the spread of COVID-19 around the world and into Nova Scotia. It’s good to have all this information in one place, and I know I’ll be using it in the future to think about how we responded to the disease.

We’re removing the “On campus” section for the duration because it just makes everyone sad to see nothing at all. The “Government” section will be intermittent, as virtual meetings are called. 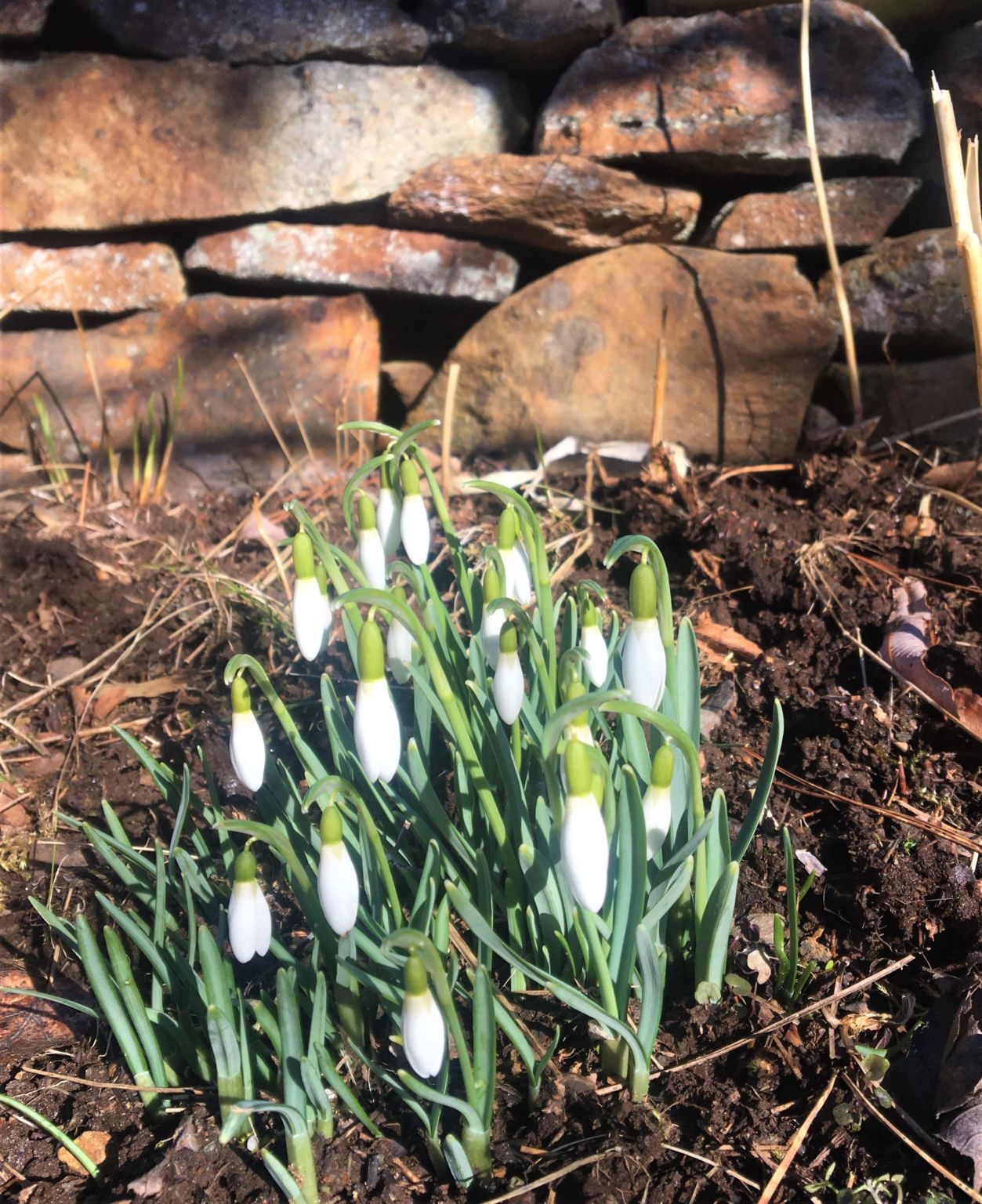 Stephen Archibald took a walk around the cove in hopes of finding signs of spring, but first he went to the cemetery, where there were signs of morbidity. Haven’t we had enough of that lately? Anyway, he did get to spring stuff. 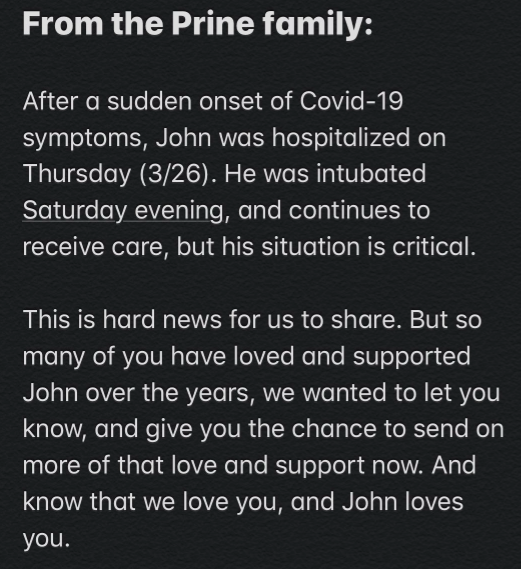 Yesterday, we learned the terrible news that John Prine has contracted COVID-19 and is in critical condition.

We’re going to see a lot of terrible news over the coming weeks, as the touchstones in our cultural lives start falling to this disease, and as it courses its way through our own community to our loved ones and friends, and some of ourselves. Here’s hoping Prine recovers.

I think John Prine has something to teach us in these difficult times. His talent, perhaps genius, is that he can view the world from his characters’ perspectives, get into those characters’ inner monologues, and give them the respect — even love — they deserve.

The most famous example is “Angel From Montgomery.” There aren’t many songs written by a man from a woman’s perspective, and yet (says this man, but also plenty of women), Prine lands it: the heartache, the losses, the emptiness of life of a 47-year-old woman. Does any single lyrical line better get at existential despair than  “To believe in this living is just a hard way to go”?

By my reckoning, one of the very best anti-war songs of all time is “Sam Stone,” the snapshot of a heroin-addicted veteran. We’re never told of the horrors Sam has seen, nor is the clusterfuck of his psyche detailed, but we understand exactly how he ends up in “a flag-draped casket on a local hero’s hill.”

Prine was 25 years old when “Hello in There” was released. I imagine it was inspired by the elderly people with “some hollow ancient eyes” that Prine must have met during his days as a letter carrier; they’d try to grab his attention and draw out the quick exchange of envelopes into a just barely longer moment of human connectedness before he continued on his rounds.

“Speed Of The Sound Of Loneliness” is a Prine song that asks us to do something difficult — have empathy for an domestic abuser, who “crossed the evil line today,” while at the same time feeling the emotional collapse of his victim. Re-listening to it this morning, I’m reminded of El Jones and the other prisoner advocates I know, who view the whole person, and not just the crime.

On a much more upbeat note, there’s “In Spite of Ourselves,” which is, sure, just a sweet song. But the sweetness lies in characters who can see themselves, and each other, warts and faults and all, and still come out of it loving each other.

That’s the lesson for these difficult times, I think. Cooped up together, or alone, everyone anxious, everyone on edge. Each of us will lose control at times. We’ll get angry, we’ll say and do stupid stuff. But we can get through this with empathy, with forgiveness, and with love.

City council is going to attempt to have a “virtual meeting” on Thursday. Details when we get them.

(Yes, besides everything else, we’re still working on the podcast. Deadlines are a-looming!)