You are here: Home / Featured / We’ll get around to that climate emergency eventually

This is an abbreviated Morning File because I have to be at the Supreme Court at 9am.

I’m going to court to join the CBC and the Canadian Press in their efforts to rescind the sealing order in the Glen Assoun case. That order was issued by Justice Chipman on October 23, 2014, as Assoun was applying to the Justice Department for intervention in his 1999 murder conviction. The order reads:

It is hereby ordered that:

You can see the entire document here.

I’ve been extremely frustrated by the police department’s response to this order, and have been contesting the department’s interpretation since January 2015. 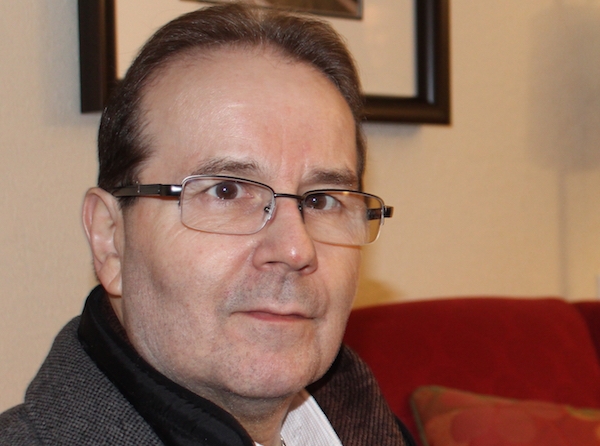 That’s when I first requested access to evidence that was used to convict Assoun in 1999. Among other evidence, I particularly wanted to view the videotaped testimony of Robin Hartrick, and reproduce it for readers.

Of course, now that Assoun has been exonerated, I want full access not just to the 1999 evidence but also to all the documents related to his exoneration — that is, all the stuff that was clearly covered by Chipman’s 2014 order, most notably the Justice Department’s investigation into the Assoun case, which led to the ministerial order for a new trial, which in effect exonerated him.

If all goes to plan, Chipman will today set a date of March 19 for a hearing to consider “Unsealing of Documents.”

This is silly and unneeded, in my opinion. I see the language of Chipman’s order as plain: “until the conclusion of the Ministerial review and any judicial proceedings arising therefrom” means exactly that. The Ministerial review is over and done with, and the judicial proceedings ended Friday at around 2pm. By terms of the sealing order itself, the “testimonial, documentary and physical evidence” is no longer sealed. Anyone who can read plain English can understand that. But here I am going to court to prove the point.

If allowed to speak today, I’m going to ask Chipman to affirm that his 2014 order says what it says it says, and leave it at that.

I’m getting the sense that the bureaucrats at the police department and the Justice Department are trying to delay release of these documents because they contain explosive information.

If the Examiner started a legal and investigative fund, is that something people would contribute to over and above the regular subscriptions?

2. We’ll get around to that climate emergency eventually

Remember when Halifax council declared a “climate emergency”? It was just six weeks ago. That unanimously approved motion acknowledged “the need to achieve net zero carbon emissions before 2050.”

So we’re going to get serious about that emergency, right?

Consider a perfectly reasonable request to the city by a group of young people called the Youth Climate Action Program, which is sponsored by iMatter, “just another group of humans trying to save the world.” iMatter is advised by folks such as Bill Lahey, president of King’s College; environmental law prof Jamie Simpson; and Robin Tress, a climate justice activist and organizer. In other words a progressively oriented group, but by no means Earth First!ers. 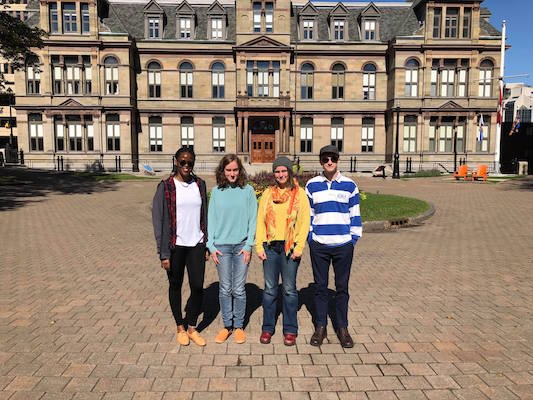 Anyway, the Youth Climate Action Program proposed to Halifax council’s Environment and Sustainability Standing Committee that the city get serious about meeting those greenhouse gas reduction goals. To that end, they asked the committee to pass the following resolution:

This is reasonable. It’s even weak, in the context of the global emergency facing us.

But, says city staff, let’s not be getting crazy. In a staff report written by Shilo Gempton, an Energy and Environment planner at the city, and approved by Peter Duncan, a mucky muck who is a manager of something or another, staff say the city already has a bureaucratic machine in motion to address climate change, something called the Community Energy and Climate Action Plan (CECAP), which was started last year:

The values of the CECAP initiative to embrace an inclusive stakeholder process with achievable targets, goals and strategies for climate change is critical and must be respected for a collaborative, community based problem-solving outcome. Guidance for stakeholder engagement in community energy planning can be found from the Community Energy Knowledge Action Partnership in their document A Primer on Stakeholder Engagement in Community Energy Planning. The document identifies that stakeholder engagement should be a process where stakeholders “are consulted and involved in the development of actionable agendas and implementation plans” which includes two broad objectives to empower stakeholders through buy-in and participation in the planning process as well as mutual capacity building through the exchange of knowledge and sharing of resources.

Predetermined mitigation targets set without engagement or consultation may pose a risk to the CECAP project development and outcomes, as it could be perceived that the process is not an authentic, genuine, inclusive, community-based approach. As a result, the project could become compromised if stakeholders withdraw from a process with a pre-determined outcome, thereby reducing the importance and validity of their inputs, capacity, and resources.

The specific target of net zero by 2040 cannot be recommended for adoption as it circumvents the ongoing stakeholder engagement and climate modelling work.

If I were 30 years younger, I think I’d be burning shit down.

As I say, an abbreviated Morning File. I probably should have gotten a guest writer.

But I have two articles to be processed and published today, one written by Linda Pannozzo and one written by Joan Baxter. Both relate to the Northern Pulp mill. I’ll get to them when I can.

Stephen Archibald has a delightful photo essay about what he calls “real fake wood grain“:

Do you have feelings about fake wood grain finishes? For many of us, who came of age in the 60s and 70s, it was synonymous with cheap, artificial, and unattractive, because we were surrounded by wood grained crap. Sheets of wood grain paneling covered the walls of innumerable rec rooms, and vinyl siding with embossed wood patterns clad whole neighbourhoods. Kitchens were filled with wood grain covered appliances, such as this 1970s electric oven. 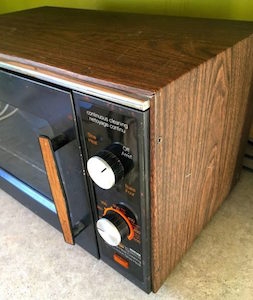 My sense is that fake wood grain has become less ubiquitous (or less offensive) over the decades, so I was fascinated to notice that a couple of new buildings, I admire, had sipped the wood grain Kool-Aid.

This got me thinking about the fake wood I really do love, the hand painted wood grain that was super popular throughout the 19th century for interior wood work.

Archibald goes into great detail about, well, detail, with lots of photos of examples. Go to the link to see for yourself, but my favourite is this:

My sense is that painted grain was incredibly common, in the last half of the 19th century, on the interior woodwork of Nova Scotian homes and businesses. Much has been lost but it is still possible to get glimpses of old decorating schemes. The woodwork in the principle rooms in the Lawrence House Museum in Maitland were painted plain colours in the 1960s. But open the door to the attic stairs and there is a time capsule that shows how wild the house would have once looked: 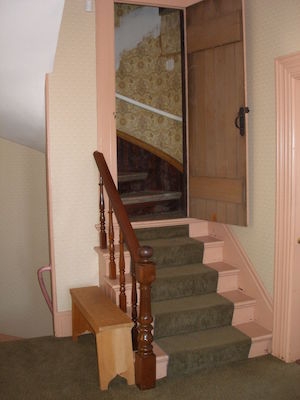 The risers on the stairs are painted red and black to suggest rosewood. The gold coloured woodwork is combed to simulate oak, and the treads of the stairs are marbleized. Delightful! 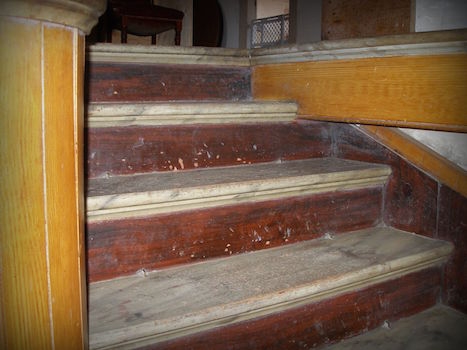 Maine, 1980. A utopian community is on the verge of collapse. The charismatic leader’s authority teeters as his followers come to realize they’ve been exploited for too long. To make matters worse, the eleven-year-old son of one adherent learns that his mother has cancer.

Taking refuge in his imagination, the boy begins to speak of another time and place. His parents believe he is remembering his own life before birth. This memory, a story within the story of Blood Fable, is an epic tale about the search for a lost city refracted through the lens of the adventures the boy loves to read. But strangely, as the world around them falls apart, he and his parents find that his story seems to foretell the events unfolding in their present lives.​ 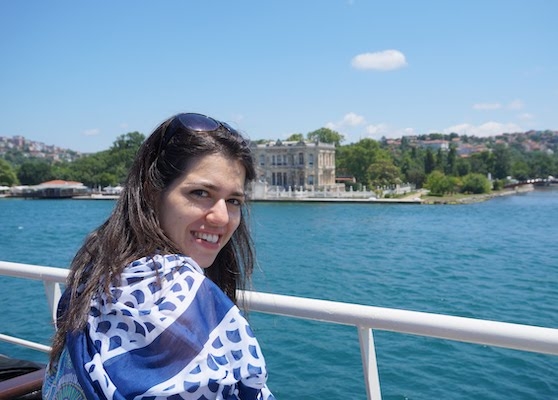 Ethics and Epistemology in the Digital Revolution (Friday, 3:30pm, Room 1130, Marion McCain Building) — Maggie Little from the Kennedy Institute of Ethics at Georgetown University will speak. 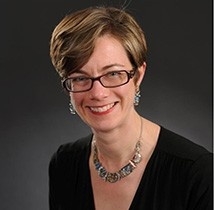 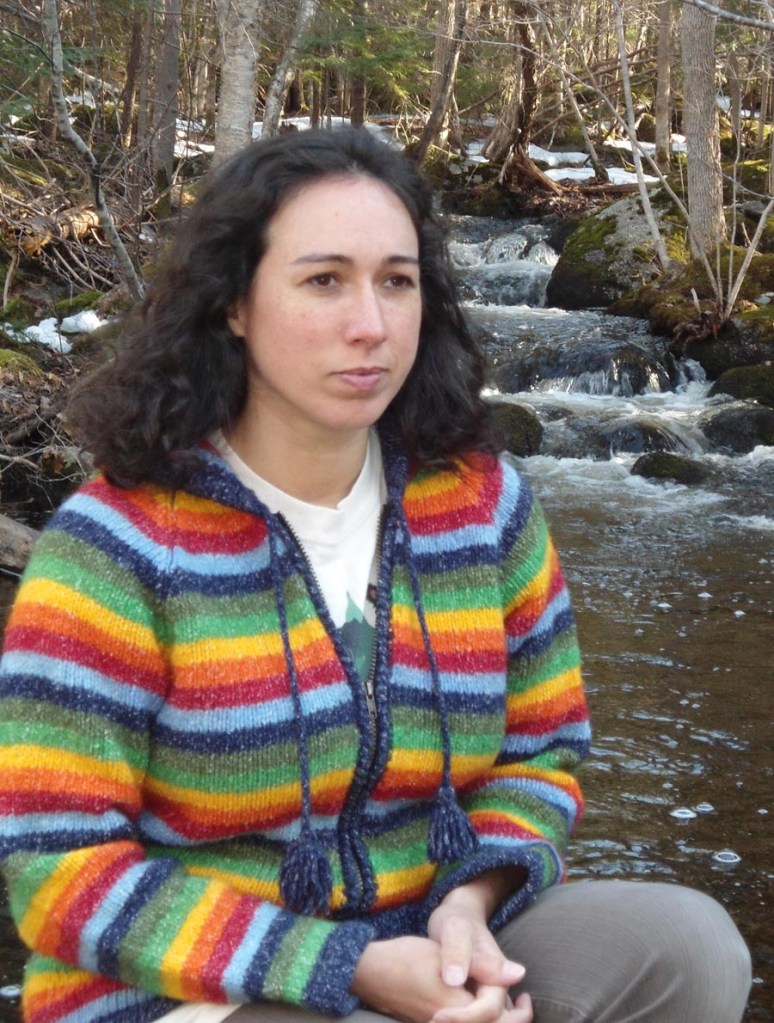 An evening of readings and sharing with Mi’kmaw writer, performance artist, and storyteller Shalan Joudry. The author of Generations Re-merging (Gaspereau Press, 2014) and Elapultiek (a new play premiered by Two Planks and a Passion in 2018), Shalan Joudry is also the producer and co-host of the exciting new podcast, “Trails, Tales, and Spruce Tea”.

I’m off to court.