You are here: Home / Featured / We the North: Black lives only matter when they are shooting a basketball 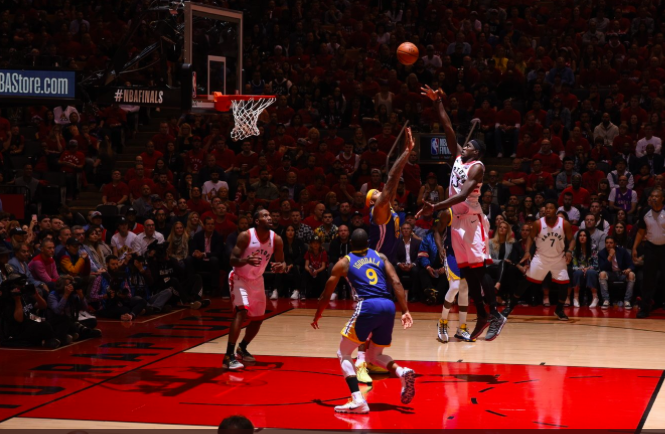 In Ottawa, one of the legal advocates for the Elizabeth Fry Society tells me that the Human Rights Commission refused to speak with Black gay women in prison.

E. Fry filed a complaint that argues that Correctional Services of Canada (CSC) discriminates on the grounds of sex, race, ethnicity, and mental disability in its programming classification. The Human Rights Commission claimed the complaint could only focus on Indigenous women as they had no evidence of anti-Black discrimination, and so the experiences of incarcerated Black women were dismissed.

The erasure of Black people in Canada is nothing new. As Anthony Morgan argues:

“But this is Canada!”, our sense of Canadian racial exceptionalism pushes some of us proclaim. “It’s Americans that have a race problem, not us! These attention-seeking black radical activists complaining about ‘anti-black racism,’ or whatever, are being aided by the left-leaning media to complain about American problems that we simply don’t have here.”

Blacks in Canada are so often met with this kind of response when we speak about our lived experience that just being black in Canada can feel deflating, paralyzing and oppressive. So, often many of us just sigh heavily while silently bearing our unrecognized truths and expressing ourselves in an exasperated version of the popularized protest chant, “I can’t breathe.”

I think about these invisible Black women behind prison walls as I drive from Ottawa to Toronto. The Raptors are playing Game Two of the NBA Finals, and suddenly Black men matter to Canada. “We the North” says the playoff slogan, because when “we” are winning, Black people miraculously become fully Canadian. Of course, when people talk about how police need to racially profile Black people for “public safety,” what is implicit is that the Canadian public is white. The safety of Black people, we understand, must be collateral damage for the broader “public,” the public who counts.

Because I am now “bringing race into it,” I anticipate angry comments from white people who will condemn me while arguing that race has nothing to do with these playoffs.

Because this makes me an uppity Black woman, these “colourblind” fans will freely threaten me. They will rage at me for thinking that discussions of racial profiling or the recent poll revealing that 42% of Canadians think there are too many non-white immigrants to Canada have anything to do with Canada throwing a party for the Raptors.

People will be angry at me for bringing these things up during this national party, and that rage will be encouraged. Black people, though, we are never allowed to be angry, not at policing, not at abuse online, not at injustice. We party too, by the way, and celebrate, and wear the jersey, and also know — as Colin Kaepernick brings home to us — that race was always part of it, in a country that celebrates Cameroonian player Pascal Siakam and simultaneously thinks that too many Africans are crossing the borders and leaves people struggling across in winter to lose their limbs to frostbite.

It’s an odd moment. The two news stories dominating my feed are the Raptors playing in the finals, and the report from the National Inquiry into Missing and Murdered Indigenous Women and Girls due to be released on Monday morning. Leaks from the report declare a “Canadian genocide.” On Sunday night, the news gleefully shows Canadians coast to coast partying. On Monday morning, we think about highways of tears, and residential schools, and un-investigated disappearances. We the North.

The playoffs provide another occasion for myths of polite, diverse, Canada. The U.S. media runs with this idea of Canadian exceptionalism. Warriors coach Steve Kerr was quoted celebrating Canadian “niceness”:

“Frankly it’s fun to be in these environments, to be challenged, to be threatened,” the 53-year-old coach said. “Especially because the Canadian fans are so nice that even when they’re harassing us, they do it in a very polite manner.”

In the same week in Toronto, the Ontario Human Rights Tribunal heard from the police lawyer that police had “no alternative” but to handcuff and shackle a six-year-old Black girl. This love for Black players, and this “coming together” for something “bigger than ourselves,” this niceness, doesn’t extend to compassion for six-year-old Black children. I wonder what the Venn Diagram would look like for people who believe the Raptors are “bringing us together” who also left comments online defending the police shackling this girl’s ankles, and who call her mother, diagnosed with cancer, names.

Also in our polite country, police and RCMP in Halifax have declined to apologize for racial profiling.

Also this week, a Supreme Court of Canada decision acknowledged widespread racial profiling. Here is one portion of that decision:

Our colleague makes much of the fact that the trial judge said that the police spoke “cordially” when they first entered the backyard. “Cordially” was the label chosen by the judge and was not a descriptor used by any witness. The only evidence comes from one of the young men who said that the police asked “how are you guys doing?” as they entered the backyard. There was no evidence about the tone of voice employed, but only a recollection of the words

In our view, even accepting that there was a cordial greeting, the contemporaneous actions of the police and the language employed immediately after that statement illustrate the police were exerting dominion over the individuals in the backyard from the time of entry. In many instances, and this is one of them, actions speak louder than words. The nicest of hellos could not mask the fact that the three persons entering onto this private property were uniformed police officers acting without permission, consent or legal authorization.

It strikes me that this portion of the decision is the perfect description of the myth of Canadian politeness. Even when they’re harassing us, they do it in a very polite manner.

Still, Black people are all the rage right now in Canada. Businesses are offering Kawhi Leonard “everything from free food for life to luxury penthouses to persuade him to stay.” Meanwhile, in 2018, housing in Toronto hit a “danger point.” In 2017, 100 people died while homeless in Toronto. Toronto Community Housing houses 4% of the city’s population, but experiences a quarter of all shootings and homicides. The response isn’t to address the social causes of crime, it’s to try to evict families.

This is after the report by Justice Tulloch that makes clear the extent of racial profiling in Ontario, and the report by the Ontario Human Rights Commission laying bare the “grossly” disproportionate ways Black people in Toronto are surveilled, policed, charged, criminalized, and killed. In a city that designates Black people criminal, the solution is to simply push Black people onto the streets.

On those streets, there is also a crisis of availability of public bathrooms. Toronto has a “public defecation problem.” During the playoffs, though, the city accommodates the public viewing parties and drinkers by providing portable toilets. Community centres that couldn’t house people experiencing homelessness during the extreme cold weather talk about opening to host viewing parties.

We know how to do this, how to live and provide as a community; it’s just we choose not to do it any other time.

And that’s why I think of those forgotten Black women in prison. It costs over $200,000  a year to incarcerate a woman in federal prison. That costs goes up 10 times for prisoners held in segregation. It only costs a little over $18,000 a year to house a person in the community instead. The cost of one federal prisoner could pay for five students.

And since Black lives only matter when they are shooting a basketball, we don’t even speak about Black women in prison.

It’s not true that we can’t imagine better, juster things to do with our money. We can imagine what it looks like to provide housing, and toilets. We just don’t want to do it any other time. And because we don’t provide housing, or treatment, or resources, or education, because we pour that money into policing and prisons, we the north end up in a country where the morning after the game, we read a report about murdered and missing Indigenous women and girls.

This morning, Marion Buller, chief commissioner of the Inquiry, said:

As a nation, we face a crisis: regardless of which number of missing and murdered Indigenous women and girls is cited, the number is too great. The continuing murders, disappearances and violence prove that this crisis has escalated to a national emergency that calls for timely and effective responses.

This is not what Canada is supposed to be about; it is not what it purports to stand for.