You are here: Home / Featured / “We lost one of the good guys:” Robert Devet’s impact on African Nova Scotian stories

Poet and author Angela Bowden said before she ever met Robert Devet or knew his name she saw him at various social justice events in Halifax.

“[He had] a tape recorder in one hand, notepad in the other, ready to create space, and provide a platform for every vulnerable and marginalized person, community, or circumstance,” Bowden said.

Robert Devet passed away on September 27. He was the publisher, editor, and main contributor to The Nova Scotia Advocate, a news website he founded in 2016. On its website, the Advocate is described as “a voice for the many Nova Scotians who too often are ignored.” 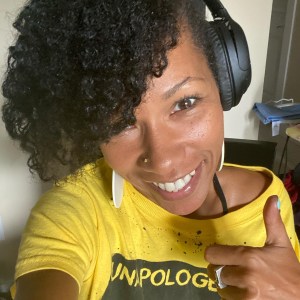 Bowden said Devet first reached out to her in October 2018 after he heard her deliver a speech at Justice for Nhlanhla Dlamini rally on Barrington Street a few days prior. Dlamini, a young Black man, was 21 when Shawn Wade Hynes, a 43-year-old white man, shot him with a nail gun and punctured his lung while he was working at a construction site in Pictou County. Hynes, who was later charged, convicted, and given an 18-month house arrest sentence for the attack this past April, was said to have bullied Dlamini and called him the N-word in the weeks leading up to the attack.

“Many of our white readers don’t understand the impact of these racist incidents on the Black community here, and you articulated it very well,” Devet told Bowden in his introductory e-mail. Bowden said he asked her permission to transcribe her speech and publish it on The Advocate, to which she agreed.

“He told me that The Nova Scotia Advocate was always looking for poets and writers and then invited me to submit in the new year. I did. I submitted my first poem, ‘Kinda Hate’ on February 23, 2019. He loved it and he has been one of my strongest allies and supporters since,” Bowden said.

Bowden went on to publish number of writings on the site that dealt with issues such as race, racism, reparations, the Black experience, and criminal injustice. 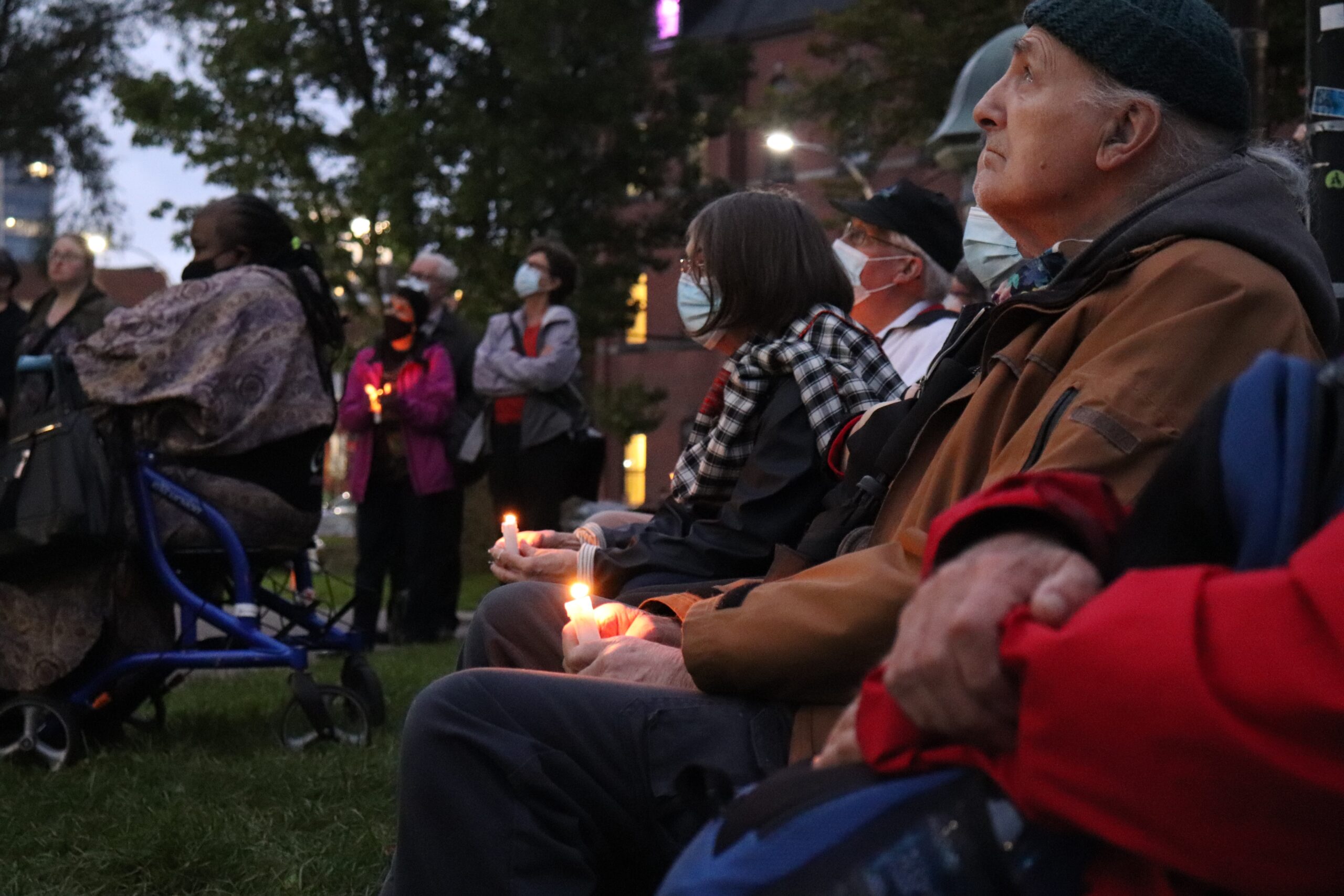 A public memorial and rally was held for Devet Thursday night outside of the former Memorial Library on Spring Garden Road.

Black university professor, activist, and Examiner contributor El Jones was the emcee. Prior to the event, she spoke with The Examiner about Devet and The Nova Scotia Advocate’s impact on the Black community. 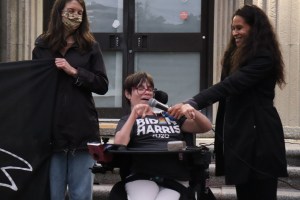 “Certainly, Robert never presented himself as somebody saving Black people, in fact, he invested quite a lot in making sure that Black people were speaking for ourselves,” she said.

“He would always come and do the coverage with the community. So, instead of having the only coverage being … mainstream coverage, you would have coverage from the point of view of the community.”

“He believed journalism belonged to everybody  … So many of my poems are up on his site, he’d just come up and be like ‘Can I publish that?’”

Black Nova Scotian community activist Lynn Jones, who Bowden said was the one who originally put Devet in touch with her, also attended Thursday’s memorial. Before leading the crowd in song and talking about how Devet originally reached out to her, she encouraged those in attendance to reflect and give themselves credit for coming together. 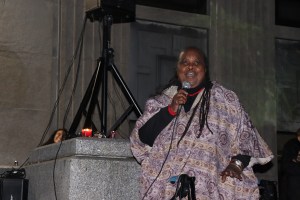 “I got to talk with many people tonight, and I’m thinking, that we don’t give ourselves credit often for the great work that we’re doing here in Halifax, we really don’t,” she said. “When you think of the representation of communities here tonight to honour one of our own — we’ve mentioned there’s poverty issues, there are persons with disabilities, there are issues of anti-racism, I know I’ve left out many, but we’re all gathered together in this space with one focus and one ideal, and one way to praise and honour one of our own. And we need to congratulate ourselves for knowing how important it was to come together tonight to do that.”

Impact on the Black community 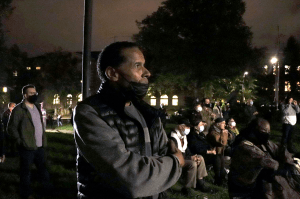 Black community advocate Raymond Sheppard also spoke at the memorial to Devet. Sheppard, who’s said he’s been advocating for the Black community for close to 50 years, also wrote a number of op-ed pieces for The Advocate dating back to November 2018.

“I really came into myself, if you will, as a writer, in writing for The Nova Scotia Advocate,” he said in an interview following the memorial Thursday. “Because I could write on anything pertaining to The Struggle — the struggle that African Nova Scotians have on a daily basis, and African North Americans for that matter. So I got to write better, I got to write the things that really mattered, and still matter.”

The day before the memorial, Sheppard testified at the inquiry into the murder-suicide of Lionel Desmond, a Black member of the Canadian Armed Forces. Sheppard, a cousin to Desmond, said that writing “four or five” articles in The Nova Scotia Advocate about his cousin and the racism he experienced in the Canadian Armed Forces both helped him gain a lot of insight, and also helped him, unknowingly, prepare for his testimony. 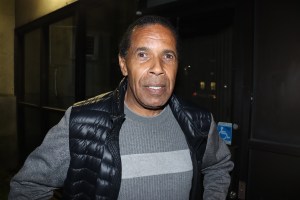 “I got a number of feedbacks … from persons of European descent that knew Lionel and had served in the Canadian Armed Forces and spoke out in terms of saying that they could understand, to the degree they can, what he went through in the Forces because he was called everything but his own name.”

Sheppard said he also received a lot of feedback from current and retired Black members of the Canadian Forces who said they could directly relate to a lot of what Sheppard described Desmond having gone through.

“I already had written in The Advocate what I would say, so I added a few things and then presented it to the inquiry on the 13th of October,” he said.

Sheppard also spoke about the legacy of Robert Devet.

“I simply believe that Robert was one of the truest allies to the African Nova Scotia community,” Sheppard said. “We have limited access to the media, limited access to get our voices out, to get our concerns out in the public sphere, so Robert was a true advocate. And I don’t say that about many people, at all, especially non-African people. But Robert was a true ally to the African Nova Scotia community, to the struggle, and he made a difference in giving some of the voiceless in our province a voice and tackled the issues that other media outlets would never tackle.”

“He set the bar high, and I think it is necessary to continue it.” 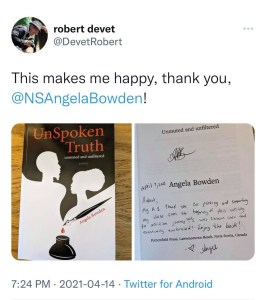 Angela Bowden said she “immediately broke down” when Lynn Jones delivered her the news of Devet’s passing.

“He has brought this province some of the most honest, in-depth reporting on issues mainstream media glazes over or ignores. He was the people’s friend. All people. All races, religion, gender and class,” she said. “Nova Scotia journalism will never be the same. We lost one of the good guys.”

At the behest of Devet’s family, The Nova Scotia Advocate has ceased publishing new articles, which they say Devet himself would have wanted. The website, however, will remain as is with all of its articles archived and still available to read at nsadvocate.org.