Snowpocalypse is upon us. Global has branded the storm the “Blizzard of 2015,” which hopefully assumes there won’t be another one next week or whatever. Or, maybe this is a forecast for the end of the world. At least CBC reporters will have something to do as they cover the four horsemen riding up Barrington Street, inevitably to the boardwalk. Always the boardwalk: 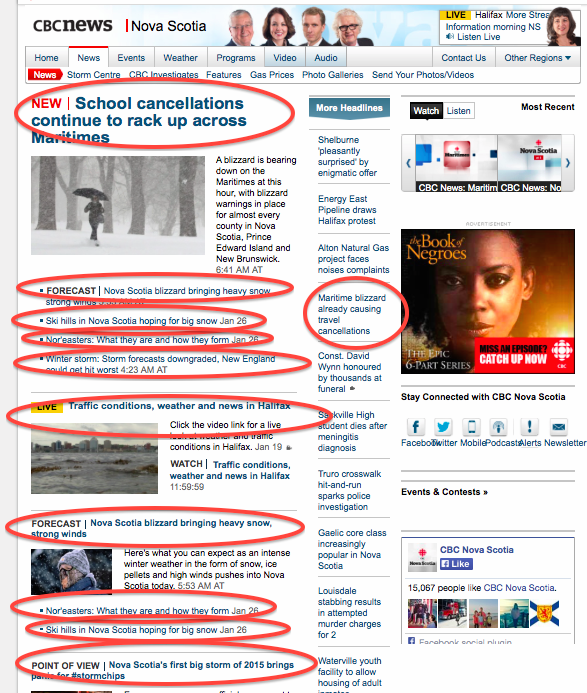 For the rest of us, there’s nothing to do but sit around and wait to die.

Dalhousie Dentistry School student Ryan Millet has agreed to participate in the disciplinary hearing related to the misogynistic Facebook page that he says he exposed. “In a letter to the university’s senate, [Millet’s lawyer] Bruce MacIntosh said student Ryan Millet is willing to continue with the hearing before the school’s academic standards committee on Wednesday even though MacIntosh believes the process is flawed,” writes the CP’s Michael McDonald. “The secretariat for the senate referred calls to university spokesman Brian Leadbetter. Leadbetter couldn’t be reached for comment.”

That phrase — “Leadbetter couldn’t be reached for comment” — will be etched upon Leadbetter’s tombstone.

Seventeen-year-old Rylee Sears has died from meningococcal meningitis. “Public health officials have spoken to more than 130 people identified through ‘contact tracing’ as potentially at risk for exposure to the bacterial meningitis that claimed the life of the grade 10 boy on Monday morning,” reports Ruth Davenport.

Ian MacLeod of the Dartmouth-based Form:Media has been hired to brand Yarmouth, reports Timothy Gillespie in South Coast Today:

MacLeod explained that the constellation-themed branding logo and slogan, “On the edge of everywhere” could be readily used as an “anchor” to promote food and wine, music, sports. “This is the edge you’ve been waiting for”, he added.

Her council was not so impressed and appeared to have serious reservations about the branding package.

As unique as the slogan “on the edge of everywhere” might appear, it is used as the title of two blogs; one an account of a family’s move to Belgium and other the blogging of a feminist who has decided to remain asexual. 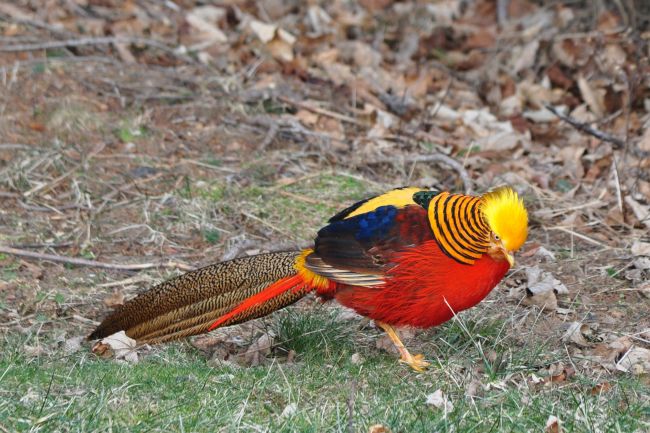 A Golden Pheasant escaped from the Van Tassel Family Corral Farm, attracting a lot of attention in Digby. 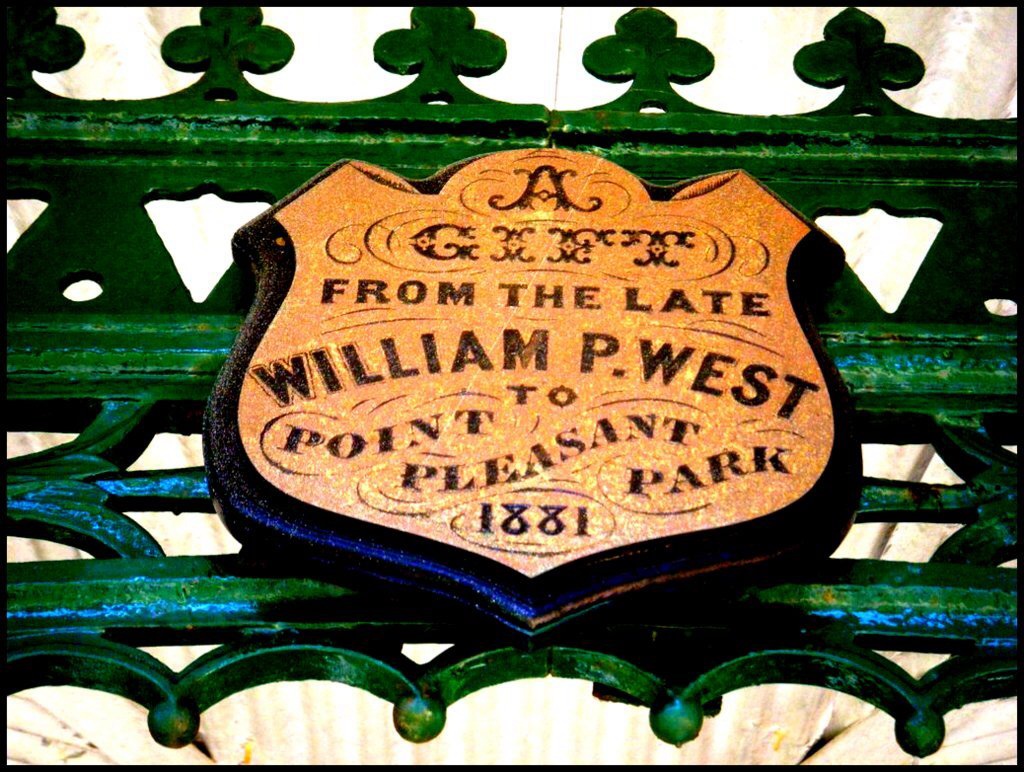 “It can be a message in chalk on the sidewalk or a memorial cast in bronze, someone tried to communicate with us so let’s pause and appreciate their effort,” says Stephen Archibald.

Nova Scotia’s confusion over apostrophes in place names may have originated with the Gaelic, who have no apostrophe, an anonymous Gaelicphobe tells Parker Donham.

City council (postponed)—Due to a monster lizard approaching the city, today’s meeting has been rescheduled for tomorrow. I’ve written a preview of the meeting, here. This article is behind the Examiner’s pay wall and so available only to paid subscribers. To purchase a subscription, click here.

Standing Committee on Human Resources (cancelled)—This meeting has been cancelled due to the storm, with no rescheduled date yet announced.

When the committee does meet, it will question Janice Ainsworth, cochair of the Collaborative Partnership Network, which is a coalition of nine nonprofit agencies that find job placements for people with disabilities. Last year, the provincial Department of Labour provided $383,448.46 in funding to the Network, while the Department of Community Services provided another $7,758.75. The Partnership’s member agencies were funded as follows:

Employment Opportunities Partnership
This agency receives no direct funding from the province, but judging from its website I believe it is funded through the Collaborative Partnership Network.

Grand total, government funding for the Partnership and its member agencies—$5,023,027.73

I put these numbers out there not to suggest that the money is being spent unwisely, but rather as follow-up to many conversations I’ve had with disability advocate Gus Reed. As with so many other things on my table, I’ve pushed this to the back burner (to badly mix a metaphor), but together, Reed and I have wondered what the lay of the land is with these agencies, so now we know.

All local universities are closed today.

Assisted Dying (Wednesday, 7pm, Room 105, Weldon Law Building)—Jocelyn Downie will lead a “Conversation About Dying: What the law has to say.” In explanation:

The Supreme Court of Canada is considering whether to strike down the Criminal Code prohibitions on assisted dying. The Quebec legislature has passed “An Act respecting end-of-life care” to permit medical aid in dying. Draft legislation has been introduced in both the House of Commons and the Senate. Professor Downie will talk about these major developments in the law on assisted dying, and invite us to think about some of the open questions still to e answered. 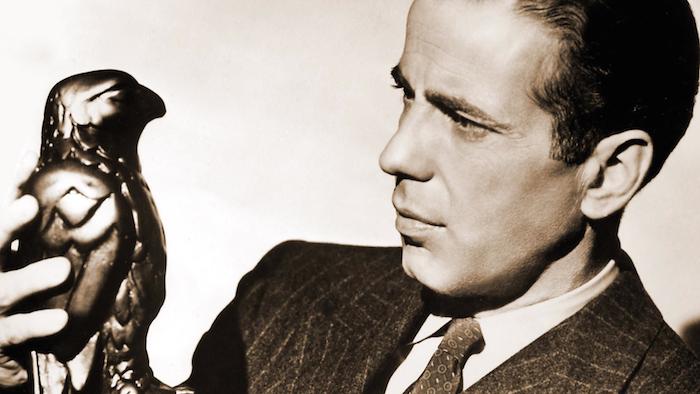 The Maltese Falcon (Wednesday, 8pm, Dalhousie Art Gallery)—one of the best films ever will be screened.

I had planned to fill this space today with a hilarious riff on “bold Halifax” from 1995, but due to technical issues (I can’t read my own hand-written notes), that will have to wait a few days. In the meanwhile, let’s remember that it used to snow a lot more than it does nowadays, and back in the day, you not only had to shovel the sidewalk in front of your house, but also the street. I draw your attention to Section 34 of the Public Highways Act, which is still in effect and very much the law of the land:

Duty of male to shovel snow on highway

34 (1) All physically fit male persons between the ages of sixteen and sixty, residing within every such section or division, are required to work with their shovels on the highways during the winter whenever the highways become impassable from snow, but persons actually in regular attendance at any public school are not, during school hours, required to work under this Section.

(2) If a person does not attend for work in accordance with subsection (1), the overseer shall order him to attend for that work either forthwith or at any time or hour of the day that the overseer designates.

(3) Every person ordered to attend for work shall

(a) attend for work and work as aforesaid;

(b) provide a competent person to work and who shall work in his place; or

(c) pay to the overseer on the day on which he is ordered to work a tax of five dollars for the use of the municipality.

(4) The overseer shall expend any sum paid to him under clause (c) of subsection (3) for the purpose of removing the snow from the highway and making it passable, and shall account to the municipality for all sums so received and expended.

(5) An order of the overseer shall be sufficiently communicated if delivered or given, verbally or in writing, at the usual place of residence of the person, to some inmate thereof apparently not under sixteen years of age.

(6) If any person ordered under this Section to attend for work fails to comply with this Section, he is liable to a penalty of not less than five dollars nor more than ten dollars, and in default of payment thereof to imprisonment for not more than ten days.  R.S., c. 371, s. 34. 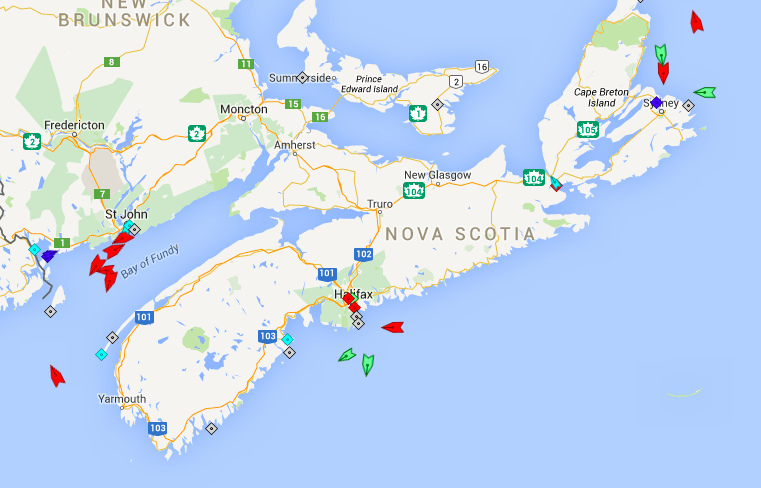 The seas around Nova Scotia, 7:30am Tuesday. Map: marinetraffic.com

Verige, oil tanker, arriving from Quebec, was approaching Imperial Oil at 7:30am. Typically, ships don’t risk entering the harbour during a storm, so this is probably the only activity today.

• I had written that SMU was going to introduce “candidates,” plural, for the SMU presidency tonight, but in reality the event was to introduce the “candidate,” singular. That is, the administration has already chosen who will be president. This is a union grievance, as the selection process was done behind closed doors without faculty input. Due to the storm, the university is closed today, with no update scheduled until 7pm, so presumably the announcement will be delayed.

• Dalhousie has a “senate,” not a “faculty senate” as I had written yesterday. They dropped the “faculty” part many years ago because students also sit on the senate.

• Before he became chief of the Halifax Regional Fire and Emergency Service, Mike Eddy was fire chief in Sackville, not Halifax, as I had reported.

I regret the errors.