You are here: Home / Black Nova Scotia / Virtual panel discusses the ongoing legacy of slavery and the topic of reparations On Monday, Cikiah Thomas, Delvina Bernard, and Andrea Douglas participated in a ‘Pre-Conference Event for 2023 Universities Studying Slavery Conference, which was moderated by Isaac Saney.

On Monday, speakers at a virtual panel discussion talked about reparations and the ongoing legacy of slavery from Nova Scotian and Canadian perspectives. The event was hosted by Dalhousie University, University of King’s College, and the Black Cultural Centre for Nova Scotia and was advertised as a pre-conference event for the 2023 Universities Studying Slavery Conference to be hosted by University of King’s College. Isaac Saney, director of the transition year program, moderated the three-person panel.

“What research clearly shows us is that, unlike the Scottish, the British, the French, the Germans, and others who came here to unrightfully occupy the lands of Indigenous nations in this Canada, for people of African descent to Nova Scotia, ours was not a mission of discovery, or of expansionism, or even a quest for religious actualization, which was the case of German arrivals,” she said.

“Ours was not a case of pilgrimage freely and willing boarding ships to venture cross the Atlantic Ocean unbonded, unindentured, and unbounded. Rather, ours is a story of quest for freedom from cattle slavery and cultural genocide. Ours is a story of an escape plan that involved calculated risks, and the possibility of a brutal death at the hands of slave catchers [and] bounty hunters if all did not go as planned.” 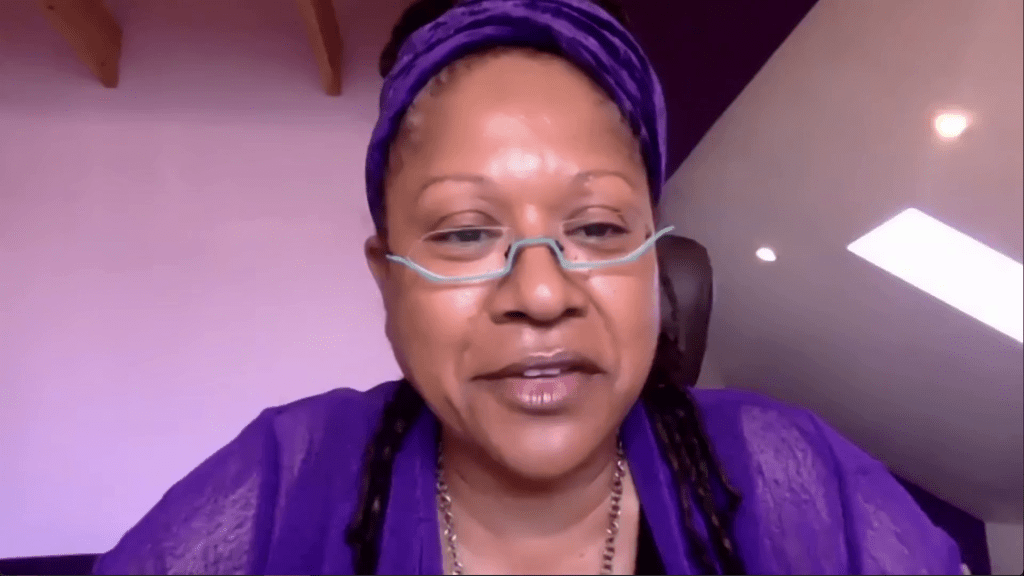 Delvina Bernard speaks at a virtual panel on reparations and slavery

Andrea Douglas, the director of the Jefferson School — African American Heritage Center in Charlottesville, Virginia, said some people believe “we’re rocking the boat,” and believe that that, in of itself, is another avenue toward social trauma and harm.

“How do we personalize this and so that people see a stake for themselves in the overall conversation about reparations?” Douglas said. “Because otherwise, even Black people are not so keen, necessarily, to discuss it.”

Cikiah Thomas, the chairperson of the international working committee of the Global African Congress, doubled down on Douglas’ comments and spoke about what he sees as some of the major difficulties in getting conversations about reparations off the ground in the first place.

Thomas noted that Canada “was a major slaveholding country and contributed significantly to the rape of Africa and the degradation and dehumanization of Africans.” He said this is widely unknown both outside and within Canada itself.

“Since the 1600s Africans have lived in every region of the country,” he said. “Today, African Canadians reside mainly in Ontario, Quebec, Nova Scotia, and tend to favour the urban centre. In these centres, African Canadians are at the bottom of the economic and social ladder, irrespective of the length of time over which they have resided in various areas.”

Thomas talked about how many Black Canadians continue to be subjected to discrimination, negative profile, and “denial of access and opportunity essential for health and advancement.” As a result, he said many Black Canadians in urban centres such as Halifax endure the “continued crisis” characterized by low income, housing issues and homelessness, exclusion from higher education, high rates of physical and mental health issues, political marginalization, overrepresentation in the prison system, and more.

Additionally, Thomas said that many of these factors not only intersect but are intergenerational.

“When we speak about reparations and we talk about Canada, it’s a strange phenomenon. And therefore, I think it’s embedded upon us to set the record straight,” said Thomas. Cikiah Thomas speaks at a virtual panel on reparations and slavery

Bernard went on to talk about how the legacy of slavery and discrimination has continued effects that we have a hard time wrapping our heads around in a modern context. She spoke about reports that continue to show the wealth gap between Black and white people in Canada, as well as reports that show the impact of intergenerational wealth and how it maintains and even widens that gap.

“Sadly, the majority, I think, of Black Canadians accept the current economic system at face value,” Bernard said. “And we don’t question, in some ways, the economic status quo, even though we’re not the benefactors.”

“These Eurocentric models of development are the very reason why African people in Nova Scotia and elsewhere in the world are largely living in a state of social, cultural, political, and economic underdevelopment.”

Monday marked the second week of a criminal trial for people believed to be behind the deadly ‘Unite The Right’ white supremacist rally in 2017 in Charlottesville, Virginia where Andrea Douglas lives and works. Douglas points to the 2017 rally as something that marked a shift in the thinking around the issue, or the prospect of reparations.

“This conversation only became consumable within this space of undeniable truth,” she said. “[We need] to continue to find a way to engage in the personal experience in order to make it real in that way, and remove this sort of distance of history from it.” Andrea Douglas speaks at a virtual panel on reparations and slavery

The panel discussion also took place on the eve of the gubernatorial election in Virginia where Douglas lives and works. Douglas talked about how the Republican nominee being elected could have a negative impact on the issue of reparations where the Republican candidate is in favour of removing what’s known as critical race theory — what she says essentially amounts to African American History, particularly as it relates to slavery — from public schools.

In addition to talking about health disparities for Blacks and how many of them were exposed by the COVID pandemic, one of the audience questions for the panel centered around allyship — with white people and other groups. Bernard cautioned about the importance for Black people to be thoughtful and selective when seeking allyship.

“When it comes to allies, we ought to at least be very mindful about our history in terms of when we’ve engaged others in our go-forward plans,” she said. “We know that during the Civil Rights movement, many others who were also part of their own rights revolutions — whether it was women’s issues, whether it was anti-war movement, whether it was a struggle for gender equality, LGTBQ+ rights, etc. — many of these other marginalized communities joined forces with people of African descent during civil rights time to promote our issues.”

“But we know that as they elevated their conditions, people went off into their siloes, into their own rights revolutions, and we got left behind. … So I would say we need to learn from that history and be very selective about when and where others enter into our strategy toward reparatory justice so that it doesn’t get taken over. Or forgotten, or neglected.”

The discussion preceded a keynote address later in the evening by Professor Sir Hilary Beckles, vice-chancellor of the University of the West Indies. Videos recordings of both the discussion and keynote will be available at a later date.