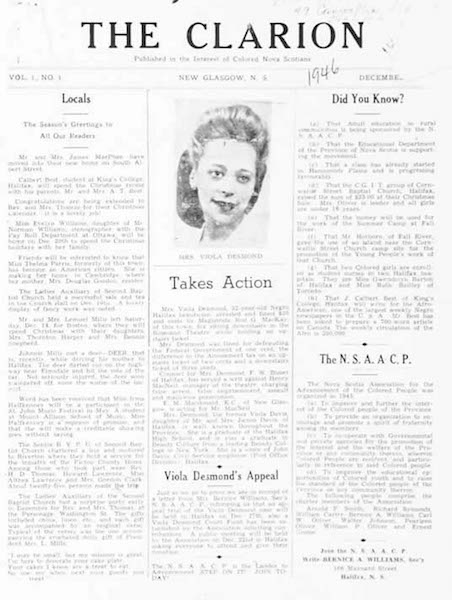 Having abandoned my dream to become a prison warden, I came late to a journalism career.  There was one other Black woman at the San Francisco Chronicle when I joined the staff, as a rookie reporter, in the mid-1980s. But having had a falling out with the powers-that-be over the paper’s lackluster coverage of the local Black community, she refused to set foot in the main newsroom. Instead, she worked from a satellite bureau.

One day, the woman “sent word,” noting that she knew I’d been hired and extended an invitation for lunch (in another city). I’m still grateful for the counsel she gave me on the strategies I’d need to develop to counter the paper’s then routine diss of marginalized groups. A few years later, the woman was appointed editor-in-chief of a competing newspaper. I can still see the panicked faces of Chronicle managers when I arrived at my desk that morning, humming “Oops Upside your Head.”

The historic selection of Halifax native Viola Desmond as the first Canadian woman whose visage will grace the front of a bank note ($10) has prompted me to reflect on Best and her pivtoal role in bringing Desmond’s saga out of the shadows.

The first Black owner and publisher of a newspaper (The Clarion) dedicated to the African-Nova Scotian community, Best broke the story about Desmond’s arrest, in 1946, after her refusal to relinquish her seat in a “whites-only” section at the Roseland cinema in New Glasgow.

Born in the city in 1903, Best was well-versed in the Roseland’s segregationist customs. In 1943, in a curtain-raiser to Desmond’s experience, she’d  bought downstairs tickets for herself and her son — future diplomat James Calbert Best — to see a film at the venue. They were both removed from the theatre and later unsuccessful in their legal attempt to challenge the theatre’s racist policy.

Bruised but not broken, Best featured Desmond on the front page of the first issue (December 1946) of The Clarion (above) and championed her case throughout the ordeal that ended (seemingly) with Desmond’s fruitless 1947 appeal to the Supreme Court of Nova Scotia.

In 2010, Desmond was granted an unprecedented posthumous free-pardon. The document was signed by former Lt. Governor Mayann Francis, the first Black in Nova Scotia to hold the position.

“Viola will now forever be ensconced in Canadian history,” Francis said, in a phone interview. “When people see her on the ten-dollar bill I want them to remember that she was a self-made woman; a successful entrepreneur who was on a business trip when her car broke down. She was someone who’d achieved a lot and was in a position to inspire and help others become self-sufficient.”

“It’s only by a stroke of fate that I, another Black woman, signed Viola’s pardon,” Francis continued. “I am eternally connected to her and thrilled to witness the circle completed with the announcement today.”

As for Carrie Best, she published The Clarion until 1956 and later penned a popular column for the Pictou Advocate. Writing in a 1970 article, she noted that several reputed “unkempt” properties owned by Blacks in New Glasgow were poised to be snatched, à la Africville, by the government.

“While it has been denied that any commercial plans are being formulated for the area, it is a matter of record that 21¾ acres of land … has been acquired in the area by one citizen,” Best wrote. “This has caused concern among the property owners there whose taxes are paid and who have been waiting for nearly a century for sewer services.”

“We understand that the community is concerned and we are in the process of finalizing a plan to address this matter, which has been around for a long, long time in the province,” Natural Resources Minister Lloyd Hines said earlier this year.

In the meantime, it’s my hope that local print, radio, television, and digital outlets will honour the legacies of Carrie Best and Viola Desmond by hiring more journalists of colour and devoting more resources to coverage of underserved groups.

In the meantime, I’ll hold fast to Desmond’s triumph (which gives new meaning to the phrase “serving face”) by reflecting on the words of  Lucille Clifton (1936-2010)  in her poem, “Won’t You Celebrate With Me.”

won’t you celebrate with me
what i have shaped into
a kind of life? i had no model.
born in babylon
both nonwhite and woman
what did i see to be except myself?
i made it up
here on this bridge between
starshine and clay,
my one hand holding tight
my other hand; come celebrate
with me that everyday
something has tried to kill me
and has failed.

* an earlier version of this article incorrectly said that Best and her son were arrested. University of Ottawa law professor Constance Backhouse writes:

One correction on the Best story, which I think makes the story even more interesting.  She and her son were not arrested. They were ejected, but when the police officer placed his hands on Carrie Best’s arms and raised her from her seat, she and her son got up and left, vowing to sue.  It was, apparently, part of a plan to sit in the downstairs portion of the theatre, force management to eject them, and then bring a legal action.  (The law failed, again, but it was a gloriously planned campaign.)Full details of the case are described  in “I Was Unable to Identify with Topsy“: Carrie M. Best’s Struggle Against Racial Segregation in Nova Scotia, 1942” Atlantis 22:2 (Spring 1998) 16-26