A vile video taken by a guard inside a Nova Scotia jail and that was shared on social media violates a female prisoner’s privacy and makes disparaging comments about her medical condition.

The Halifax Examiner was provided the 20-second video clip by a person who captured it on the SnapChat app. The video was posted to the app either Wednesday or Thursday evening by someone known by our source to be a correctional officer.

The video shows a woman in her cell, and is captioned “Feeding this fat fucking retard ice cream at 1:30am so she’ll go back to sleep and stop crying ‘diabetic low.'”

The video appears to have been taken in the East Unit at the Central Nova Scotia Correctional Facility (the Burnside jail). The Examiner has viewed the entire video; in it, the woman is identifiable. Her clothing is of the same variety as worn by prisoners at the jail, and other women who have been jailed at the facility tell us the video was likely taken from the vantage point of “the bubble” — the area where guards sit to observe prisoners during the guards’ shifts.

To protect the privacy and identity of both the woman filmed and the person who provided the clip to the Examiner, we will not publish the entire video. However, here is a redacted still from it: 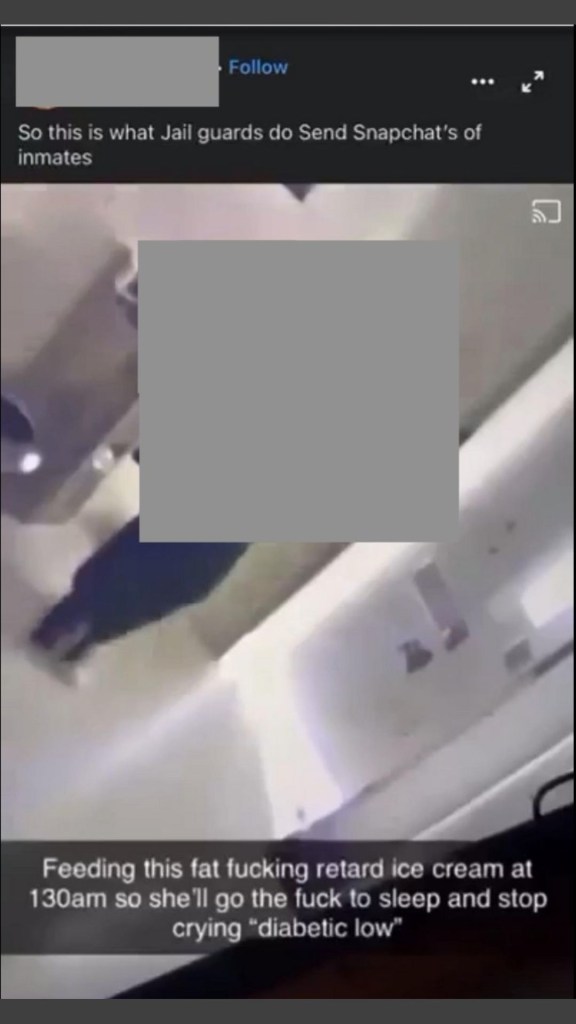 The Nova Scotia Department of Justice, which oversees the jail, has not immediately responded to a request for comment. We will update this article if and when they do.

The Department of Justice recognizes the human rights of persons in custody must be respected and protected at all times. We became aware of a video today, and we are conducting a thorough investigation. We are unable to provide further information or comment while the investigation is underway.

Bianca Mercer, an advocate for women who was featured in the documentary Conviction was formerly incarcerated at Burnside. She said the video makes her feel “sick” and “violated.”

Just the thought of them watching me on camera being strip searched and how easy it was for them to take a video of an “inmate.”

I am feeling violated, and it’s not even myself in the video that was posted. Being a former resident of CNSCF I can’t help but wonder how many other women have been exposed in such a disgusting way.

I want to see correctional staff who took the video fired. My heart breaks for this woman, she doesn’t even know this is happening to her. I just hope she knows we are advocating on her behalf out here and someone will be held accountable.

In 1994, women in Kingston Prison for Women were held down and forcibly stripped by guards. The prison initially attempted to cover up the incident, only for video to emerge months later. The strip search led to the Arbour Report by Justice Louise Arbour.

For advocates, the video from Burnside recalls many previous incidents where incarcerated women have been violated and abused. Most recently, in March, Sara Tessier launched a lawsuit alleging Correctional Services Canada staff failed to protect women in Nova Institution from sexual assault. Brian Wilson, a guard who worked at the prison, now faces 13 charges related to sexual assaults of seven women.

Dawna Ward, whose sister Ashley Smith died in Grand Valley Institution while guards stood outside her cell door and watched, told the Examiner that the video is “chilling.”

This woman is in medical distress. She is calling out for help and the guards, instead of getting her a doctor, are filming her and treating her like she’s not a human being. I can never forget how staff watched Ashley die and then covered it up for years.

Watching video of Ashley begging for help while she was strapped down, seeing so many images of the violence and abuse she suffered, this video brings that all back. Nothing has changed.

For years we have been drawing attention to the conditions in Burnside. We hear over and over about the use of segregation, people asking for medical help and never getting it, abuse from guards, terrible conditions. and so many other horrific things. When you do nothing and allow a culture of violence to grow, this is what it looks like. Guards posting a video of a woman in public without any fear of the consequences because these women are not seen as mattering.

A “diabetic low,” known medically as Diabetic hypoglycemia is a serious medical condition. Without immediate treatment, symptoms include seizures, unconsciousness, and even death. In an editorial written in 2018 during the Burnside Prison Strike, the lack of treatment for people with diabetes was highlighted:

It’s hard to even get a Tylenol, never mind medical treatment. I’ve seen people with diabetes and asthma not get the medication they need. If you don’t believe us about the conditions in here, you should believe the auditor general’s reports, or even what staff who work here have been saying.

Diabetes Canada has established guidelines on the treatment of people with diabetes in institutional settings. They emphasize:

Reports back to at least 2017 by advocates for the East Coast Prison Justice Society and the Elizabeth Fry Society show people in the facility being denied adequate diabetic care including blocking access to medical staff and placing a diabetic prisoner in solitary confinement while his blood sugars were high. People in the facility also report that pressing the medical distress button or demanding medical care are treated as being annoying or disruptive rather than as medical emergencies.

Formerly incarcerated people who have seen the video and who have knowledge of the jail say the woman in the video may be Mi’kmaq. The violation of any woman’s privacy is serious; filming an Indigenous woman in distress to degrade and humiliate her in public also furthers the colonial violence Indigenous women and girls continue to experience. Indigenous women are now over 42% of the federal prison population.

Repeated reports by people incarcerated in Burnside testify to violent conditions, abuses by guards, the near-constant state of lockdown, and the violation of rights. In recent weeks, men incarcerated in the facility report that a man with a cane was beaten by guards, and his head was slammed into the stairs.

When an institution has no accountability, when there is no meaningful oversight, and where there has been no action for years to address worsening conditions, staff can and do act with impunity. As disgusting as this video is, it is only a small piece of the terrible things that take place every day in Burnside and other provincial jails while courts, politicians, and oversight agencies refuse to do anything.

Women in Burnside deserve a full review not only of the staff who took the video, but of all the conditions that led up to guards feeling comfortable to post such dehumanizing slurs and to violate women in the facility in this way. Firing the guards is not enough: it is past time for a full public acknowledgement of the wrongdoings committed at the jail.

Nobody should accept this sickening treatment of women. This video is only the most public expression of the treatment people receive in this facility.