You are here: Home / Featured / Video shows Halifax police officer threatening Black man at gunpoint: “I will fill you full of fuckin’ lead” 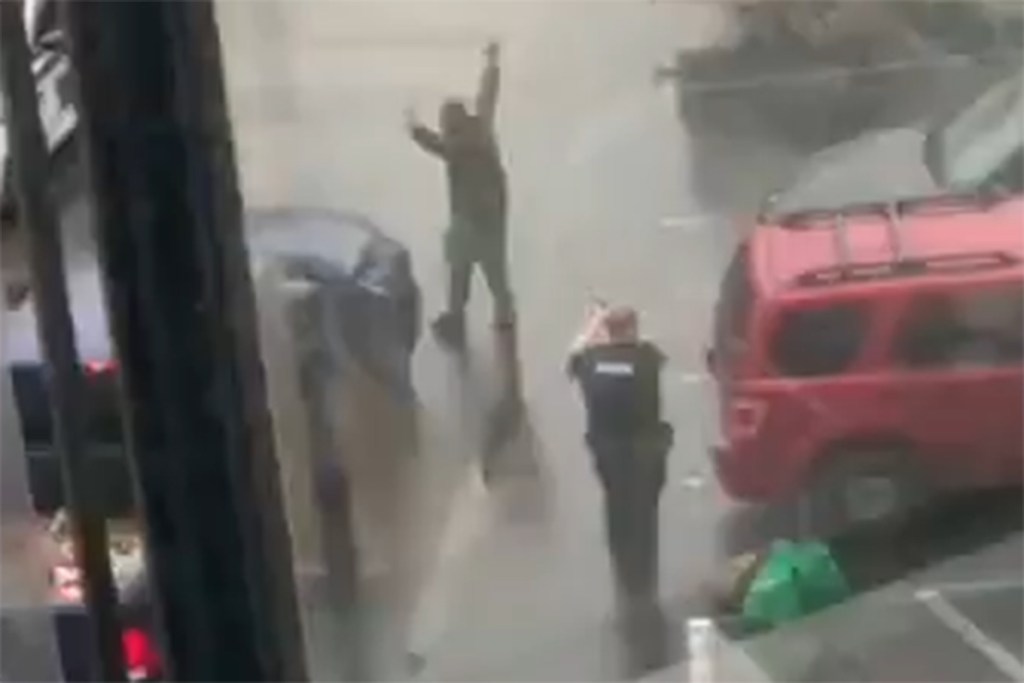 A still from the video of a Halifax Regional Police officer threatening to shoot a Black man. — DeRico Symonds/Twitter

A Halifax Regional Police officer has been placed on administrative duties after he was caught on video threatening to shoot a Black man during what the police called a weapons call in the municipality on Friday night.

“The comments that appear to have been made by our officer in the video were unacceptable,” the statement said.

“An internal investigation has been initiated into the incident. The officer involved has been placed on administrative duties, pending the conclusion of the investigation.”

DeRico Symonds shared the video on Twitter on Saturday afternoon:

What is @DanKinsellaHRP @HfxRegPolice and SIRT going to say about this? What you are watching is a white officer pointing a gun at a black male in Halifax with his hands up. The officer says “I will shoot you for a fucking laugh”. I want a dismissal or the apologies meant nothing pic.twitter.com/Oi7t509Umf

The video shows a Halifax Regional Police officer with his gun drawn and pointed at a Black man with his hands up, circling a pickup truck. The officer threatens to kill the man, but Symonds misheard what he said.

“I will fill you full of fuckin’ lead,” the officer said. “Stop fuckin’ walking.”

“You’re not allowed to fuckin’ shoot me in my back for no reason,” the man replied.

Then the man runs away. The officer starts to chase him, still pointing his gun, but he doesn’t shoot and doesn’t continue to chase the man.

Halifax Regional Police quote-tweeted Symonds, saying “We have just become aware of this video and are asking anyone with information on the date or location of this incident to please DM or call us with the details. As we look into this matter, it would be helpful to have those specifics in a timely manner.” Police Chief Dan Kinsella retweeted that tweet. 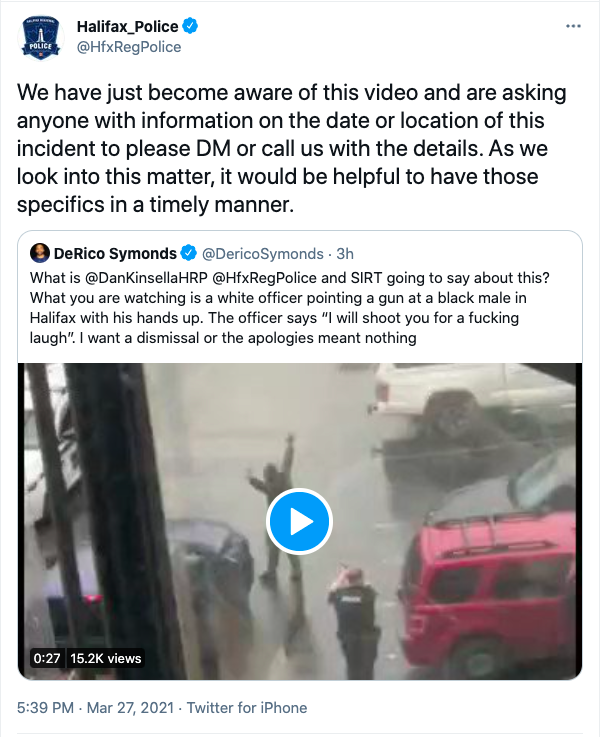 But the police either knew or should have known the exact date and location of this incident.

Halifax Regional Police sent an email release to media on Friday night at 7:50pm, with the headline “Police Investigate Weapons call and arrest a suspect with a firearm:”

At 6:00 p.m., Halifax Regional Police responded to a Weapons complaint in the 200 block of Wentworth Drive Halifax.  Multiple Patrol officers quickly secured the area taking three adult males into custody.  A forth [sic] male fled on foot.  Incidental to arrest a 30-year-old male was found to be in possession of narcotics and a firearm inside a vehicle.  One of the three males arrested did sustain minor injuries prior to police arrival, but declined medical treatment.  A Police Service Dog attempted to track the forth male but was not been able to locate the male.  There is no description to provide of the male that fled on foot at this time.  Officers have seized a vehicle for a search warrant.

Investigators with the Integrated Criminal Investigation Division and Forensic Identification Section are conducting the investigation which is in the early stages.  The 30-year-old male is expected to be facing drug and firearm related charges.

The video shows this incident.

There’s only one building in the 200 block of Wentworth Drive: 210 Wentworth. Google Streetview, though dated, shows buildings matching those in the video.

The Halifax Examiner has asked the police:

Earlier today, a video surfaced on social media platforms involving one of Halifax Regional Police officers. We have since identified the incident that took place on March 26, and can confirm that the circumstances surrounding this particular incident involved a high-risk situation involving drugs and weapons offences. The comments that appear to have been made by our officer in the video were unacceptable. An internal investigation has been initiated into the incident. The officer involved has been placed on administrative duties, pending the conclusion of the investigation.

We recognize that any such incident can be deeply damaging to police community relations. We are committed to a full investigation and ask members of the public to allow for due process to take place.