I’ve always been a soft sell on the subscription front. Shilling for subscriptions annoys me more than it annoys you, probably. But this is how we pay for the Examiner. I’m committed to paying contributors and employees decently, and that requires a steady income from subscribers.

My hope is that this year’s drive can bring in enough new subscribers to increase the scope of Examiner coverage. I have ideas about new things we can report on, and about how to improve the reporting we already do. It just requires more resources.

Also, please do me the favour of dropping by the Examiner’s Facebook page to tell us you’re coming.

So please subscribe. You can do so by clicking here. You can buy a regular subscription for just $10 a month, but for the month of November, if you buy a $100 annual subscription, we’ll throw in some free Examiner swag.

Now, back to your regularly scheduled Morning File.

As expected, the Nova Scotia’s Teachers Union has filed a challenge to Bill 75, which forces a contract on teachers.

A hearing has been scheduled for Thursday, November 23. 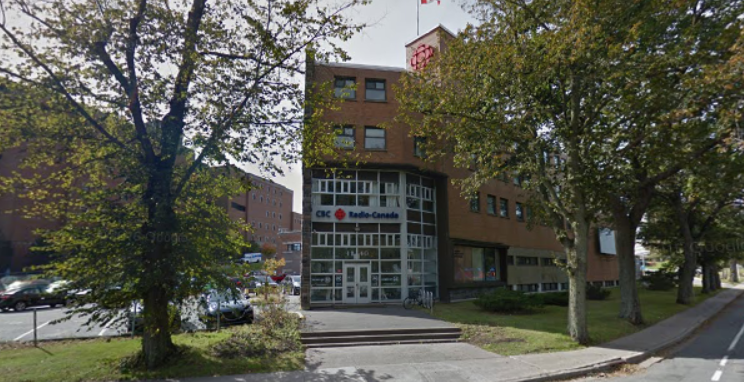 Yesterday, the province announced it is buying the CBC/Radio-Canada building on Bell Road as part of the QEII redevelopment project:

The purchase price of $4.5 million includes the building, and about two acres of land with a parking lot that has 93 spaces.

The province and Nova Scotia Health Authority will have the option to use the rest of the building to house components of the QEII redevelopment project. This may include temporary site offices and mock up areas to test the new design of work areas, like operating rooms.

The QEII redevelopment project includes the expansion and renovation of the Halifax Infirmary site of the QEII Health Sciences Centre, as well as the Dartmouth General Hospital, the Hants Community Hospital and other sites. This work will support the eventual closure of the Centennial and Victoria buildings on the Victoria General site of the QEll Health Sciences Centre in Halifax.

“There was not an incident of Halloween treat tampering in Summerside after all,” reports Eric McCarthy for the Summerside Journal Pioneer:

Wednesday afternoon police services issued a statement indicating that, after a followup investigation by its Major Crime Unit, police do not believe treats were intentionally tampered with, nor do they believe there was an attempt by anyone to harm trick-or-treaters. 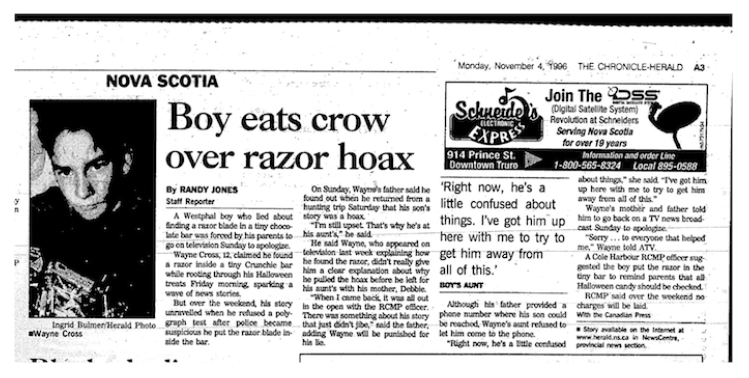 1. “Randy Jones” is the best reporter name ever.

2. Kids lie. They’re basically little lie factories, and their throats are the assembly lines for producing lies. They especially lie about tampered Halloween candy. We shouldn’t take them seriously.

3. Twelve is too old to be trick-or-treating. Get a paper route already and buy your own damn candy.

4. “The boy put the razor in the bar to remind parents that all Halloween candy should be checked” is one hell of a pant load of cop crap. I see the Fear Everything culture was alive and well in 1996. 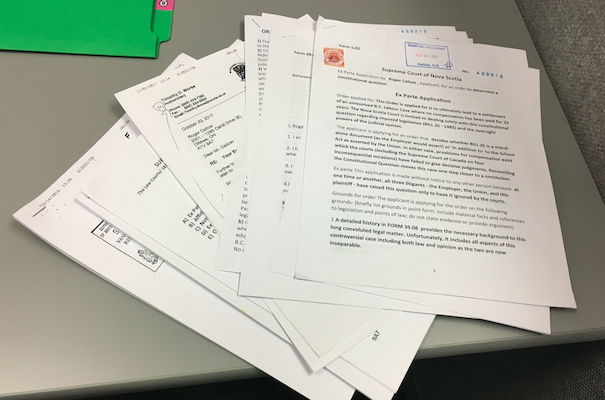 Thirty-two years ago, in 1985, West Vancouver social studies teacher Roger Callow was laid off from his unionized job. He’s been fighting for “justice” (or something) ever since.

In 2014, Andrew Duffy, then reporting for the Ottawa Citizen, recapped Callow’s journey through the courts:

In the three decades since, Callow has launched 20 legal proceedings before various tribunals, courts and appeal bodies in a determined attempt to win redress.

He has tried to personally sue two judges from the Federal Court of Canada; he has also launched multi-million dollar lawsuits against the teacher’s union and the school board.

All of the lawsuits have failed.

Both the Federal Court and the B.C. Supreme Court have declared him a vexatious litigant and have barred him from filing actions related to his lost job.

In fact, the B.C. Supreme Court has issued three separate orders since 2003 that restrict Callow’s access to that province’s court system.

In his decision issued Friday, Justice McKinnon said that Callow has insulted every judge “who has had the misfortune of ruling against him.”

“Mr. Callow has also been remarkably imaginative in engaging in offensive conduct outside the courtroom, denigrating Canada’s judiciary and legal system,” the judge said. “He has displayed insulting placards in public places and posted offensive material on his website.”

Callow’s website was taken down some time ago, but it was a doozy, with pages of unintelligible garble like this:

BY: Roger Callow ‘The Outlawed Canadian’ in an ‘Outlaw Justice System’ www.employeescasecanada.com (30 year unresolved legal case) now known judicially as ‘the cluster-fuck case’ which has been through 8 different court systems and over 30 judges. It’s Canada’s Watergate — Pulitzer Prize winning author being sought. The ‘find me a court’ plea has fallen on deaf ears due to Registry, Ministry & Court obfuscation. I feel like Ralph Nader in 1961 trying to convince the public of dangerous cars (Unsafe at any speed). Who knows, maybe recalling judges and chief judges may become standard fare in the future — just like automobiles. To be sure, the current system is not working as now the Canadian Justice System has been shattered in its entirety by this case. The current case in Federal Court (T-2360-14) alleges fraud on behalf of the Respondent Employer and Union plus the court processes over the past 30 years. It would appear that the Respondents misrepresented themselves to this petitioner as to the their authority. #550-17008208-157 currently extant in Gatineau, Quebec, will see if the French Canadian courts suffer from this ‘English disease.’ Premier P. Couillard is being kept fully informed as to court progress as well as, now, the Quebec RCMP.

Roger Callow is a litigant possessed of seemingly inexhaustible stamina. His behaviour suggests that he views the Canadian court system as something akin to a perpetual, all-day, all you can eat buffet. Having been rebuked by the courts and tribunals of British Columbia, the Federal Court of Canada and the Supreme Court of Canada, Mr. Callow has now taken aim at Ontario. Ontario lacks the jurisdiction to deal with his case. As a result, Mr. Callow’s litigation must be stopped. Now.

But there’s no stopping Roger Callow.

This week, Callow filed about a half a ream of documents with the Nova Scotia court. It’s all gobbledygook, but from the documents I learn that Callow filed a complaint with the Nova Scotia Barristers Society, but the Society “refused an examination of the fraudulent Employer’s ‘Book of Authorities.'” He therefore took the issue up with Justice Suzanne Hood, who likewise sensibly refused to deal with Callow, and so Callow is now taking aim at the judge  — “her apparently innocuous action was sufficient to show that the court for a first time was heavily biased in favour of the Employer” and so forth.

I fear our courts are about to come to a grinding halt as Callow pursues his case.

“There are two confirmed cases of mumps at Dalhousie University, and perhaps more across the Halifax area, according to officials with the school,” reports Emma Davie for the CBC:

Spokesperson Brian Leadbetter said in an email that the school sent a memo to the university community on Thursday outlining the symptoms of mumps and asking people to have up-to-date vaccinations and to consult a doctor if they notice symptoms. 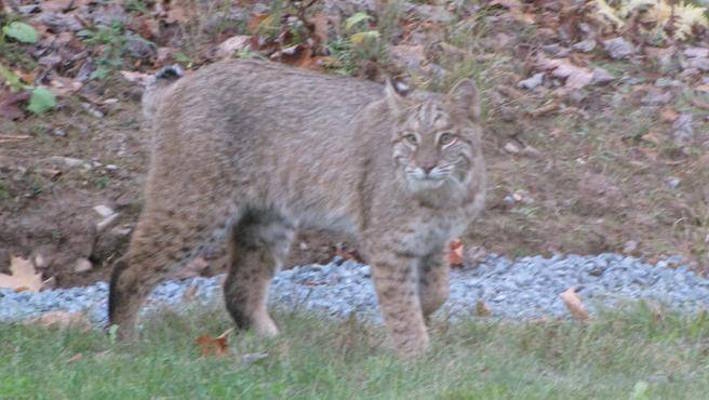 A bobcat has been checking out Angela Conrad’s bird feeder in Beaver Bank. Bobcats are pretty much everywhere in Nova Scotia, but they’re camera shy.

The front-page picture on Nov. 2, showing a man lying trapped beneath a vehicle, is completely inappropriate and in very poor taste. Why do you think the general public needs to see this scene? So we can try to guess the identity of this unfortunate individual? Please honour our need for privacy in such moments of trauma.

Hearing Loss (Friday, 3:30pm, Room C170, Collaborative Health Education Building) — Mary Beth Jennings, from Western University, will speak on “What Women and Men Want You to Hear About Working with a Hearing Loss.”

I had something clever to say, but I forgot what it was.