There’s been a nine percent drop in cruise ship passengers to Halifax this summer, which Carnival Cruise lines attributes to “fuel cost implications,” and which the CBC explains is related to environmental regulations requiring the ships to use low-sulphur fuel. This has the stink of corporate spin to it, catering to an American-style disdain of all government regulation. It’s true that cruise ships are basically floating environmental disaster scenes, but it’s not relatively small increases in the cost of fuel that are affecting the cruise industry.

Rather, fewer people are going on cruises because they simply distrust the industry. A recent Harris poll found that the “level of trust” in the cruise industry has dropped 11 percent over the past year, nearly matching the decline in ridership. People actually distrust the cruise lines more than they distrust the airlines, which is saying something.

And Carnival Lines takes the brunt of the public’s distrust, for good reason. Last year, the Carnival Triumph was left adrift in the Gulf of Mexico for five days without working toilets:

Hallways were flooded with human waste, there was no A/C or running water, and passengers were left to survive on limited food and water. The Triumph was given the nickname “poop cruise” because passengers were forced to use the bathroom in bags. 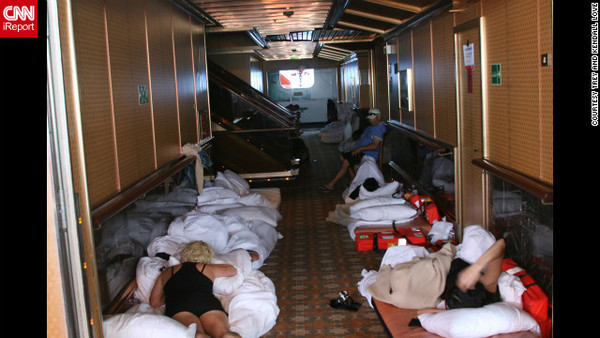 This CNN photo shows passengers lying in beds in a hallway on the Carnival Triumph because their rooms are awash with sewage. I chose this photo because the others from the collection are simply too disgusting to look at this early in the morning.

You think maybe that would affect profit margins at Carnival? Time Magazine certainly does. In an article headlined “Travelers Still Avoiding Carnival After ‘Poop Cruise,'” the magazine explains that:

In the immediate aftermath of the Triumph debacle in February, travel agents and industry analysts were saying that cruise sales remained strong, giving the impression that the whole episode would blow over and it would soon be business as normal. But it soon became apparent that the Triumph would severely hurt Carnival Cruise Lines not only because it was an especially ugly incident, but because it appeared to not be an isolated incident. A series of problems on Carnival ships—technical malfunctions, port stop cancellations, mechanical failures—followed the Triumph, apparently (and understandably) causing a falloff in bookings on Carnival cruises. The company was forced to discount cabins to fares of under $50 per day in order to boost occupancy.

As of last week, consumer confidence in Carnival still seemed to be an issue. Four-night cruises to Canada out of Boston were available starting at $159 per person, while five-night sailings began at $199—for an average of just $40 per night. That rate is for an inside cabin (the cheapest, arguable worst room on the ship), and taxes and government fees are extra. The total for the $199 rate for a couple comes to $564, which is still quite a deal.

Well, it would be quite a deal if the cruise went off without a hitch. After several high-profile problems have affected Carnival sailings in recent months, however, many travelers seem to be worried enough to steer clear of the Carnival brand, even at bargain prices.

And now Carnival is blaming dropping passenger numbers on a sensible effort to clean up shipping’s horrid environmental record instead of, ya know, making their customers live on a shit-filled ship for nearly a week.

Sigh. I know I criticize the CBC overly much, but anytime a corporate rep starts blaming environmental regulations for their declining profits, the first instinct of a reporter should be that that’s simply corporate spin and there’s some underlying true story to discover. I’m not even through my first cup of coffee this morning, and with two minutes of googling around I found the real explanation for the drop in cruise ship passengers.

We get horrible reporting when reporters can’t even begin to question the corporate line.

2. Halifax rally in solidarity with Ferguson

Here are some photos from the event. Hillary Beaumont has written an interesting article about the rally, and I’ll be editing it and publishing it just as soon as I get Morning File out. Check the home page in half an hour or so.

Mohamed Yaffa, who is a diversity and inclusion co-ordinator at Capital Health, alleges that Air Canada “subjected him to ‘enhanced security screening,’ including ‘enhanced questioning,’ on six different occasions from March to June 2010 because of his race, national or ethnic origin, colour and religion,” reports the Toronto Star.

Some idiot walked down the Mainland North Linear in camouflage and carrying pellet guns that looked like assault weapons, and got the predictable reaction. I had American friends telling me about this as the police response was unfolding, so I guess people are a bit edgy.

Marilla Stephenson reminds us that starting Saturday, just three days from now, we’ll all have to start dialling the area code on all our local phone calls. I began adding “902” to the numbers in my contact list when the change was announced last year, starting with the “A”s, the plan being to do another letter of the alphabet whenever I had spare time, and by the time the change came along I’d be prepared. I’ve made it to C.

I’m just throwing this in today because I don’t have time to write something more substantial, but here’s a blast from our recent past. I properly ridiculed the clip here.

In time for the 2017 centennial of the Explosion, the city is looking to develop a Fort Needham Park Master Plan. “Over the years the park has been developed in an ad hoc manner with no park plan to inform site planning decisions and programming rationale,” explains the tender offer. “Today we see a park with many conflicting uses, poor accessibility, lacking firm direction and maintenance issues.”

I was surprised to learn that it wasn’t until 30 years after the Explosion that the park was formally named a memorial to Explosion victims, and the Bell Tower wasn’t built until 1984, 67 years after the Explosion. The document doesn’t say, but I’m assuming the clearance through the woods, which provided a line of sight from the Bell Tower to the site of the Explosion, was also cut in the 80s. That line of sight was lost earlier this year when the Irving Shipyard parking garage was built.