You are here: Home / Featured / “Unbelievably neglectful”: RCMP raided an apartment building across from Charles P. Allen High School just as hundreds of students were leaving 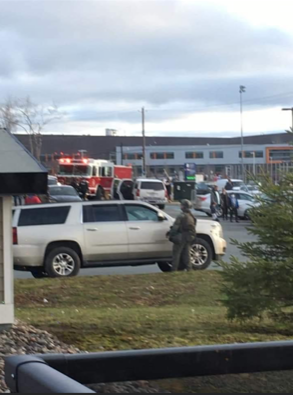 Wednesday, the RCMP raided multiple sites across the Halifax Regional Municipality, giving no warning to the public. Social media has been full of videos of high speed chases and other police operations, but it wasn’t until after 1:30pm today* that the RCMP issued a release about the operations:

Yesterday, the Nova Scotia RCMP Federal Serious and Organized Crime Section searched 13 sites across the Halifax Regional Municipality as part of a long term, ongoing investigation into organized crime and drugs in Nova Scotia. The searches will continue today.

A number of people were arrested and are in custody. No charges have been laid at this time. As a result of the searches, what is believed to be cocaine and other drugs were seized, as well as firearms.

The investigation is ongoing.

One of the raids happened in Bedford, across the street from Charles P. Allen High School, just as school was letting out for the day.

Jennifer Ramsay, the chair of the School Advisory Committee, sent me the following:

I wanted to let you know that yesterday at the time of dismissal at Charles P. Allen High School in Bedford, this was happening DIRECTLY across the street from the school. As hundreds of students flooded out of the school, weapons were out and emergency vehicles were on the scene. You can see the high school in the background of these pictures.

Students were walking by this raid at the EXACT time it was happening.

There was absolutely no notice given to the school of any type. There should have been a lockdown at the school and students should not have been allowed to leave the building at this time.

This is absolutely unbelievably neglectful of the RCMP not to have ensured the safety of the students at this school.

I called Ramsay. She told me that she has two children who are in Grade 12 at the school, and they each drove their cars past the scene. Ramsay said a school bus driver passed the scene as well, and notified the school principal, who was completely unaware of the situation.

“And there were hundreds of students walking out of school at that moment,” said Ramsay. “There were guns drawn, firefighters present. It was obvious they had no idea what could’ve happened.”

I asked the RCMP for comment on the situation at the high school, and received this response back from Public Information Officer Lisa Croteau:

Extensive planning went into preparing for this operation and ensuring public and officer safety.

Anita Kirkbride was at the school at the time of the raid to pick up her daughter and take her to piano lessons at a nearby apartment building.

“I was in the teacher lot,” she told me, and we pulled out on to the road. Just then, a fire truck came in and we had pull over to let it pass. It’s a very narrow road.”

Kirkbride said there were teachers trying to hold students back. “They said, ‘we don’t know what’s going on, but don’t go over there.’ But there was nothing they could really do, so the kids went anyway.”

“There were lots of people in the parking lot [of the building being raided],” she said. Young families, teenagers. It looked like when there’s a fire drill; I didn’t know what was going on.”

She said hundreds of students were leaving the school, including a large number who walk home. “There are no crosswalks on that street, so they just cross anywhere, probably five or 10 different places.” Some students park on the street, and were walking to their cars.

Now that she knows what was going on, she’s disturbed. “There should have been a hold and secure,” she said.

Doug Hadley, spokesperson with the Halifax Regional Centre for Education, confirms that the school was not forewarned about the nearby police operation.

“This is not typical,” said Hadley in an interview. “We typically have good communications with both the Halifax Regional Police and the RCMP. When they have operations near a school, they let us know.”

Hadley said it’s up to the school to decide how to react, and that can range from a “hold and secure” — where students can only leave when parents arrive to pick them up — to a complete lockdown.

In this case, however, the principal at Charles P. Allen only learned of the nearby police operation after school had been dismissed, and even then, the only contact with the RCMP was via a voicemail left with the principal. No RCMP officer came to the school.

Hadley said because the school is in an area patrolled by the Halifax Regional Police, the school contacted that agency. But, “they didn’t know, or at least the officer who answered the phone didn’t know anything about what was going on.”

* the release was issued after this article was originally published; the article has been updated to include it.