The Liberal government is considering privatizing Service Nova Scotia. This is a horrible idea. Protecting good government jobs aside, privatization of government data collections elsewhere has led to nickel-and-diming the citizenry to death, and prevents people from easily accessing the information required for a functioning free society.

For example, to get basic company information through the Registry of Joint Stock Companies in British Columbia requires a $10 charge. A few months ago this fee effectively barred me from doing some research for an article I was working on, as I needed access to information about a few dozen companies. This is the kind of search I do pretty much every day here in Nova Scotia, where the information is provided for free on a government-run website.

But it’s not just reporters who need such access — consumers, property owners, and others regularly require access to government data sets in order to protect themselves from invasive or cheating companies.

I’m sure the rich and powerful would like nothing more than to raise a financial barrier to citizens having access to information about corporations, but that’s no way to run a democracy.

Besides, do you trust Borg, Inc. to safeguard the personal information collected for drivers licences, birth certificates, etc?

The New Brunswick Energy and Utilities Board is investigating “Irving Oil’s heating oil billing practices following CBC reports of two customers being charged more than provincial maximum prices a combined 40 times since 2011,” reports the CBC. The price of heating oil is regulated in New Brunswick, just as gasoline prices are regulated in Nova Scotia.

Both of the customers have said Irving Oil representatives told them they held commercial accounts and were therefore not entitled to the protection of provincial pricing laws.

[Heather Black, a lawyer with the province’s attorney general’s office] says that is not how price regulation works in New Brunswick.

The key issue, she said, will be whether the overbilling of clients was on purpose and widespread, or isolated computer or clerical errors.

“If I have a plumbing business and I’m going to my job site, I’m not asked by the gasoline station attendant whether I’m a commercial customer, or residential customer and there are no other distinctions in the [Petroleum Products Pricing Act] that would support an interpretation like that, so it is quite concerning,” said Black. 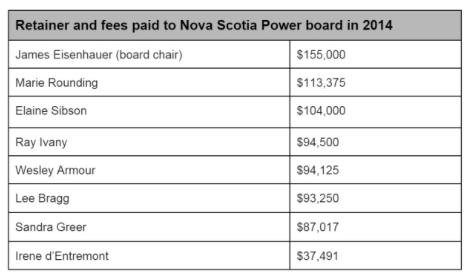 A reader points me to an interesting bit in a chart attached to a CBC story last week: Ray Ivany, the primary author of the famed “Ivany Report,” is a member of the corporate board of directors at Nova Scotia Power and was paid $94,500 in that capacity in 2014. The Ivany Report was published in February 2014. Ivany was appointed to the NSP board in September 2011. 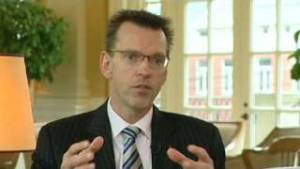 I got a raise this big, says Ray Ivany.

There’s nothing illegal about Ivany being on the NSP board, but the optics are all wrong. For most people trying to survive in this province, the single largest aspect of their lives that demonstrates the dysfunctional nature of Nova Scotia is their interaction with Nova Scotia Power — struggling to pay the highest power rates in the country, dealing with the ever-increasing number of power outages, powerlessly confronting NSP’s outrageous executive and board compensation, and suffering through the indignity of facing corporate branding for a monopoly at their local recreation facility.

And now the company, with Ivany at the board table, twists the knife:

Directors receive a fee of $1,750 to attend meetings in person and $1,250 to participate by telephone.

Most directors averaged about $94,000 in fees and retainers, which does not include stock options.

Oh, and you average Nova Scotians? Ivany just wrote a report telling you that the problem in Nova Scotia is your poor attitude.

Calgary Mayor Naheed Nenshi gave the Carmichael lecture last night. Moira Donovan will have a full report on the talk later today, but I’ll just say I was impressed. Nenshi’s something of a prophet, and I mean that in the best way — we need prophets, and Nenshi’s message is a good one about inclusion (“It doesn’t matter what you look like, who you worship, who you love, and yes, ladies and gentlemen, or what you wear on your head,” said Nenshi), addressing poverty, and making life better for regular people. A few highlights for me: He condemned Stephen Harper for killing the long form census, supports a guaranteed income, and (surprisingly, to me) took strong political stands.

Environment Canada, looking like the voice of restraint in a sea of sky-is-falling forecasts, is predicting “just” 15 centimetres of snow Sunday. But, sorry to break it to you, there’s a second storm behind this one, which might bring still more snow on Tuesday. 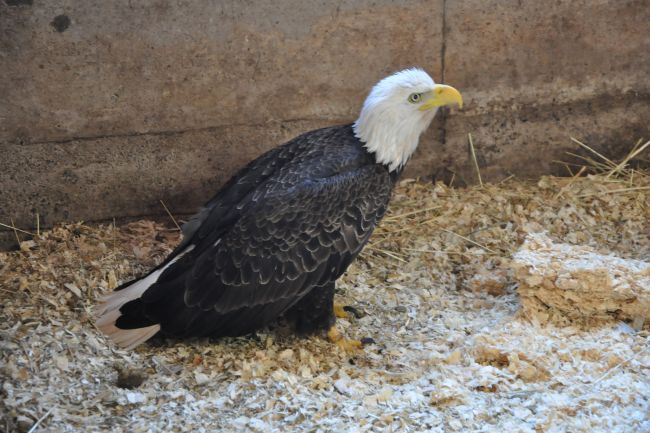 While riding his snowmobile on Starr’s Beach, Andrew Johnson discovered an injured bald eagle, which he has named Willow. He brought it home and then to the Cobequid Wildlife Rehabilitation Centre, where it is recovering.

One notable point in Ashley Thompson’s article about the rescue:

The CWRC provides rehabilitation and recovery services for wild birds and small mammals.

“Most of what we get is because of human intervention… and I feel bad about that and would like to turn it around if I can,” said [veterinarian Helene] Van Doninck.

The CWRC specializes in birds and already had four bald eagles in its care when Willow arrived.

“Primarily, they are hit by cars,” said Van Doninck, noting that scavengers are often attracted to road kill.

Lead poisoning, Van Doninck added, occurs when eagles eat the remains of animals that hunters left for wildlife to consume. She said the hunters are generally trying to help wildlife by leaving scraps behind, but it can actually be lethal for scavengers to consume the remains of an animal killed with lead-based ammunition.

“Because lead is a soft metal, when it hits the body is breaks up into hundreds of pieces and a lot of those are in the gut of an animal.”

Willow, however, was probably injured in a fight with another bald eagle.

See, it’s a problem of scale. International Women’s Day is big. Really big — a century-old movement. And that’s nice, as a concept. It works beautifully for rallies and conferences and educational events. It’s a great hook for concerts and fundraisers. I know lots of good, smart women who toil at making March 8 matter, and most are year-round activists on top of that.

But sexism? You can’t box it up. You can’t make a website for it. You can’t package it and explain it to people. Sexism lurks and creeps and seeps into everything.

Well, it looks like the gas companies, and the low-handed actions of government, are back at playing the gas yo-yo game with gas prices again. These band of thieves just can’t stand to see the poor old consumers get a break from the ever increasing gas prices. What a rip off, this is nothing more than a money grab and a slap in the face to every taxpayer in the country.

The oil prices keep declining, but to everyone’s disappointment, the gas prices keep hurling higher. These greedy profit seekers keep reaching deeper and deeper in our pockets to take the last few dollars that we may have. Corrupted governments, crooked politicians and high levels of corporate management are getting richer, along with their rich investment buddies, on the backs of the country’s taxpayers and everyday consumers.

I am sure that most taxpayers don’t mind paying their fair share of tax dollars, but the situation has gone to far. Most people are now living in a world of poverty, homelessness, joblessness and not being able to cope with today’s living conditions. In all, the hardships that people are experiencing in today’s world, large profits, and over-government spending, seems to be the only thing that matters. Taxpayers are sick and tired at being targeted by freeloading politicians, as to being the main source for paying for political blunders, made by incompetent government parties. The taxpayers of this country have been victims of a senate scandal, where senators have dishonestly spent large amounts of tax payers dollars, politicians cheating on their expense accounts involving global and around the world travel and tax dollars being squandered and wasted by the stupidity of non caring dishonest politicians. 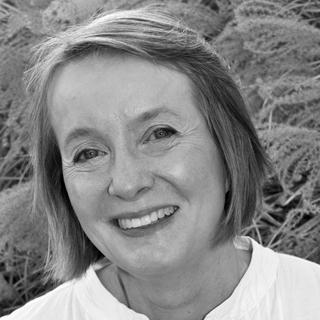 Thesis defence, Applied Science (Friday, 1pm, SB159)—MSc student Krystal Lariviere will defend her thesis, “Mock jurors made mistakes assigning liability even though the standard of proof and the evidence were clear and precise: Mock jurors set aside the civil standard.”

On Becoming a Mother and Disengaging from Injection Drug Use (Friday, 12:10pm, Room 104, Weldon Law Building)—Fiona Martin, from the Dalhousie Department of Sociology and Social Anthropology, will speak.

Meanwhile, in Anchorage, Alaska there is no snow, so they had to truck some in for the start of the annual Iditarod Trail Sled Dog Race. 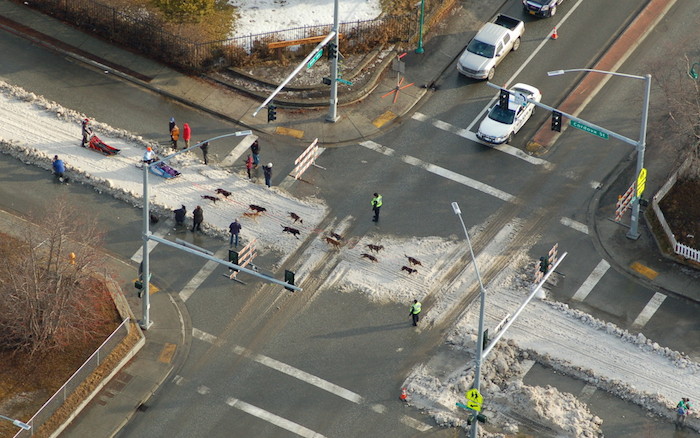 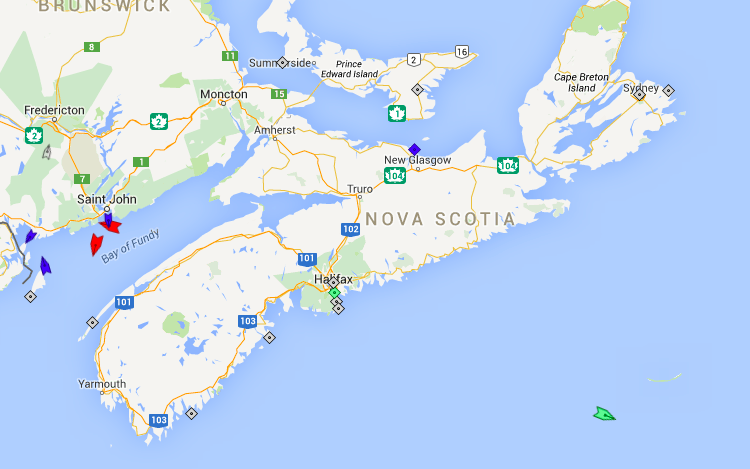