You are here: Home / Commentary / Photos of Trudeau in Blackface don’t surprise Black people; we live this racist reality

The closest I’ve been to Justin Trudeau was in January, 2017, when I stood beside former Somali child refugee Abdoul Abdi’s sister Fatouma as she asked the Prime Minister if he would deport his own children. 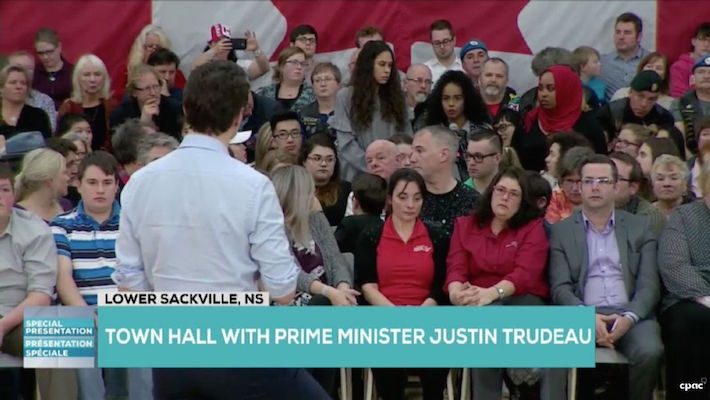 Fatouma was seven months pregnant, and was supposed to be on bed rest. When she heard Trudeau would be at a town hall in Lower Sackville, she insisted on showing up to confront him, to try to save her brother.

That week, and in the weeks after, Abdoul’s story became national news, pushed into the headlines and onto the topics trending on Twitter by Black Canada. For Black Canadians, Abdoul’s story represented the ways anti-Blackness intersects across all systems: the child welfare system that seized him and his sister from his family and neglected to seek their citizenship; the education system where he achieved only a grade six education; the youth justice system that criminalizes Black children in care; the criminal justice system where these youth cross over once they age out; and the immigration system that deports Black men like Abdoul once Canada labels them as a danger and a problem to be thrown away.

When The National interviewed Abdoul, there was no mention of anti-Blackness, or of the mass movement of Black Canadians that publicized the story in the first place.

In February of 2019, Trudeau came to the Black Cultural Centre to apologize to Black youth racially profiled on Parliament Hill and to meet with the African Nova Scotian community. That time I was not inside, as I was not invited. Instead, I stood outside with Lynn Jones protesting the racism in Nova Scotia that was called “deplorable” in a 2017 United Nations report, and that continues to flourish under Trudeau.

After Trudeau’s apology, where he ackowledged that anti-Blackness exists in Canada, my phone blew up with texts from Black friends across Canada. “Apology not accepted,” they sent.

Lynn Jones, recovering from surgery, stood in a blizzard because if she didn’t, who would speak about living and dying with anti-Blackness under Trudeau?

In February 2017, Yusra Khogali, at the time a member of Black Lives Matter Toronto, declared at a protest against Islamophobia that Trudeau is a white supremacist. In the days following, white commentators and media scrambled to condemn her statement, to whip up outrage against her, and to demand her removal from the leadership of BLM. Trudeau, they declared, was the opposite of a white supremacist, and to even accuse him of racism was absurd.

And now, here we are in the election campaign of 2019, with Trudeau unmasked as having repeatedly worn Blackface. Suddenly, the same media outlets that denounced Khogali are discussing whether Trudeau is racist, and profess themselves shocked at the images of minstrel show Trudeau.

This could only be surprising to those who have deliberately ignored, mocked, and harassed Black people who have repeatedly fought to amplify these issues.

In January of 2019, Peter MacKinnon began serving as the interim president of Dalhousie University. The problem was that his book, University Commons Divided: Exploring Debate & Dissent on Campus, offered a defence of Blackface. MacKinnon was protested by students at his inauguration; university officials responded by saying the protestors didn’t understand MacKinnon’s argument, and that they were overreacting. I spent that week talking to Black scholars across Canada for the article I wrote, all of whom unequivocally condemned Blackface and detailed its history of drawing upon enslavement’s most grotesque, dehumanizing, and degrading stereotypes of Black people.

It was exhausting then, at the beginning of 2019, to have to explain why Blackface is damaging to Black people, why it is not acceptable, and why it is not “just a costume.” Yet here we all are, nine months later, with excavated images of the Prime Minister of Canada in an afro wig smeared in Black makeup, having the same discussions explaining these histories, reminding people that Blackface minstrel shows existed in Canada well into the 1950s, and facing questions about whether this is truly racist, whether we should accept his apology, and how soon we should move on.

And once again, we are told that at least it’s good that Canada is having these “important conversations,” as if we Black people haven’t always been speaking and explaining and arguing over and over again. What is meant is that race is only important when white people choose to notice or talk about it. And it will always stop at just talking.

In 1918, in the March/April issue of the Acadian Atheneum, we come across an account of a “nigger minstrel show” at Acadia University, featuring “23 coons.” The event was apparently “the best show of its kind put on here for some time.” That it was the best, of course, indicates that it was not the only, and that these shows were a common occurrence.

This was only a couple of years, as Greg Marquis recounts, after the the Klan-glorifying film Birth of a Nation was screening to packed houses in Canada. Screenings were only blocked in Halifax because Black people were needed for the war effort: someone had to dig the toilets, and whipping up fear and hatred towards Black people was counterproductive. 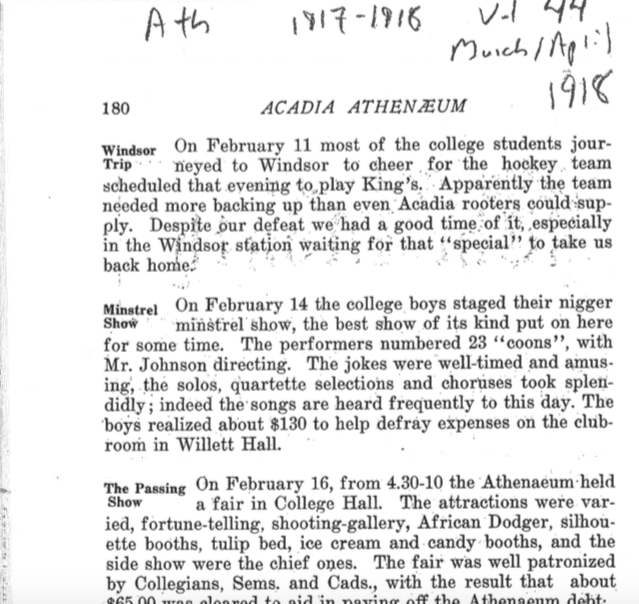 Image of the Acadia Atheneum. Discovered in the archives by Dr. Claudine Bonner.

It is these histories, and the charged images of Black people as criminal and beastly that accompany them, that form our insistence on the harm of Blackface, and its impact upon Black people today. That 80 years after the show described in the Atheneum, Trudeau appeared in a yearbook smeared in brown makeup enacting the “Arabian Nights” is surprising only in a country that erases and evacuates histories of racism, to be shocked anew every time that the ugliness — and the reality — of racism is revealed, again and again and again.

It says something about the era we live in that discussion inevitably focuses on racism as an issue of public relations. I am reminded of the police board meeting I attended after the Wortley report confirming once and for all systemic racial profiling by the Halifax police was released. There was a discussion at the meeting about people not filing complaints against the police. This was, it was decided, a communications problem, and a strategy should immediately be developed to improve communication around the correct process to lay a complaint. This is the epitome of our Age of Bureaucracy, where the issue of people being brutalized and violated by police morphs into a discussion of how to manage the strategic communications plan.

And so we are asked if Blackface pictures hurt Trudeau’s brand, as though that is the central issue. Reporters who call for my opinion keep asking me if these images disappoint me, if I’m disillusioned by Trudeau. It’s as though the fight against the deportation of Abdoul Abdi, or the more recent struggle in August to save Abdilahi Elmi never existed. As though Haitians are not living in tents at the Quebec border, and as though African refugees are not struggling chest deep in snow across the border in Manitoba and losing their limbs to frostbite.

Anti-Blackness did not emerge from Trudeau or his government magically at the moment media revealed photos and videos of him in Blackface. Black people suddenly find ourselves in demand for news programs, interviews and panels, while our opinion is not sought on health care, the economy, or climate change. Here, finally, is an issue we can speak on — if only to be met with questions about whether we should move on, how serious this really is, and how sincere Trudeau seems to be.

This week, the news is filled with discussions of anti-Blackness, but that conversation is still driven by white people. We are “allowed” to discuss race right now, until we return to being told that we should stop injecting race into the conversation on all other issues. And when the furor over Trudeau’s Blackface photos dies down, to be referred to as an “embarrassing incident” or “controversial,” Black people like Abdilahi Elmi will still be facing deportation. Muslim Canadians will still be on the no-fly list whether people forgive Trudeau or not. White nationalist editorials will still be commissioned by major newspapers under the guise of “debate,” and immigration will still be referred to as a “crisis.”

Trudeau may be feeling the heat now, but no matter how many afro wigs he wears, he has never had to face being stopped by the police for the colour of his skin. He does not face questions about whether his turban makes him unelectable. No one doubts his right to be in Canada or wonders if he’s a real Canadian. And when other news from the campaign inevitably pushes Blackface from the front pages, we will continue to live in our skins with all the consequences and harms and traumas it holds for us in this country.