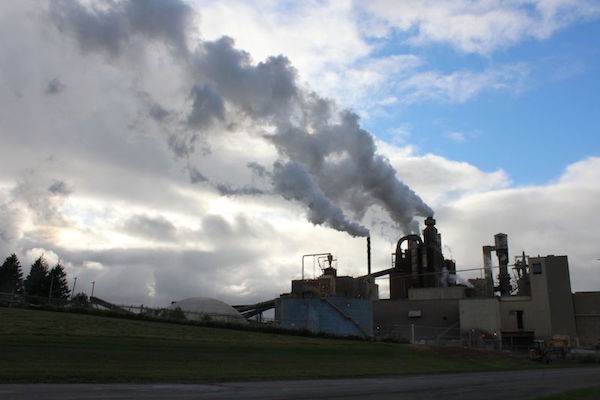 “A setback for the ‘No Pipe’ movement and a victory for the Pictou County pulp mill yesterday,” reports Jennifer Henderson. “Nova Scotia Supreme Court judge Denise Boudreau granted Northern Pulp a temporary injunction to prevent local fishermen from continuing with blockades she ruled interfered with a vessel hired by the mill to survey the bottom of Pictou Harbour and Northumberland Strait.”

“Nova Scotia’s transportation minister says transparency can be a difficult balance when it comes to the ‘eternal struggle that government has around the proprietary information’ of private businesses,” reports Michael Gorman for the CBC:

Lloyd Hines made the comments a day after Catherine Tully, the province’s privacy commissioner, released a report calling on his department to make public the management fee and potential bonuses paid to Bay Ferries for operating the CAT ferry service between Yarmouth, N.S., and Maine.

“We end up getting beat up over it all the time, but we do have to respect the fact that these are agreements that are made with people that we do business with and, in the world of business, information is very secretive,” said Hines, who noted the formula for Coca-Cola has never been revealed.

Any semi-literate teenager in a bong circle knows the difference between the Nova Scotia government and Coca-Cola: one of them is owned by the citizenry, and the other isn’t.

Even with that, because it is a publicly traded company, we know the salaries and benefits paid to Coca-Cola executives, and the performance bonuses they are paid — that is, roughly, the information the Nova Scotia government is keeping secret vis-à-vis its payments to Bay Ferries. For example, according to the company’s proxy statement, Coca-Cola president and CEO James Quincey was paid a base salary of $1.17 million in 2017 (he was promoted from CFO mid-year), and had stock awards of about $6 million. He was additionally paid a cash bonus of $2.36 million for meeting incentive targets. On top of all that, he used the company’s private jet to the tune of $107,000, and to grease his move from the UK accounting office to the Atlanta, Georgia corporate headquarters, he was paid $389,322 as an “international service program benefit” (“The purpose of the programs is to make sure that when the Company requests that an employee move outside his or her home country, economic considerations do not play a role,” explains the proxy. “This helps the Company quickly meet its business needs around the world and develop its employees.”) Remarkably, unlike his predecessor, Muhtar Kent, Quincey did not use a car and driver. (Kent used a car and driver valued at $150,000 while in Britain, apparently because he couldn’t drive on the left side of the road. Quincey made the reverse transition without the help of a driver; perhaps he walks to work.)

This morning, reader Tom Servaes draws my attention to “Mythbusting Confidentiality in Public Contracting,” a report published by the Open Contracting Partnership, an international body sponsored initially by the The World Bank Group, so hardly a lefty operation.

Relevant to Nova Scotia’s contract with Bay Ferries is Myth #3: There is commercially sensitive information in contracting documents, so they can’t be disclosed.

That last point should be underscored. If Nova Scotia simply made every government contract public, as is already the case in much of the rest of the world, absolutely nothing untoward would happen. Companies would  incorporate public knowledge of the contracts into their planning and operations, the public would be better informed, there’d be a check on corruption, and prices would come down.

So why don’t we make government contracts public by default? Because secrecy provides cover for politicians and bureaucrats making bad decisions. 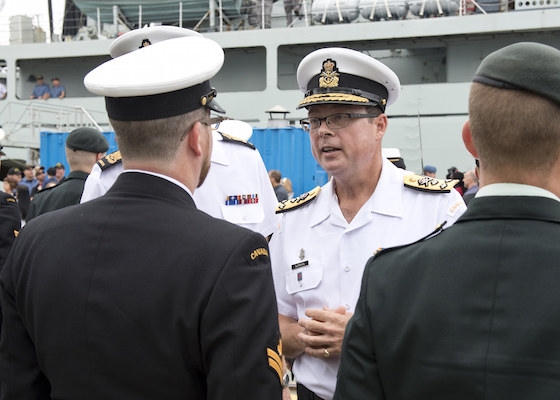 “A pre-trial hearing for a top Canadian Navy officer accused of leaking government secrets heard dramatic claims today about possible manipulation of the access-to-information system within the Department of National Defence,” reports Tom Parry for the CBC:

The legal team representing Vice-Admiral Mark Norman today called two surprise witnesses. The first, a military member whose name is protected by a publication ban — due to fears that the testimony could lead to reprisals in the workplace — told court about an alleged scheme within National Defence to avoid using Norman’s name in internal correspondence.

The witness told court about work on one specific request for documents related to Norman submitted to the department in 2017. When it turned up no records, the witness told court, a superior smiled and remarked, “Don’t worry, this isn’t our first rodeo. We made sure to never use his name.” 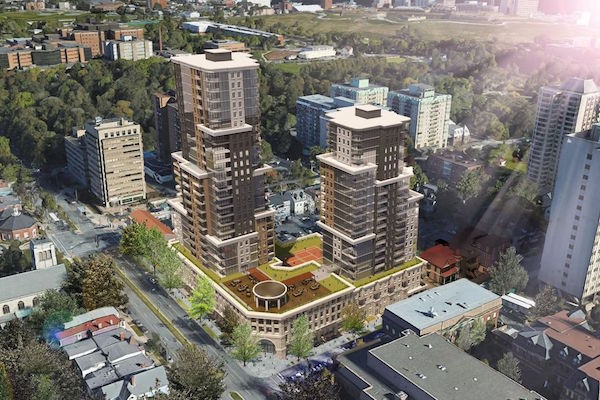 This pretty picture shows the Rouvalis family’s proposed development with parking meter- and telephone wire-free streets, a carless Robie Street, and, notably, the absence of the gigantic development right next door.

“A Potemkin Village is precisely what Halifax is in the process of creating in the block bounded by Spring Garden Road, Carlton Street, College Street and Robie Street,” writes Larry Haiven:

What is the “undesirable fact or condition” that is being hidden there? Believe it or not, what the developers and city officials are trying to “hide” in plain sight is a massive development, on a single city block, of four towers of 30, 26, 20 and 16 storeys.

The block is presently zoned for 35, 40 and 50 feet to protect its heritage character. To accommodate the towers, the two developers involved (Louie Lawen and the Rouvalis family) are proposing to demolish thirteen older buildings, including one of Halifax’s oldest small apartment buildings, the Edwardian-era Coburg. The height and massing of this project will well nigh extinguish a fine and beautiful historic neighbourhood, including the former home of Margaret Marshall Saunders, one of Canada’s top-selling authors ever.

The development will also help set the framing discourse for future despoilations of historic Halifax.

And what is the “impressive façade or show” that will hide this monstrosity? The developers are offering to do some renovations on several already-heritage-designated houses on Carlton Street, presumably to show civic-mindedness but really to make their bolder plans more palatable. Only to put the largest single massing of buildings in Halifax right into the backyard of these houses.

Of course, the Potemkin front could never hide the eyesore in the backyard. But City staff have been demanding — wait for it — that we actually pretend the towers will not exist.

At their December 12 meeting, members of the Heritage Advisory Committee were instructed to perform the mental gymnastics. Chief HRM Heritage Planner Aaron Murnaghan is reported by allnovascotia.com to have urged the committee members to consider only the Potemkin Village and ignore the four towers. According to this report, he actually said “Imagine nothing is happening next to the properties.” 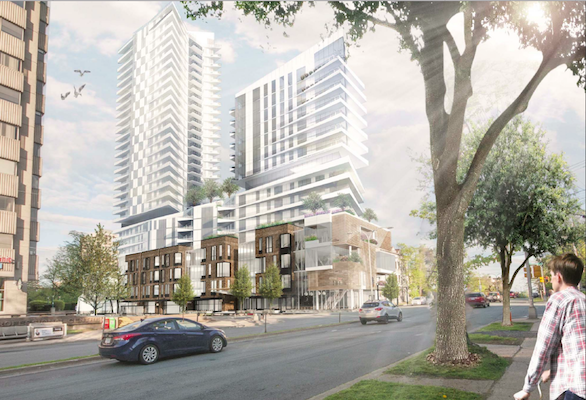 A kid on a bicycle stops to watch as a flock of giant monster birds attack a 30-storey building proposed to be built on Spring Garden Road.

I’ve written about the proposed developments before (see “1,500 people will soon be crammed into one block on Robie Street”), and about planners’ and politicians’ refusal to see the two developments as one massive development:

Dexel Developments [is proposing] two towers — 30 and 16 storeys — at the corner of Spring Garden Road and Robie Street, stretching to Carlton Street.

As I pointed out last week, this comes just as the Rouvalis family is applying to build two more towers — one 26 storeys, the other 20 storeys —  on the back side of the same block, at the northeast corner of Robie and College Streets, stretching back to Carlton Street.

Besides all the other faults we’ve come to expect — perpetual sunny days, see-through people, the lack of brown people, the sudden disappearance of parking meters and traffic, etc. — the pretty pictures submitted by each applicant don’t include the existence of the other’s buildings.

The Dexel proposal includes the two towers on an eight-storey shared base. The ground floor is 21,000 square feet of retail, the next three floors are 60,000 square feet of office space, and everything above is 250 residential units. There’s an underground parking garage for 361 cars.

As with the Rouvalis proposal, the Dexel proposal includes registered heritage properties, in this case four houses on Carlton Street. Two of those houses are slated for “substantial alteration.”

Haiven’s right to bring up the issue of heritage buildings, but even without that consideration we have two development proposals that collectively are of unprecedented density and height for Halifax. They make the much-contested Willow Tree development look minuscule in comparison. Development of the Potemkinville (sure, let’s call it that) will be a construction and traffic nightmare for years on end — if you think this summer’s repaving job at Spring Garden Road and Robie Street was a mess, just wait. (And shouldn’t that repaving job have waited until after the whole area is torn up by the mega-highrise construction?)

It’s odd that no one much is talking about this. 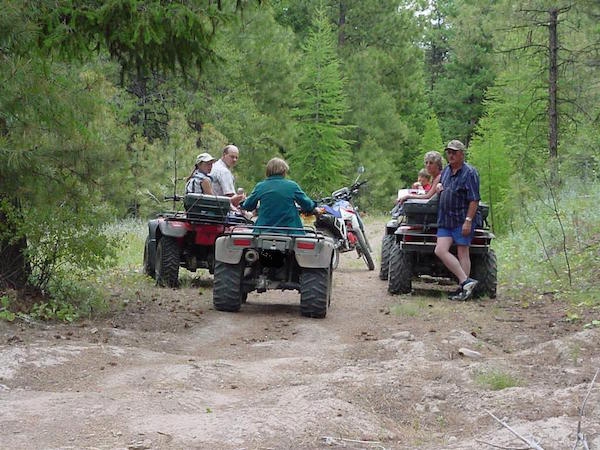 Active Transportation Advisory Committee (Thursday, 4pm, City Hall) — the Halifax Regional Trails Association (HRTA) is making a presentation to the committee, and making its case against Off-Highway Vehicles (OHVs), which seems to be what we used to call ATVs.

HRTA represents 23 different trail groups across the HRM. Nearly all of the groups are opposed to OHVs on the trails, says HRTA, noting that “[the] Shearwater Flyer [trail] is part of the Cole harbour Parks and Trails Association’s (CHPTA) trail system, and it is currently motorized. The board and membership of CHPTA have recently voted unanimously to apply to Lands and Forestry to remove the motorized use.” I believe the only other trail where OHVs are allowed is the BLT trail.

The problem, says HRTA, is that “Motorized drivers are not significantly impacted by NON motorized trail users ; therefore they are happy to promote shared use. The opposite is true for NON motorized users. The impact is significantly negative for them. It is not a win-win situation.” Moreover, claims HRTA, “past community consultation methods have led to false readings of community support, leading to communities having motorized use on their trails when the majority of the community surveyed didn’t really want it. Registered motorized users represent roughly 3 to 4% of the population. Most surveys indicate 70% want non motorized.”

“It’s time to make a solid declaration in support of human-powered trails based on facts and years of experience under the ‘shared use’ model,” concludes HRTA. “There are scientific articles/studies and other evidence that make it clear that shared use does not work in populated areas.”

Public Accounts (Wednesday, 9am, Province House) — more questioning on the October 2018 Report of the Auditor General.

I have to use Skype today. I’ve Skyped maybe four times over the past decade, and each time there’s a frantic relearning process as I chase down a long-forgotten user name and refamilarize myself with the process. I realize many people use Skype regularly and it’s no big deal for them, but for me it’s a gigantic hassle. (But worth having the conversation, in this case.)

Hey, look at what I got: 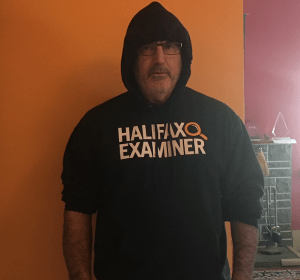