You are here: Home / COVID / “Totally disgusting”: Premier Tim Houston condemns comments from pastor saying God “wanted” the current outbreak that started at his church and has killed 3 people 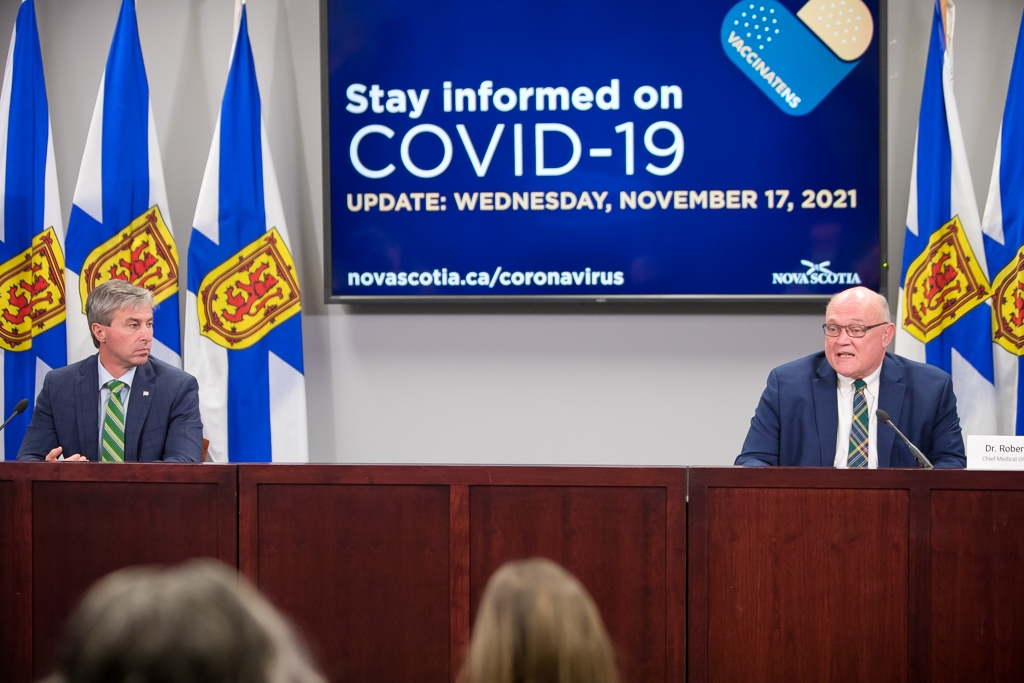 Robert Smith, the pastor of the Gospel Light Baptist Church in Amherst and host of the “Bordertown Campmeeting” held from October 25-29,, has been fined for “a gathering which contravened the COVID-19 order under the Health Protection Act.”

The current COVID outbreak in the Amherst area and in the Annapolis Valley started at the camp meeting, where about 100 people gathered, many of them unvaccinated and not wearing masks. The outbreak has led directly to three deaths — two residents of the East Cumberland Lodge long-term care home in Pugwash, and one resident of Rupert House, a home for people with intellectual disabilities.

Yesterday, CBC reporter Taryn Grant reported that Smith said from the pulpit that the outbreak that started at the camp meeting was “unfortunate,” but  all part of God’s plan:

“I followed what God wanted us to do,” Smith said from the pulpit. “We had a great week of meetings … a young lady got saved.”

Several times throughout his 30-minute sermon, Smith said people are trying to shame his community, but he urged his parishioners to resist internalizing the feeling, saying it’s Satan, “trying to drag us down.”

“The Bible says ‘all things work together for good.’ Hey, some of the things, people that we know that’s in hospitals and stuff, that still applies, too,” he said.

“Like many of you, I am absolutely appalled at the comments of some of those who were allegedly involved in organizing this gathering,” said Houston. “The comments downplaying the seriousness of what’s happening. The comments minimizing the loss of life are completely unacceptable and totally disgusting. Lives were lost. I can’t imagine that at this stage in the pandemic, with the devastation we’ve seen to families and communities that we have people who believe that they can pick and choose which rules they follow.”

The fine charge against Smith was laid by the provincial Department of Environment and Climate Change, and not by the Amherst Police Department, which has been investigating the camp meeting. I asked Houston if the province took action because the local police did not.

“I can’t understand honestly why the police haven’t advanced their investigation or taken up on that file,” replied Houston. “But yeah, to answer your question; yes, the compliance and enforcement part group of Department Environment is kind of a backstop to to the to the police the police should be doing. They’re doing their job, they should be enforcing the laws… I will say that I certainly put a lot of pressure on them to make sure that that investigation happened.”

Houston additionally said the province is investigating laying more charges, and he’d like to a review to see if the charges are sufficiently high.

Chief Medical Officer of Health echoed Houston’s condemnation of the camp meeting. “I am both angry and frustrated,” said Strang. “People chose not to get vaccinated. They gathered with both vaccinated and unvaccinated people against existing rules, and these choices have had significant impacts upon others. I understand that no one intended for this to happen, but if we give COVID-19 a chance to spread it will and as we know, it can be deadly. To those who say that are proof of vaccination protocol and other public health measures infringe on your freedoms, I’d say that freedoms come with responsibilities. Your personal freedom has well-established ethical and legal boundaries when it creates significant risks to others in a pandemic.”

Much of the spirited press conference saw Houston and Strang fending off suggestions that the rules around faith-based gatherings are not sufficient, but Strang insisted that the three recent outbreaks among religious groups — Mennonites in the Northern and Western zones a few weeks ago, Muslims in the HRM more recently, and the camp meeting fallout — are not indicative of such a problem.

“We had this event [the camp meeting], we’re talking about clearly noncompliance and that spread to a number of other churches and was spread within those churches,” said Strang. “[The Mennonites] don’t believe in vaccination by and large had very low vaccination rate. The ongoing spread in HRM [the Muslims] involves — it’s complex, it’s not just the faith community, it’s more complex.”

“But if you look at the [large number of] regular services at churches, synagogues, mosques, temples, we are not seeing those regular services as any significant drivers of transmission of the virus,” he continued. The vast majority of faith organizations are working really hard to follow the public health rules. There’s been some outliers. We need to deal with the outliers, not not paint everybody in the faith community with the same brush, because the epidemiology does not justify that taking a broad brush approach to this on that.”

There are now 236 known active cases in the province. Seventeen people are in hospital with the disease, seven of whom are in ICU. Thirty-six people are considered newly recovered, which means they are no longer contagious and not necessarily that they aren’t sick. 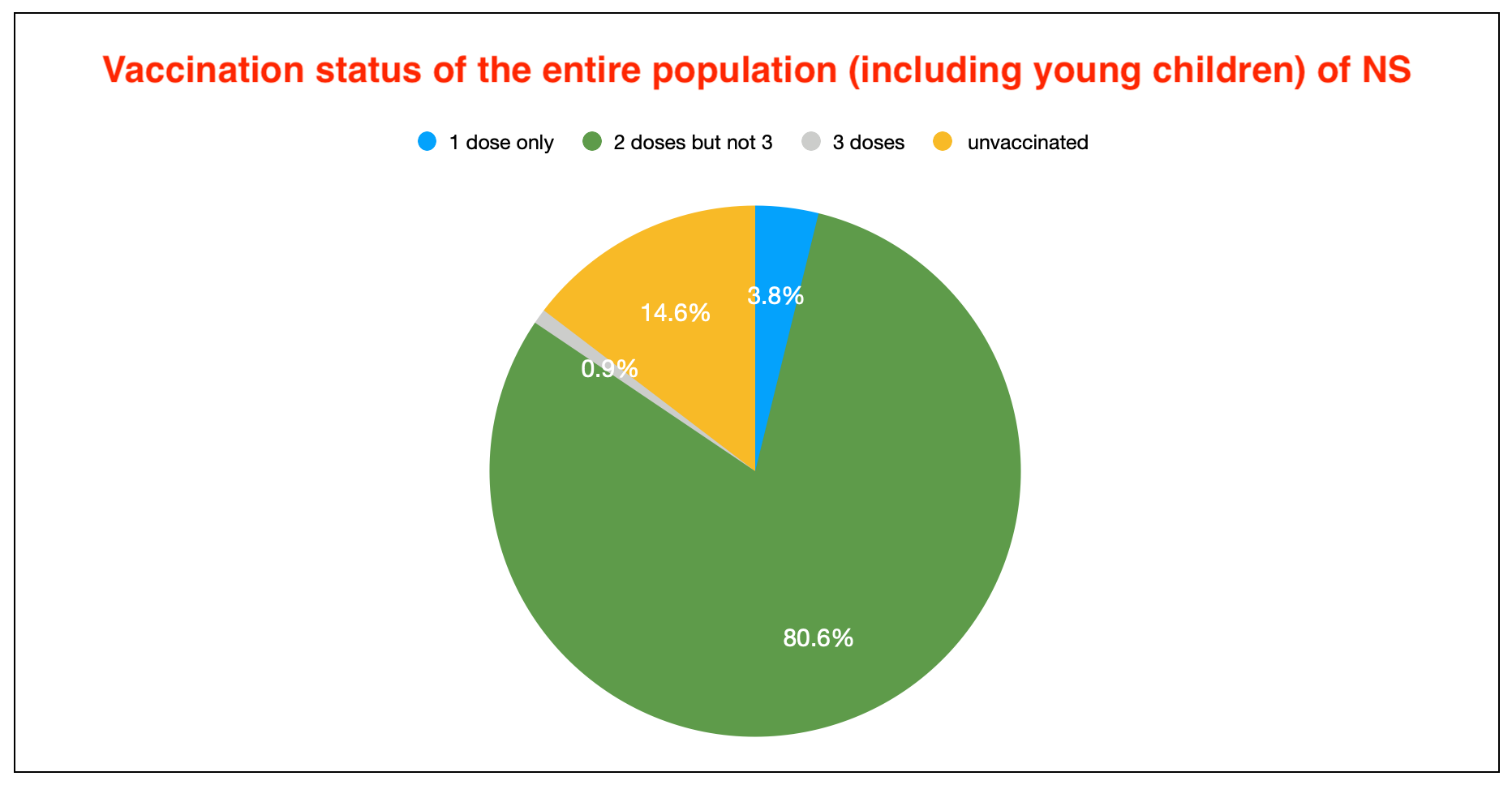 There is a significant one-day increase in vaccination numbers, because the Dept. of Health has added people who received one or both doses of vaccine out of province to the Nova Scotia numbers. Those people began uploading their proof of vaccination on Nov. 4, and they show up today.

Nova Scotia Health labs completed 3,422 PCR tests yesterday. This does not include the antigen tests administered at the pop-up testing sites.

We’ve collected all the active advisories for potential COVID exposures on bus routes and flights here. I’ll be adding schools to the map tonight.