You are here: Home / Featured / Tidal energy investors and fish: the Minas Basin is full of sharks

Cape Sharp Tidal continues to take positive steps in the process to establish ongoing operational control and environmental monitoring of the turbine. Over the weekend a small team of OpenHydro employees with critical technical knowledge required to complete this work arrived in Nova Scotia from Ireland.

Since July 26 when Naval Energies first made its petitions to the High Court of Ireland to liquidate OpenHydro, Cape Sharp Tidal has repeatedly reinforced with the provisional liquidators the requirement to continue environmental monitoring and safe operation of the deployed turbine and the importance of meeting all of Cape Sharp Tidal’s regulatory obligations.

This is mostly damage control and spin. As Jennifer Henderson tells me via email:

The “news” is that a team of former OpenHydro employees who were fired five weeks ago have been summoned from Ireland to oversee the safe operation of a spinning, five-storey turbine abandoned on the bottom of the Bay of Fundy after the French parent company cut off the flow of money on July 26.

Pineau says the team arrived in Nova Scotia last weekend. The turbine is running but not generating electricity, nor is it carrying out the environmental monitoring of marine life that is a condition of its provincial and federal permits.

Pineau of Emera stresses the Nova Scotia partner and minority shareholder in Cape Sharp Tidal continues to try and resolve the embarrassing problem of the massive turbine not being in compliance with rules to monitor the effects of the turbine on marine life (fish and porpoise) at the Parrsboro demonstration site.

Wednesday [today] is the day a couple of OpenHydro founders and newly recruited Chinese investors will attempt to convince an Irish court the liquidation should be halted so OpenHydro can be restructured and pay off $200 million in debts. The proceeding is taking place in the U.K.

Half a dozen Nova Scotia companies are owed $2.5 million.

I’m skeptical that anything much will be done at the Parrsboro site, and especially not if the long-shot bid to revive OpenHydro fails. 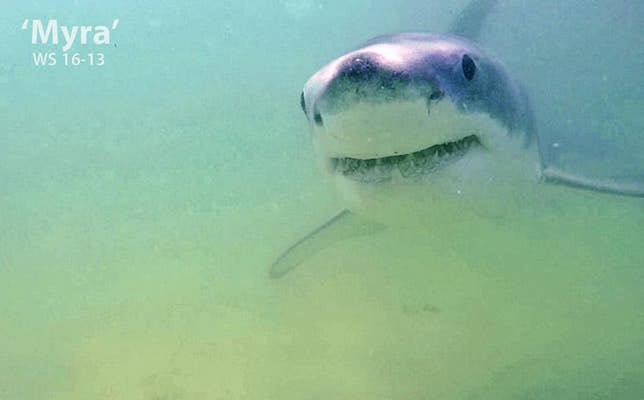 Over the weekend, fisherman Darren Porter sent me the above photo of Myra, a 2.7-meter immature female shark, who was visiting the Minas Basin. Myra joins another female shark, Pumpkin, who is also in the Basin.

Porter uses the Sharktivity app on his phone to follow the sharks around; I’ve added it to my phone as well. Here’s the map of recent shark sitings in the Minas Basin: 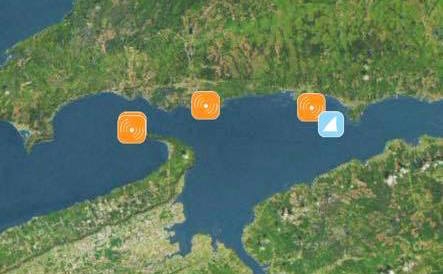 The three orange squares are acoustic detections of sharks; from left to right are a June 11 detection of a shark named Andale, a July 17 detection of Pumpkin, and a September 2 detection of Myra. The blue square is an actual sighting on July 22, with a cool video of an unnamed shark  “trying to steal a fisherman’s catch.” 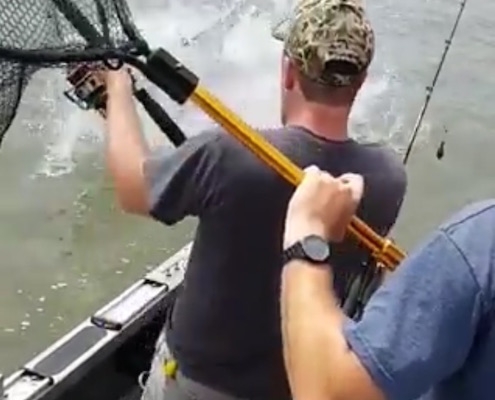 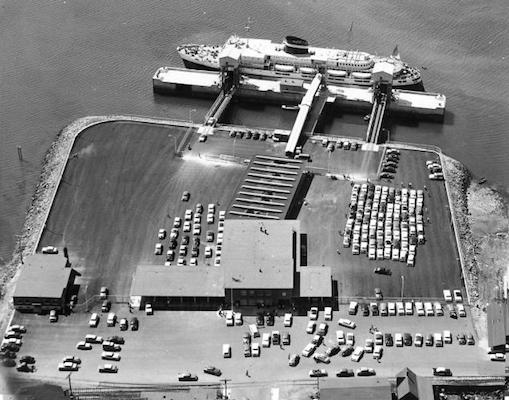 The sunk costs of the Yarmouth ferry continue to pile up, reports the CBC:

The ferry terminal in Yarmouth, N.S., will get a $9.7-million upgrade, thanks to contributions from all three levels of government.

The money will be used to improve and relocate the passenger inspection booths, replace the pontoon and transfer bridge and upgrade the passenger waiting areas and external lighting.

[Zach Churchill, the MLA for Yarmouth] defended the new spending, saying the per-passenger subsidy for the service is the same or lower than that of other subsidized ferry services in Nova Scotia.

“The reason we invest heavily into this infrastructure is because there’s a return on that investment,” he said. “This is like having a highway that connects us to one of the largest tourism markets in the world.”

That last claim is testable, but I’ve never seen the numbers produced (I may have missed them). Just what is the ROI? And show your math: explain how it is calculated, and compare it to other potential returns on investment that would come in by spending the same money on something else.

That aside, having just taken the boat Monday, my experience was that Yarmouth doesn’t much want to profit off ferry passengers. On the boat, I saw no advertising for Yarmouth businesses, nothing that screamed at me: “Eat here when you get off the boat!” After I disembarked and made it through customs by around 10pm, there was no obvious place to eat a late dinner on Main Street. All the restaurants I saw were closed. So I just skedaddled out of town and ate the stale bag of chips in my car for dinner. (The stale chips were more appealing than the over-priced “nachos” on the boat.)

I get that it probably doesn’t make sense to keep a restaurant open until 11pm just for the hope that one or two of the 100 or so passengers on the boat stop by. But if the aim is to help Yarmouth businesses, maybe the sailing schedule should be changed so the boat leaves at something like 8pm and comes back at 5pm. 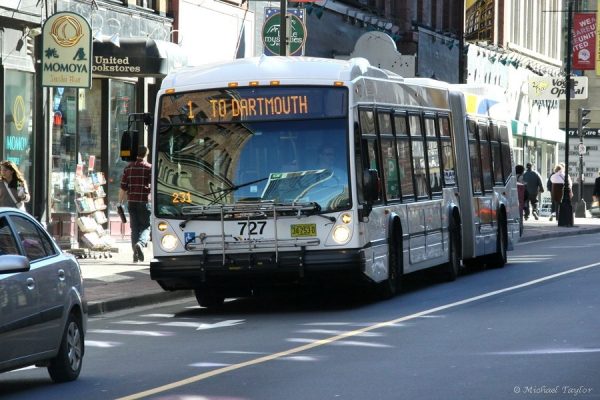 Halifax Transit has issued an Request for Proposal (RFP) for a company that will produce two technical reports looking at how Transit can reduce its carbon footprint.

Halifax Transit’s conventional bus fleet of 338 diesel buses and 2 hybrid buses contribute to the overall output of HRM’s GHGs in the approximate amount of 30,000 eCO2. Therefore, tremendous opportunity exists to reduce HRM’s GHGs by focusing on the Halifax Transit’s conventional bus fleet. HRM has explored the feasibility of both Battery-Electric Buses and Compressed Natural Gas technologies to date by conducting third-party studies. It is the intention of Halifax Transit to explore all other available technologies now that feasibility has been established and compare the implementation of all technologies over a 30-year span (2020 to 2050). It is not the intention of Halifax Transit to only explore the potential for one bus technology in the future, but a combination of these technologies in order to maximize overall benefit.

You can read the RFP here. Scroll down to page 14 for the particulars.

5. Yet another motorcycle death

A collision between three motorcycles has claimed the life of an Enfield man. At 5 p.m. on September 3 [Monday], a lone motorcycle rider travelling East collided head-on with a motorcycle travelling West. The westbound motorcycle was being driven by a sole rider, and behind that was another motorcycle occupied by two people. 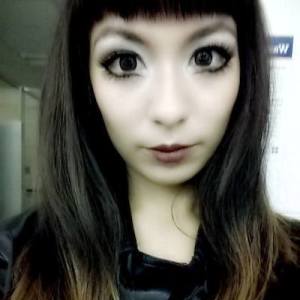 Lindsay Souvannarath “is appealing her sentence of life in prison, calling it ‘manifestly harsh and excessive,'” reports Brett Bundale for the Canadian Press.

Souvannarath, you’ll recall, was part of the plot to shoot up the Halifax Shopping Centre:

The conspiracy can be traced back to December 2014, when Souvannarath and [Haligonian James] Gamble began an online relationship, exchanging explicit intimate photographs and a fascination with mass shootings.

Thousands of Facebook messages between the two provide details of the conspiracy and Souvannarath’s obsession with Nazism, the 1999 Columbine shooting and a plot she nicknamed “Der Untergang” — a Valentine’s Day shooting rampage at a Halifax mall.

The massacre was to end with their own suicides.

Thankfully, the plot was interrupted after some unknown person alerted CrimeStoppers to it, although Gamble did kill himself the night before the planned attack. Another man, Randall Shepherd, was sentenced to 10 years in prison for his role in the plan.

Investment Policy Advisory Committee (Wednesday, 12pm, City Hall) — the term for each of the four appointed citizen members of the committee is over on November 30. Three of the four are technically ineligible to reapply, but that hasn’t stopped them from getting reappointed before. There’s also one councillor on the committee, Russell Walker, and he gets to stick around until the good people of Fairview say otherwise.

Legislature sits (Thursday, 11am, Province House) — pomp! and circumstance! Be there or be… er, not so bored. 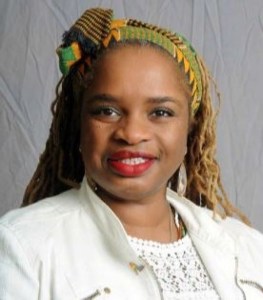 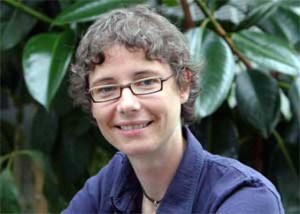 Slow news day. Today, I’ll be attempting to peruse the several thousand emails I got when I was on vacation.

I don’t have a copyeditor this morning; please be kind.