“Halifax police have brought up the idea of reporting suicide statistics as a way to chip away at stigma, and open up a conversation on mental health supports,” reports Haley Ryan for Metro.

As Ryan notes, police calls related to mental health issues were up 26 per cent in May compared to the previous May, “and there was a 28 per cent spike in hours that officers spent monitoring people on Involuntary Psychiatric Treatment Act (IPTA) basis.”

This is not a good use of police resources — even the best-trained cop isn’t a mental health professional.

It’s important we get this right. Reporting on specific suicides can result in “contagion” or copycat suicides. One of the best documented cases of contagion comes from a study of suicides on the Vienna, Austria subway system, which showed that sensational media coverage of the suicides resulted in higher numbers; after guidelines for more responsible coverage were implemented, the numbers fell. Likewise, when celebrity suicides are described in graphic reports, there appears to be an uptick in similar suicides, and very often, when a young person who committed suicide is celebrated on social media, there is a resulting suicide cluster in that person’s community.

News media have therefore adopted strict rules for reporting on suicide — the word “suicide” is not put in headlines, the means of suicide are not reported, the death isn’t glorified, suicide is not expressed as the path to escape troubles, and so forth.

And while such rules are understandable, especially in the wake of some truly egregious and reprehensible media coverage of suicides (the run-up to the thousandth suicide off the Golden Gate Bridge was particularly outrageous), I fear we have gone too far, to the point that we can’t have an informed public discussion of suicide.

It’s one thing to graphically report on a particular suicide, and another thing entirely to provide accurate information about suicides generally.

Suicide is a public health issue, and it should be discussed publicly so that we understand the significance of it and how best to address it.

There are about 100 suicides in Nova Scotia annually, so probably about four or five suicides in HRM monthly. Suicide is the tenth leading cause of death in Nova Scotia. Just knowing those stats gives us some idea of the gravity of the issue and what kind of resources should be put toward it.

Also, the means of suicide matter and should be made public, because means reduction works. It’s not true that a suicidal person will “just find another way” if we take away one method of suicide. The suicidal moment is often fleeting — a person could be suicidal for a night, or a week, or a month, but then never again; if we can keep the person safe in that short period, we can prevent the tragedy and move on to treatment.

So far as I know, stats on the means of suicide are not publicized in Nova Scotia. I know that in the U.S., the overwhelming method of suicide is by firearm, and so people who have a suicidal person in the household are urged to restrict access to firearms. This is not an anti-gun position; it’s just saying if you know someone is in a crisis, keep them away from guns until the crisis is resolved. Similar means restriction applies to prescription drugs and over-the-counter medicines.

I suspect that something like a  quarter or a third of suicides in HRM were jumps from the Macdonald Bridge. The erection of the suicide barriers didn’t entirely solve the problem — some portion moved over to the MacKay, and some people have probably managed to climb over the barriers — but the barriers did serve to drastically reduce the overall numbers, and many of the potential suicides went on to get help and become healthy, contributing citizens. People, lots of people, are alive today because of those barriers. But it took public discussion of the problem to get the barriers constructed.

We don’t want or need a detailed description of each suicide. But providing statistics that allow us to analyze the problem is the first step towards improving public health. 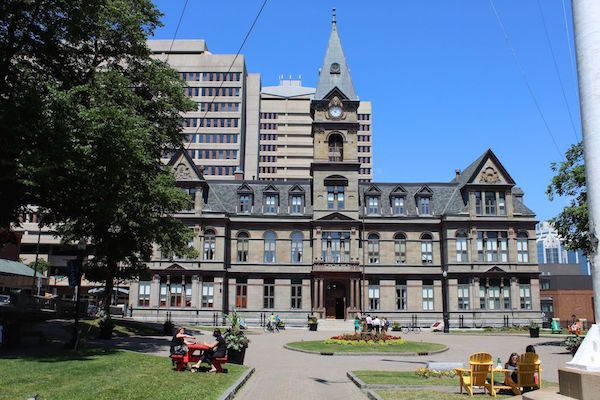 Halifax council yesterday agreed to a staff recommendation to form a “cross departmental working group” to study various changes in procurement policy that among other things may one day result in a living wage policy.

I’m dubious and frustrated — I think council should just implement the policy and be done with it. There’s no need to reinvent the wheel on this; plenty of Canadian cities and other jurisdictions already have living wage policies, and we can simply take their ordinances and policies and apply them here. The “working group” feels like unnecessary delay, meant to tire out living wage advocates, and CAO Jacque Dubé put the kibosh on any notion that a report can come back before the 2018/19 budget is adopted 10 months from now. Maybe it can be done in time for adoption of the 2019/20 budget. How many hundreds of working people are condemned to two more years of poverty because of the delay?

But some councillors see the working group as a success. Waye Mason told me that it took the city of Toronto four years to develop its living wage policy, so to get Halifax on a two-year track is a victory. I don’t know. Can’t we just take Toronto’s policy as the basis for constructing our own? The living wage advocates in the gallery seemed likewise frustrated, albeit optimistic that something one day will be done.

Meanwhile, parents working for contractors employed by the city can’t be with their children tonight because they have to work a second job to make ends meet.

In other action, council approved a temporary (three year) stadium for the Wanderers Grounds. The deal allows Sports Entertainment Atlantic to construct a 7,000-seat stadium and put on up to 14 soccer matches a year. The stadium will be controlled and managed by the city. Mason amended the motion with a series of other restrictions that were agreed to by SEA. 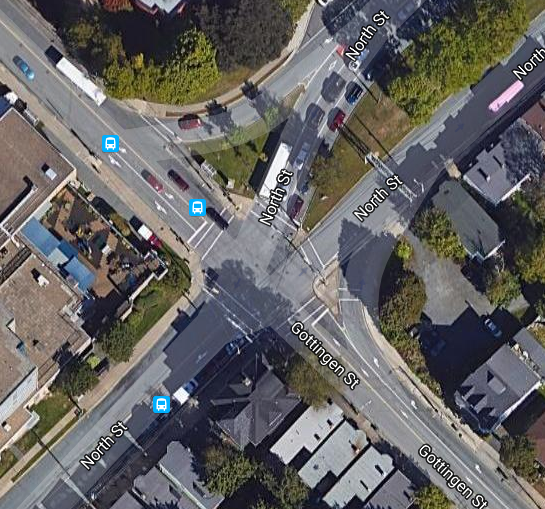 Sometimes also known as slip lanes, channelized right turns help right-turning vehicles essentially by-pass the traffic control at an intersection. In doing so, they create extra islands for pedestrians between the newly created lane and the main intersection (sometimes referred to a pork chops, because of their shape). Channelized turns tend to speed up traffic, which is exactly what they’re designed to do: increase the capacity of a road by moving vehicles through intersections faster.

But vehicle traffic gain brings pedestrian pain. Not only do pedestrians have to zig zag their way across the street, but they will find themselves crossing roads where vehicles are moving fast and not even required to stop. It can be nerve-wracking and dangerous.

The removal of channelized right turn lanes has not only the potential to make pedestrians safer, but it could also help the transit system be more reliable. Queue jump lanes are short dedicated bus lanes around intersections that help get buses through traffic faster, and the space required for them is similar to that required for some channelized turns.

Click here to read “Turning the corner on street design.” 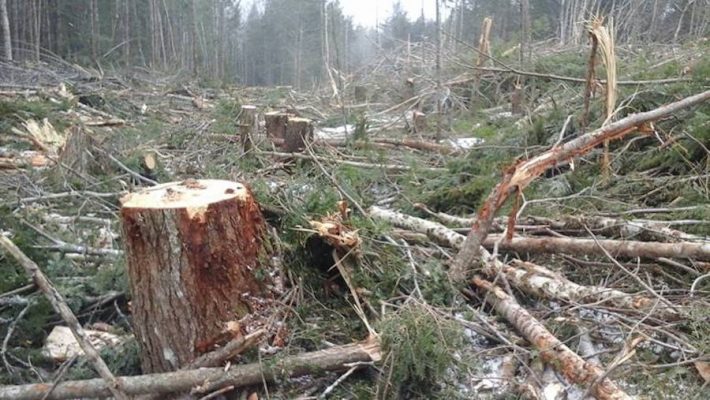 In a piece for Local Xpress, journalist Joan Baxter looks at a massive clearcut now underway in the Wentworth Valley and details how provincial policies and inaction are threatening surrounding forests.

I don’t know how to date the birth of the Examiner exactly. I launched the site with the above video on June 18, 2014 (I look so young and rested!) and made a short post (I think about the convention centre) two days later, on Friday, June 20. The first Morning File appeared on June 23. Maybe I should’ve noted this on Sunday (the 18th), but I was out of town.

Were the Examiner to collapse today (it won’t), I’d feel like we’ve accomplished a few things. Top of the list is the Examiner has provided a platform for some talented and important voices: El Jones, Erica Butler, Linda Pannozzo, Stephen Kimber, Jennifer Henderson, Evelyn White, and others too numerous to mention. Also, the Examiner has given some work to the unsung heroes of this operation: Iris, Tempa Hull, Russell Gragg, Mark Pineo, and various contractors and professionals no one knows about. I can’t judge my own work, but if I’ve been successful, it’s been to expand community conversations about important issues or into issues that weren’t being discussed at all.

I haven’t found the time to plan a birthday celebration. I’ll get on that, though, and next month we’ll have an afternoon of fun. You’ll be invited.

Over the course of the summer I hope to finish and publish some bigger projects I’ve been working on. I’ll be taking a proper two-week vacation in September, which should recharge my batteries a bit. In the long run, however, I need to hire someone to help carry the load. That of course will take money, which comes from subscriptions… so, er, a great birthday present would be to subscribe. 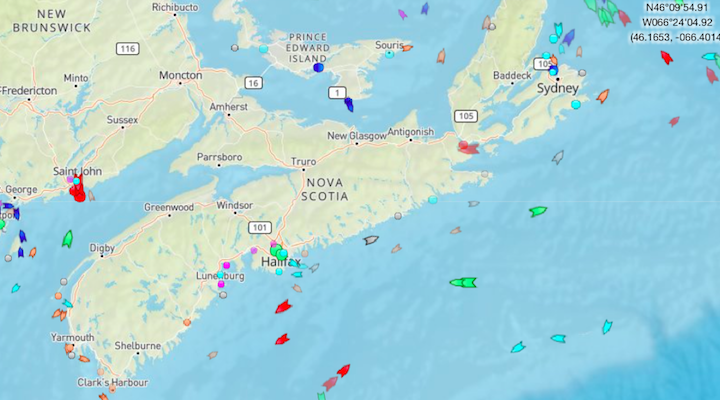