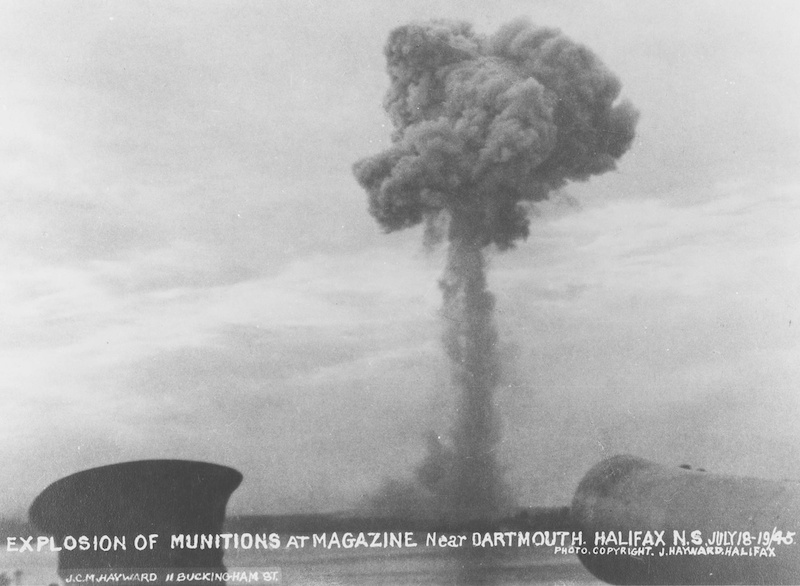 One of the Magazine Hill explosions of 1945.

Three unexploded bombs were discovered at a construction site in Burnside Industrial Park yesterday. The bombs were probably deposited at the site during the massive explosions at Magazine Hill on July 18, 1945.

…at about 6:30 PM, the calm was broken by a tremendous and earth moving flash and explosion.  What was once the Depot was now a mushroom cloud pillowing up to the heavens.

Ammunition and small explosives “pickled off” throughout the night and by midnight the “show” seemed to be over.  A final bright and loud explosion almost precisely at midnight announced the end of the display.

The final report on the explosion stated that a fire, of unknown origin, which started on the  dock, had spread to the ammunition depot.  Although there was only one casualty (a workman who was on the jetty at the time of the first explosion) and very few injured, the explosion brought back dark memories for the local population.  It was reported that up to 15,000 people in Halifax and another 10,000 in Dartmouth spent the night in parks, well away from the effects of the explosions.

But it could have been worse as some 50,000 depth charges were reportedly saved from the fire.

Imagine how frightened the survivors of the 1917 Explosion must have been in 1945.

Ron Folkins, commander at the Magazine Hill ammo depot, told the CBC that he’s called out three or four times a year to deal with unexploded bombs.:

“The furthest one I ever heard of being found was when they put in the foundation for Mic Mac Mall,” about nine kilometres away, Folkins said.

This city has had two major issues with military armaments—The Explosion of 1917 and the Magazine Hill Explosions of 1945. Making Halifax Harbour a nuclear-free zone is not just a symbolic gesture. 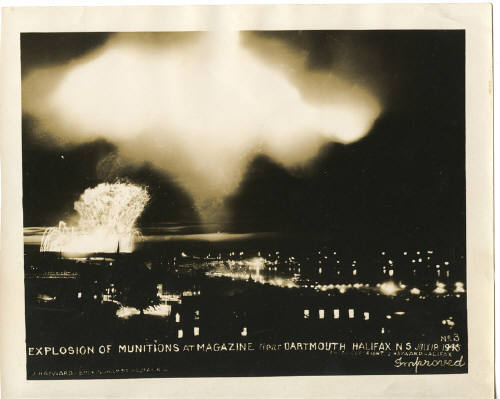 The city has asked the court to intervene in Halifax police sergeant Robyn Atwell’s hearing before the Human Rights Commission. The merits of Atwell’s case aside, we’re entering dangerous territory when employers attempt to side-step the human rights commission.

While it’s great that Cape Bretoners can enjoy a big-name rock show, I can’t help but wonder how much public money went into the Aerosmith concert at Sydney’s Open Hearth Park, and how much will be recouped. When the show was announced in April, promoter Alex Martin said he expected to sell 20,000 tickets. Reported attendance at the show yesterday was 15,000. We know that attendance is very often over-reported, and no one is saying how many tickets were give-aways. This is the Harold MacKay strategy of concertizing.

4. The right to park exactly in front of where I’m going

Bryan Crocker, who is the principal conductor of the Dalhousie Health Professions Choir, complains that the proposed bike lane on University Avenue will make him walk a few steps more to get to the Rebecca Cohn. Next, the Health Professions choirist will demand smoking be allowed in the theatre.

A rope attached to some unknown object was caught up on a humpback whale off Cheticamp, slicing the creature’s tail. A DFO crew successfully removed the rope, the CBC reports.

The merging of health districts will become politicized because it hits the rural/urban divide, says Graham Steele. Along the way he makes a fewer/less error.

Darce Fardy continues his journey into dementia with humour and good spirit. And exercise.

Prompted by my story yesterday about the ridiculous interaction I had with federal officials at a meeting on open government, Paul MacLeod relates his own experience with PR for PR’s sake, and concludes:

There’s no logic to the cult of PR anymore. It just runs on its own steam now, even if the person practicing it is only hurting themselves.

Here’s the EU’s map of passenger train service in Europe: 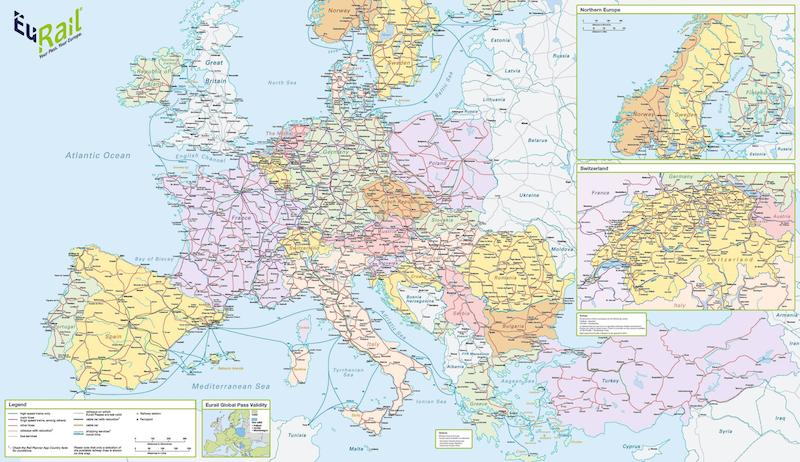 And in the US:

Atlantic Lottery has issued a tender for stand-alone “instant ticket vending” machines that will issue lottery tickets without the intervention of a store clerk. The machines will verify the purchaser’s age via a driver’s licence scan, which presents obvious problems, but what the hey, maybe one day soon it won’t take half an hour to buy bottle of aspirin at Shopper’s.