You are here: Home / Featured / There’s a cool comet up there but it’s too cloudy to see it: Morning File, Wednesday, January 4, 2017 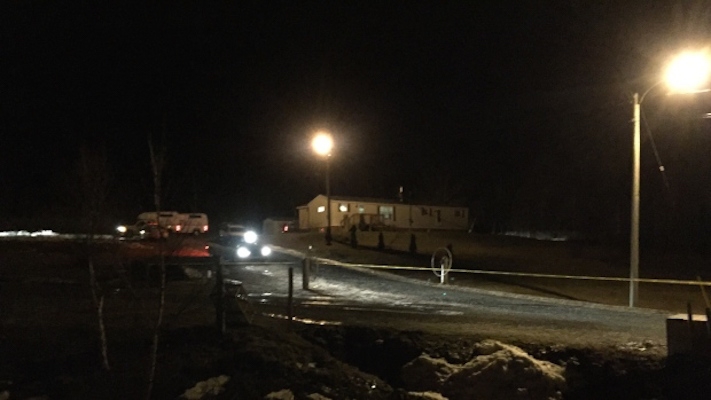 The CBC published this photo of police at the scene of the house where four people were found dead. The network repeated an incorrect police report that the house is in Upper Big Tracadie; Local Express reporter Ian Fairclough explains that the house is actually in Lincolnville. Photo: Steve Berry/CBC

Police said in a release the deceased were found in a home in Upper Big Tracadie, but area residents say the residence is on Highway 16 in Lincolnville, a small community that borders with Upper Big Tracadie near the boundary with Antigonish County.

Cpl. Jennifer Clarke said police were called at about 6 p.m. and found all four victims inside the residence. She couldn’t say who made the call to police, or how long the people had been dead.

“It’s pretty early for that kind of information,” she said. “Everything is very preliminary right now.”

[Guysborough]* Warden Vernon Pitts said he had only been briefed by the municipality’s CAO, but was waiting to hear from the RCMP.

“My understanding is there has been a tragedy in the community of Lincolnville… There were four fatalities, as of yet I don’t know what happened,” he said. “I’ve heard rumours, but I’m not willing to speculate until I hear from the RCMP.”

He said he hopes to be able to work with local MLA Lloyd Hines to arrange for grief counsellors to be sent to the area.

“It’s going to shake the community severely,” he said. “I think it’s imperative that we get grief counsellors in the community as soon as possible.”

* When I initially published this, I incorrectly wrote that Pitts was the warden for Lincolnville. 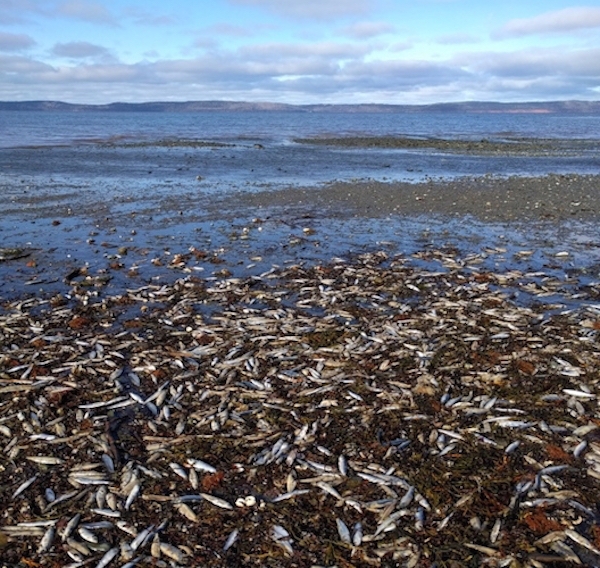 “An ocean scientist at Dalhousie University in Halifax said the lack of disease or viruses in tests from the fish kills, combined with herring being observed in areas they wouldn’t normally be seen this time of year, suggests a larger environmental issue,” reports Preston Mulligan for the CBC:

“What really is unusual about this area is that the Gulf of Maine, as a whole, has been warming more rapidly than almost about any other area on the planet,” Boris Worm told CBC’s Mainstreet.

“It’s in the upper one percentile … It’s the outlier, if you will.”

As temperatures warm and animal behaviour changes, Worm said it’s a sign of “a larger story here about how the environment is changing.”

There is some evidence, some satellite pictures, that at the time that these die-offs started in November, there was an unusual plankton bloom in the area, probably linked to warming waters. 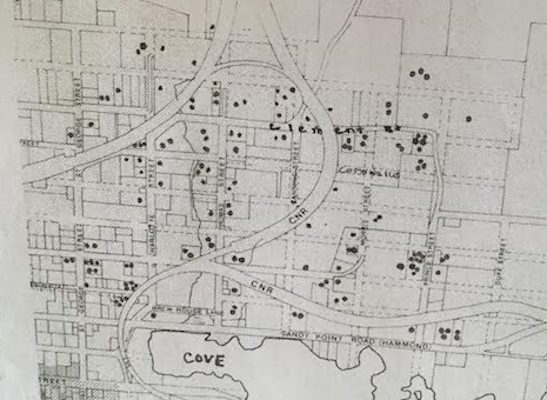 This map, compiled by residents, shows South End Shelburne households where people have died of cancer. via Nova Scotia Advocate

“Black residents of the Town of Shelburne who live in the so-called South End neighborhood are worried about the effects of a nearby landfill on their health. They want the town to come to their support,” reports Robert Devet in his Nova Scotia Advocate:

For 75 years the Shelburne Town Dump received industrial, medical and residential waste not just from the town, but also from Lockeport and all of eastern Shelburne County. Waste came from households, a former naval base, a hospital, and an industrial park.

In the early nineties the landfill as such was closed, but it continued to be used as a transfer station for things like fridges, stoves, and empty oil barrels. Enforcement was lax.

For decades South End residents lived with the smoke from the waste being burned there, rats, and most of all, fears that the dump was contaminating their dug wells and affecting their health.

The two closest homes are within 250 feet, many more are within 500 feet. The neigbourhood is on a boggy downward slope from the landfill. Three brooks descend from the dump into Shelburne Harbour, crossing many South End properties.

“People would dump animal parts. When the hospital dumped something there always was a fire. They always tried to burn whatever they dumped there. The fire would get underneath, and it would burn underground,” says [Janet] O’Connell.

About ten years ago [Louise] Delisle was involved in a study looking at health-related issues facing Black women in rural Nova Scotia. At that time she interviewed the African Nova Scotian women who lived in her town.  The dump was the number one concern the women raised, she says.

“The community now is mostly women left over. There are very few men left. They died of cancer. I highly doubt that there will be similar numbers in the downtown or in the North End,” says Delisle. “And 99.9% of the women who are ill blame it on the dump.”

“The husband of Nova Scotia Immigration Minister Lena Diab has been charged with assault and uttering threats against the cabinet minister in relation to a New Year’s Eve incident at the couple’s Halifax home,” reports Paul Withers for the CBC:

Lena Diab and two others were identified in court documents as the alleged victims. Maroun Diab was arraigned Tuesday in Halifax provincial court and will remain in custody until a court appearance Thursday.

Maroun Diab, 58, is accused of attempting to choke Lena Diab by putting both hands around her neck, assaulting her and threatening to cause her bodily harm or death.

The Canadian Press adds some personal details about Lena Diab:

Diab, a lawyer and business owner, was appointed Nova Scotia’s first female justice minister after winning office in October 2013 in a Halifax-area riding.

A Nova Scotia native who moved to Lebanon at the age of two, she returned to the province nine years later to escape civil war, according to her official biography.

She was the first female president of the Canadian Lebanon Society, and speaks English, Arabic and French. She leads the province’s Syrian refugee effort, according to her bio.

She has four children and one grandchild.

1. Streets are for everyone 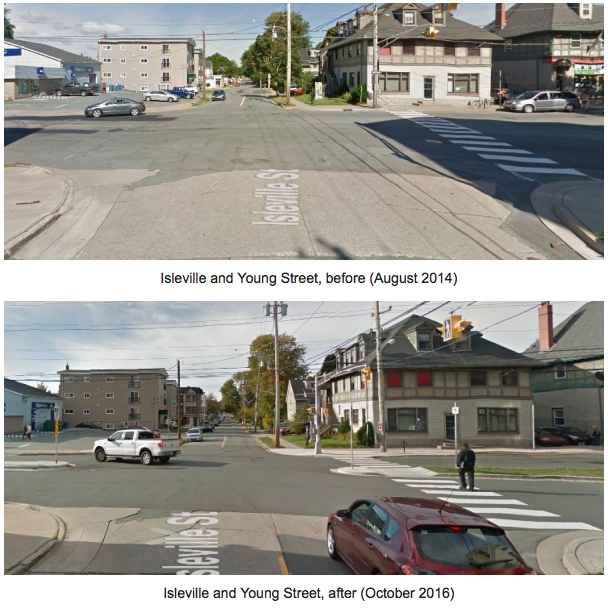 “When the intersection just to the west of the Hydrostone Market block came up on the road resurfacing schedule a couple years ago, instead of just the typical ‘shave and pave’ from the city, the absurdly wide crossing got an upgrade of a different sort,” writes Examiner transportation columnist Erica Butler:

Thanks to a backlog of complaints on file, the city decided to make some improvements to help pedestrians get across Young Street at Isleville more safely. “We ended up with a refuge median and some curb extensions,” says David MacIsaac, the Transportation Demand Management Program Supervisor at City Hall. “Instead of a 22-metre crossing, it’s two five-metre crossings.”

One curb extension at Isleville and Young may seem like a small step, but the way of thinking that brought it about could mean a giant leap, eventually, for walkability in our fair city.

Going through articles in the Chronicle Herald over the last couple of months written by either DNR officials or by others in the forestry industry, I am reminded of the well known literary quote, “Methinks thou [doth] protest too much.”

We had the minister, Lloyd Hines, Jeff Bishop, Cliff Drysdale, Kim Fuller, et al. expound profusely about the wonderful forest “management” strategy put forward by DNR and the forest corporations. They call their policies “science-based” yet, when asked to produce peer reviewed scientific evidence to back their policies, they are not forthcoming. Then, they revert to downplaying the expertise of those who oppose the way in which the industry is decimating the forests (with the blessing of those in the DNR).

Also, they use the tactic of negatively labelling those opponents as did Mr. Eddy in Truro when he called those opposed to clearcutting “peacocks puffing themselves up for show” or Ms. Fuller calling them “pessimists standing in front of every industry they perceive as not fitting their narrow vision for our resources,” or the Harper government calling them “environmental terrorists.”

These people ignore the wealth of research on the other side done by scientists and forestry researchers from all over the world (peer reviewed and supported). They ignore the evidence of Global Forest Watch as to the level of destruction done to the forest when clearcutting has taken place.

At recent meetings in the western part of the province and in Cape Breton, NASA slides showing clearly the difference in clearcutting from 2002 to 2014, were seen by people in both the DNR and the forestry industry. Yet, this is totally ignored. It is as if they closed their eyes when the slides were presented.

Also, the supporters of the present “management strategies” never talk about how the forest floors are destroyed by the big machinery; how the wildlife is endangered; how the forests which replace the healthy forests are not of the same quality as that which has been lost; how the “regulations” restricting the cutting close to waterways are being ignored without penalty; or how the nutrients which formerly fed the new forests are now carted away to be used in biomass plants either here or overseas.

A friend has compiled a 500-page book covering all these topics. The research he has compiled comes from all over the world. Personally, I have given the former minister of natural resources an 80-page paper on the dangers of biomass burning. I indicated to him that this paper by Dr. Mary Booth, an expert in the field, was extremely informative, but because I knew how busy he was, that if he read five pages which I wrote on the cover, he would see how terrible this practice is to the environment. Yet, nothing changed.

The evidence is there to support our argument against clearcutting and all we need to do is to drive along any major highway to see the scrawny, low-quality forests which replace the old forests, (which, by the way, are far better at taking carbon out of the atmosphere and reseeding the surrounding areas). After a second clearcutting, the quality of the replacement forest is even lower. And these things we can see for ourselves. We don’t need to listen to either side of the argument. We just need to be observant.

As I read the local papers around the province, it strikes me how many people in rural areas still read the Chronicle Herald. Here, Harpell clearly understands that the Herald is being used by the provincial government as a propaganda tool against him, lying to him, and yet he continues to (presumably) purchase it and read it regularly. 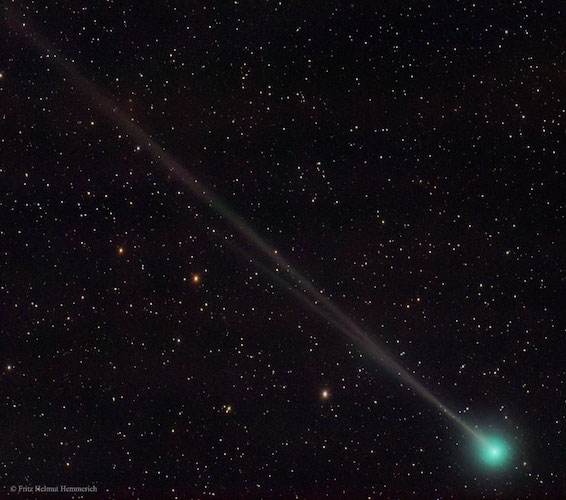 If we lived somewhere without constant cloud cover, we could look with a pair of binoculars right after sunset and see this comet, named 45P/Honda–Mrkos–Pajdušáková, near the planet Venus (that’s the bright one). The comet, which loops by the sun every five years or so, was discovered by Japanese astronomer Minoru Honda in 1948. I don’t know who Mrkos and Pajdušáková are. More on the comet here.

We’re getting dumber by the day. 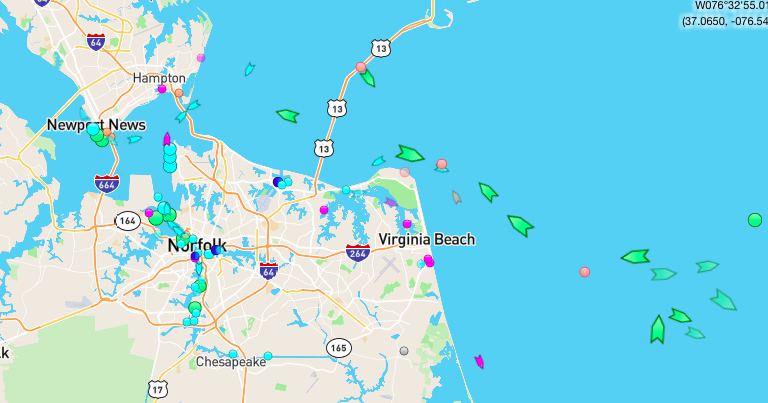 Hampton Roads and its approach this morning. Map: marinetraffic.com 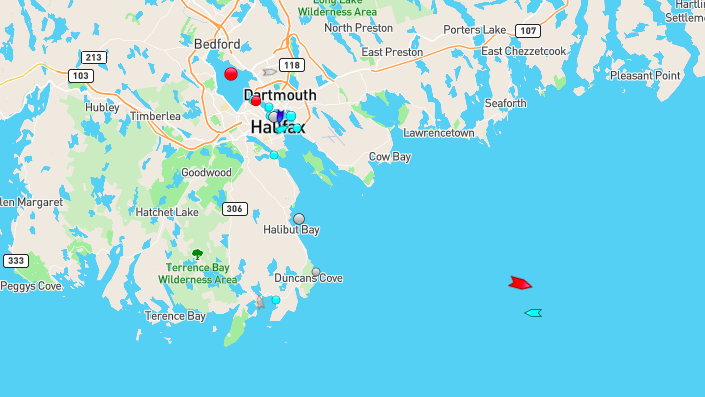 Halifax Harbour and its approach this morning. Map: marinetraffic.com