You are here: Home / Commentary / The value of a tweet: CIBC’s campaign for the Run for the Cure

The CIBC is positioning itself as a responsible corporate citizen. Why, just ask them.

Monday, it embarked on a Twitter campaign to raise money for the Canadian Breast Cancer Foundation. The company initiated the campaign with this tweet: 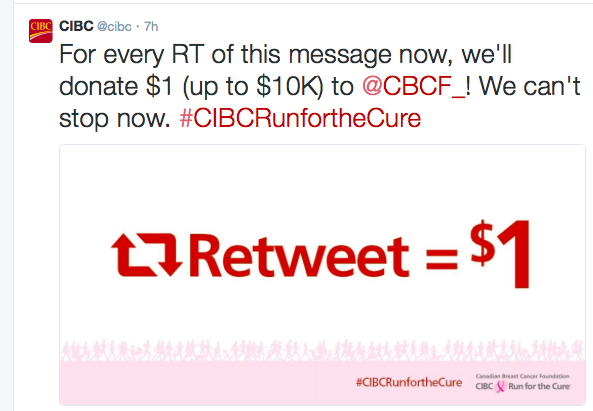 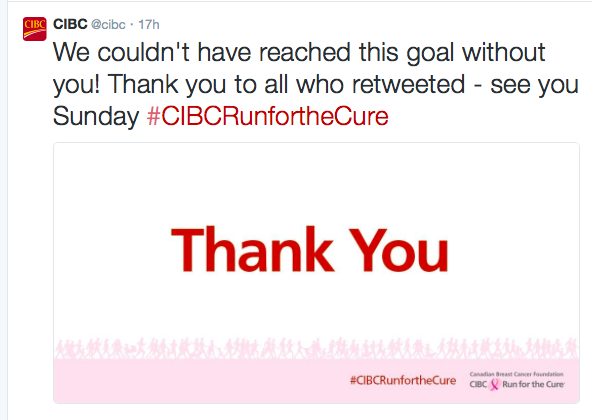 Money for charity. What could possibly be wrong with that?

CIBC Run for the Cure

The CIBC Run for the Cure is, obviously, a charity branded by CIBC. The run is a project of the Canadian Breast Cancer Foundation.

Last year, CBCF raised a total of about $48.8 million, with the bulk of that—$29.5 million, or 57 percent—coming through the CIBC Run for the Cure. Neither the charity nor the bank publicly specify how much CIBC has contributed to CBCF, but total corporate donations to CBCF were $7.3 million.

According to the Canada Revenue Agency, expenses at the CBCF break down as follows:

Because of the low percentage CBCF spends on charitable work, MoneySense last year gave the CBCF a “D” grade in program efficiency, albeit CBCF’s overall grade was a B, thanks to A+ grades in both governance—judged on answers to a questionnaire—and reserves—based on keeping a healthy percentage of its operating funds in reserve in case donations dry up.

Mark Blumberg, of Canadian Charity Law, has a nuanced discussion of charities’ fundraising and administrative costs, explaining that it’s not as simple as drawing conclusions from percentages—high administrative costs could be dictated by circumstance, or indicate that a charity is doggedly making sure that all funds are accounted for.

In CBCF’s defence, the nature of CBCF’s work may necessitate high administrative costs. The charity is not just in the business of raising money—it is also trying to raise broad awareness of breast cancer as a problem that needs addressing. For that reason, events that involve a lot of people getting involved, even if getting those people involved is expensive, serve the organization’s goals of increased awareness. And the CIBC Run for the Cure certainly gets a lot of people involved. Besides the runners themselves, the runners get others involved through sponsoring their runs, and the runs are colourful events that draw the attention of passersby.

A bank, of course, is in the business of finding value.

Unfortunately, CIBC did not respond to a detailed list of questions from the Examiner concerning the Twitter campaign in support of the CIBC Run for the Cure, so we don’t know how or why the bank values the CBCF over other charities with lower administrative costs.

Of course, if the bank values CBCF’s social awareness purpose in and of itself, the charity would be a worthy target of CIBC’s philanthropy. But if the bank’s primary interest were advertising, rather than the end result of contributing to charity, it would make sense to fund a relatively inefficient charity that involves a lot of people over a more efficient charity that involves fewer people.

Possibly the two aims coincide: why not support a worthy social awareness campaign and get some increased advertising value from it along the way? There’s no question that the Twitter campaign benefits CIBC’s branding campaign to position itself as a socially conscious corporation. The Twitter campaign gets people involved by retweeting CIBC’s message and perhaps increasing the retweeters’ followers’ awareness of breast cancer. It also gets the CIBC name retweeted and associated in a positive light with a charity, so serves an advertising purpose.

But what’s the value of a tweet, or in this case a retweet? That’s an astonishingly difficult question to answer, apparently. I contacted two “social marketing” experts who are widely quoted in the national and international press to ask them how they would value CIBC’s campaign, but neither responded.

Here’s my back of the envelope calculation: With 10,000 retweets, and guessing that each retweeter has an average of 1,000 followers, CIBC’s campaign resulted in 10 million potential views, so each delivered tweet cost one-tenth of a cent ($10,000 divided by 10 million). In reality, the cost would be even lower, because the company exceeded its goal.

What literature I’ve looked at has valued a single tweet or retweet at anywhere between one-half a cent to three cents. So, I thought, had CIBC run a campaign with the same advertising potential but not tied to the CIBC Run for the Cure, it would have cost anywhere from five to 30 times more than the Run for the Cure campaign. Put another way, the bank saved a lot of money on an advertising campaign by tying it to a charity.

I ran that calculation by Jeff White of Kula Partners, an internet marketing and web design company based in Halifax, to see what he thought.

“I’ve been calling out companies that do this for as long as I can remember,” said White via email. “It’s the most selfish way to give. ‘If we get all of this free advertising, we’ll donate a pittance to this charity.'”

White’s quick to say that his calculations are at best theoretical, because no one knows the true value of a tweet, but he views CIBC’s campaign even more cynically than do I:

In the media industry, an ‘earned’ mention is calculated as number of agate lines or column inches and multiplied by three. So if an article was written about Kula Partners that took up a quarter page of newspaper space, and an ad that size would be sold for $1,000, the total ‘value’ due to the goodwill generated by a media mention to Kula would be $3,000.

I suppose you could look at the cost of a promoted tweet as a unit of measurement and then use a similar multiplier to show the value of the goodwill of all of those retweets. I did a little looking and it seems like a promoted tweet costs from $0.20 to $5.00. You actually bid on keywords here, which makes them a bit different from a RT.

So even if you said that a RT was only worth half of a promoted tweet at $0.10 (which doesn’t even take into account the goodwill multiplier), and CIBC got 10 million impressions, that has significantly more value than the $10k they donated.

White doesn’t state the number directly, but by his calculation, CIBC got an advertising campaign valued minimally at $1 million for just $10,000, all thanks to a Twitter audience willing to retweet the bank’s message for free.

“So yes, in my opinion, they’re gaming social media for corporate gain,” says White. “And the clueless sheep are playing right into their hands. It’s not creative, it goes against the connective nature of social media and it’s all about greed—never about the actual non profit or charity who need the cash.”

“I really wish this practice would stop,” he continues, “and that corporations would just donate because they truly believed in it, rather than using it as an advertising ploy. But no, because greed.”